Before presidential candidates and their supporters filed into Wells Fargo Arena Friday night for the Iowa Democratic Party Liberty & Justice Celebration, rallies were held close by to pump up the crowd for the biggest event of the primary season.

Starting Line fanned out around town to bring you an up-close look at the action. Here’s our dispatch:

Warren was one of the few candidates slated to speak at the LJ who didn’t have a pre-event rally or event scheduled.

So, when the Iowa frontrunner rolled up to 3rd Street in a grey minivan — her transportation of choice while in the state — supporters and organizers began to shriek and cheer in their mint green outfits, accessorized with face glitter and fanny packs.

Chants included “It’s Time, It’s Time, It’s Time for a Woman in the White House,” and “Outwork, Out-organize, Outlast,” among others, as the candidate stopped and gave hugs and a few words to nearly two blocks of supporters lining the street. 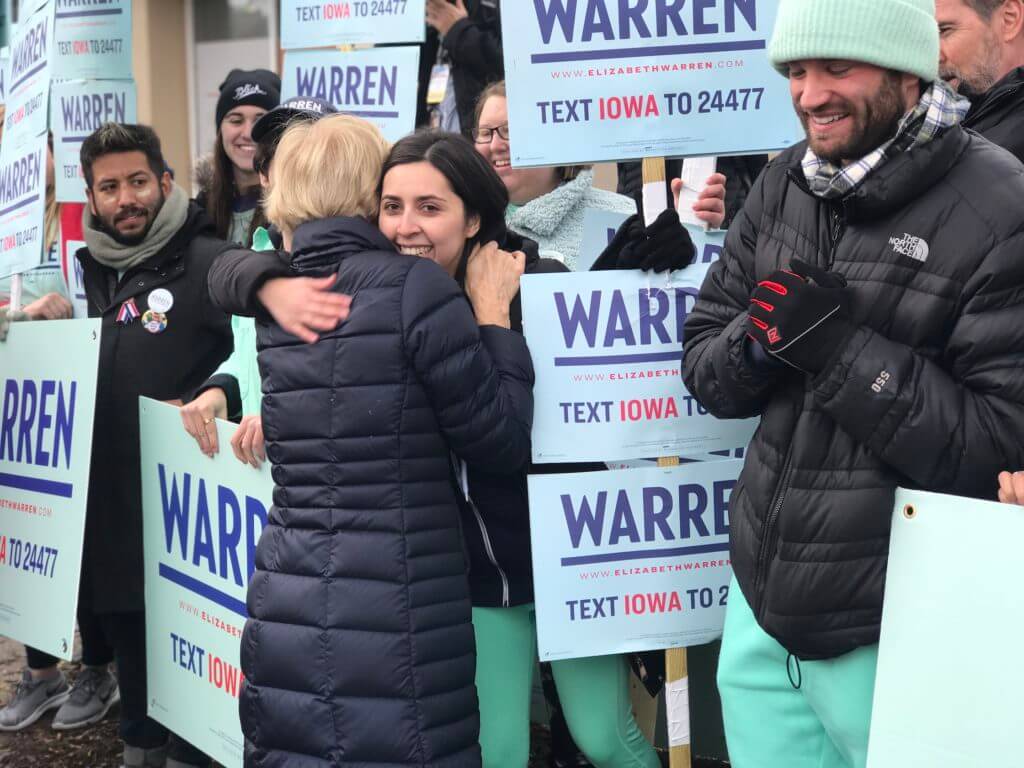 Warren was also escorted by a mascot cougar as she neared the multi-foot-tall inflatable Golden Retriever — a nod to her beloved dog Bailey — waiting by her rally space. The dog’s collar displayed two pennies, a show of support for her 2-cent tax plan on America’s wealthiest citizens. She then spoke to media after the heartfelt welcome from organizers and staff.

Early this morning, Warren released her plan to finance Medicare For All. The candidate had promised to roll out a plan detailing how her administration will afford universal health care coverage after facing heat from competitors on the debate stage.

She took time at her rally to specifically respond to former Vice President Joe Biden’s quip that her health care plan was “mathematical gymnastics” and “impossible to pay for without tax increases.” 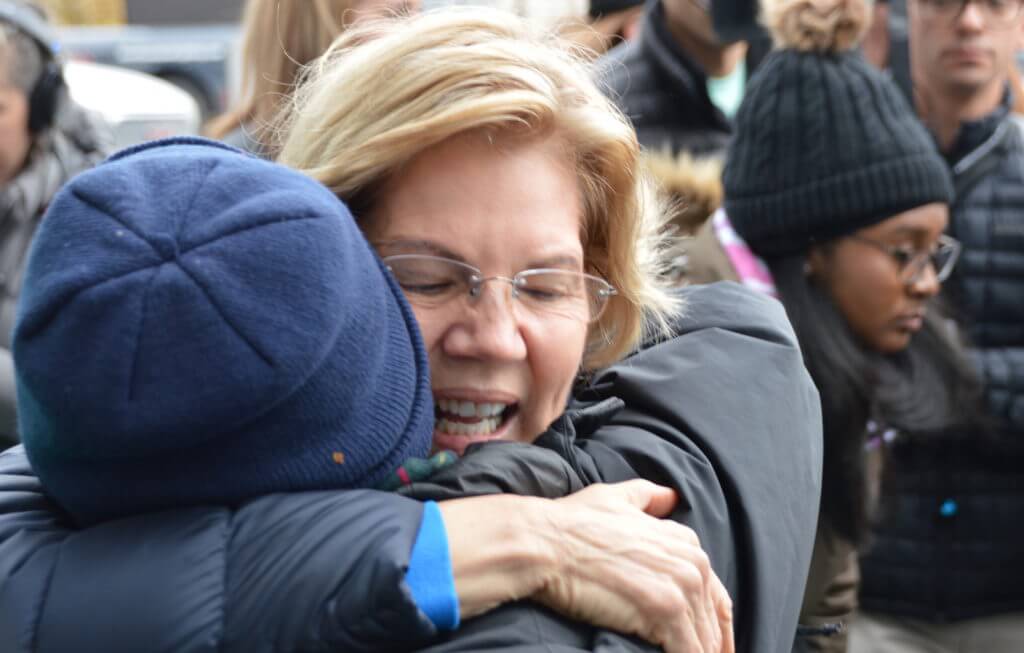 Hundreds of Andrew Yang’s supporters braved the rain for hours on a 43-degree day at Brenton Skating Plaza.

Many were dressed in their signature navy blue baseball caps and holding YangGang signs as entertainers Weezer and Chefzoot hyped the crowd.

On stage, Yang gave himself props for attracting so many disaffected Trump voters — claiming they count double since they’ve migrated back to the party.

He also gave a shout-out to his Independent and Libertarian voters and the people who didn’t care about politics until they met him.

Yang was met with loud cheers from his rowdy audience of hundreds after calling out each group.

Scholten was also scheduled to speak at events for Klobuchar and Buttigieg. He has not endorsed a presidential candidate.

A steady stream of supporters filtered into Delaney’s event this afternoon inside Buzzard Billy’s, a sports bar a few blocks removed from the LJ.

The former congressman’s party offered free food and beer and a warm place to dry off from relentless rain in Des Moines. It was the perfect place to wrangle a bunch of undecided voters.

Hannah Gebhart and Kasie Krehbiel said it was an ideal stop for a quick drink on their mission to hang out with all the candidates. Unsurprisingly, the two said they met Delaney more than two years ago when he stopped in their office. The pair work for John Norris, a former gubernatorial candidate and small business owner.

While the three were undecided about who to support for president, they liked Delaney’s practical approach to fixing health care and the environment.

The women described Delaney as “reasonable” and said he has a “good grip on reality.”

Delaney has spent more time in Iowa than any other candidate this election cycle. His appearance at the LJ marks his 39th trip to the state.

Delaney spent time at the party drinking a beer, chatting with his supporters and visiting with members of the media.

Buttigieg held his pre-scene party at the downtown Cowles Commons in front of more than 2,300 people.

Supporters gathered in the area with signs, shirts and lots of enthusiasm while the rain drizzled.

Among his supporters were two inflatable T-rex, Californians — one of whom knitted her own swag — and lots of yellow-and-blue-striped overalls. Near the edge of the Commons, Buttigieg had repurposed an ice cream truck, the Pete Mobile, to sell merchandise.

Before Buttigieg took the stage, Scholten addressed the crowd and singer-songwriter Ben Harper played. The song included lyrics calling for Pete to “take the lead.”

At 4:20 p.m. Buttigieg arrived at the Commons and led his march of supporters to Wells Fargo Arena at 4:30.

Like some of the other campaigns, Gov. Bullock’s team held a training session for volunteers before the LJ kicked off. Organizers spent time engaging their supporters and volunteers and talking strategy before the Montanan rolled through at 5 p.m. to fire them up.

One of the main talking points for organizers was “relational organizing.” The strategy includes engaging friends, family, neighbors, acquaintances and those who are members of the same organizations. 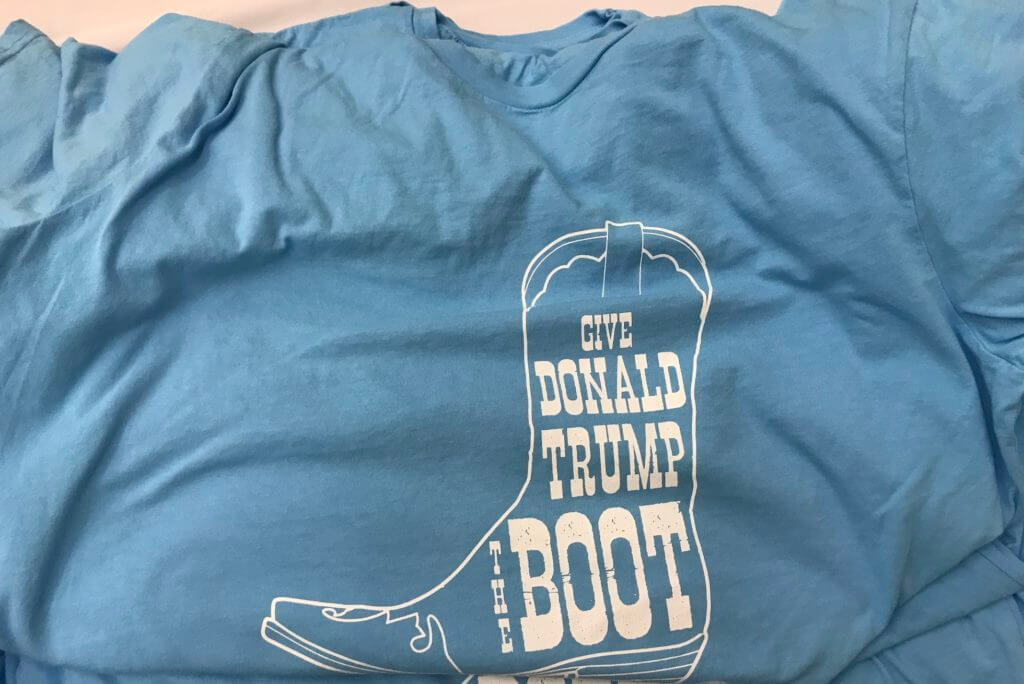 As the last candidate to speak tonight, Bullock is looking to make a splash with his speech, hoping voters leave the event with his message on their minds.

Instead of engaging in sign wars like all other candidates scheduled to speak at LJ, former Housing and Urban Development Secretary Julian Castro toured the affordable housing facilities at Des Moines’ YMCA supportive housing campus. 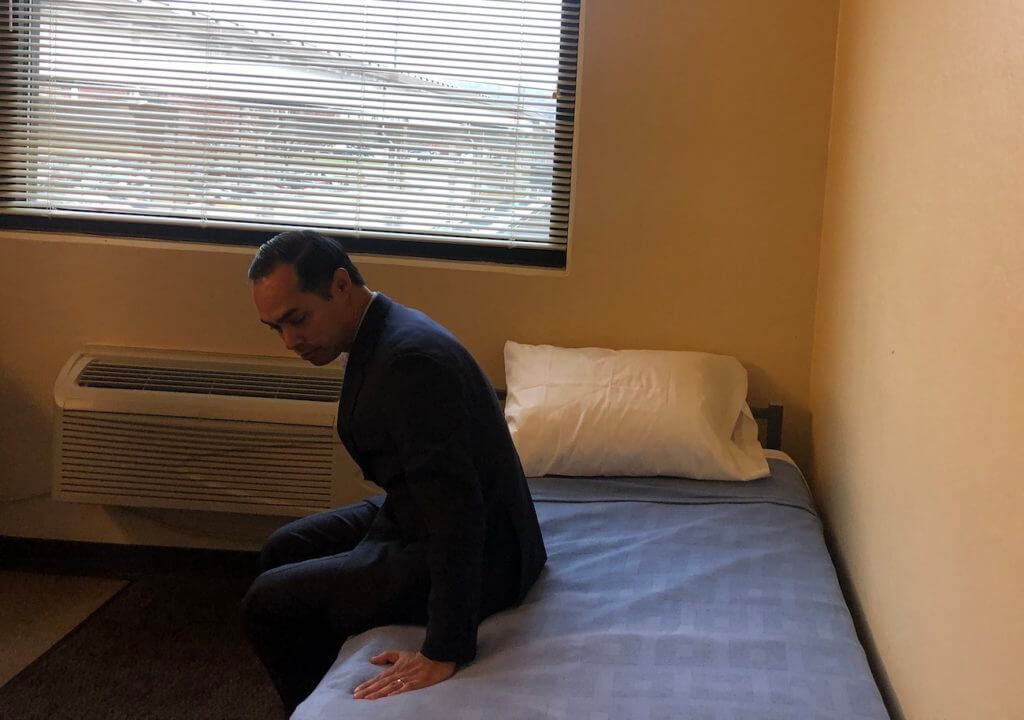 Castro learned about the campus and the city’s affordable housing needs by touring a unit, the kitchen, stock closet and game room before engaging in a panel with YMCA stakeholders and a tenant—who voiced their concerns about local non-profits needing more help from the federal government. The candidate announced this morning that he had raised $1 million in October, enough to keep him in the race after a fundraise-or-die plea, though he still has to make additional requirements to qualify for the Nov. 13 national debate.

“We’re going to work like crazy for the next 12 days before that polling deadline,” Castro said.

The candidate said his voice was unique in the race, as he engages in topics like criminal justice and affordable housing more other campaigns.

The clientele at former Vice President Biden’s campaign rally looked slightly different from those engaged in sign wars and rallies outdoors and in adjacent ballrooms of the Community Choice Credit Union Convention Center.

While Harris, Booker and Warren youth-led supporters lined the hallways of the convention center, a few organizers with Biden signs were also scattered, leading to a consolidated but large event space upstairs where those in either sportscoats or work boots lined the walls.

Members of the Fire Fighters Union, dressed in ‘Fire Fighters for Joe’ shirts were present throughout an audience of supporters eating appetizers and drinking as they listened to a live band.

Russ, the Vice President of a construction company, and his wife Tami, a tennis instructor from Ankeny, said they were supporting Biden because he’s “seasoned and has common sense.”

Tami said she thinks the county has shifted tremendously from the Obama years, and Biden will help the nation get back on track, as he was “a part of those years.”

Cathy Simmons, a retiree from Slater also said Biden’s background drew her to support the candidate.

“I hope he’s the man, he needs to fix things,” Simmons said. “He knows the bad people and he knows the good people from his experience.”

Harris’ all-in investment for Iowa, in which she spent half of the month of October in the state, culminated this afternoon as she made a very loud and energetic entrance into the convention complex. She was led into her pre-event rally room by the Isiserettes, the well-known Des Moines drum line that famously escorted Barack Obama into many Iowa events. 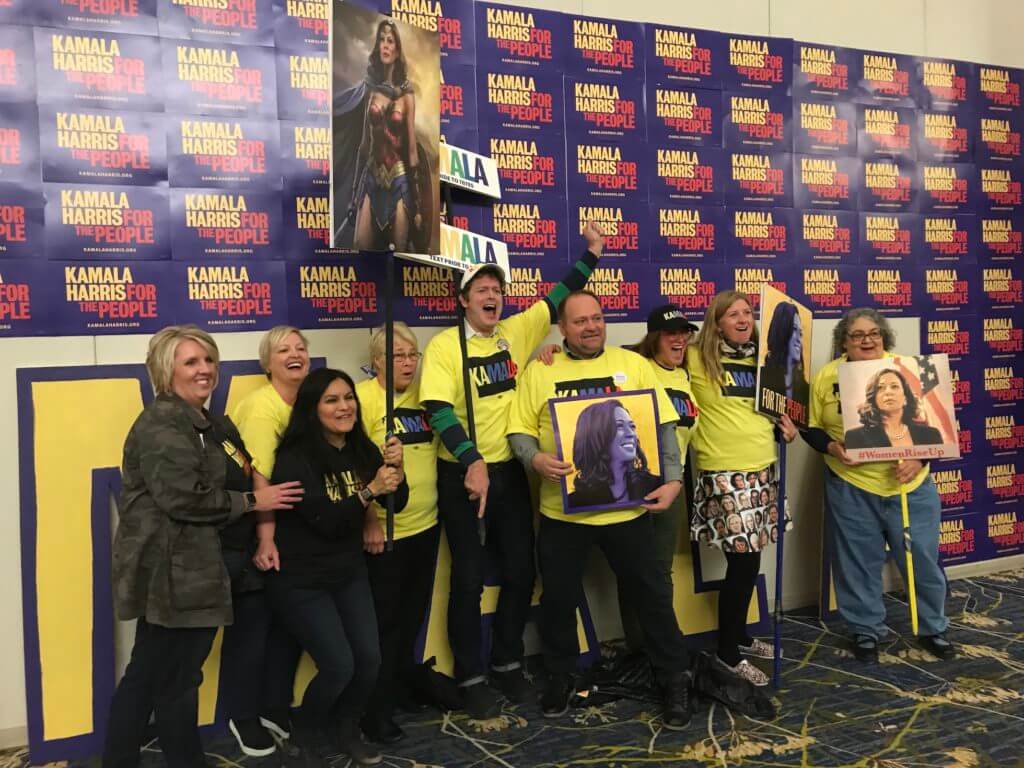 It seemed Harris had practiced some dance moves beforehand, keeping in step with the young musicians rather well. Hundreds of loud and excited staff and supporters cheered her on as she arrived. Earlier in the day, her campaign team opted out of competing in the sign wars out on the streets, instead sending their Iowa field staff out to knock doors throughout the Des Moines metro area. Their team said they had knocked 30,000 doors in the week leading up to the LJ Dinner. 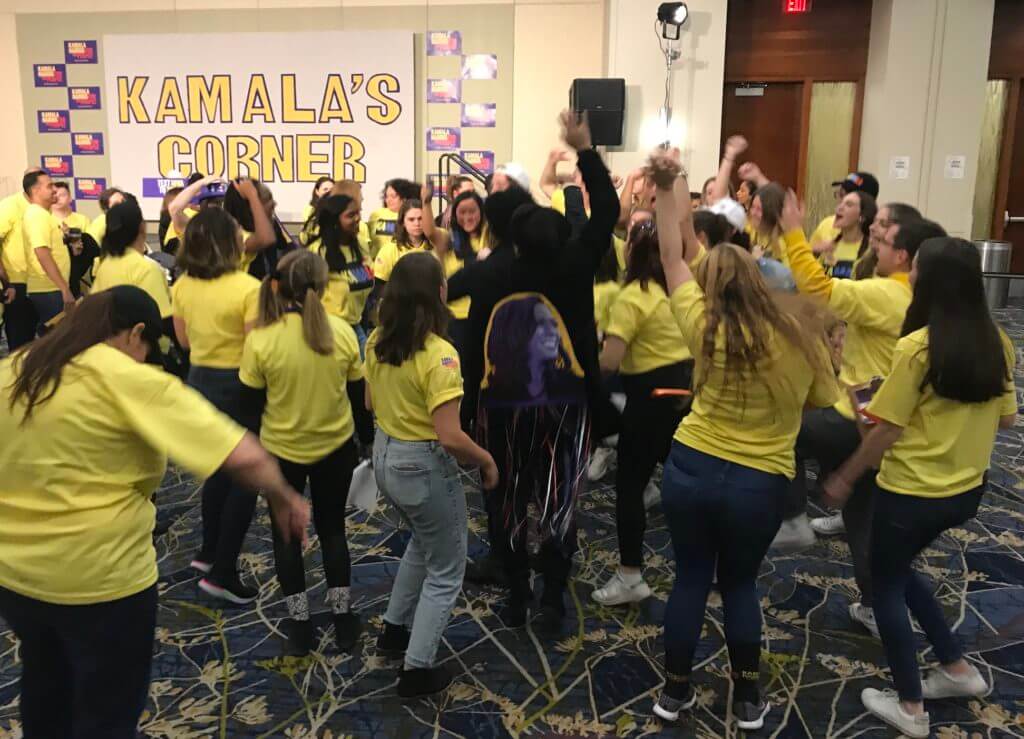 There were reports a few hours before the LJ Dinner that she was closing several New Hampshire offices and had scrapped her planned visit there soon. Harris’ performance tonight will be crucial given how much she’s now banking on a top showing here.

Team Booker was outside, loud and proud early in the day like others, and were joined by the senator for a quick speech outside of HyVee Hall around noon.

Just before the event started, Booker also brought in a marching band for his pre-speech rally, bringing a little energy and liveliness to the room before he spoke to his crowd of supporters. Before he spoke, a couple of Booker staff members performed a Cory Booker themed parody of the Jason Mraz’s song “I’m Yours” — seemingly titled “Knock Doors” — it was a hit.

Booker also had some big guests stop in and take part in his rally, including Rob Sand, Theresa Greenfield, J.D. Scholten, Jennifer Konfrst, and Kenan Judge.

Her campaign covered the town in green “Amy for America” signs before the LJ.

During hear heat-warming speech on the cold, outside stage Klobuchar introduced her husband and her in-laws.

After her speech, Klobuchar and her supporters all dressed in green followed a drum-line in a march up to the LJ.

Vermont Sen. Bernie Sanders’ campaign estimated about 1,500 attended the candidate’s ‘March to End Corporate Greed.’ Signage included art pieces of the Senator’s face, ‘Bernie’ in rainbow type and ‘Bernie not for $ale,’ among others.

Consistent with the candidate’s event theme of ending the greed of America’s corporations, an organic farmer, a McDonalds employee and a union organizer from Burlington, IA were among those who introduced the candidate.

Sanders spent a fair amount of time describing how his administration would be different than current President Donald Trump’s.

“Brothers and Sisters, despite what our self-described “stable genius” President believes, climate change is not a hoax,” he said.

Sander’s also referenced the pending impeachment inquiry against the President.

“In a very short while, that President will and should be impeached,” he said. 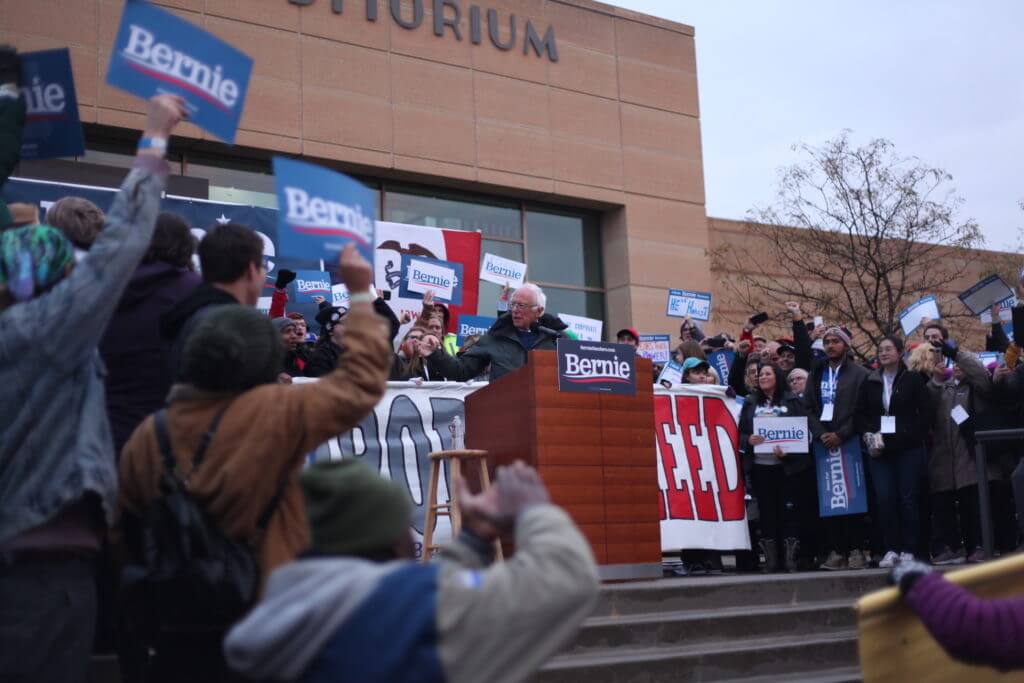 The candidate then marched with his crowd into the event venue, but his supporters are holding a separate event across the street, livestreaming Sanders’ speech into it.

In a surprise turn of events, O’Rourke announced late this afternoon he had ended his presidential campaign.

Supporters hugged and cried at Rotary Riverwalk Park as news of his departure from the race spread. Despite the end of his campaign, O’Rourke still showed up at his pre-LJ event to address supporters.

Chants of “Beto, Beto, Beto” rang out across the damp park as O’Rourke approached the riverside park. At the outset of his final speech as a presidential candidate, the former Texas congressman acknowledged the volunteers who had set up signs and rallied volunteers at 5 a.m to prepare for the LJ.

“This is a campaign that has prided itself on seeing things clearly and on speaking honestly and acting decisively,” said O’Rourke. “We have to clearly see at this point that we do not have the means to pursue this campaign successfully, and that my service will not be as a candidate, nor as a nominee as this party for the presidency.”