It was just over one year ago that Sen. Cory Booker made his first major pre-2020 appearance in Iowa, as the keynote speaker for the Iowa Democratic Party’s fall dinner in 2018. His passionate, nearly hour-long speech on the day of Brett Kavanaugh’s confirmation put him as an early leading contender in Iowa activists’ minds and his trip laid the groundwork to recruit his top-talent caucus organization.

Tomorrow, Booker will speak once again at the party’s fall gathering — now called the Liberty & Justice Celebration — this time the 12th of 14 presidential candidates on the agenda.

Booker has centered his campaign on a specific set of virtues — that of love, patriotism and unity.

But to talk about virtues takes time. Sometimes it won’t be until the 45-minute mark in a Booker event for the Senator to hit his stride, getting into his most compelling personal stories. It’s challenging to discuss the concept of love the way similar Democratic candidates throw out unrelenting, sound-bite statements against Donald Trump during their stump speeches — surely meant to garner a number of retweets.

“To make it as a country, we must mutually pledge to each other our lives, our fortunes, and our sacred honor,” Booker said at an Iowa campaign event in early October. “We now live in a nation where we’re falling into tribalism because we hate each other just because we vote differently.”

Booker embarks on tried-and-true tales during his presidential pitch, like his parents’ struggle to find housing in Newark, New Jersey. He describes how their white neighbors orchestrated a sting operation, which he calls the “conspiracy of love,” to out local realtors engaged in redlining.

Stories like those are sometimes difficult to bring up naturally and have layers that don’t always find secure footing at time-crunched campaign events. But if they catch on, the sagas are effective. At an event this month in Boone, a number of audience members wiped tears from their eyes as Booker described a time his neighbor at a Newark housing project died in his arms after being hit by a bullet.

“I’ll never forget just jumping in the shower, turning the water on so hot, hoping the pain of the outside could numb the pain on the inside,” Booker expressively described, the audience holding onto every word. 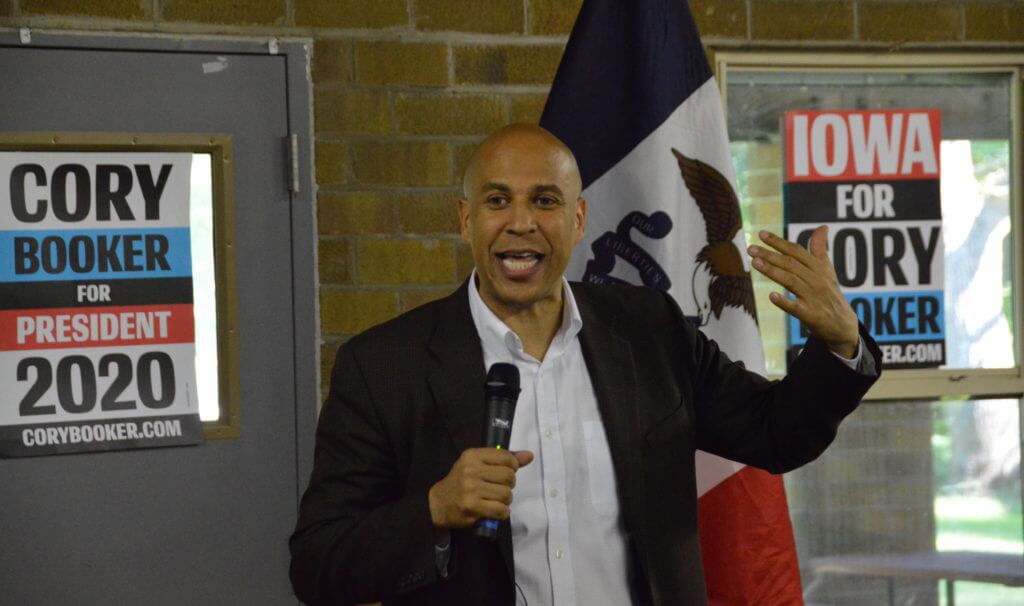 He almost brought out that story in the fourth debate, when the topic of gun violence came up. He started to mention his former neighbor, but the time limits forced him to stick to the bare bones of his policy.

Fredericksburg residents Steven and Francie Crawford came to Booker’s event in Decorah earlier this month to observe the candidate. Both are undecided on who they will caucus for, but said they were impressed with the candidate’s passionate pitch.

“I liked the hope for the future,” Francie said. “I liked how he took it back to patriotism and the historical references about our democracy. The hope for better days.”

Steven commented on the length of Booker’s speech, though noting the value of its content.

“Cory had the floor for about an hour,” he said. “It didn’t seem like it though. He’s a well-spoken man.” 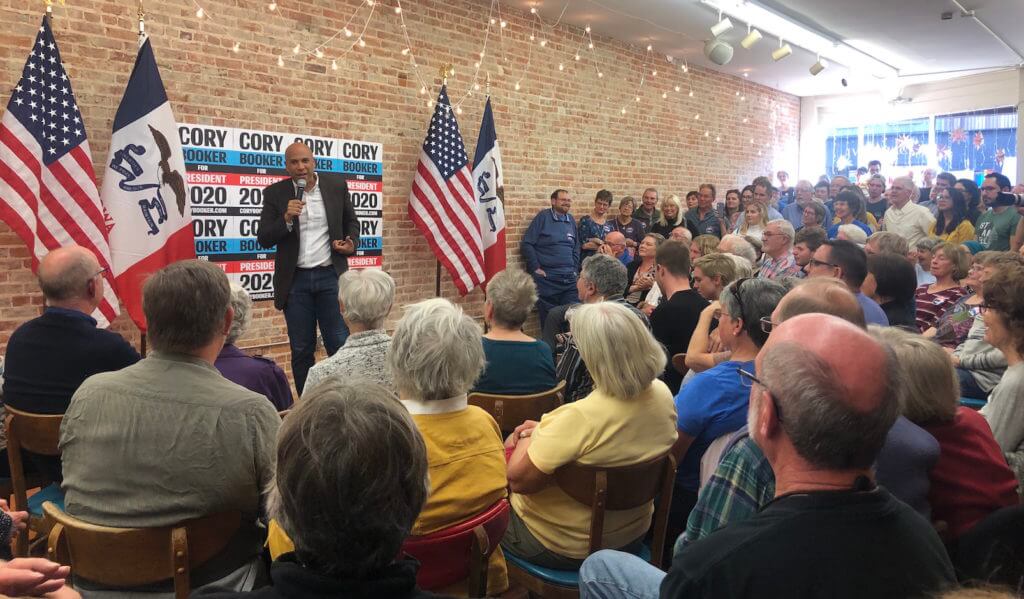 Like the Crawfords, not all who attend Booker’s events are his supporters, though many seem impressed with his speeches.

That sentiment would back up most public polling that shows Booker in the low single-digits in Iowa, but with favorability numbers that rival the front-runners. The latest Des Moines Register Iowa Poll had 42% of likely caucus-goers actively considering Booker, behind only Elizabeth Warren, Joe Biden, Pete Buttigieg, Bernie Sanders and Kamala Harris. In many surveys, it seems that voters really like Booker, they just like one other candidate a little bit better.

Shirley Vermace, also from Decorah, said she is leaning toward caucusing for Mayor Pete Buttigieg. But at Booker’s Decorah event, Vermace said she was was affected by the candidate’s strength.

“He’s a very powerful speaker. I’d hate to lose Booker, Warren, Harris and Sanders in the Senate,” she said. “We’re very lucky to have so many good candidates. [Booker] is so powerful.”

Booker’s trademark focus on “rising above” President Trump’s policies and behavior is often noted by those who attend his campaign events.

Tracy Stolls, an Ames resident who attended a Booker event in Boone, said she appreciates the candidate’s emphasis on unifying the nation beyond a dislike of the current administration.

“I get inspired by his speaking. He gives me hope. I went to the Polk County Steak Fry, and one of the things that struck me was that it was all about how we need to get Trump out of office.” Stolls said. “To me, that’s not what we need for our country. It’s not just about one person, it’s about all of us, and all of us wanting to be at the same table and not fighting. And his message is all about uniting.” 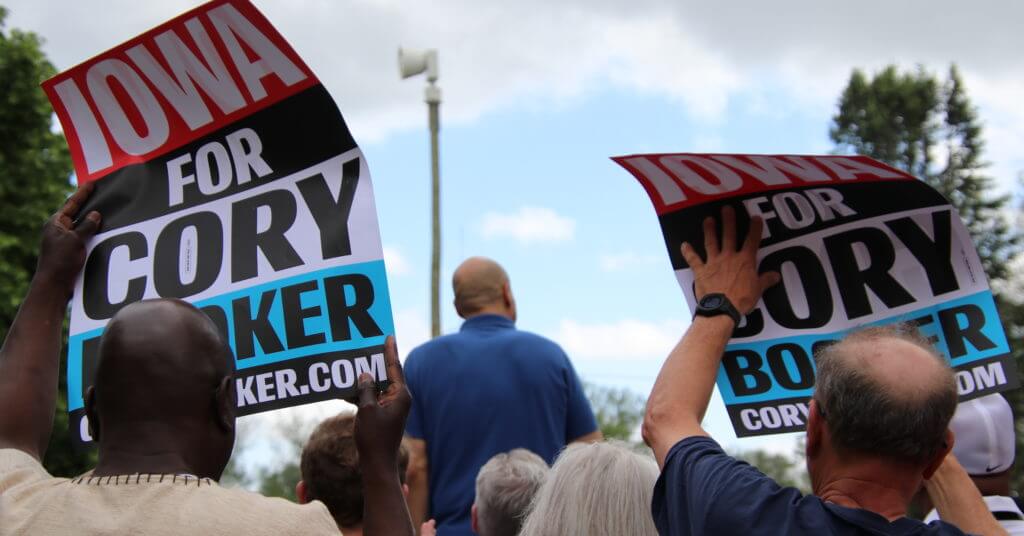 During especially engaging moments of Booker’s cry for unity, audience members will yell, Amen!, or other interjections.

“He has a preaching style that is really profound,” said Stolls.

Booker’s “preaching” of love and unity is often laced with moments of real religious innuendoes. Booker’s campaign event on a Sunday in Decorah sometimes felt more like an evening at an evangelical church.

The Senator was introduced by Iowa State Auditor Rob Sand, who hasn’t formally endorsed a presidential candidate but has often said kind words about Booker publicly. He indicated Booker was a viable option because of his ability to work well with different political views, including more religious voters. 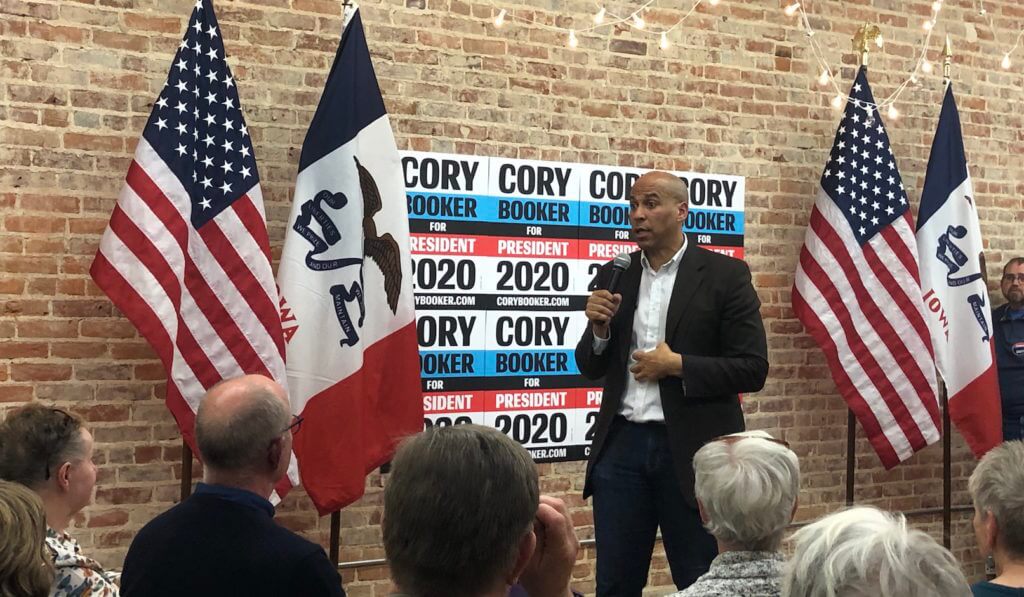 Booker mirrored Sand’s compliments as if in contest for better character.

“[Sand] is obsessed with his job and making this state more honorable, with more integrity, but that makes me believe that God is not finished with him yet, and my prayer for him is that he keeps going on and on in politics and public service,” Booker said.

When asked about reproductive freedoms later in the town hall, Booker again mentioned his relationship with Sand, and how the two share religious literature about the topic.

“One thing Rob and I have a conversation with, as two Christians, is about the issue of abortion,” Booker said. “And I love that literally Rob and I have shared scripture together to talk about this issue.”

Booker tries to end most campaign events with a piece of bible scripture placed outside the room Rev. Martin Luther King stayed the night before he was assassinated: “Behold, here cometh the dreamer, let us slay him and see what becomes of his dream.”

The sentiment is a “civic gospel,” according to the candidate, one strong enough for event-goers to walk away with.

Perhaps the early high-water mark of Booker’s candidacy in Iowa came back on Memorial Day, when the roughly 500 attendees at his Des Moines office opening BBQ walked away inspired and likely convinced that Booker was surging in the lead-off state.

Standing on a small stage in a parking lot, his campaign RV behind him and Des Moines-area extended family members around him, Booker sounded positively Obamaesque for the hour-long speech he treated his supporters and interested caucus-goers to. In the weeks before and after, a slew of well-known legislators and key party activists endorsed Booker.

But as time went on, Booker’s polling never seemed to catch up to the potential he was showing on the ground. Some of that may have to do with his time commitment here. Booker is incredibly compelling in rooms full of Iowans, but since the State Fair in August, he’s only spent seven days in Iowa, with just one four-day trip that wasn’t really dependent on other multi-candidate events.

There is still time, of course, with over three months left until caucus night, and most Iowa polling shows a fluid electorate. A full 63% of likely Democratic caucus-goers say they could still change their mind on who they support.

And Booker has a well-organized ground game that’s ready and able to take full advantage of any momentum. With his strong favorability numbers, just a small falter from the front-runners or a breakout moment for Booker in Iowa or nationally could quickly shift things in his favor in the final months.

Still, the time Booker needs isn’t so much measured in days and months as it in minutes. Because for Iowans to fully appreciate the gospel of Cory Booker, they need the full church service, not just a one-minute soundbite from a debate or a short speech on a crowded night.

All the potential is still there for Booker, he just needs those longer opportunities in front of Iowans.