At least, that’s what he told reporters Wednesday afternoon in Iowa during a quick two-county swing.

“It could end up being a must-win,” Biden said, of the first-in-the-nation caucus state. “It could not make a difference. It depends on how things roll out.”

Biden spoke confidently about his poll numbers nationally, showing him with 34% support among registered Democratic voters, according to a CNN poll released Wednesday.

But, he reminded reporters, polling could change any time.

“I’m fighting to restore the soul and decency of this country, and to rebuild the middle class,” Biden said. “That’s why I entered this race, and it’s up to the voters to decide whether I’m the person to do that. It’s not a personal contest against any other candidate.”

The restoration of a civil society seemed to be what his supporters are after — especially the self-described moderate voters who showed up in droves to hear him speak in Southeast Iowa.

Deb Carl of Muscatine is an Independent voter. She said she tended to be more moderate, pointing out that she’s not a “socialist.” She votes in every presidential election and she’s ready to vote for Biden — if he’s the Democratic nominee.

When asked what issues matter most to her, Carl replied, “I’m just a little worried about his age.”

“Oh, that’s not what you meant,” she said. “The issues are we need to get rid of what we have in the White House right now.”

Kay Paulsrud of Muscatine is another self-described moderate voter. She doesn’t participate in the caucuses because she’s “not into that kind of thing,” but said she’s going to vote for a Democrat in 2020. Paulsrud was not considering any of the Republican candidates this year, but said the Democratic Party “needs to track more to the center to get a lot of people who voted for Trump to come back to the other side.”

Paulsrud was critical of the Democratic field at large with plans offering “free everything,” saying, “that is a little too progressive for a lot of people from this state.”

Lisa Hansen, who lives in Lee County, described herself as an apolitical centrist. She doesn’t usually show up to campaign events. But, she liked Biden.

“I like him as a person,” Hansen said. “I believe he is more concerned with all of us as a country, and not just himself. I like that he has experience and I think on day one he is ready to go.

“I think he would be an excellent president,” Hansen said. “He has a good history.”

Hansen said she was open to discussing and learning more about other candidates, but she was worried the party might sway too far left in 2020.

“I do worry if we get too far left,” Hansen said. “I don’t want to go there. I think it’s going to take somebody like Joe Biden who can talk to people and who has the experience to do this.”

Betty Posz, of Fort Madison, has known Biden for many years and attended his event in West Point. She showed off a picture of her and Biden at the Lee County Fair in 1987. 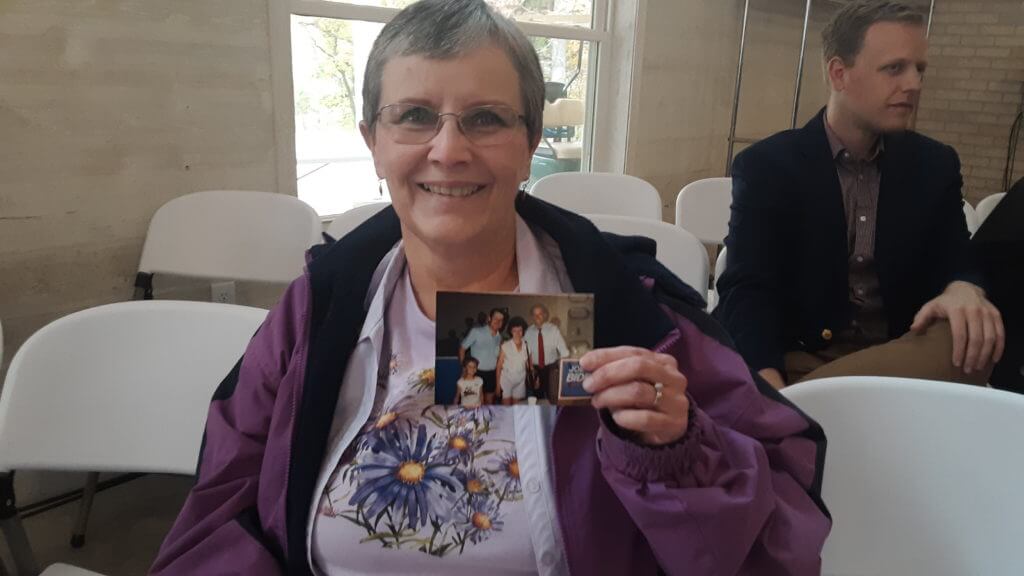 Posz was willing to listen to some of the more progressive candidates. She said she would read Sen. Elizabeth Warren’s plan to pay for Medicare for All when it was released.

“I’d be interested in seeing what she has,” Posz said, of Warren. “But, we were talking about Medicare for All and what does that mean? Does that mean it pays for 80%? Will they pay enough for rural hospitals will keep surviving? There’s a lot of questions there. I like the option of having a choice, but I could be persuaded with the single-payer if that looks like the best way to go.”

Jack Moore, who grew up in Fort Madison, said he supported Biden because they’re from the same era.

“I like his policies and his politics,” Moore said. “His honesty, integrity — all of it. Of all those running, I think he’s the best qualified and decent person. And it’s like Midwestern stuff — you know what I’m saying? Although he’s from the East coast, he’s still down home.”

“She’s a lot like Joe — building on what we have, speaking the truth. She seems like a nice person,” Moore said.

In the end, Moore said he will vote for whoever wins the nomination.

He said he’s more in favor of “building on what we have” rather than a “political revolution” or “big structural change,” as proposed by Sen. Bernie Sanders and Warren.

“It’s good to build on what we have instead of going in with a bat,” Moore said. “I suppose the party may split over that, but that’s the beauty of America. I would think this thing will pull together.”