Senator Joni Ernst, a veteran who serves on the Senate Armed Services Committee, has been publicly outspoken in opposition to President Donald Trump’s recent actions on Syria, Turkey and the Kurds.

On Monday, Ernst tweeted that the Kurds have been a “critical and reliable partner.” This morning, on Thursday, she tweeted about the threat of ISIS reemerging due to Turkey’s invasion.

Ernst said nothing publicly on the matter on Wednesday.

What happened on Wednesday? Vice President Mike Pence was in town to help raise her money for her reelection campaign.

Pence came to Iowa for a major speech about the USMCA trade deal, then stuck around that evening for a fundraiser for Ernst. As Bloomberg’s Jennifer Jacobs reported, the event was closed to the press and attendees were even barred from bringing in their phones, presumably to prevent any recordings of the night from getting out. 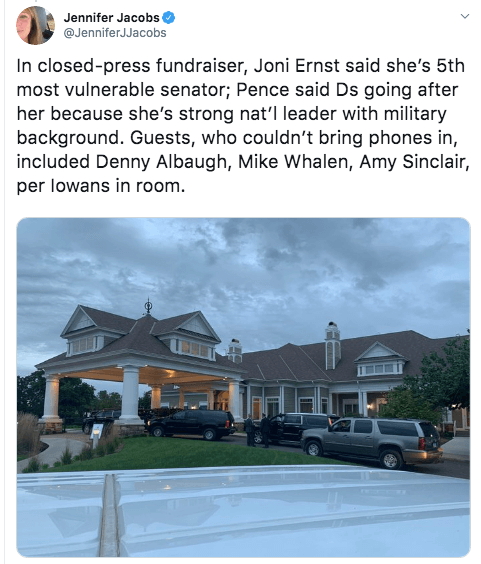 According to Jacobs’ sources, Ernst said she was the fifth-most vulnerable incumbent senator in the country in 2020.

Ernst’s opposition to the United States removing troops from Turkey is a long-held position for the senator on an issue she cares deeply about. Between December 2018 and February 2019, Ernst was quoted multiple times saying the U.S. troops should continue to support Turkey.

In February, Ernst said: “I’ve been clear in my opposition to any withdrawal of U.S. forces from Syria — an issue the president and I disagree on. I believe our mission there is to defeat ISIS, and that hasn’t been accomplished yet.”

A month earlier, Ernst said the president had been advised by others that ISIS has been defeated in Syria, “but what intelligence shows us is they have not.”

We have defeated ISIS in Syria, my only reason for being there during the Trump Presidency.

“Not long after (the President) decided to withdraw troops from Syria, we saw an immense attack that left a U.S. service member dead,” Ernst said.

About the same time Ernst and Pence took the stage in Waukee at the USMCA event on Wednesday, Trump held a news conference at the White House. He said the United States “did a big favor to a lot of countries” by capturing members of ISIS. When a reporter asked if “ISIS fighters will escape and pose a threat elsewhere,” Trump answered: “Well, they’re going to be escaping to Europe. That’s where they want to go, they want to go back to their homes.”

The bizarre statement nearly overshadowed an exchange between Pence and a reporter in Iowa.

Ernst stood quietly nearby as she watched Pence continually dodge a question over Ukraine.

NBC News’ Vaughn Hillyard asked the Vice President multiple times whether he was aware Trump had interest in investigating the Bidens, and if that was part of the reason aid to Ukraine was held up.

“Were you ever aware?” Hillyard asked.

“I never discussed the issue of the Bidens with President Zelensky,” Pence replied.

“What I can tell you is that all of our discussions internally, when the President and our team in our context in my office with Ukraine were entirely focused on the broader issues of the lack of European support and corruption,” Pence said.

WATCH: VP Mike Pence repeatedly dodges questions from @NBCNews' @VaughnHillyard about whether he had knowledge of Trump's Ukraine plot pic.twitter.com/xLm9D8f3Aq

It is entirely possible, if not likely, that Ernst discussed the Syria matter with Pence while he was in town. But it was noteworthy that Ernst, who has been willing to publicly push back in name on Trump in how he handles the Turkish/Syrian border, wouldn’t publicly do so when in Iowa with Pence.