Kamala Harris returned to Iowa this week on a mission: rejuvenate a stalled campaign.

The lead-off caucus state is a natural place to stage a comeback, though her new rally playlist specifically directs you to “don’t call it a comeback” via a LL Cool J song.

As Harris herself explicitly explained to the crowds in her revised stump speech, Iowa is known for taking chances on candidates and lifting up the underdogs.

“You have the ability to believe in what can be, unburdened by what has been. And I know it to be true, and Iowa you’ve done it every time,” Harris said at a town hall in Ankeny on Monday. “You have always been about breaking barriers and saying ‘this is possible’ and leading the way. When you nominated Barack Obama. You guys did that. You did that. When Hillary Clinton was the first female, woman nominee you did that.”

Harris’ three-day trip around Central Iowa was the first of her once-a-week October blitz in the state, designed to rebuild momentum after her polling numbers have cooled significantly after the summer. She plans on spending half the month in Iowa, with a renewed focus on smaller, more intimate gatherings aimed at strengthening up her caucus organization.

The timing here is important: the last high-profile, multi-candidate event of the Iowa Caucus is the Iowa Democratic Party’s Liberty and Justice Dinner (formerly known as the Jefferson-Jackson Dinner) on November 1. It’s the final major gathering to have an Iowa-specific breakout moment, and the lead-up to it can be as important as the night itself.

Filling the room with excited supporters – or having activists there open to being won over – takes a lot of groundwork to accomplish. That’s part of what Harris’ narrowed focus on smaller organizing events hopes to accomplish.

On Tuesday morning, she spoke to a Des Moines living room full of two dozen Women for Kamala precinct captains from around the metro area. Gathered on couches and chairs in front of her were both first-time voters and caucus veterans, recruited to fill up “Kamala’s corner” in their precinct with supporters on caucus night.

There, Harris loaded up her volunteers with some extra talking points on her candidacy.

In these smaller settings, Harris gets a little looser than on the stump, delving a bit more into personal stories from her career than typical, even if she still repeats many tried-and-true talking points.

“Nobody should be made to fight alone,” she said of her prosecutorial career. “In those cases, for a large part of my career, I specialized in crimes against women and children, with an emphasis on child sexual assault. Some of the worst cases you can imagine. The point always being that those survivors of that variety of crimes that happen against women and children, those survivors are often told … nobody cares about you, or they won’t believe you, or you will be judged. The point being, in our system of justice, we say, no. You are not alone. And you should not be made to defend yourself against this. We the people stand with you.”

Something else was smaller for Harris this week: her town hall crowd sizes.

Way back in February, Harris drew over 750 people to her Ankeny event at DMACC’s campus, shortly after her much-hyped entrance into the race. On Monday night, her outdoor event a few miles up the road at an Ankeny park brought out around 300. An Ankeny Democrats summer picnic in the same spot, headlined by Amy Klobuchar and John Delaney, got about the same number of people. 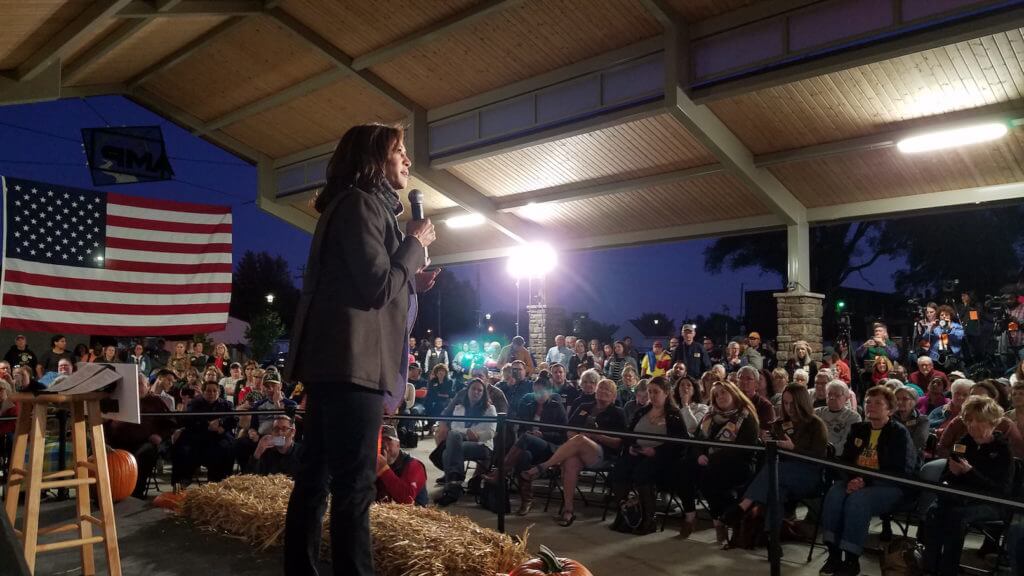 But in an odd way, this may be the one caucus cycle where almost every candidate – even leading ones – see their turnouts shrink as they head closer to caucus night. With so many credible contenders in the race, caucus-goers are starting to ration their time to only their top three choices as they make a difficult decision between many well-liked Democrats.

Filled ballrooms and gymnasiums of 1,000 Iowans don’t mean as much if most are passively window-shopping the whole field. The priority right now for Democrats like Harris is to win over and lock in as much of the Iowa electorate that’s still actively considering you as possible.

And with no candidate polling above 22% in the most recent Des Moines Register poll, just securing a sixth of the electorate may be enough for a top three finish.

To that end, Harris stayed late into the evening on Monday, working over undecided caucus-goers one by one in a small clutch setting after the event.

Most campaigns gather groups of 20 to 30 prominent local Democrats to meet a candidate personally before or after a large event. Instead of party leaders, however, Harris’ field organizers selected specific rank-and-file Democrats who were certain to caucus, but were wavering between Harris and one or two other candidates.

The senator moved from small table to table at a brewery behind the Ankeny park, personally answering every Iowan’s questions and concerns for well over an hour. Things got a bit loopy late at night, with Starting Line overhearing Harris singing some kind of children’s lullaby song to an older attendee, the context for which was unclear.

Many people signed caucus commitment cards with staffers afterward, and a few may end up getting asked to be caucus night volunteers.

That’s where Harris’ strategy doesn’t so much go small as it goes targeted.

While the videos of her helping make dinner with an Iowa family made the news, it was the clutch events, precinct captain trainings and activist gatherings Harris attended that moved her caucus organization along the most.

With such a huge field, the battle for experienced precinct captains and volunteers is about to get intense. In all but the most super-engaged precincts, there simply is not enough caucus veterans to go around. Democrats who know how to manage a caucus group will be at a premium.

The threshold to meet viability is 15% in most precincts. No candidate, not even the top-polling ones, will reach that in every precinct around the state. A solid, local volunteer can be the difference between getting two delegates in a precinct or getting zero.

Harris’ focus on this recent trip was women activists, one group she ought to do well in picking up some more key leaders.

On Monday, Harris met with a Moms Demand Action group in Ames, where she gave some remarks and answered questions related to people’s concerns about gun violence in their communities before their meeting.

The Iowa chapter of Moms Demand Action formed in June 2013, and meet monthly to discuss how to volunteer, how to advocate for smart gun control policies and how to spread information about gun safety proposals.

Harris talked about the times she’s met children and parents who are terrified of gun violence, about those who tell her they don’t want to die, and she said that’s a clear call to action.

Harris also praised the activists for stepping up and being the voice of the issue, and she thanked them for their work and dedication. 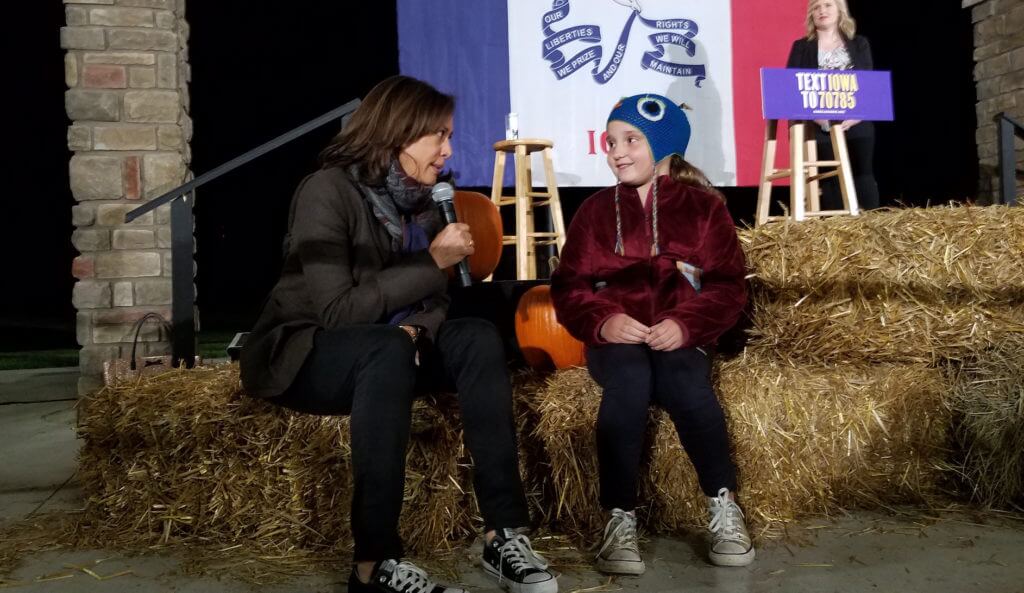 At Harris’s town hall in Ankeny on Monday, Ann Dvorsky was one of many excited people in the crowd.

“I think she is smart, I think she’s one of the toughest people,” Dvorsky said. It was her fourth time seeing the candidate in person. “She’s the one to beat Donald Trump.”

That’s the scenario the candidate was hoping Iowans to envision, making her electability pitch very precise.

“Are we ready for a woman of color to president of the United States?” Harris, in Ankeny, said some have been asking of her candidacy. “Well, it’s not a new conversation for me. In fact, it’s a conversation that has come up every single time, in every election I have — and here’s the operative word — won.”

1 Comment on "One Caucus-Goer At A Time, Harris Climbs Back In Iowa"