Des Moines is a great place to live; it’s growing fast, it’s diverse and rapidly getting the attention of young Latinx candidates running for office. 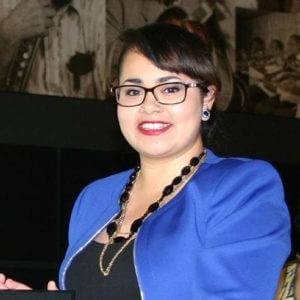 Marlu Abarca was born and raised in Los Angeles. She moved to Iowa in 2010 to attend Grinnell College, where she studied psychology with a concentration in language acquisition.

She was the first in her family to attend and graduate from college.

After graduating in 2014, she joined AmeriCorps VISTA where she worked for two years improving higher-educational resources and services for Latinos in Central Iowa.

At 27, she already is seeking to create a new vision and a better place to live for Des Moines residents.

Abarca is vice chair of the Iowa Commission of Latino Affairs and a former ACLU board member. She also works as a bilingual services assistant at the Des Moines Public Library. Through her position there, she wants to ensure the library is a welcoming environment that engages the community, celebrates culture and promotes literacy.

Why was it important to you to run for Des Moines City Council?

“Because I want to educate minorities about civic engagement and underrepresented communities about how they can be more proactive with the decision making in the Des Moines City Council. I have always been concerned about transparency, social awareness, and equity.”

While campaigning, Abarca found many residents, particularly in minority communities, never had been visited by a city council member or candidate.

“Many Des Moines residents have historically been left out of the process of participation. It is not because they don’t want to vote, but because candidates did not see enough money or votes from this community and, therefore, they did not think our minorities are important enough to reach out to.”

What’s most important for our city right now?

“To live in a city where we don’t ignore the needs of its residents. Where there is affordable housing stock and where we can make Des Moines accessible to different types of transportation.”

What would you do differently if elected?

“I will donate 50% of my salary to non-profits that support kids or minorities.”

As an Afro-Latina descendant, she feels privileged to now be in a position where she can represent diversity and racial equality in elected office.

“I want to bring to the table not only another way of thinking, but also bring community representation for minorities, LGBTQ, young professionals, middle class and much more — something we don’t have right now — people like me, that works in Des Moines and want a better lifestyle. Twenty percent of the residents in Des Moines are minorities.”

Abarca said she would focus on improving Des Moines’ schools and education system.

“Schools are suffering, part of my passion is to help students. Twenty-five percent of students in Des Moines speak Spanish as their first language. They are the next generation of consumers and residents of tomorrow.”

Des Moines Public Schools is the most diverse district in Iowa. According to 2014 data, 60% of its students are non-white and 21% are English language learners. 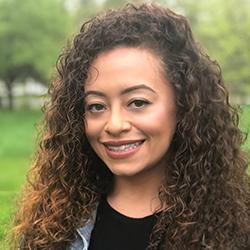 Chelsea Chism-Vargas is a first-generation Iowan raised on the southeast side of Des Moines. A Peruvian-American, she works for Planned Parenthood as the advocacy manager of Iowa.

“I’ve committed my career to working directly with vulnerable communities to empower them, organize around the issues closest to them, and provide them with the skills to be able to advocate for themselves to advance policies and control their own narratives,” she said.

“I’m a very community focused individual, as I see communities as the main way to build power to promote healthy and inclusive lives. I love the southeast side of Des Moines as it has raised me to be the woman I am today.”

Why are you running for a seat on the city council?

“I am running for the Ward 4 city council seat because my community has transformed and we deserve transformational leadership that reflects who we are now. My ward deserves someone who knows our neighborhoods and will fight for all of us. Right now, many folks in my ward feel you have to be well-connected to be adequately represented. As councilwoman, I will be a leader for all residents in my ward, not just the well-connected few. I am running to empower my community so we are prioritized in city government.”

What do you believe is most important right now for Des Moines?

“To better support an efficient pathway to affordable housing, all avenues must be explored. Rehabbing and better utilizing existing buildings for the benefit of our residents is critical and requires a creative approach. When building new properties, making certain that developers are reserving units to meet affordable housing needs would reflect their commitment to the health and well-being of our residents.

“New businesses should be a reflection of the needs and desires of the communities that will be accessing and supporting them. New developments would surely be welcomed as needed, if existing spaces would not be adequate. To truly put our residents first, any project, whether new or existing, should be of service and match the community it will exist in, in order to contribute to and advance the lives of our residents.”

If you could change one thing in our zoning code, what would it be?

“I would actually take a look at the current planning and zoning code changes and not support the proposed 1,100 square-foot requirements for new homes with a basement. I would not support this, as I see it as a direct threat to affordable housing.

“Our current housing market does not have a demand for larger homes, so requiring a minimum square footage is counter productive. This is also driving up the costs of homes, making dreams of home ownership unattainable for families and individuals like me. This zoning code is only creating more barriers for economic growth of our residents. We need a diverse mix of housing supported in order to assist our residents and serve their needs, rather than the city’s own desires.”

If elected, what three steps would you take to put our city on a firmer financial footing?

2. Prioritizing economic development in areas that need it most will be an investment that the local economy and city will benefit from financially and give all of us a brighter future.

3. Applying an intersectional mindset to the city’s budget would ensure every dollar spent goes towards a multi-purpose use, allowing our budget to be stretched across needs and allocating that every cent is spent wisely and strategically.”

Chism-Vargas is running against Joe Gatto and ToyA Johnson.

To learn more about her campaign, visit www.facebook.com/Chelsea4Council/