If Julián Castro is to do well in the Iowa Caucus, one thing he’ll likely need is strong turnout from the state’s growing Latinx community. But when he visited Perry, Iowa late last month– a town where nearly 40 percent of its residents are of Hispanic or Latino origin– his campaign event had almost all white faces in the crowd.

That’s not just a problem for Castro, however — Democrats in Iowa have struggled for years with boosting turnout from Latinx voters, especially in areas of Iowa grappling with the effects of anti-immigration attitudes.

Castro recommended encouraging civic engagement at churches, soccer fields and restaurants, while also looking to his reformed immigration plan and the possibility of future virtual caucuses to strengthen the voter bloc.

“I think that little by little, people are able to trust, and are able to come out more and engage. But you need to meet them where they are. And they often are in those churches, soccer games, restaurants, the cultural, civic and religious institutions that people get more comfortable with,” Castro said.

U.S. Census Data found that about 37 percent of Perry is of Hispanic or Latino origin, while that number is only about six percent in the state. Castro was prompted to talk about Latinx engagement and immigration after Warren Varley, a former candidate for the Iowa House, asked how to get the community more involved.

“When registered voters of the Latinx community turn out, Democrats do well, and as you can see, we don’t have a large number of that voter base represented here,” Varley said at last month’s event. “What can we do, as a Gringo, to get the Latinx community to vote, and become more involved?”

Varley said he had a hard time tapping into the Latinx voter base when he was a candidate in the area in 2018, which was around the time of the death of Mollie Tibbetts, a 20-year-old student from the University of Iowa who went missing after going for a jog in Brooklyn, Iowa.

Over 30 days later, her body was found in a cornfield south of Guernsey. A trial is set in November for Cristhian Bahena Rivera, a 25-year-old undocumented immigrant who lived and worked in the area. The Latinx community in Iowa feared they’d be blamed as a whole in the aftermath.

“I remember reading about that, and it’s very unfortunate what happened with her,” Castro said. “But that’s no reason to indict an entire community.”

According to Varley, Perry has been wary to participate in public life since. Tibbetts’ death prompted the postponement of last year’s annual “Viva Perry!” Latino Festival.

“Right now, unfortunately, [the Latinx population] don’t feel comfortable,” Castro said, “participating in processes that have to do with the government.”

Start with the Rural Workforce

But Castro said aspects of his immigration plan might strengthen the area’s Latinx community. Also in September, the candidate was asked about immigration in the context of the rural workforce at an event in Jefferson. 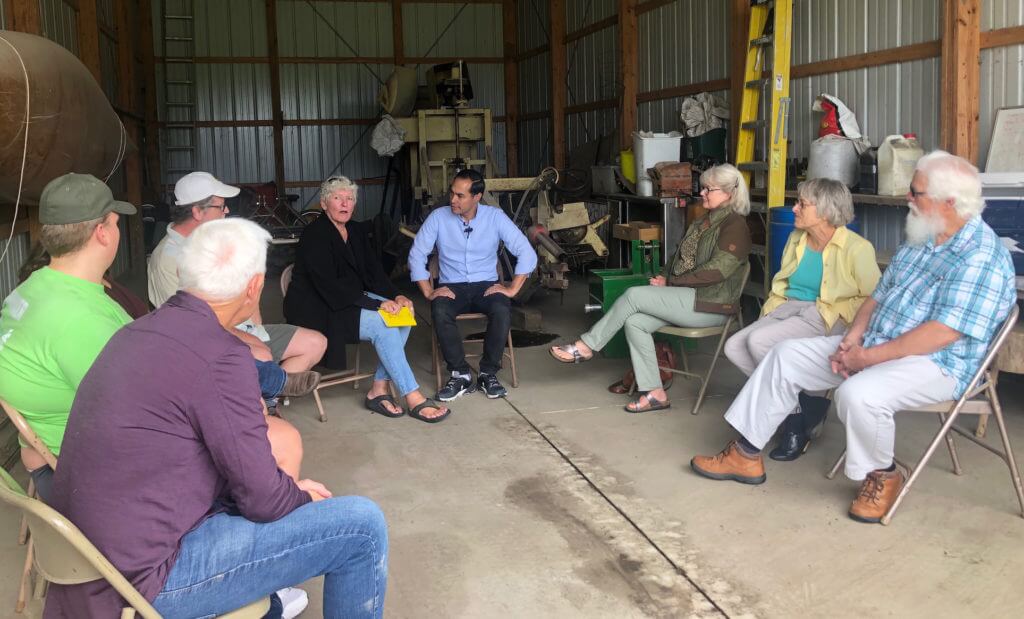 Chris Henning, a Jefferson, Iowa resident, asked Castro how to mitigate poor public opinion about immigration in the wake of the current administration’s policies.

“How do we turn this crazy situation that we’ve got going on now around to be humane and welcoming?” Henning asked. “I mean we welcome in Iowa, from the Vietnamese in the past, and the Bosnians and the Somalis, how do we get back to something we’re proud of instead of this craziness?”

In the candidate’s plan, undocumented immigrants would be able to work as they are put on a pathway to citizenship.

“It’s not just the undocumented system that we need to address, it’s also this broken legal immigration system and the ability of people to work here,” Castro said. “[The Latinx community is] really scared of getting caught in the crossroads of the government in general. And so people are not participating in the life of the community, whether it’s working or doing anything else.”

Future Implementation of a Virtual Caucus May Help

This fear is one of the reasons Castro spoke up when the virtual caucus was not approved by the Democratic National Committee in August, he said.

“I strongly urge the DNC to embrace the values of our Party by allowing absentee voting — either through a secure virtual caucus, mail-in ballot, or early voting absentee process — in order to ensure that all Iowans have an opportunity to participate in their caucus,” Castro said in a statement in August.

The DNC nixed plans by Iowa and Nevada to hold virtual caucuses, citing cybersecurity concerns, but the candidate hopes the concept might be refined and instated later.

“I hope eventually that we are able to get to some sort of virtual caucus in the years ahead — some way that people can feel more comfortable participating, especially in a climate like this,” Castro said.

This includes adopting automatic voter registration and using more third party or civic groups to push the community to caucus and vote.

“We can’t rely only on campaigns,” Joaquin said. “They’re short on time and they’re short on money. So they’re going after people who are consistent voters.”

“You got to go out there and talk to people who aren’t voting at every time there’s an election.”