Abby Bankes, an 18-year-old Drake University freshman from Oak Park, Illinois, has always had politics as a part of her life. But the first political event of her life as a college student? The historical, record-breaking Polk County Democrats Steak Fry.

It was referred to by party organizers as the “Coachella of the Caucus,” and Bankes said she didn’t understand what that billing meant, until she got there.

“It was unlike anything I’ve ever experienced before,” Bankes said. “It was overwhelming and exhausting, but also one of the best experiences I’ve ever had.”

All of this, in just over a month since the semester at Drake University kicked off.

How Drake is situated in the caucus cycle here in Iowa helped Bankes choose the school over one in Chicago. And she isn’t alone in that decision.

Students from across the country come to Iowa for college, especially Drake, with the hopes of chasing their dreams of working in politics. Or, at the very least, to see the spectacle first-hand. 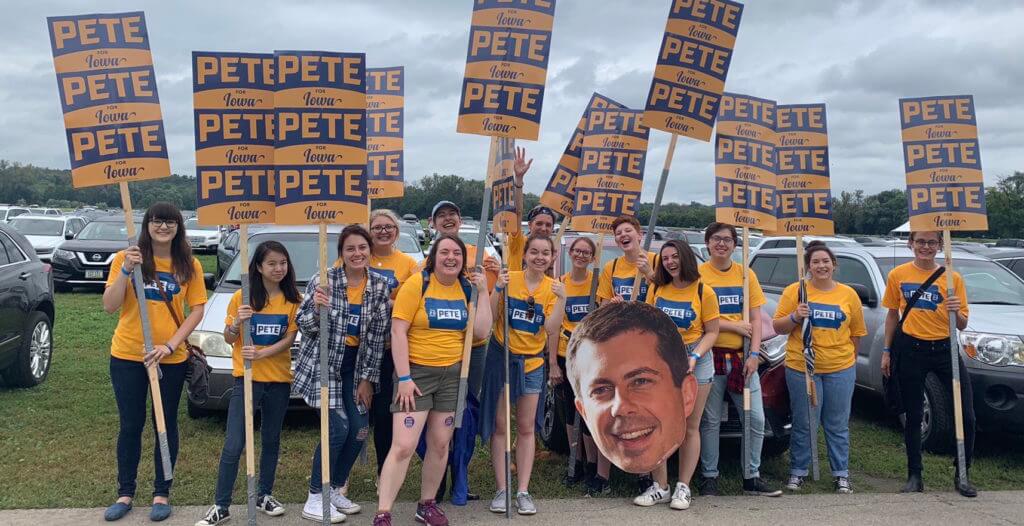 This was the case during the 2016 presidential cycle, too, when many candidates visited and held town halls. Democratic debates from both CNN and CBS were hosted by the university, as well as President Trump’s infamous veterans fundraiser that, at first, didn’t actually raise any money.

So after being enticed by the ’16 cycle, students who enrolled in Drake hoping to see a presidential candidate or two, and maybe get involved, got what they were after.

Drake students carpooled, received tickets from campaigns and rallied and marched at the event that grabbed national headlines. Nearly every major Democratic presidential candidate was in attendance, addressing supporters, and flipping some steaks on a grill.

Matt Deike, a Drake first-year who identifies as a moderate Republican, said he considered his attendance at the Steak Fry a success, after snagging a selfie with Andrew Yang.

Rachel James, 19, who is studying political science and journalism, felt lucky to have attended.

“That has to be one of the greatest experiences of college so far,” James said. “It truly was a once in a lifetime. The amount of candidates, the political culture and climate we’re in right now, I don’t know if we’re ever going to get to experience that again in our lifetime.”

Madeleine Leigh, a Drake sophomore also studying political science and journalism, says the energy, especially around the crowd for Mayor Pete Buttigieg, was encouraging for Democrats’ hopes of energizing the party.

“Everyone was genuinely happy to see what was going on.”

Emilyn Crabbe, 20, said the event was a great chance to see the politicians do a bit of retail politicking, instead of them simply giving a stump speech.

“All these really important political figures, and they’re just there, wearing jeans and flipping steaks,” Crabbe said. “It’s just seeing them in a really casual element, it was really Iowa.”

Drake does a lot of out-of-state recruiting, so many students are being flung (voluntarily and enthusiastically, Starting Line should note) into the circus of Iowa politics head-first.

It’s why they came to Iowa in the first place.

Crabbe, originally from St. Louis, Missouri, says her career aspirations in politics really began after watching the West Wing in high school. So, when looking for a school to attend for pursuing that interest, she happened across social media posts and the televised debates at Drake.

“I knew that it would be even crazier in 2020, and it’s living up to its promise so far, definitely,” Crabbe said. “It’s been feeling a lot like I made the right choice in coming here.” 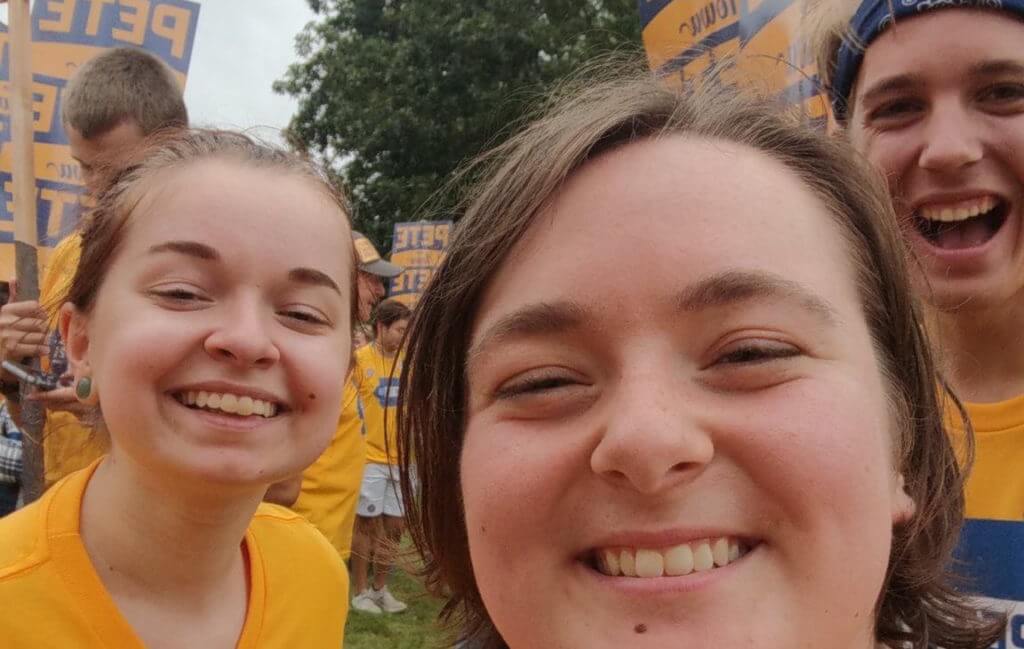 “I’m going to have a chance to see everybody — I have, almost, after the Steak Fry,” Leigh said. “Drake is an excellent place to do that, and it’s why I came here.”

James came to Des Moines from Anna, Texas, and says she was the political black sheep of the family.

“I would just watch the debates in my room by myself on Twitter, and the interest sparked from there,” James said. Again, the debates on TV and social media were the driving factor behind her decision to become a Bulldog.

As for students now enrolled, James added, the political atmosphere is unavoidable, regardless of where your hometown is.

“Living in Des Moines right now, it’s totally different because of the caucuses, it doesn’t matter where you’re from,” James said.

Leigh noted, “You can definitely see a lot of the people who came here did so to have the chance to be involved. It’s kind of like something’s in the air — it’s politics.”

Yet, despite the Democratic Party getting all of the campaign attention right now, it’s been an adjustment for students from more traditionally blue communities.

Attending a school of around 4,000, Bankes says, moving to Iowa has required some adjustments. “I can name maybe four people in my high school who identified as Republicans.”

Now, she’s made more of a conscious effort to consider others may have varying view points.

“I try to change the way I think and speak in class to communicate with my peers,” Bankes said.

Leigh, who is from the purple county of Kendall County in Illinois, added that it was refreshing to have political conversations in Iowa.

“Coming here, was almost like a breath of fresh air, not necessarily because people had different opinions, but because their opinions were more informed,” Leigh said. “And you can have real critical discussions about policy and about candidates’ backgrounds in a way that I wasn’t used to.” 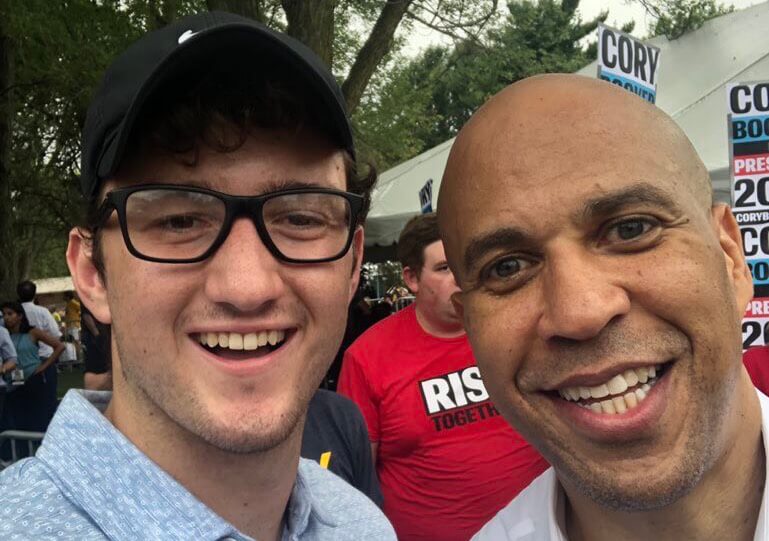 Students Organizing For The Caucus And Beyond

Students have taken it upon themselves to get organizing, especially in support of their candidate for choice.

There’s Bulldogs for Booker, Drake for Warren, Bulldogs for Pete and more — as James puts it: “there is someone for everyone.”

Vice President of Drake Democrats Jackie Sayers said they’re excited about the enthusiasm and momentum the caucuses are bringing to Drake students.

“I think it’s great that there are so many candidates running right now because you have a lot of students getting involved in all these different campaigns,” Sayers said. “It’s really great for our club and I think we’ll carry the momentum forward after the caucus.”

And Sayers may be right about the momentum.

Nearly every student Starting Line spoke with said they hoped to go on to volunteer or intern on down-ballot races once the caucuses wrap up, and are eager to get involved, regardless if the race is for president, U.S. senate, or an Iowa House race.