It’s been a consequential month for youth dedicated to tackling climate change.

Before Swedish 16-year-old activist Greta Thunberg on Monday scolded the U.N. Climate Action Summit audience asking, “How dare you?“, students across Iowa organized and promoted a number of events with presidential candidates over the weekend. Events included a small meeting with Kamala Harris, a town hall with Joe Biden, a private meeting with Elizabeth Warren and a Linn Mar High School student-led climate forum with Julián Castro.

“While students across the country and around the world are striking for climate with Greta Thunberg, in Iowa students are talking directly to the presidential candidates,” said state Sen. Rob Hogg, of Cedar Rapids. “I hope every candidate gets that opportunity.”

But Isha Kalia, Kit Iyer and Allie Schumacher, all seniors at Linn Marr High School in Marion, said they decided to instead focus their efforts on promoting the Castro climate forum event they put together, and encourage youth attendance at the weekend’s other candidate events. 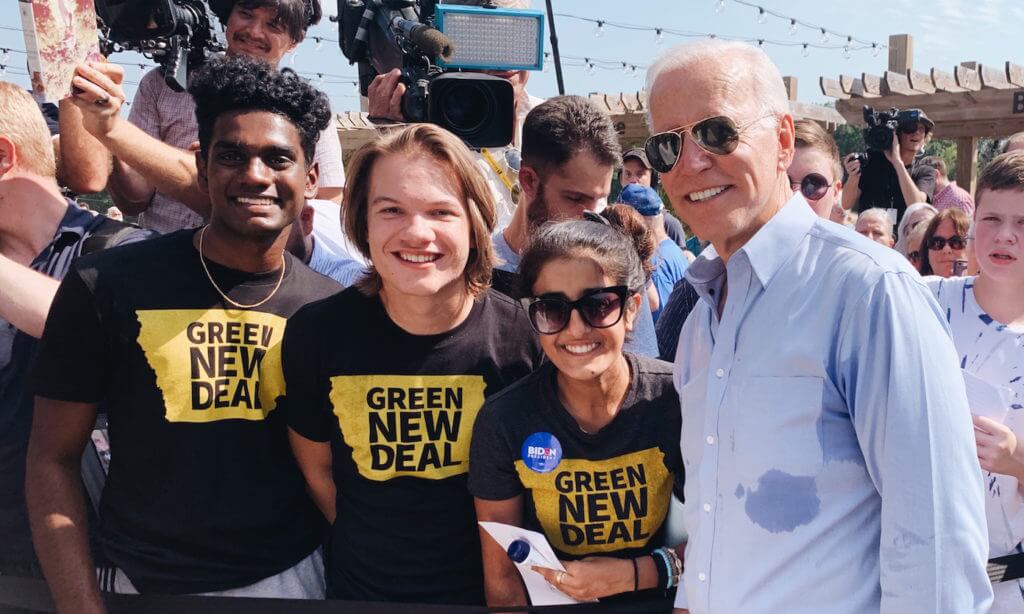 “These strikes, I don’t know how much political policy that would actually change,” Kalia said. “Getting to talk to actual political leaders who might be in high positions one day can help students really understand this is who you need to vote for, and these are policy changes you need to ask for.”

But Kalia said Thunberg inspires a lot of young people, like herself, in their climate activism endeavors.

“I think she is an inspiration to a lot of people, just seeing her speeches — she’s a great public speaker and even my counselor came up to me today and was talking to me about her speech,” Kalia said. “She’s super empowering and I think she’s doing a great job.” 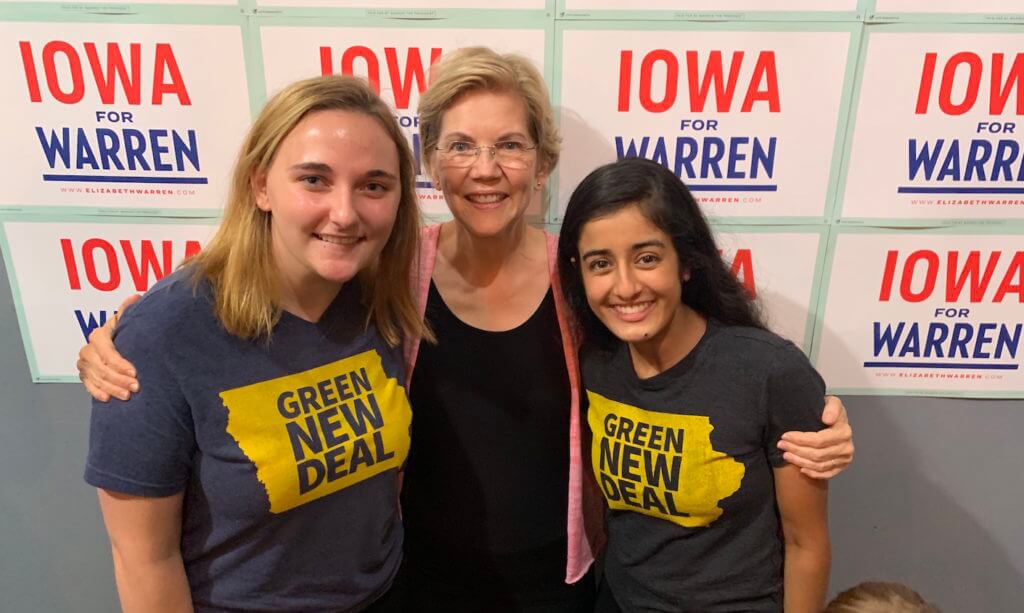 Behind the students is the coordinated effort of a few adult leaders involved in the Sunrise Movement, a growing youth-led environmental advocacy effort with local hubs all over the country. You’ve seen them before; Sunrise Movement members asked a number of questions at last month’s CNN climate town hall and have rallied across the nation.

“What they want to say and what they want to do is entirely up to them, but our role is to amplify them, and if they’re interested, educate them,” said Jason Snell, a Sunrise Movement leader in Cedar Rapids.

The Cedar Rapids chapter last week was recognized by the national chapter as one of the top hubs in the nation, Snell said, partly because of political activism attached to the Iowa Caucuses.

“That’s one of the advantages of being here. One of the reasons to strike is to get the attention of policymakers, but the policymakers are already here and we have their attention,” Snell said.

Throughout the weekend, the young women from Linn Mar wanted to know how youth activism had affected the candidates.

At his climate town hall Friday in Cedar Rapids, Biden called climate change the “single most important issue in any of our lifetimes,” regardless of age, but gave a nod to the youth efforts. Iyer even asked one of the town hall questions.

“We’re here this afternoon as people around the country and the world are proclaiming global strike day,” Biden said. “Young people know something that this President of the United States doesn’t know: Climate change is an existential threat in the most literal sense of the word in terms of all humanity.”

At the Castro climate forum, Iyer asked, “How have young climate activists impacted your campaign?”

“Young people have always had a role in inspiring and being at the leading edge of issues, and pushing us, and I think that’s what you all are doing now,” Castro said. “To be bolder, and to think more about how we can tackle these issues.” 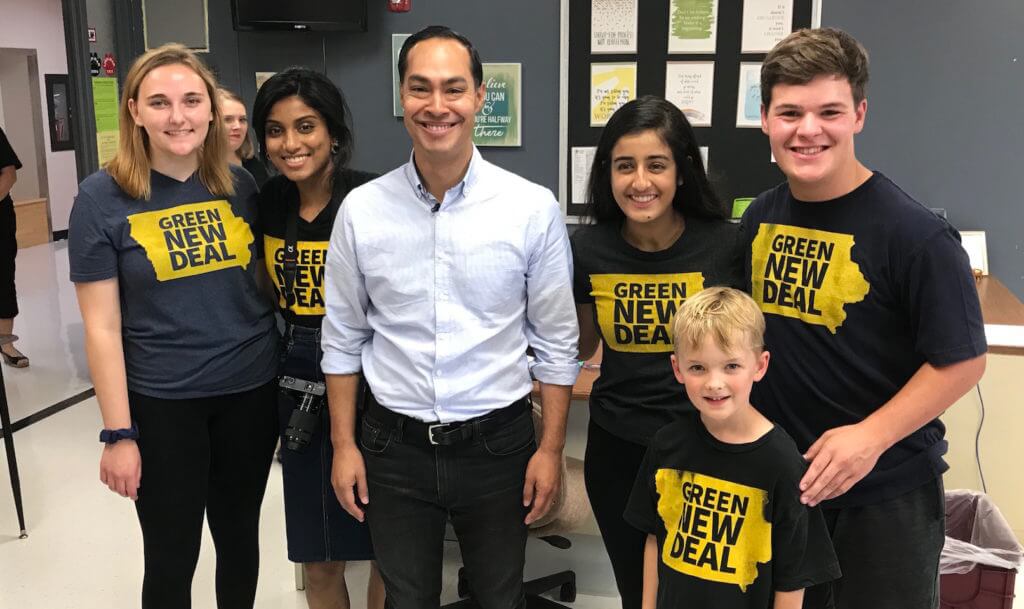 In fact, Castro said his team reached out to advocacy organizations and a lot of staff powered by young people to put together his climate action plan.

“It’s very much informed by the views of this younger generation of Americans that absolutely sees this for the urgent matter that it is,” he said. 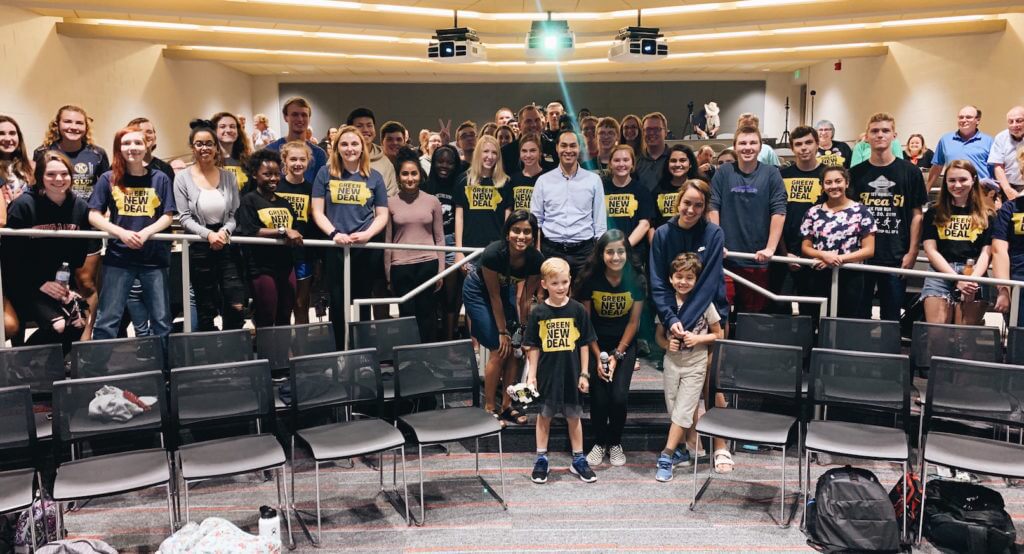 Kalia said she also wanted the weekend’s youth activism to highlight the severity of climate change, and inform new voters.

Gracie Viers, a 14-year-old freshman at Linn Mar, said she attended the Castro forum to learn more about climate.

“This is a new thing for me. I thought I’d come and learn what it’s about. I want to learn how to help more,” she said.

Three years ago, Kalia got involved in climate activism when she convinced her father, who owns a restaurant, to switch from Styrofoam to-go containers to compostable ones.

Kalia’s parents were born in India, a country she has visited often.

“Just seeing how third-world countries are dealing with climate change, and just the trash, the pollution, everything. Seeing that firsthand just kind of woke me up,” Kalia said.

“We’re going to experience it firsthand like so many third world countries already are, and I really feel like the youth is so on the issue right now because they understand that it’s going to be affecting us. You have to open your eyes up to what’s happening.”