Latino Heritage Month in Iowa can be very special. As a longtime Latina resident in Des Moines, I was thrilled to learn I would interview one of my personal heroes.

Watching this tiny, 5-foot-tall woman walk toward me amazed me at how she was able to fight for workers, farmers, immigrants and women’s rights for decades. At 89, weighing about 100 pounds, you know she has an inner strength not many possess. Like many Latinas, I grew up wanting to be like her, to have her courage, to be a guerrera (warrior) that never quits. 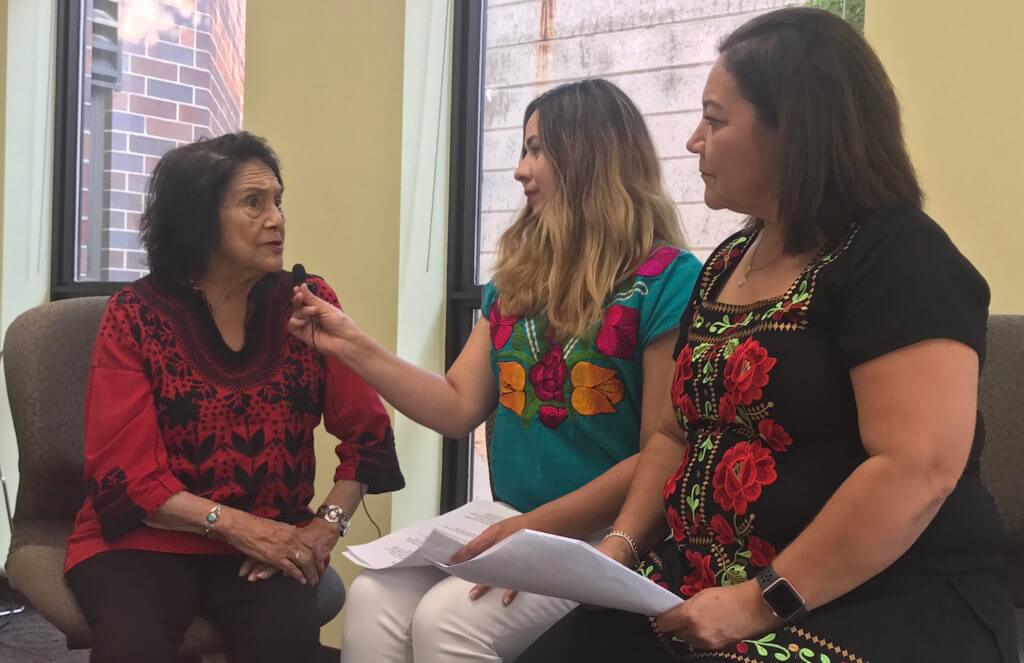 Dolores Huerta came to Des Moines for a day at the invitation of Chrysalis Foundation, a nonprofit organization dedicated to empowering and supporting the success of girls and women. Huerta, the keynote speaker, addressed about 500 people at the Inspired Luncheon. She also was honored at Des Moines University for her lifelong dedication and work for social change.

At the beginning of our interview, Huerta said that although Latinos constitute only about 5% of Iowa’s population, “We can still make a difference during the Iowa Caucuses and the 2020 elections.”

She pointed to Virginia, with a Latino population of about 8%, and how instrumental the community there was in electing two Democratic governors.

“We just need to be disciplined and organize,” Huerta said.

As an activist, she not only has fought for farm workers and immigrants, but also for women’s rights. At the end of the 1980’s, after being beaten by police during a protest, she took an interest in empowering and encouraging Latinas to run for office.

As a result of her efforts, there was a significant increase in women elected at the local, state and federal level.

Since she deeply believes in empowering women of color, it was not surprising she endorsed California Sen. Kamala Harris for president. She also is a co-chair of Harris’ 2020 campaign.

“I’m supporting her because in California when she was attorney general and as a senator, she has been fighting for social justice,” Huerta said. “As attorney general she created a program where the Department of Civil Rights would have a presence in the schools to monitor what was happening to Latino and African American kids that were being discriminated.

“Kamala is part African American and part Indian, and she has experienced many things that we have gone through as a community,” she said. “So, you don’t have to teach her about our struggles, she knows and she identifies herself with our community.”

Huerta talked extensively about the importance of voting as an agent for social change, expressing that many Latinos don’t vote because they don’t know how.

“Even in California where the ballots are in Spanish, they are confusing and complicated,” she said. “We need to do a better job explaining our people how to vote.”

Also, an important Census count is coming in the spring of 2020, she said.

“It is extremely important that we are counted, so our cities get the money for each of us,” she said. “The federal government need to know how many of us are.”

When asked how she wanted to be remembered, Huerta said she wanted to be thought of as an organizer because they are needed to fight President Donald Trump’s attacks against the Latino community, and because organizing can help better a community.

After spending time with Huerta, I know what keeps her going; you can feel her passion for social justice and equality, you can feel the fire that moves her to fight against discrimination.

Huerta ended our interview by making a call to the Latino community: “We need to keep going, get involved, and remember, ‘Si Se Puede!'”

Huerta and I hugged, because that’s what we Latinas do!