“Of course we all know it is the season in Washington. Government agencies are going on their annual Christmas in September, use-it-or-lose-it shopping spree,” said Ernst, Iowa’s junior Republican senator. “If not spent by midnight on Sept. 30, leftover dollars expire and can no longer be used.”

And so began Ernst’s show on the Senate floor.

She joyfully pulled out a giant picture of a lobster and crab dressed in top hats and monocles. The lobster was holding a wad of cash.

“Let me tell you folks, Iowans and hardworking folks across the country really should be appalled by many of the last minute purchases our tax dollars are paying for,” Ernst said. “And I’ll just give you some examples. Right here, $4.6 million were spent on lobster tail and crab. $2.1 million dollars spent on games, toys and wheeled goods, over $53,000 on china and tableware, more than $40,000 on clocks.”

Ernst then grabbed another large picture and put it on an easel behind her. This time the picture was of a Foosball table. 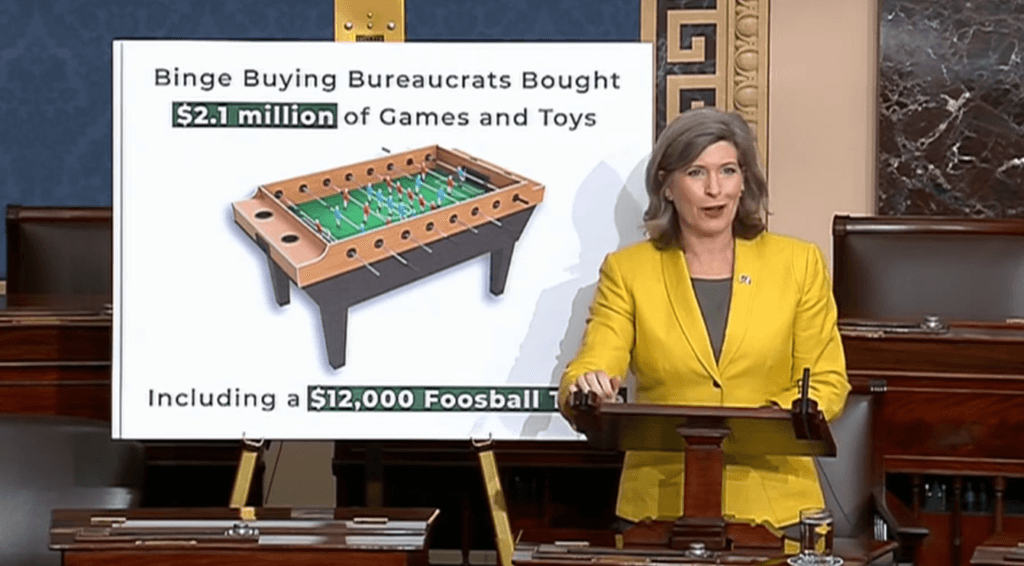 Washington bureaucrats spent nearly $12,000 on a Foosball table, she said. She later said that instead of giving money back to taxpayers at the end of the year, “federal agencies ordered lobster tail and tons of — get this — tater tots.”

A renewed call for impeaching the President happened over the weekend when it was reported Trump allegedly withheld $391 million from Ukraine days before he pressed the country’s leaders to investigate his Democratic rival Joe Biden.

Ernst has yet to comment in-depth on the matter, despite being a part of the Senate Ukraine Caucus. She also has a long history of standing up for Ukraine, but had nothing to say as the President she supports allegedly threatened the country’s defense against Russia in order to bring more foreign interference into American elections.