“Anybody want a beer?”

South Bend Mayor Pete Buttigieg yelled into a crowd of frantic supporters following his lap around the Polk County Steak Fry. The democratic candidate had just led a rally of around 1,300 supporters into the Water Works grounds and was now bartending beer after flipping steaks on the grill.

But the frenzy around Buttigieg didn’t begin in the Steak Fry grounds. The mayor’s campaign bought two lots outside on the ground’s periphery and was able to fill the space— the large number of supporters and over 100 staff member—in addition to volunteers— came to support the candidate.

“I think he has the best ground-game in Iowa,” said Susan Matos, who works in healthcare, from Bettendorf, Iowa. “I notice his supporters more than anyone else. I think his supporters have gone a bit unnoticed but I think the Steak Fry is going to put him on a platform. I was blown away at how many of his supporters were here.”

Supporters of Buttigieg said they endorse the candidate because of this more moderate positions, electability and his character.

Marie Nolan, 20, is from Northern Minnesota but attends Drake University.

“I’m from a rural area, where Obama won twice, and then Trump won by 20 points. I know what it would take to flip the area again,” Nolan said. “Pete can really speak to rural communities because he’s from there. [Rural areas] feel really condescended by some candidates, but I can see people back home voting for Pete.” 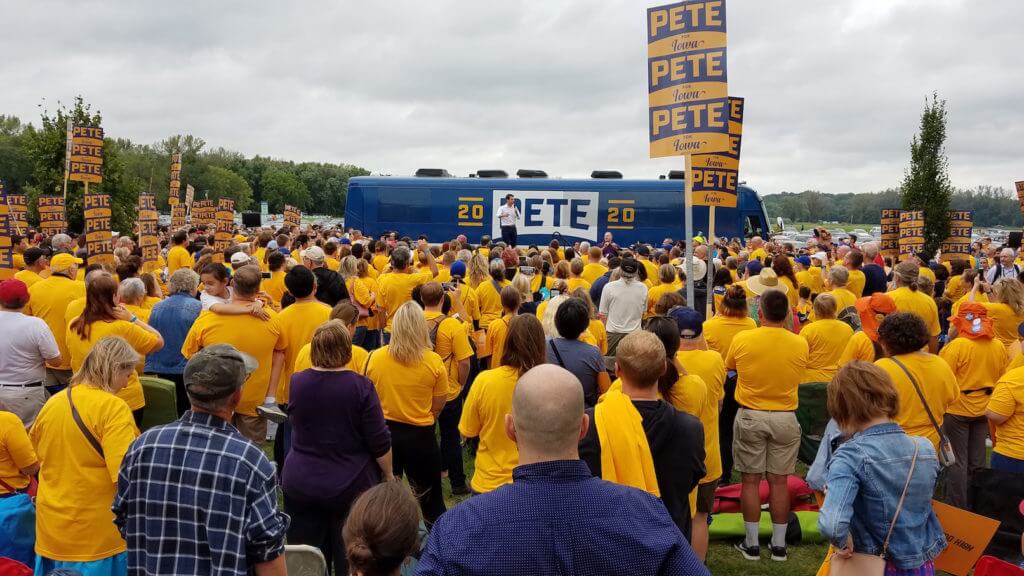 “He couldn’t lie if he tried,” said Emilyn Crabbe, 20, who also attends Drake University. “The first thing I noticed was his honesty. What I want America to be — I see in him.”

Buttigieg’s pre-rally included speeches from several of his endorsers, one of which was Linda Langston, a former Linn County supervisor. She began her speech by asking where the crowd would be on caucus night.

“There is so much crisis out there. What the HELL are we going to do?” Langston said. “We need someone with vision, passion and values, and we have Mayor Pete today.”

Then came the arrival of the Clay Colonials, South Bend’s high school marching band. The band left Indiana by car at 1 a.m. Friday, a member of the Buttigieg team said. 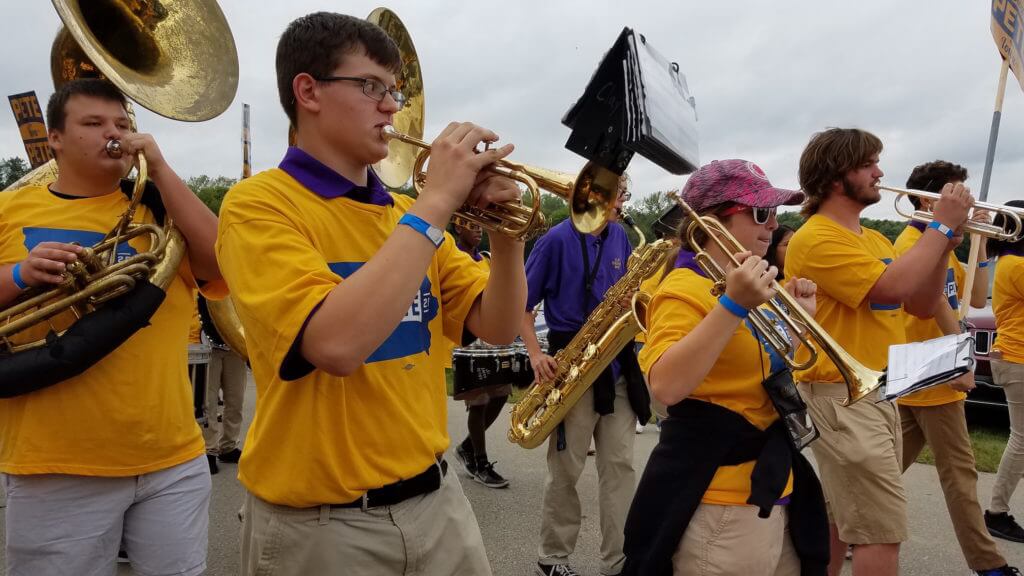 The Colonials led the rally into the Steak Fry grounds with the mayor. A seemingly never-ending crowd followed, holding signs that said “The Steaks are too high,” among other things. There was also a Buttigieg supporter in an inflatable T-Rex costume.

When it came time for Buttigieg to take the stage at the Steak Fry, the crowd swelled with an audience in ‘Pete 2020’ shirts. The rest of the crowd gave the candidate a standing ovation.

Buttigieg highlighted unity in his speech. “We are getting more and more divided and it is beyond politics,” he said. “We’ve got to do this together. That’s how we win.

He also promised the crowd a presidency that wouldn’t constantly stress their minds and that could actually pass the proposals they advocated for in the campaign.

“Picture a presidency where when you turn on the news and see the White House, your blood pressure goes down,” he said. “Picture a White House that can deliver Medicare for all who want it, trusting you to decide if a public alternative is better for you than those corporate private plans.”

13 Comments on "Pete Buttigieg Makes His Statement At Steak Fry"