While they may disagree about how to expand health care and handle student loan debt, Democratic candidates for president are on the same page when it comes campaign finance reform.

Beto O’Rourke: “A campaign by all of us for all of us that answers not to the PACs, corporations and special interests, but to the people.”

Elizabeth Warren: “We also need to end the unwritten rule of politics that says that anyone who wants to run for office has to start by sucking up to a bunch of rich donors on Wall Street and powerful insiders in Washington. So I’m opting out of that rule. I’m not taking a dime of PAC money in this campaign.”

The battle against dark money in elections may be the key to winning over the coveted bloc of Independent voters.

GQR Research and End Citizens United, in Washington, D.C., conducted a poll after the 2018 midterms showing 75% of Independent voters ranked corruption in politics as a “very important” issue. 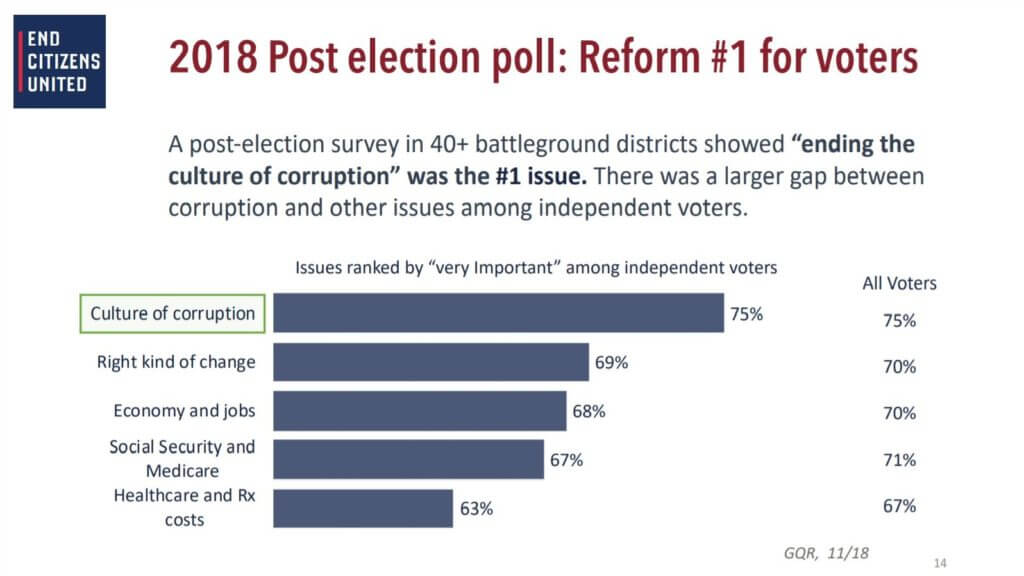 The question ranked higher than issues like the economy and jobs, Social Security and Medicare, and health care and prescription costs, though they still ranked around 70%.

In pivot counties — those that went for Barack Obama in 2008 and 2012 and flipped for Donald Trump in 2016 — Global Strategy Group found voters overwhelmingly viewed corporate lobbyists, special interests and PACs unfavorably.

Voters who viewed PACs unfavorably had a much higher opinion of small-dollar donors. 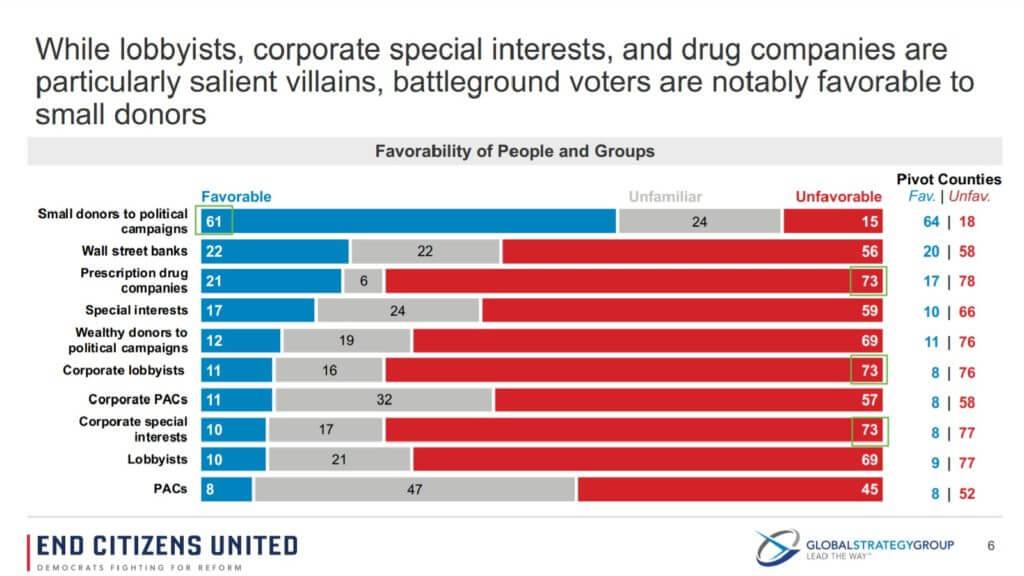 Most of the candidates have turned to people who give small amounts of money at a time as a source for campaign contributions. According to the Washington Post, Sens. Bernie Sanders and Elizabeth Warren have raised the most money that way.

Importance Of The Battleground

And while many other campaign issues can be polarizing among voters, it’s the anti-corruption messages that seem to unite all parties.

According to a majority of the battleground voters surveyed, politicians who support special interests deserve the most blame for money’s influence on American politics. Right behind that, people blamed the politicians who voted in the interest of their corporate donors.

In pivot counties, 60% of voters thought getting rid of big money in politics should be a top priority. They believed no other significant reforms they cared about, i.e. health care, education and climate, would be accomplished without addressing the dark money problem. 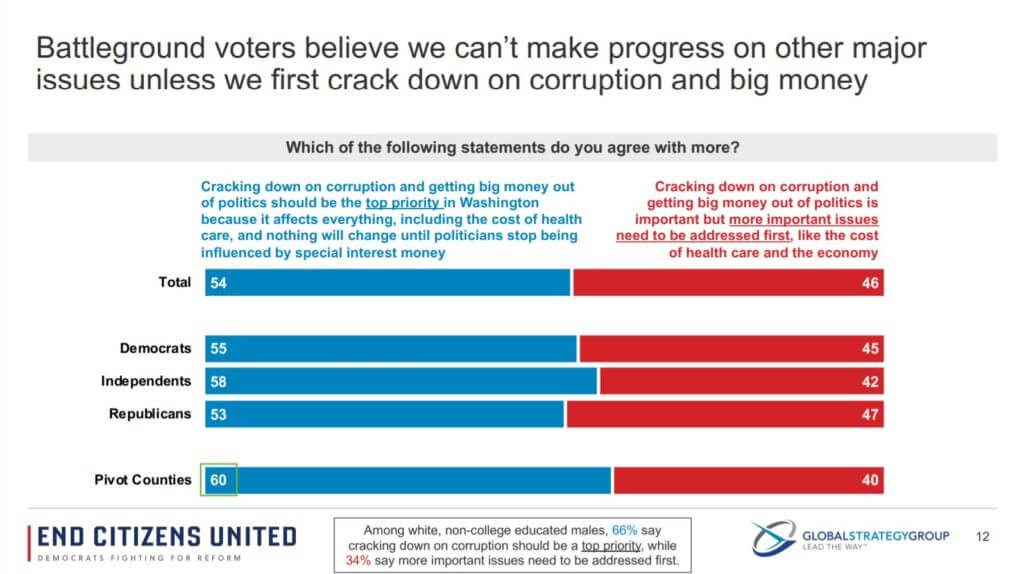 In 2016, 52% of voters said they trusted him to take on special interests. Now, a Gallup poll showed 60% of voters disapproved of how Trump has handled corruption in the government. 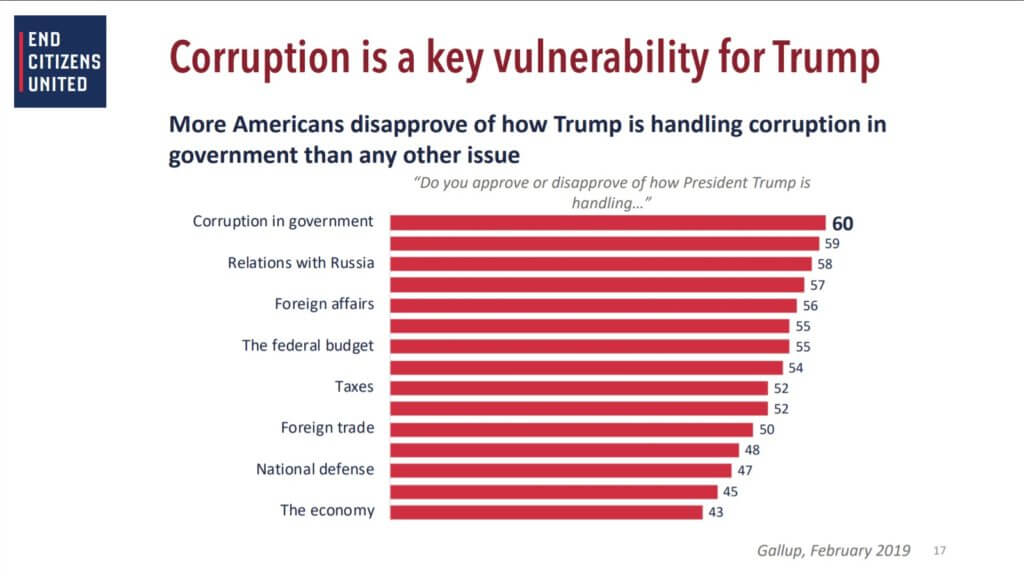 And in battleground states, a majority of voters thought of him unfavorably, though the margin was smaller in pivot counties.

So, what should Democrats do?

Data suggest Democrats run against corruption and special interests because of the way people view the two issues and how much faith voters already have in Democrats to address those problems.

In 2018, many Democratic candidates had messages about campaign finance reform. In several cases, like U.S. Rep. Max Rose in Staten Island, New York, that kind of message was key to electoral victory.

A month before the 2018 election, 107 Democratic candidates, including J.D. Scholten from Iowa’s 4th District, signed an open letter calling for Congress and its candidates to prioritize campaign finance reform. And it happened.

H.R. 1 aims to increase transparency in campaign finance, as well as expand voting access and support election security. It was championed by Democrats who told voters the bill was crucial to making progress on other issues they cared about.

Judging by recent polling, those types of reform aren’t just good for democracy in America, but also helpful in regaining trust of voters.

3 Comments on "Poll: Campaign Finance Reform Resonates With All Voters"