Cost-burdened Iowans who rent housing may see tax benefits if certain Democratic hopefuls make it to the White House in 2020.

Nearly a third of Iowans rent their homes, of which 40% are “cost-burdened” — paying more than 30% of their income on rent, experts say. Among several Democratic presidential candidates’ varied plans to address the growing concern is a relatively novel policy idea meant to give money back to renters in the form of tax credits.

“[Renters] that are finding themselves paying 40 to 50% or more of their monthly income to their monthly housing costs, that’s our biggest and most critical crisis on the front of affordable housing,” said Anawim Housing president Russ Frazier, an affordable housing developer. “We need to continue to see the federal government remove some barriers.”

The credits allow renters to deduct a certain percent of the rent they pay from their federal income taxes. Then taxpayers would get a credit worth any amount in rent they pay over 30% of their income, to cover the difference.

How Candidates May Implement The Credit

Harris introduced the idea of renter’s tax credits as a Senate bill in 2018. Her “Rent Relief Act” was never passed, but proposes the credit be available for families earning up to $100,000, reimbursing only a portion of the rent above 30% of income, depending on the taxpayer’s earnings.

Booker’s plan capped the tax credit at neighborhood fair market rent. In Iowa, a two-bedroom apartment at fair market price averages $900 per month in Des Moines, $1,011 in Iowa City or $535 per month in Benton County, according to U.S. Department of Housing and Urban Development data. 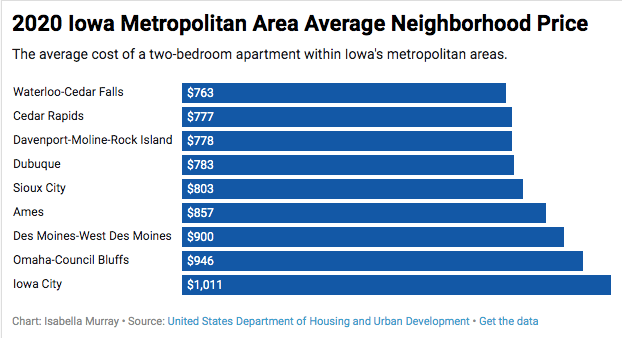 “In Iowa, compared to other states, we haven’t really addressed affordable housing in a comprehensive way,” said Seth Johnson, director of opportUNITY’s poverty reduction initiative. “Affordable is such a broad spectrum in our community because we’re a low-wage state.”

Covering renters who make between 50 and 100% of the area median income, Castro’s plan would also take into account area market rents.

Under Castro’s tax credit proposal, renters would be paid monthly. The plan also allows participants to direct their credits to a tax-advantaged savings account to be used for a down payment on a mortgage.

“For years [mortgage interest deduction has] been touted as an incentive for homeownership,” Burmeister said. “A lot of folks who are homeowners don’t need federal income taxes to reduce their income. They make enough money. The problem is that renters don’t get that same sort of tax credit, yet they’re the ones that in many cases are really struggling to make ends meet.”

But the idea may become more complicated if implemented.

The credit will cost the county trillions, according to the Wall Street Journal’s editorial board. While highlighted by Harris, Booker and Castro as being instrumental in providing relief to low and middle-income renters, the credits may benefit renters who aren’t as needy, too.

“How do you say that this credit is only available to renters that make over $15 an hour?” Burmeister said. “The devil’s in the details of all of that.”

1 Comment on "How 2020 Candidates’ Renter Tax Credits Would Work"