Dave Stephen, a carpenter from Cedar Rapids, enjoyed his day off on Monday by attending the Hawkeye Area Labor Council’s Labor Day Picnic at Hawkeye Downs, where five presidential candidates mingled with the crowd.

Dave hasn’t retired yet, he said while holding a Warren 2020 sign for his wife, because he’s not sure how he and his wife will afford their health care in the future.

“We need a whole revolutionary different way of treating sickness and taking care of everybody,” Dave, a Joe Biden supporter, said. “It needs to be completely different.” 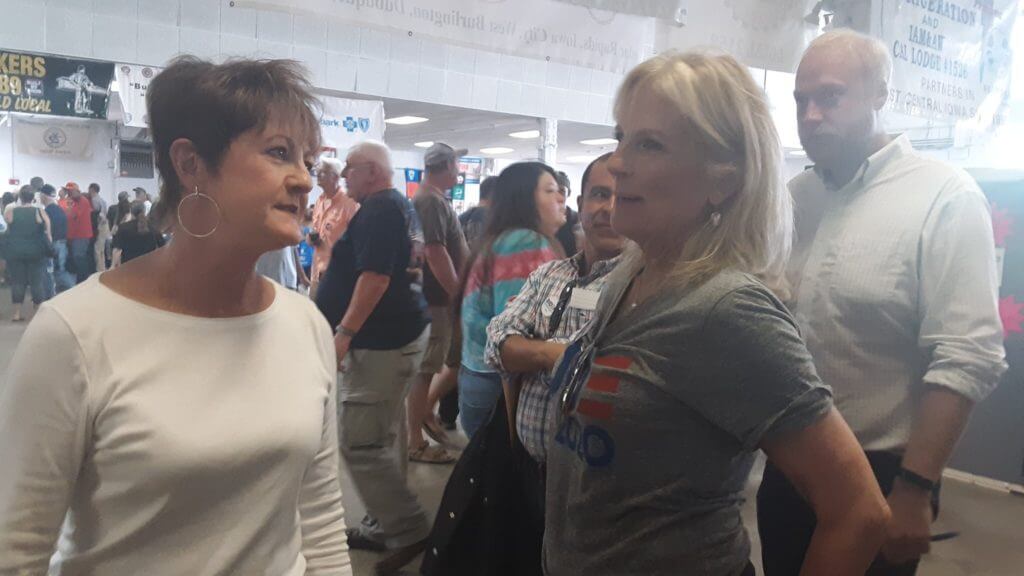 Dave said he’s still waiting to see whether Biden will provide the wholesale change to health care he’s looking for.

“His thing is expanding Obamcare,” Dave said. “Which, I don’t know. It might work out. I need to see some details on how that’s going to work.”

Dave and Margie explained they’re frustrated with the current health care system because their daughter has diabetes and her work’s insurance didn’t cover the full costs, forcing her to work extra jobs to pay for everything.

“Part of this problem is the price of prescription medication,” Dave said. “She has to work three jobs to pay for her medication. It shouldn’t be that way.”

Margie, who was a long-time Biden supporter, said she’s now leaning toward Elizabeth Warren or Bernie Sanders because of their detailed plans for universal health care.

She said she’s not concerned about unions getting stripped of the health insurance plans they’ve worked hard for because “the premiums are just too high.”

“The insurance companies get to dictate what procedures we get and when,” Margie said. “I think it would be more fair if we had Medicaid and Medicare for All.”

Biden drew out quite a few supporters at the Labor Day picnic, which he and his wife Dr. Jill Biden attended.

Deb Barger and Char Jaeger, both 46-year union members who retired from Rockwell Collins Aerospace, were holding signs and happily showing their support for the former Vice President. 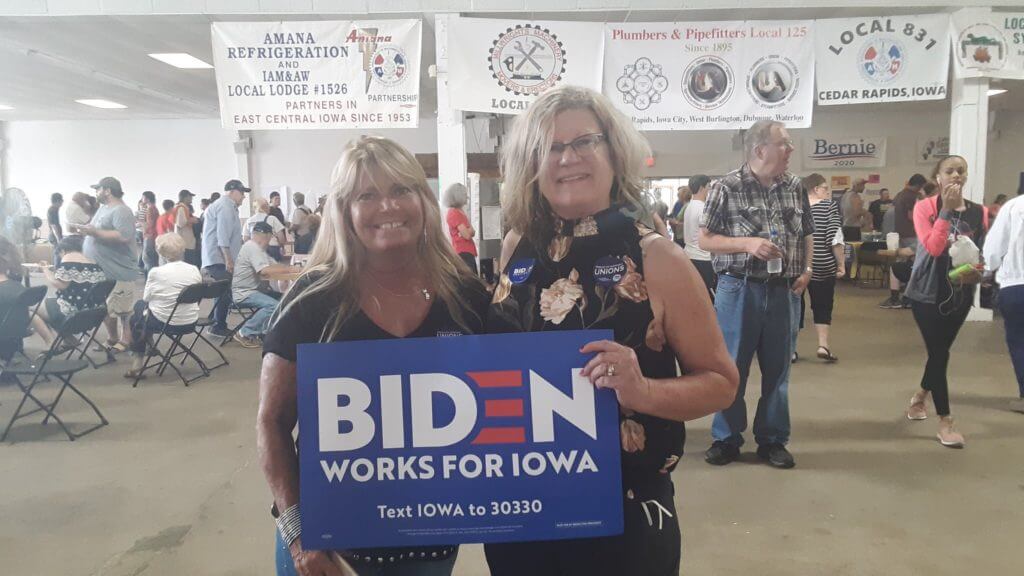 “He was an excellent Vice President and whenever he spoke I thought, ‘I wish he was the President because he’s so good,’” Barger said. “I’m stuck on him.”

“He’s got morals. He’s compassionate. He looks out for the people,” Jaeger added. “I have a lot of respect for a man like that.”

The two listed wages, insurance and support of the unions as issues they’re contemplating during this election cycle.

And they were impressed by the large crowd of union supporters who turned out to see Biden, Amy Klobuchar, Michael Bennet, Pete Buttigieg, Steve Bullock and Martin O’Malley, who was representing the Beto O’Rourke campaign at the Labor Day picnic. 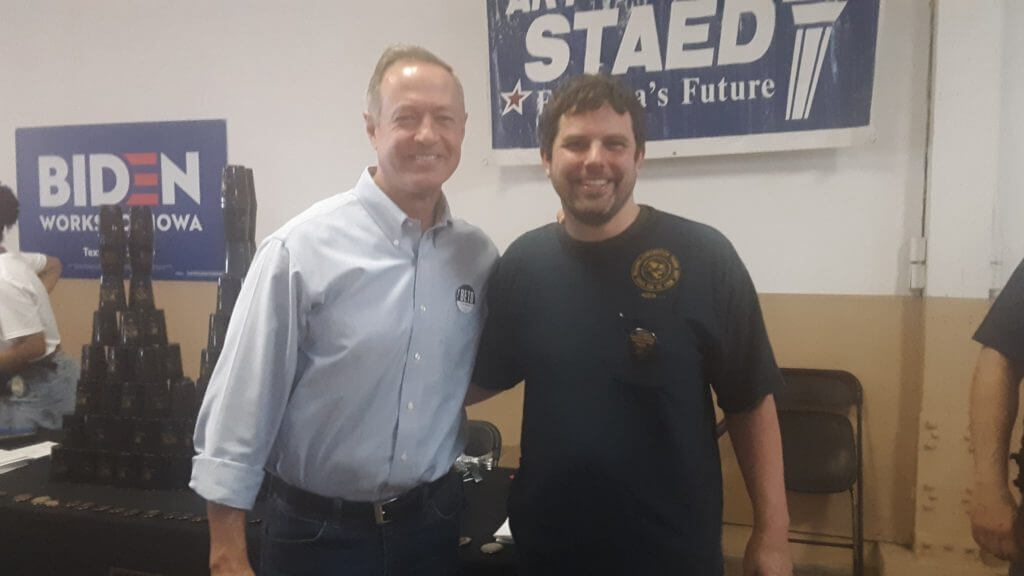 Rick Moyle, president of the Hawkeye Area Labor Council, said he expected between 1,700 and 2,000 people to attend this year’s event.

“I’m proud of everybody who is out here,” Jaeger said. “There’s generation of labor workers out here and they’re the backbone of the country.” 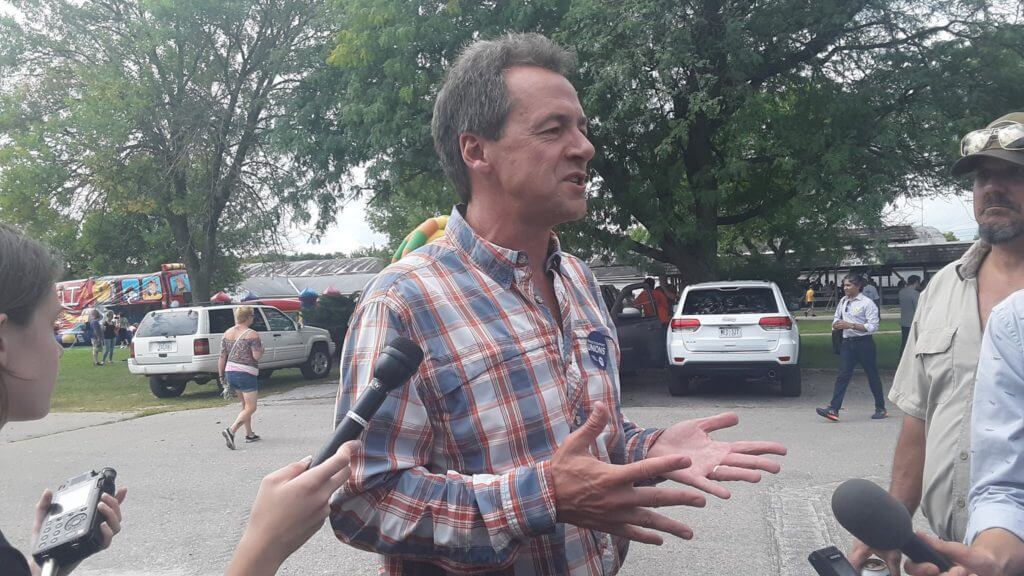 Adam Wright, who considers himself a union ally and is a member of the local county central committee in Linn County, was also glad to see the big crowd at the picnic.

Wright got to meet the second candidate on his list of 2020 Democratic presidential contenders he’s most likely to caucus for at the picnic. 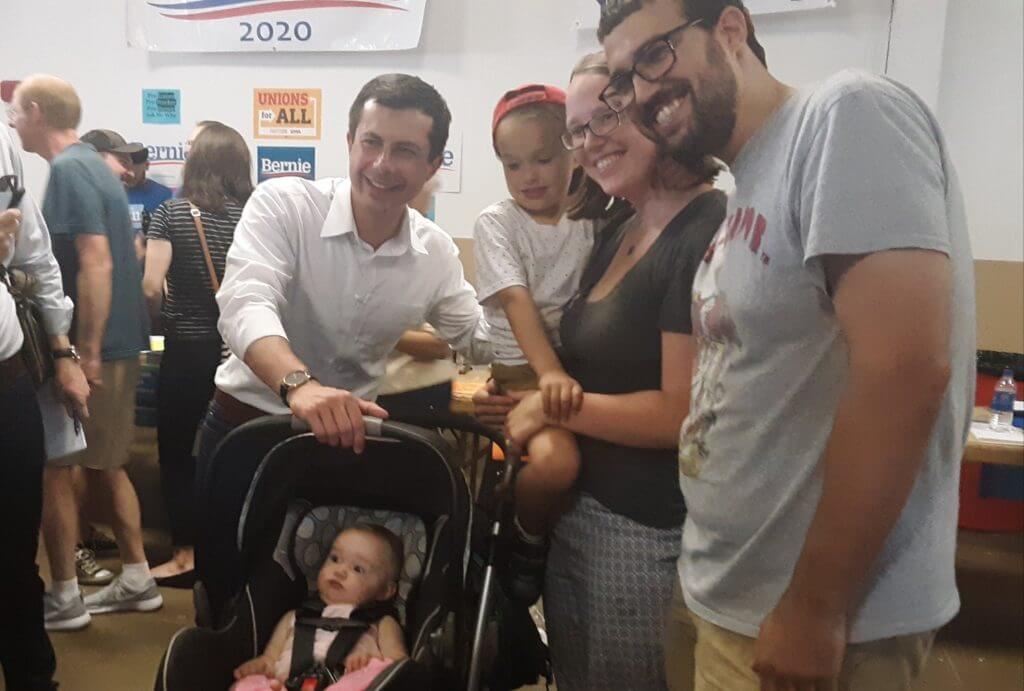 “My two main issues are mental health, and I actually had a conversation with Mayor Pete on this earlier,” Wright said. “I lost my best friend from college to suicide five years ago after a battle with schyzophrenia.”

“He was an upcoming activist and he fell through the cracks with the system,” Wright explained. “I’ve been telling his story to presidential candidates ever since.”

The second issue he’s worried about his electability. He wants to support a candidate who can beat Trump.

Bill Gerhard, the president of the Iowa State Building and Construction Trades Council, is confident Biden can beat Trump and get the job done.

He said he supports Biden in part because he’s been with the labor movement his entire life.

“He will do a great job,” Gerhard said. “He’s the most experienced person here. We need a steady hand at the wheel, I think.”

“We need to win the election and get someone back in the White House that’s fit to be President,” Gerhard said. “Someone who knows what to do and heal the wounds with our allies over the trade wars.”