As family planning clinics across the country face a mounting number of obstacles to providing health care, the conversation often is focused on abortion services and birth control.

STD rates have gone up across the country, according to the Centers for Disease Control and Prevention.

The Impact On Iowa

State health officials say the rates are particularly high in Southeast Iowa, though every county with a large population reported high rates of infection. 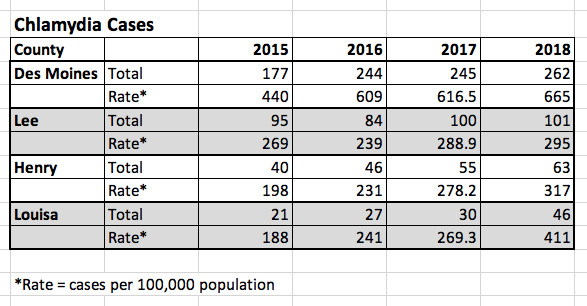 In Burlington, Iowa, most of the work done by Family Planning of Southeast Iowa is STD testing.

The clinic opened in 2018 to replace the Planned Parenthood clinics in Burlington and Lee County that closed in 2017 due to a lack of state funding.

“I think it’s probably a very good thing that, during the time that Planned Parenthood was closed, the health department started to do testing as well,” said Cherry Klein, director of Family Planning of Southeast Iowa in Burlington.

Most people don’t show symptoms of chlamydia or gonorrhea, so regular testing is essential to determine whether a patient has an STD.

Planned Parenthood announced this past week it will leave the Title X funding program. The move is in response to the Trump Administration’s rule prohibiting Title X recipients from making referrals to doctors who perform abortions, or informing a patient where they could obtain an abortion.

When the state of Iowa said in 2017 it would take away Medicaid funding through the Iowa Family Planning Waiver to health care providers associated with abortion services, four Planned Parenthood clinics closed. Now that the rule is in effect nationwide, more clinic closures are likely.

The Department of Health and Human Services rule was announced in February and has been challenged in court by Planned Parenthood and other health care providers in multiple states.

But in July, a federal appeals court ruled the policy change could take effect while the legal cases were pending.

Mary Costello at the Iowa Department of Public Health said it was hard to tell what caused the rise of STDs in Iowa.

Based on personal interviews, she believed some of the increase was due to out-of-state workers and new Iowa residents.

“I think in some cases we have folks that are coming from out of state that are there working, you know sometimes on a long-term, temporary basis,” Costello said. “I think we also are seeing some connection to increase in substance use.”

Some of the high numbers could be connected to an increase in testing, she said, but that likely has had a limited effect.

“With the loss of the Planned Parenthoods and the access to care, there were several of us that did a lot of work to educate the clinics and hospitals in Southeast Iowa, just about what we were seeing,” she said, suggesting the department’s emphasis on the issue could have led to more testing and treatment.

“I think that, while there’s many good providers in the area, oftentimes their focus is overall health care. Many of the times people are going in — whether male or female — to these specialty clinics like a Planned Parenthood, specifically for their sexual health or concerns they have,” Costello said. “And I think that a clinic like a family planning or a Planned Parenthood clinic offers people a safe place to go and have that conversation.”