The list of Democratic presidential candidates who attended the Iowa State Fair was so long this weekend it forced undecided voters to choose which of the 20 candidates they wanted to see speak at the Des Moines Register Political Soapbox the most.

Boldt, of Des Moines, said he likes that Steyer is a business man and said he has a good way of getting his message out to everyone.

It was the first time Boldt watched Steyer speak in person, and he thought he was “excellent.”

“This guy versus Biden would be a great debate,” Boldt said. “[Steyer] has a great look at this situation outside of politics, and he doesn’t come with the thirty years of baggage from being in politics for so long.” 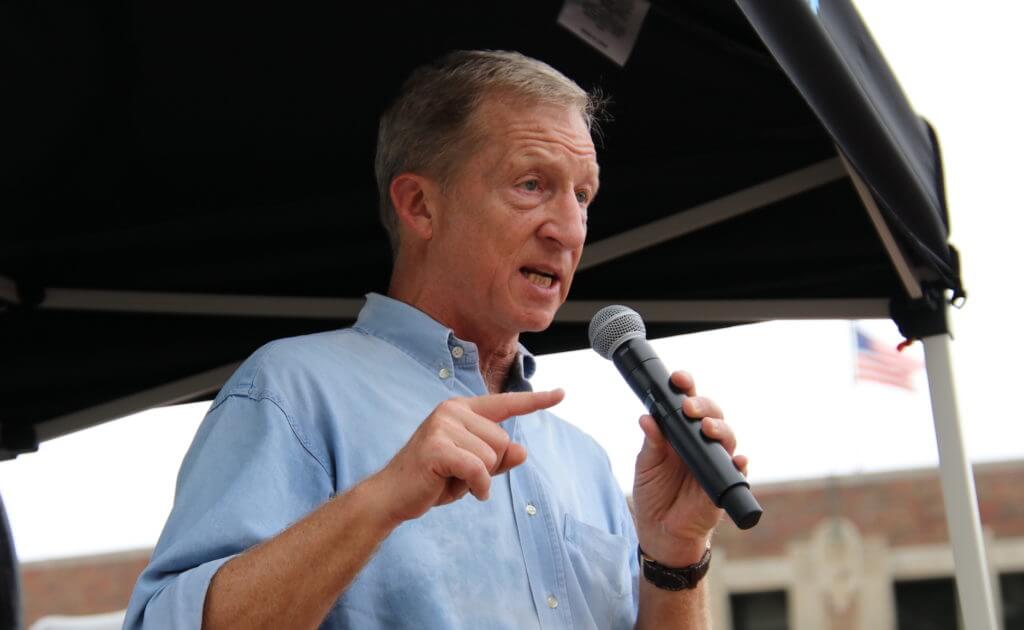 Mom and son duo Luke Sinclair and Karen Austin of Carlisle had a list of three candidates they were most excited to see — Cory Booker, Elizabeth Warren and Jay Inslee.

“Climate change is a very important problem that needs to be at the forefront of today’s politics,” Sinclair said. “I don’t see it being a priority coming out of every campaign.” 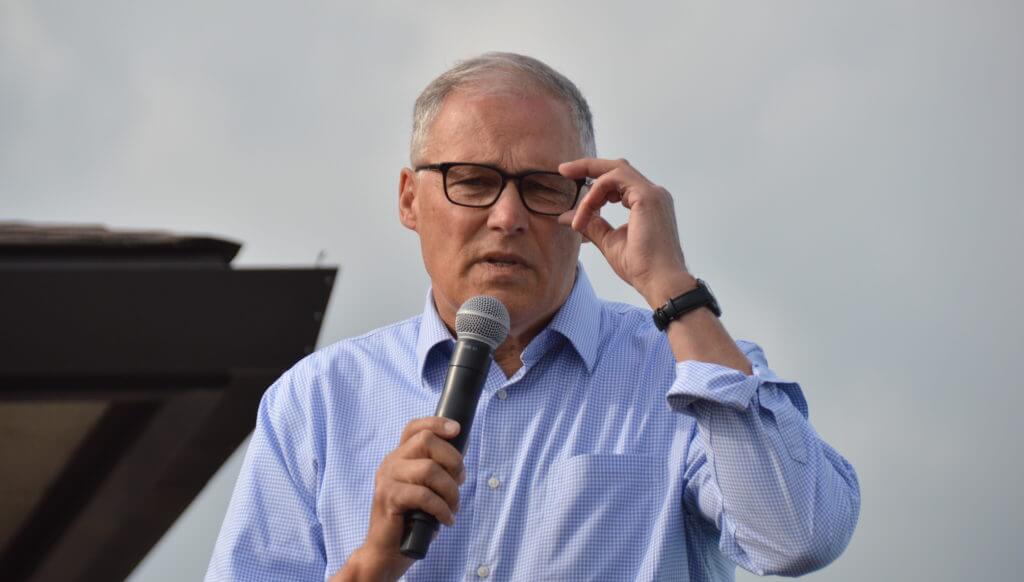 The young Democrat is also particularly interested in criminal justice reform, which is why he put Booker on his list.

“The criminal justice system is broken,” Sinclair said. “We have a lot of people who are in prison who shouldn’t be. People are being prosecuted for marijuana offenses shouldn’t be in there anymore.”

Sinclair’s mother said she was looking forward to watching Warren most, although she said she isn’t sure who she will caucus for yet.

While Austin said she likes Warren’s plans overall, she’s not sure how she feels about Medicare for All.

“I’m a little worried about some of the stances on Medicare for All, because people do want to keep their private insurance,” Austin said. “I think I like some of the plans that mix that part up more and take incremental steps.” 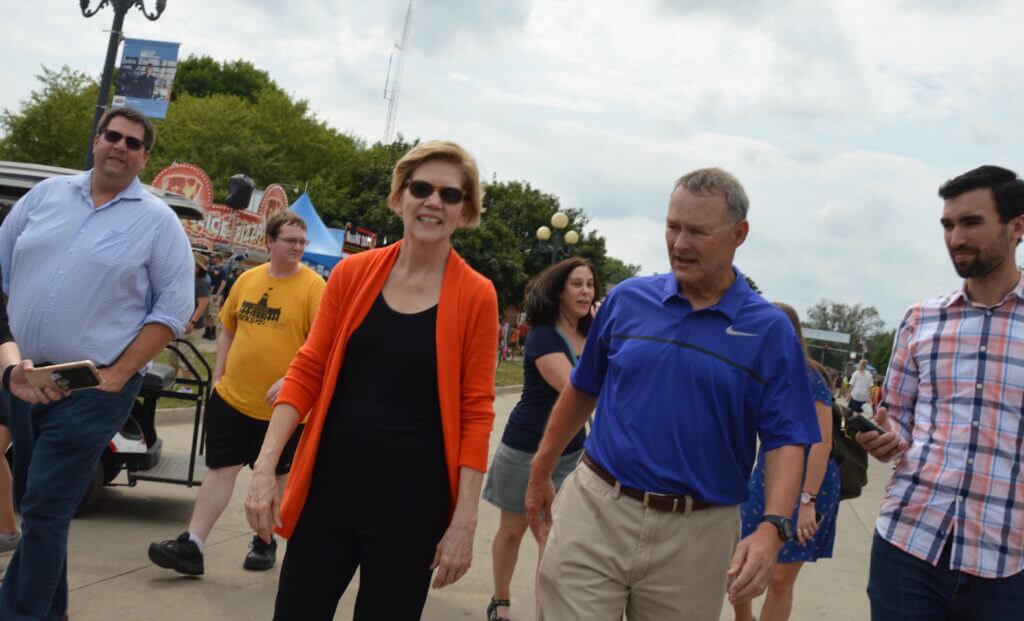 “I’m not sure wholesale change is the way we really want to approach it,” Austin said. “I want to make change, but I’m not sure it can be done in huge steps like that.”

Austin likes Governor Steve Bullock, too, but she’s not sure if he has the ability to break through the crowded Democratic field.

“It still feels so early,” she said.

Gary Neuzil, a 57-year-old Iowa City West High School teacher, is undecided, but he agrees the crowd of Democrats might be a good thing for the party.

For example, he said Marianne Williamson is attracting folks who aren’t usually tuned into politics.

“I agreed with her when she said there are internal political forces that do prevent outsiders from having an equal opportunity as those on the inside,” Neuzil said about Williamson. “Her message can be outside of the box, but then you start listening to other people too and it’s far better than turning everything off.” 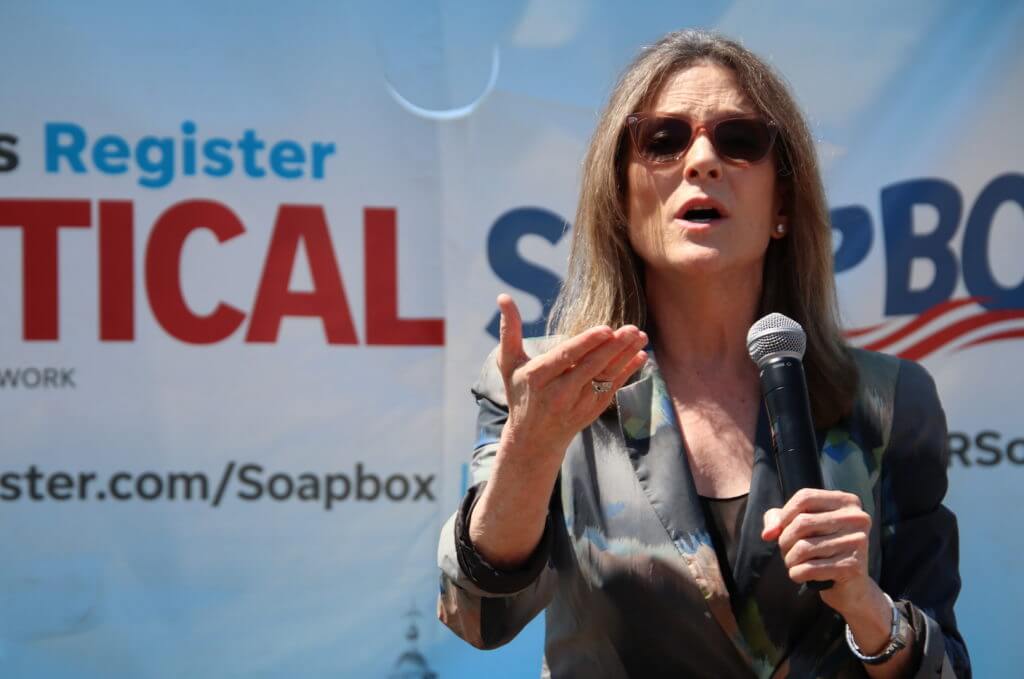 He said he likes Gabbard because he used to live in Hawaii and because he supports Gabbard’s military record. He said he thinks Harris is an eloquent candidate and she has an innate ability to get her point across.

Kondara, a long-time Democratic voter before his 2016 vote for Trump, said he “really liked those two as a ticket.”

“Even though Trump’s making a lot of mistakes right now, he’s still president. He’d be better off just keeping his mouth shut,” Kondra said. “He likes to stir up controversy with immigrants and stuff.”

He said there are 10 or so Democratic candidates who are not speaking the “true Democratic line.”

But, he said there’s truth in Gabbard and Williamson’s words.

“Everything I’ve heard today rings of truth,” Bruce said. “Our political system is broken. And who wants to fix it? Not the Democrats. Not the Republicans. We need some people who have new thoughts.”

“I was a Marine officer for years and years, so my heart kind of goes with Tulsi,” Bruce said. “But, I have a Master’s degree in psychology, and so I like Marianne’s philosophy that we can do better.” 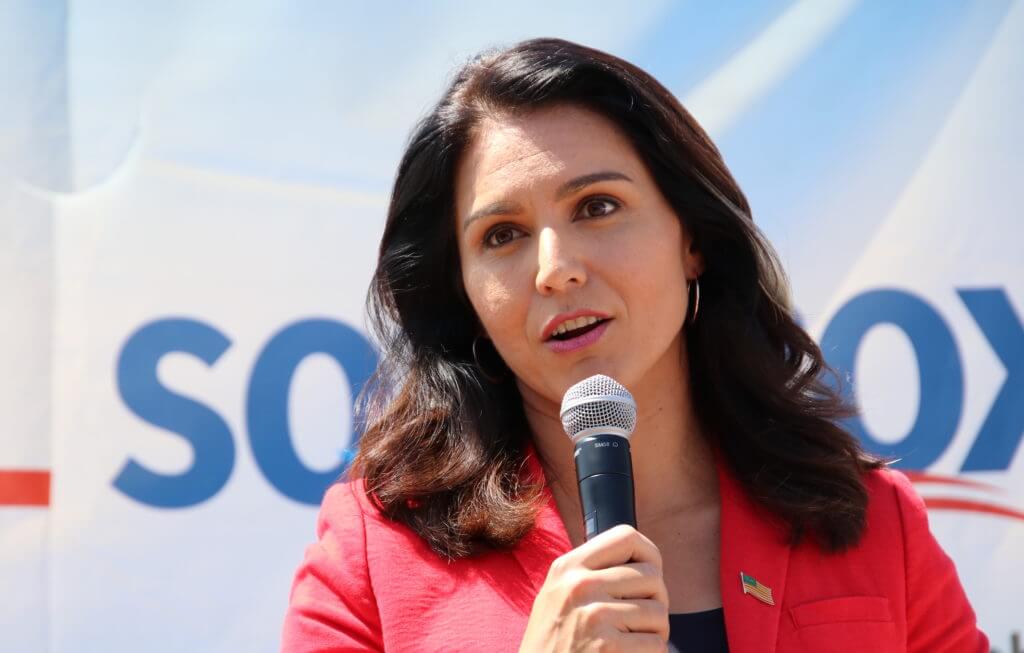 Hannah Johnson, of Des Moines, decided to hear Harris and Kirsten Gillibrand speak Saturday, but skipped many of the other candidate’s speeches.

She said the two seem to be more put together than some of the others.

She said when it comes down to it, she will vote Democratic no matter who the nominee is, but she said it’d be amazing to have a woman in the White House.

“I think it’s such an important step that we have, especially in equality,” Johnson said. “It’s important because so many women are under counted and discounted, and for all the little girls who are like, ‘oh, I want to be president,’ that’s huge for them to actually see it.”

Mary Chiles, of Springfield, Missouri, traveled up to the Iowa State Fair to watch Warren.

“It sounds like a cliche, but she knows how to get things done,” Chiles said. “She seems very pragmatic and experienced, and she keeps an eye on business.”

Chiles said her dad made her whole family Warren for President stickers after the 2016 election, long before Warren announced her intentions to run.

“It was sort of a way to help us deal with things,” she said.

Terri Pollard of Des Moines was impressed enough with Gabbard’s speech on the Des Moines Register Political Soapbox, she said she thought she might go home and donate a dollar to the presidential candidate.

“Today’s speech was a turning point for me,” Pollard said. “I really like that she’s invoking ‘we the people’ and reminding us that we are the ones with the power, and we can do what we want because we have the power to put them in office or take them back out.”

Pollard said she also likes Gabbard’s ideas on ending longtime wars the U.S. is involved in.

Dr. Donna Marino, of Aurora, Illinois, said she loves everything about Gillibrand.

“I’m from New York and I love that she’s from New York, and that she can blend both rural and urban,” Marino said. “She knows both sides of that.”

Marino said she’s a psychologist and a coach for women in leadership, so she likes Gillibrand’s feminist platform. 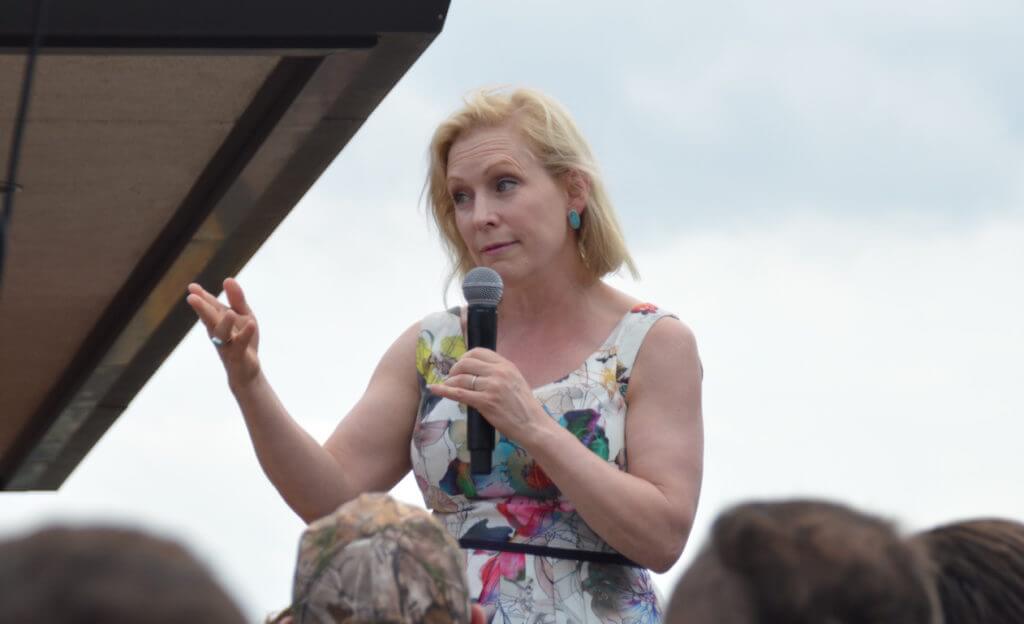 “I like what she stands for,” Marino said. “And I feel like when she’s talking, she’s talking directly to me.”

James Moran was decked out in Andrew Yang gear while listening to his favorite candidate speak.

“I’m impressed,” Moran said. “The energy he brings and the way the audience reacts is so cool to see in person.”

Before this, Moran had only seen Yang online. 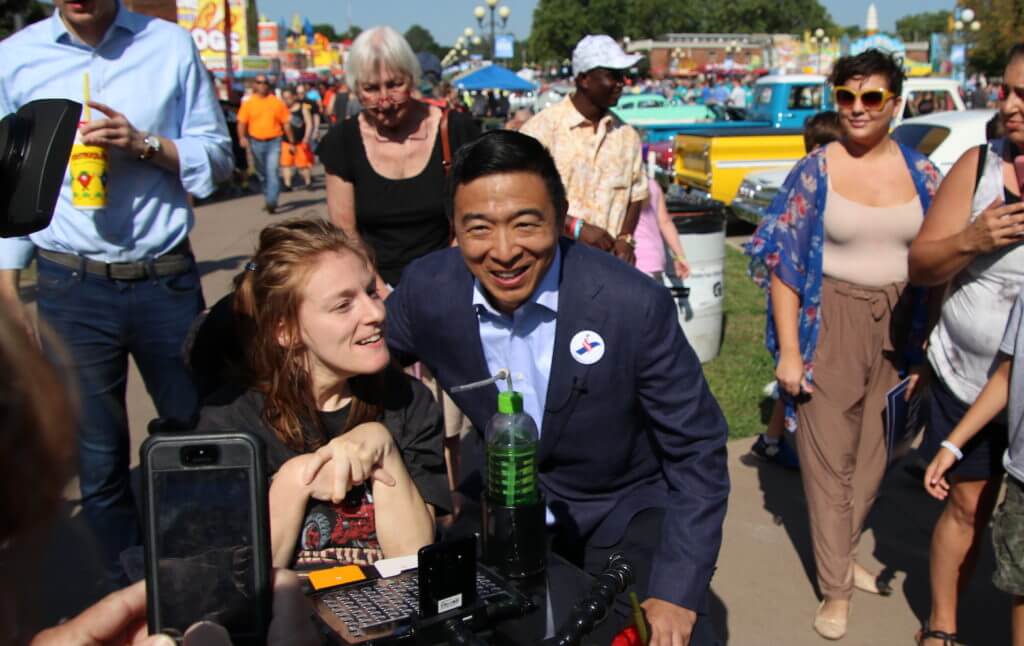 Mary Breiner, of Berkley, California, came all the way to Iowa to attend the Iowa State Fair.

She said she particularly enjoyed watching Yang speak, too.

“He was really great,” she said. “He was smart, engaging, articulate, and funny.”