Former Iowa Senator Tom Harkin, who wrote the Americans with Disabilities Act 29 years ago, joined presidential candidate Kirsten Gillibrand on stage to hear the stories of Iowans who are living with disabilities.

“I believe God puts us in places for a reason. He gives us ideas in our hearts that we just can’t let go,” Gillibrand said. “This is an idea that certainly Senator Harkin has had and has fought for, for over 30 years. It’s something that he has been convicted with. He has given that conviction to me.”

The two senators talked about what they’ve already done to enable people with disabilities, and then spent time listening to three disabilities advocates speak about the struggles they’ve faced. 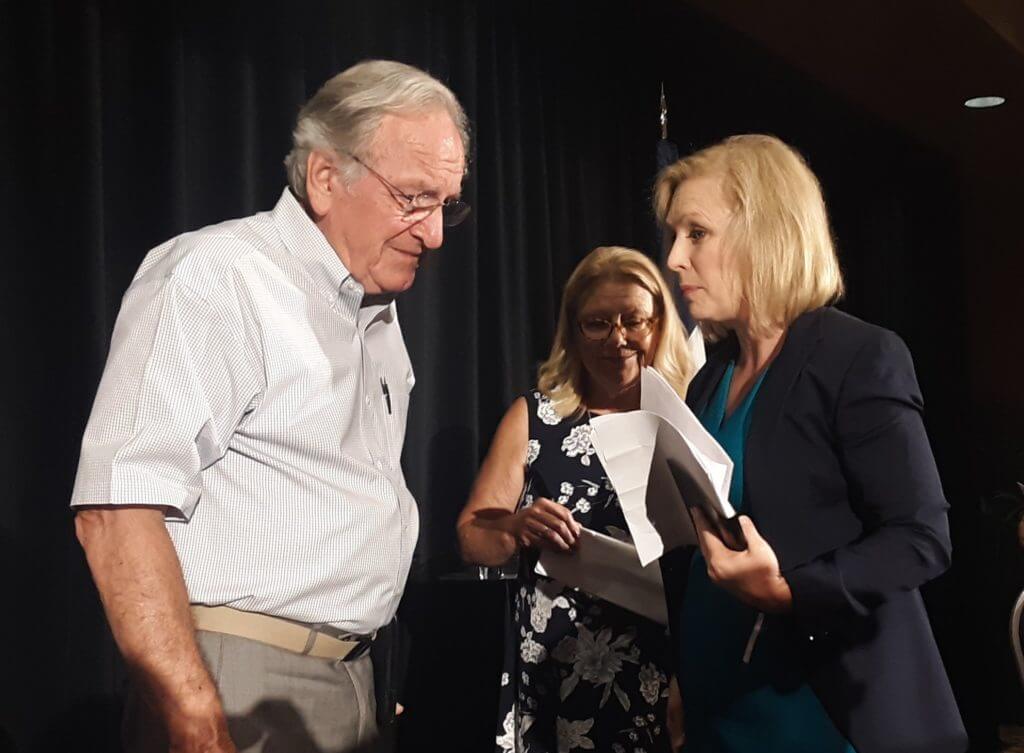 Bill Stumpf, and his 29-year-old son Kyle, shared stories about the problems they had when Kyle was in school. Bill said he always had to fight to get Kyle included in daily activities. Gillibrand brought the Stumpfs as her personal guests to the Detroit Democratic debate.

“The early years, although difficult, were more successful than junior high and high school years,” Stumpf said. “At that point, it seemed easier to focus on his finishing school and using home and community-based services to help get Kyle more independent.”

He said high school wasn’t necessarily bad for Kyle, but it was less inclusive than what he would have liked.

Carrie Chapman, of Altoona, told the group about the random challenges she’s encountered since she went blind in 2011.

She said she has a hard time getting rides via Uber and taxi services because they know she’s blind. She also said she can’t easily read the labels on her medication bottles and she talked about going through the Iowa School of the Blind to help her be able to better navigate the world.

Shelley Jespering, who is quadriplegic and from Ames, told the senators about how her life changed when she was paralyzed at the age of 28.

Jespering said she’s able to live at home with some help, but she has been unsuccessful at retaining a home health care provider through Medicaid. On Wednesday, she received her fourth 30-day notification since 2016 telling her that her provider would be cancelling services.

She can’t live at home without assistance, so Jespering is feeling pressured to move into a nursing facility even though she is still capable enough to hold down a job.

Gillibrand said she understands the problems with Medicaid in Iowa.

“Your Medicaid has been privatized and that has been crippling,” Gillibrand said. “I understand how bad that is for you. I will make sure as President that we don’t allow Medicaid to be privatized.”

Gillibrand listed numerous ways she plans to help people with disabilities thrive in the future.

She wants to raise the social security disability benefit to $1,500 so it reflects a living wage, and promised to fully fund job training opportunities for people with disabilities.

Gillibrand also said she will work to end discrimination.

Gillibrand later promised she would appoint a person with disabilities to her cabinet when she becomes president so someone “who can speak from their own experience about their own challenges,” will be at the table where decisions are made.

Harkin brought up a few more ideas and encouraged Gillibrand to continue to work on federal legislation that would enforce home builders to make houses handicap accessible.

“If you build a house from the beginning that’s fully accessible, it does not cost any more than not doing it,” Harkin said. It only costs more when you have to make the corrections later on.

He also said the government should be including children with disabilities in their plans as they map out the future of early childhood education.

Harkin praised Gillibrand for being the first candidate on either side of the aisle to host a disability rights forum, and Gillibrand thanked Harkin for his dedication to the cause.

“I can’t think of a public servant who is more honest, who has more integrity, and has more care for those who need his compassion, his care and his fight,” she said of the former Iowa Senator. “He is a champion.”