Honor, respect and unity were the themes of the 105th Annual Meskwaki Powwow held yesterday in Iowa.

Montana Governor Steve Bullock and author Marianne Williamson were there in the afternoon to share in the occasion. New Jersey Senator Cory Booker appeared in the evening.

Beto O’Rourke was scheduled to be there, too, but he spent the weekend in El Paso, his hometown, where people are recovering from last weekend’s mass shooting that killed 22.

The Meskwaki Settlement is Iowa’s lone tribal settlement, situated in Tama County in Central Iowa. There’s about 1,300 members of the Meskwaki tribe, around 800 of which live on the settlement.

Both Bullock and Williamson spoke before the group assembled at the powwow after witnessing the first grand entry of the day and a few dances.

They also walked the powwow grounds with members of the tribe, and learned more about the Meskwaki tribe at the Exhibit Tent. Bullock and Williamson said they were honored to be at the powwow, and they talked about their commitment to supporting Native interests if they’re elected in 2020.

Montana is home to several Native tribes, and Bullock has already taken action in the state to support tribal communities.

Among those, he mentioned CHAP (the Community Health Aide Program), Montana’s Native Language Preservation Program, tribal colleges and tribal apprenticeship programs. Many of the efforts focus on providing opportunities that allow people to stay in their communities.

“My time has really made me understand more of government to government relationships,” Bullock said. “When I meet with a tribal chairman, I’m meeting with the head of a sovereign nation, so you have to respect that sovereignty.” 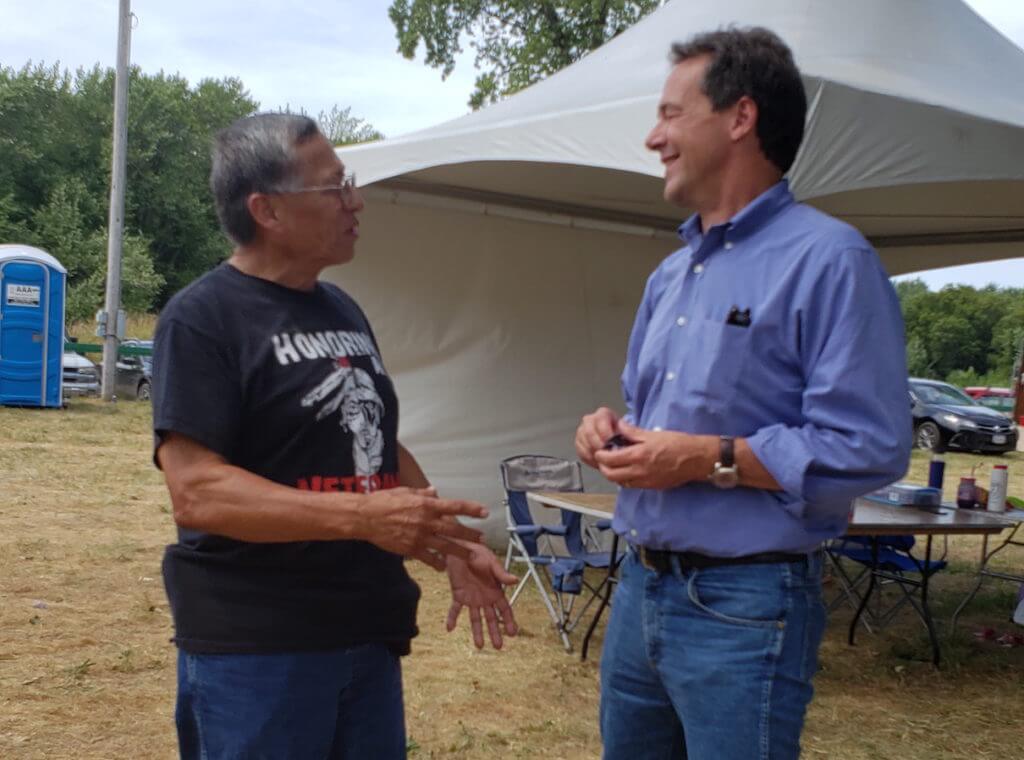 Bullock said more needs to be done to combat disparities across economic, cultural and health lines between tribal natives and the United States at-large.

Williamson also offered her solutions for improving the lives of Native people, and she has a section on her website that addresses Native issues.

Many of Williamson’s ideas connect to her consistent calls for spiritual healing, and that by correcting those problems, the country will improve. She connected issues with Native tribes to broken, unfair treaties negotiated in the past.

At the powwow, Williamson said she would begin to repair Native life by returning a “dominant portion” of the Black Hills in South Dakota to the tribes there. She said she would also oppose oil pipelines like the Keystone XL Pipeline, and she would address the ways in which corporations have abused land across the country. 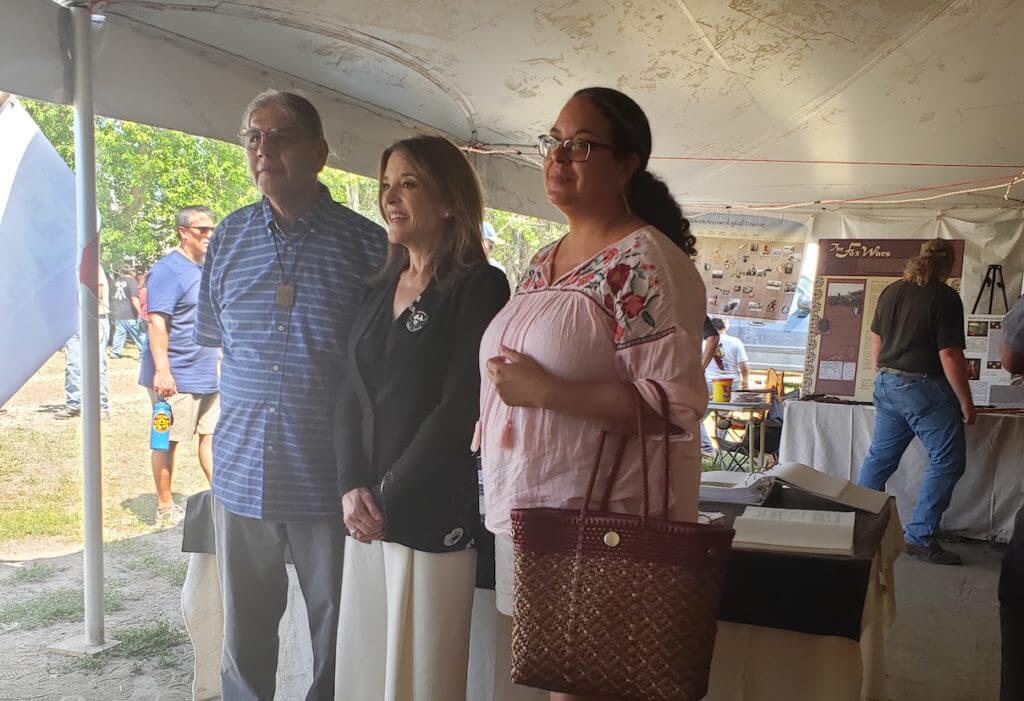 In regards to the major issue of missing and murdered Native women, Williamson said she thinks the problem is law enforcement.

As president, she said she would offer tribes two options. Tribes could choose to use their own law enforcement, which the federal government would provide support so it could operate at the same level as federal law enforcement. Williamson said tribes could also choose to allow state law enforcement to expand into Native territory.

“I have spoken about this at length regarding reparations to Black Americans,” Williamson said. “I feel it equally strongly of course to Native Americans. What I told this community today is that I do know their history, and as president I will, to the best of my ability, repair that which has been broken.”

Both Bullock and Williamson acknowledged they would need guidance to do the best by Native people in the country, and they’ll rely on Native voices to provide it.

Bullock said he already does. Montana has an Office of Indian Affairs, and he would bring in people he trusts from tribal nations to help build policies.

Williamson said she doesn’t have the background information on Native issues that she does on reparations for Black Americans, and she’s happy to learn more.

Williamson lived in New Mexico for a while, and she said the culture there is threaded with influences from Native tradition. The Meskwaki Powwow wasn’t the first powwow she’s attended, and she said she finds them profound.

“I have great respect for what’s happening here. It’s deeper than it even appears, it’s beautiful to look at but it’s also profound in terms of the passing of the baton from one generation to another,” she said.

Bullock frequently attends powwows, and he flew back to Montana on Saturday in order to be there for tribal events happening in the state.

Booker dropped by in the evening. Starting Line had left by then, but via a NJTV video, Booker wove his main campaign message into honoring the event.

“I just want to give my respect and my love to this incredible community,” Booker said. “I look forward to seeing a nation where we honor all of our people. We understand that patriotism is love of country, and you cannot love your country unless you love all the people of this great nation.”

Lots of writing and video editing ahead of me, but to hold you over here’s a video of @CoryBooker bouncing an adorable child at a pow wow. You’re welcome @rosariodawson pic.twitter.com/5K1AhnPZ9w 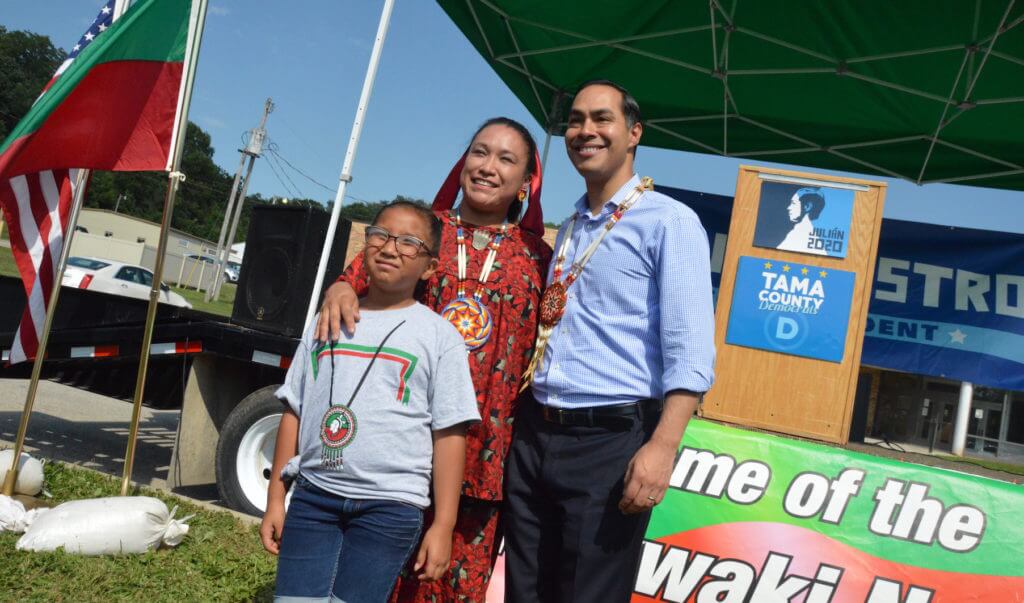 Later in August, Sioux City will host the Frank LaMere Native American Presidential Forum at the Orpheum Theatre on Aug. 19 and 20. All of the candidates were invited and Bullock and Williamson have confirmed that they’ll attend. Elizabeth Warren, Amy Klobuchar, Bernie Sanders, Julian Castro and John Delaney have also confirmed.

The forum is named in honor of Frank LaMere, a Native American rights advocate from South Sioux City, Nebraska who died of cancer last month.