Despite recent efforts to limit it, abortion is still legal in Iowa up to 20 weeks. However, the procedure isn’t easily accessible to all Iowans.

Iowa has eight Planned Parenthood clinics, five of which provide abortion services. There are also a few other clinics that provide the service.

But these providers are concentrated mostly in the central and east-central parts of the state with locations in Des Moines, Urbandale, Ames, Iowa City, Cedar Falls, Cedar Rapids and Council Bluffs.

This means people in the northern, western and southern parts of the state have to travel, sometimes hours, to access abortion services.

For example, someone living in Sioux City, a city that used to have a Planned Parenthood as recently as 2017, would have to travel an hour and a half to Council Bluffs, three hours to Ames or an hour and 20 minutes to Sioux Falls to get an abortion. 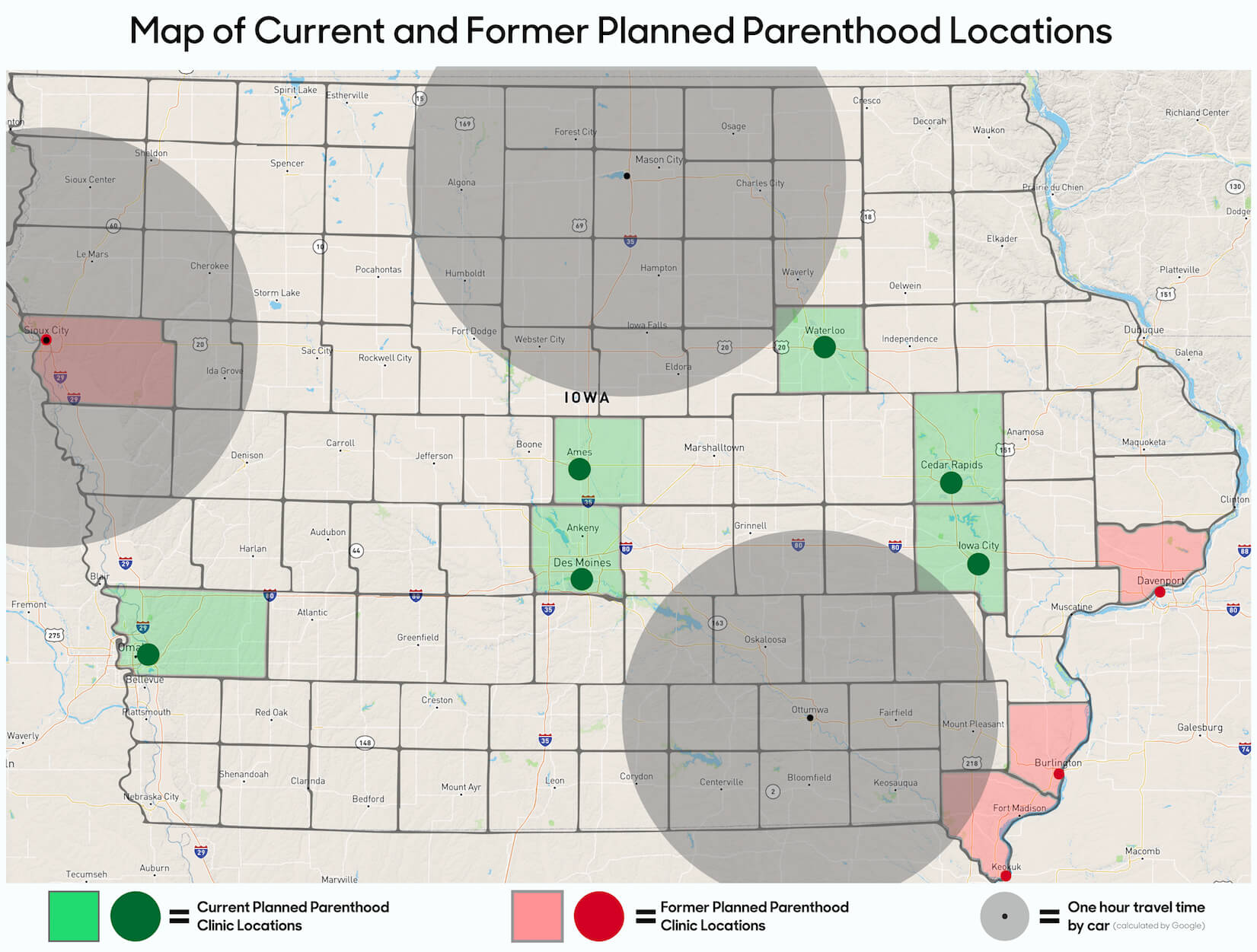 It didn’t have to be this way.

Planned Parenthood wasn’t included in the new state program. Because of the shift, four Planned Parenthoods around the state closed their doors in Sioux City, Burlington, Keokuk and Bettendorf.

Of those four, Keokuk was the only facility that didn’t offer abortions. The others provided Telemedicine procedures, which involve the same process as an in-person procedure, and expanded access by not requiring travel.

“Even if abortion is technically legal, if it is not accessible then legality is essentially a moot point,” Erin Davison-Rippey, the executive director of Planned Parenthood for the state of Iowa, told Starting Line.

Davison-Rippey has been at Planned Parenthood for about seven years, including when the four clinics had to close their doors.

She said the biggest problem with people having to travel for abortions is that patients miss out on the perk of having all their health care needs handled in one place.

“One of the benefits of being able to go to a provider who is able to provide the full range of comprehensive reproductive health care, including abortion, is that a patient has access to their full spectrum of options,” Davison-Rippey said.

Financial access is also an important element, and Davison-Rippey said that the privatization of Medicaid has had a negative impact.

“We saw, across the state, some of the other small family planning providers close their doors over the past several years because, quite frankly, they just couldn’t function within a system where Medicaid was not paying them,” Davison-Rippey said.

Jodi Tomlonovic, the executive director of the Family Planning Council of Iowa, said patients’ finances are also affected by lack of access.

She pointed out that travel across the state adds to the amount of money people are already paying for health care. And if people can’t access health care, they don’t get the service they need.

“It’s just like losing a physician’s office or any other kind of health care provider’s office in the community,” Tomlonovic said. “It lessens the quality of healthcare in that area.”

Iowa isn’t the only state facing this problem, of course.

In St. Louis, Missouri, the single abortion provider in the state is fighting to stay open and the Missouri Department of Health and Human Services is making a decision today about the license for the St. Louis Planned Parenthood.

As a result, Missourians who can, have traveled across the border into Illinois to pursue abortions at the Hope Clinic for Women in Granite City.

But sometimes travel simply isn’t an option, and the more obstacles in place between people and essential health care, the more people go without it entirely.

“There are many barriers to access,” Davison Rippey said. “When lawmakers attack access, they are harming the folks who live in our state.”