It’s the most important weekend of the Iowa Caucus yet, with 19 candidates descending upon Cedar Rapids to speak at a major fundraiser that nearly every key Iowa Democratic activist is at.

The Hall of Fame Celebration is officially about honoring party activists and elected officials, but it’s really the kick-off of a new phase of campaigning for the Iowa Caucus.

Campaigns show up in force to show off to both activists and the national press gathered here.

Starting Line has full team coverage of all the day’s events. Here’s what the candidates and their staff did this morning and early afternoon.

Any multi-candidate Democratic event during the Iowa Caucus would not be complete without a massive sign war demonstration between the competing campaigns. These high-profile events are often used as a chance for caucus campaigns to flex their organizational muscle, showing off to the state’s top activists and the national press how well their ground game is here.

Some of it is silly showmanship, but it can still tell us something important about the campaigns’ organizing strength. If you can get hundreds of motivated, excited volunteers from all over the state to show up and cheer on your candidate, it probably means you’ve got lots of motivated, excited volunteers who can serve as precinct captains and canvassers. The sign wars are also just a fun tradition among long-time Iowa political operatives. Certain top staffers on Warren and Booker’s Iowa campaigns are quite notorious for their enthusiastic love of over-the-top visibility rallies and creative chants. Both Warren and Booker had some of the loudest groups on hand. 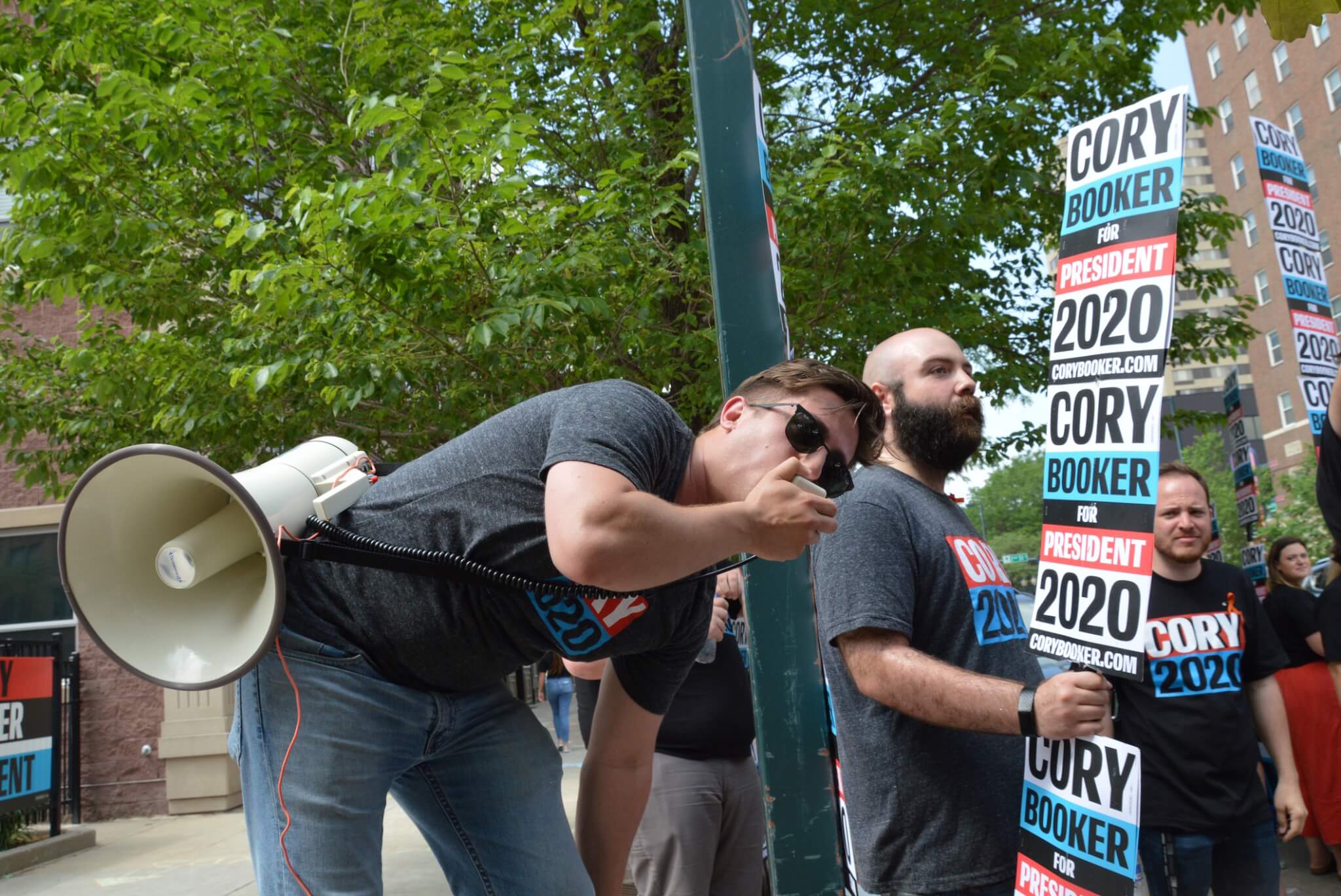 The sign-waving festivities kicked off before the sun came up – Kamala Harris’ team arrived at 5:00 AM to start their chants (to an empty street). They staked out the street space closest to the event entrance and fielded a large group of staff and volunteers, standing out in their bright yellow t-shirts. 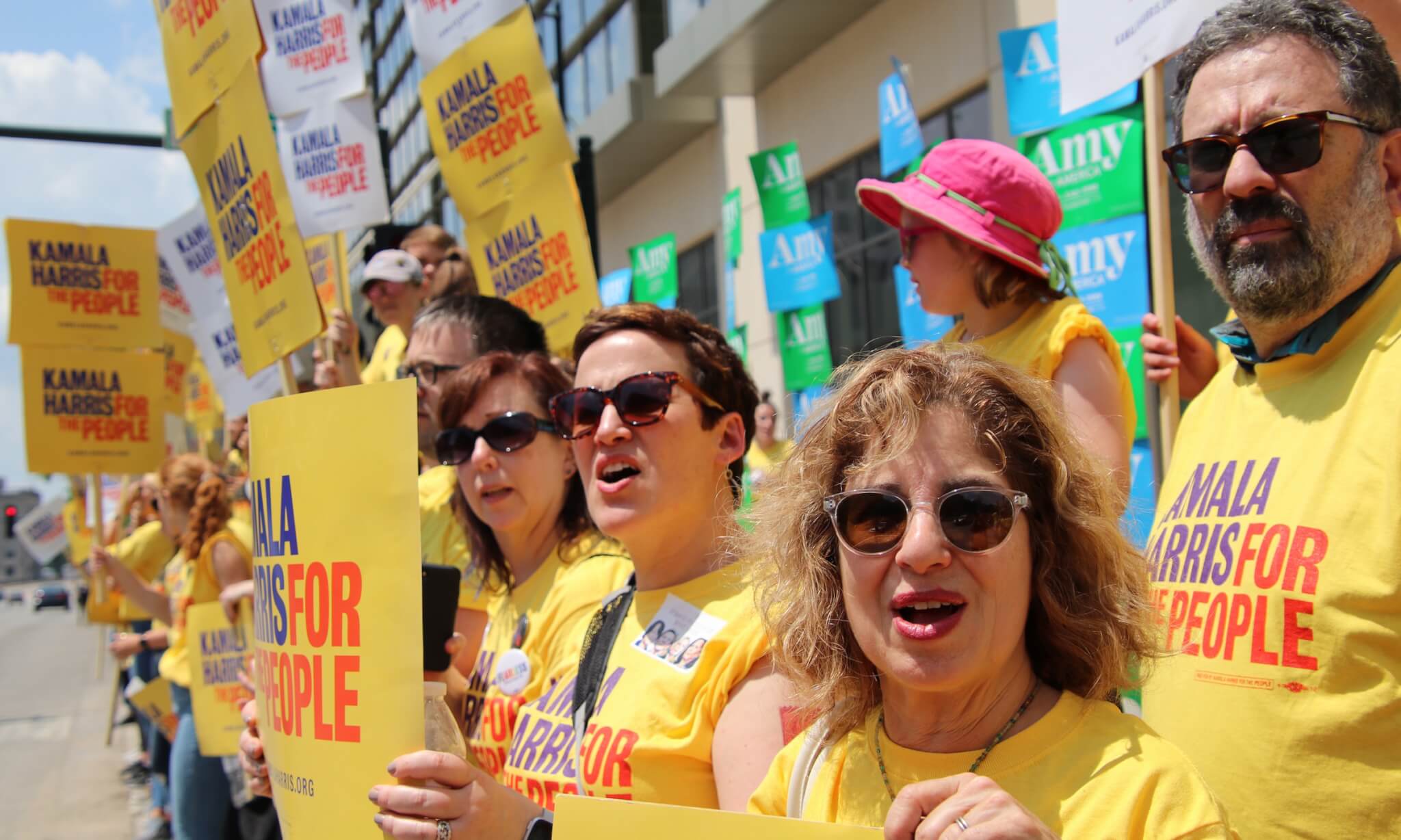 Harris also had a few younger fans on hand. 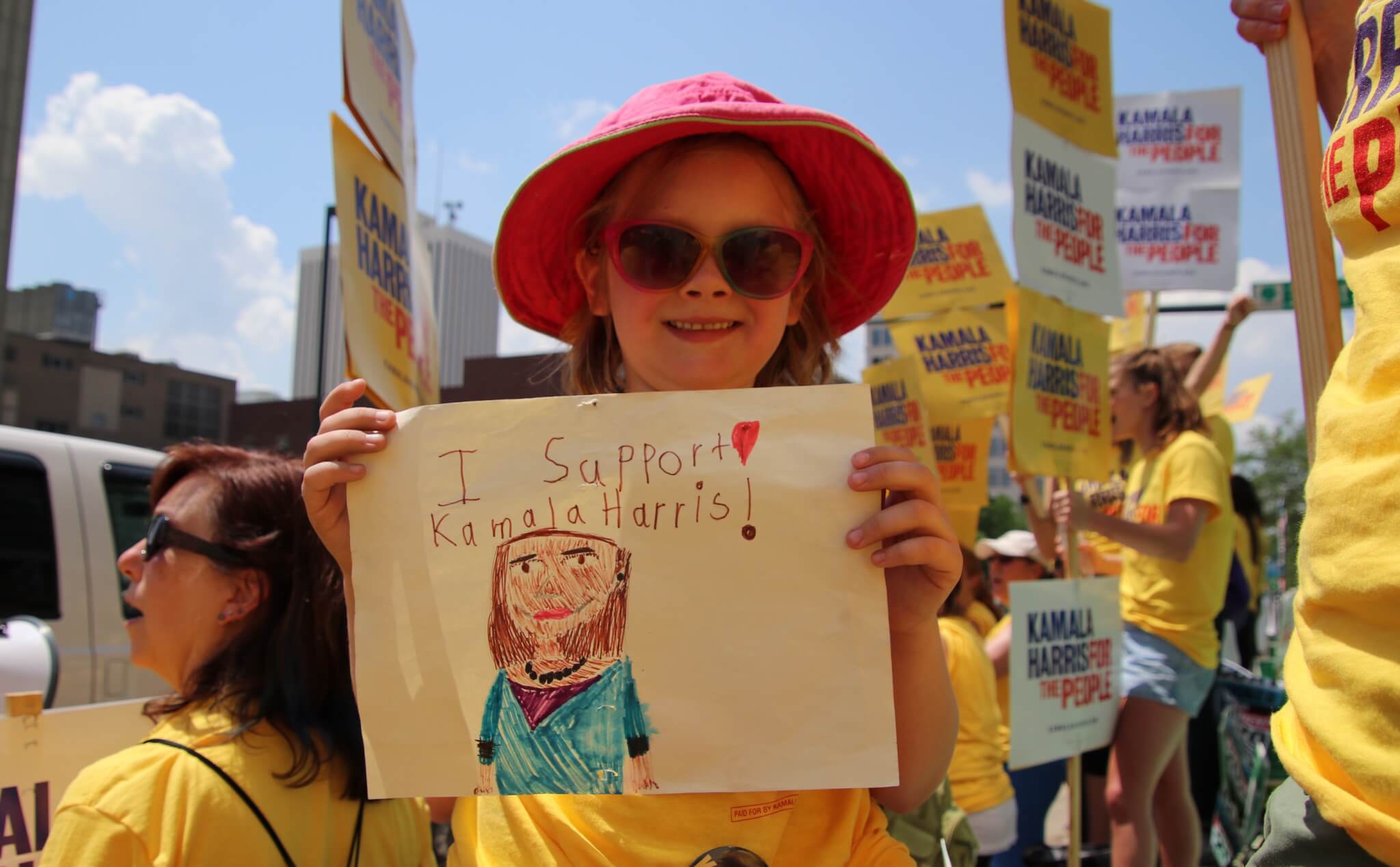 John Delaney’s team brought out all the bells and whistles for their street crew. Professional sign-spinners were a nice touch for a sign war, and they unleashed a blimp with Delaney’s name on it before heading into the event. 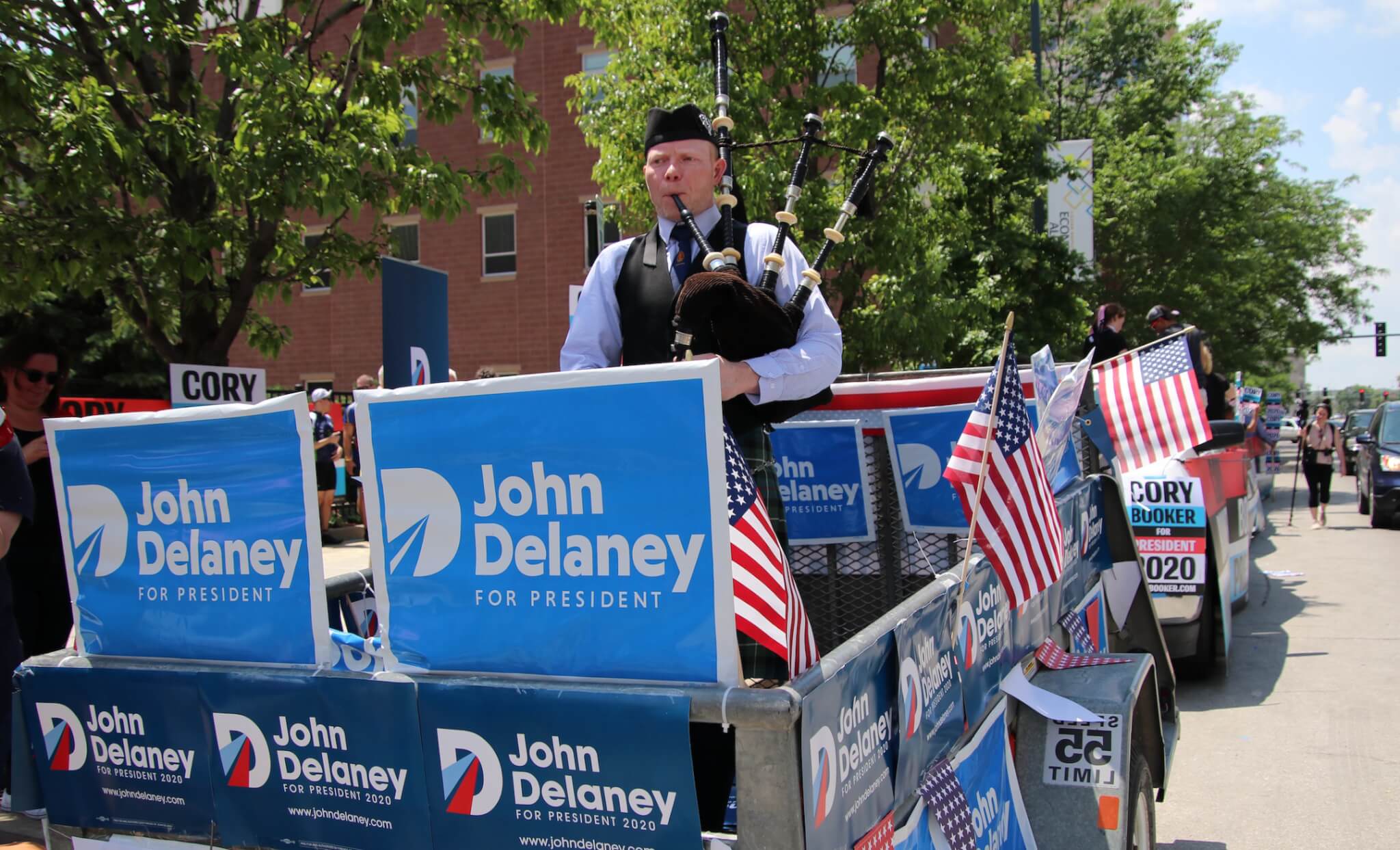 Delaney himself tried his hand at spinning a sign, but he learned it was a job Maximal Bonus.com perhaps best left to the professionals. Amy Klobuchar’s green-clad contingent blasted music before the event, holding a dance party of sorts on the beds of their pickup trucks. 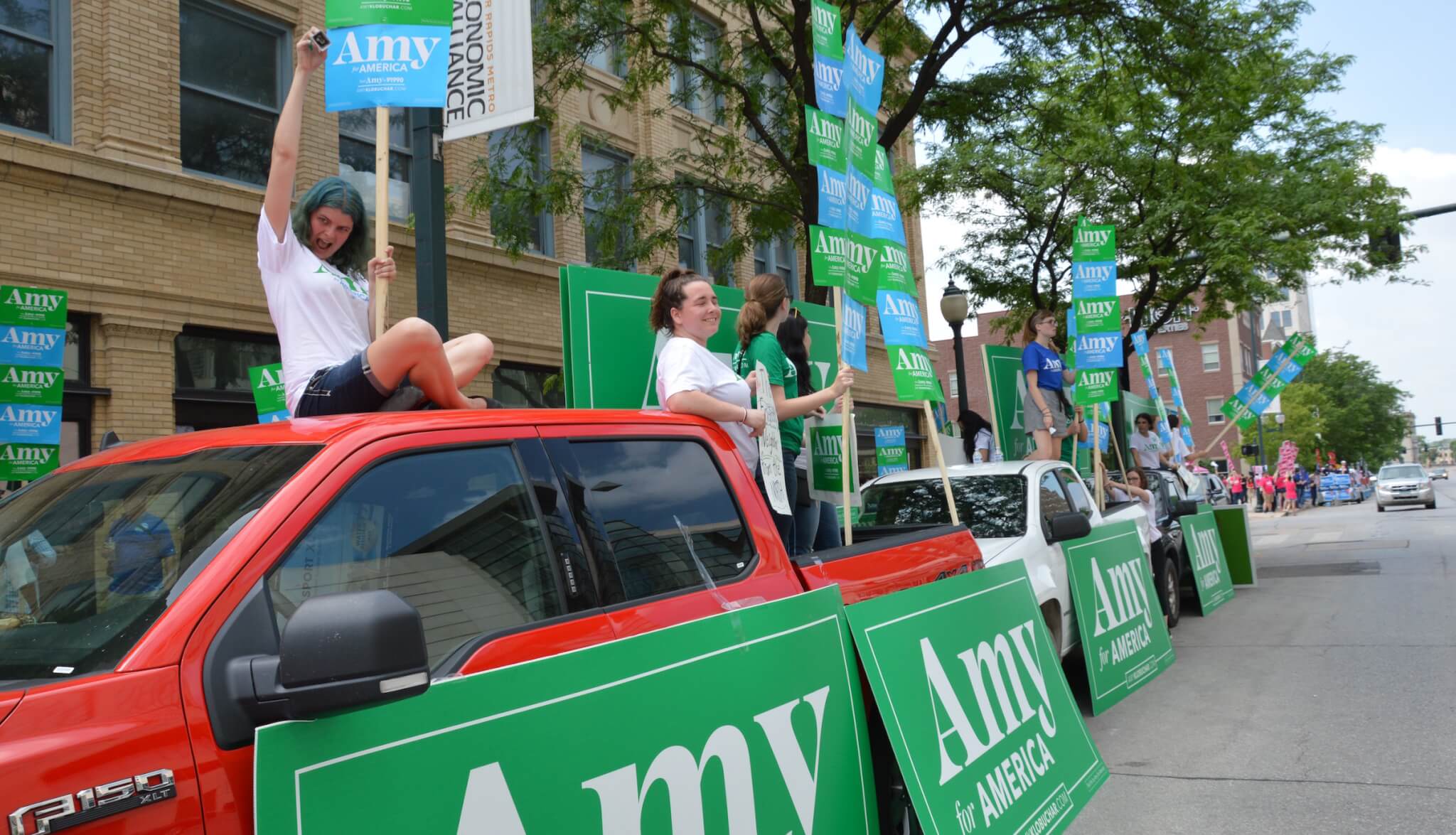 Beto O’Rourke had a smaller crew on hand, but that was in part because their staff was busy organizing local events all across the state today. They did, though, have a taco truck on hand, and handed out coupons for free tacos to passer-bys and staffers of all campaigns. 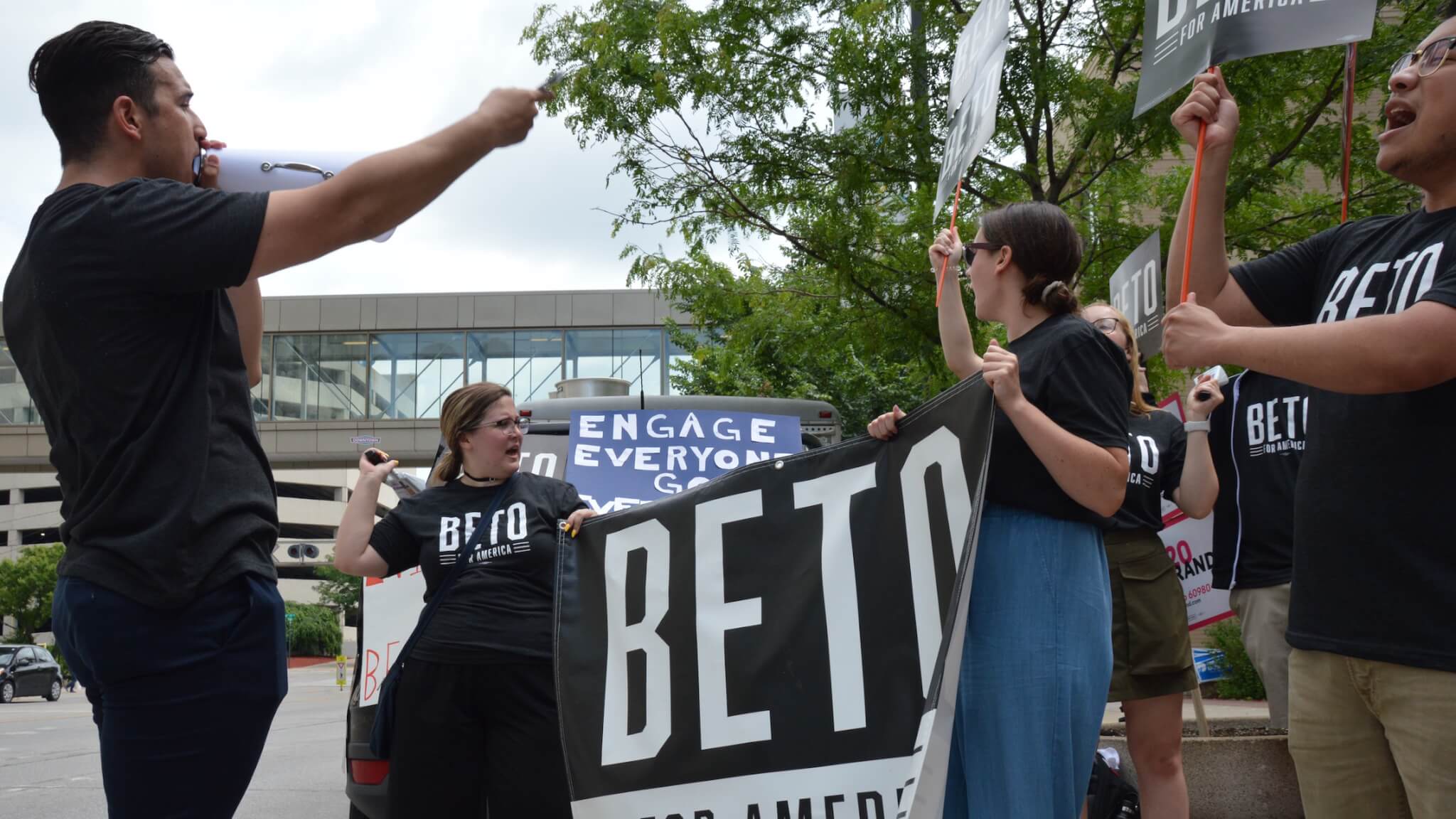 Some supporters brought their own handmade signs to the rallies. 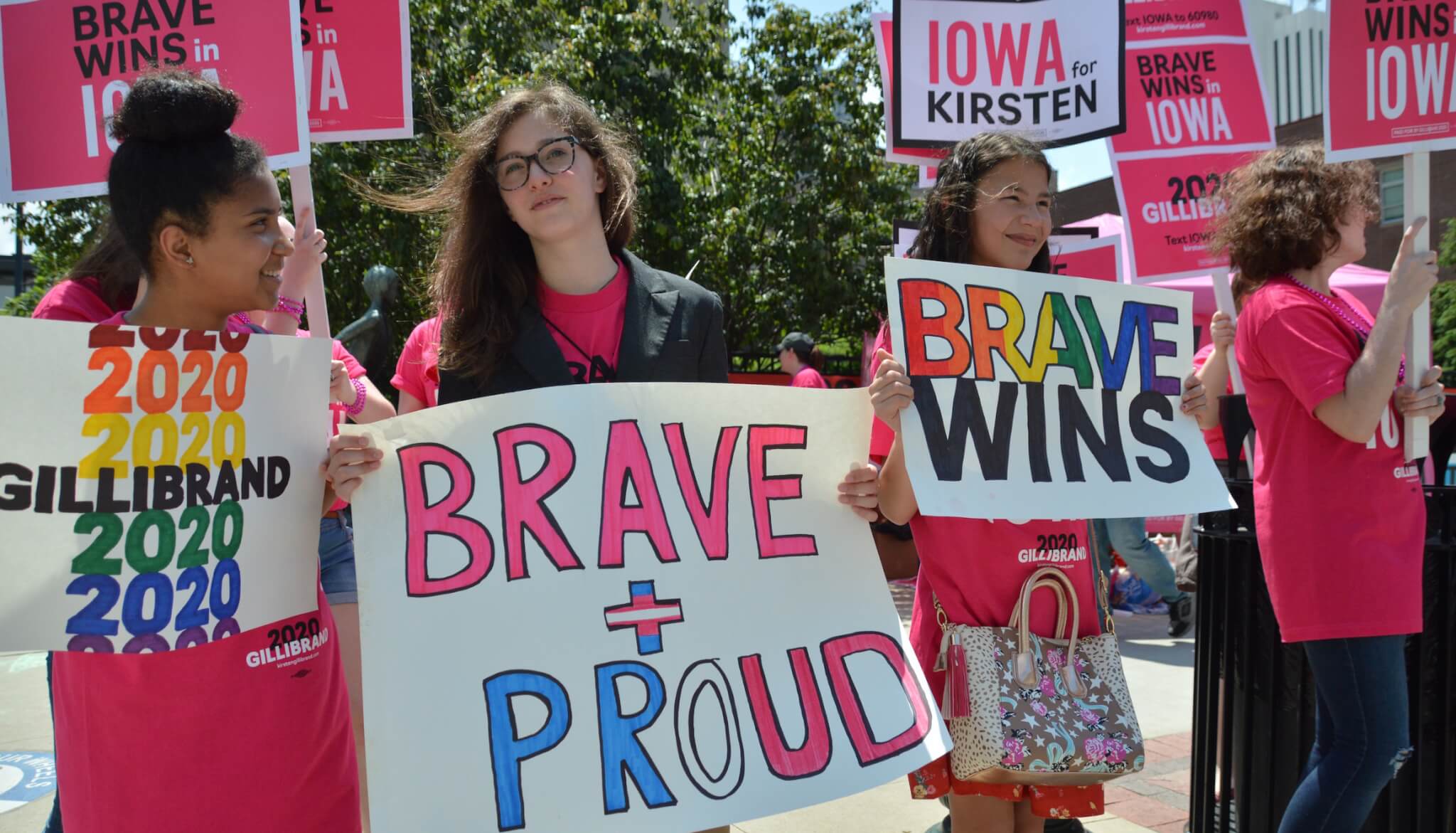 Many of the candidates stopped by to rally their troops before heading into the venue, giving brief pump-up speeches and joining in with the chants. Not all campaigns participate in the game, though. Sanders’ 2016 team avoided it at early major Iowa events. But the senator still made quite the entrance, leading a march of hundreds of activists and striking McDonald’s workers who were advocating for a $15/hour minimum wage and a union. 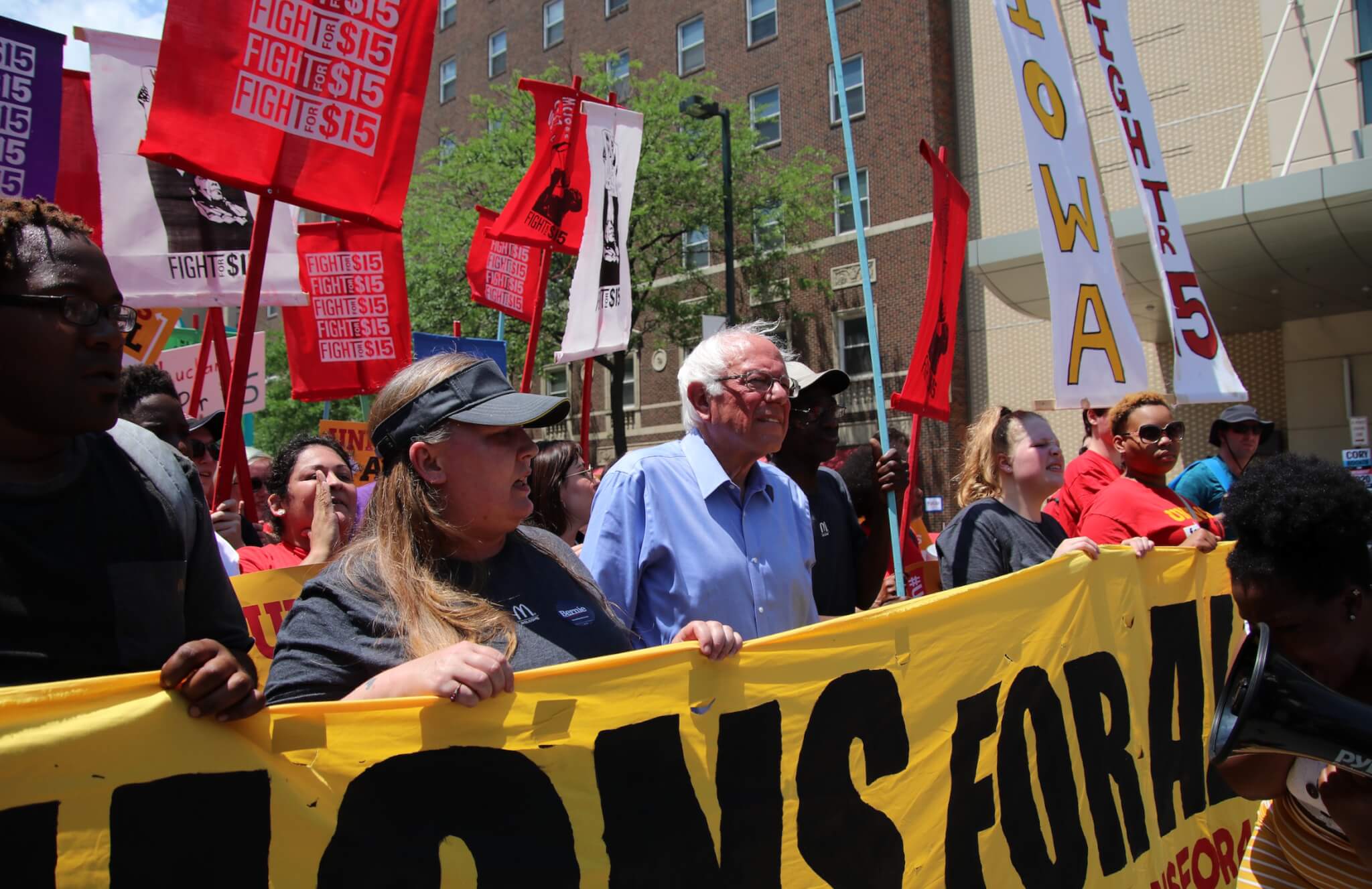 While other presidential campaigns were battling for attention outside the site of today’s Hall of Fame gala, fans of South Bend, Indiana, mayor Pette Buttigieg gathered at Green Square Park in downtown Cedar Rapids for a picnic packed with food, games and, of course, campaign signs.

He arrived to the park to hundreds gathered around the outdoor stage. During his brief remarks, Buttigieg called “climate disruption” the “national security crisis of our time” and applauded Iowa for being among the first states to legalize gay marriage in 2009.

From the stage, the mayor tossed bags in a game of cornhole, played the piano on stage and met supporters. 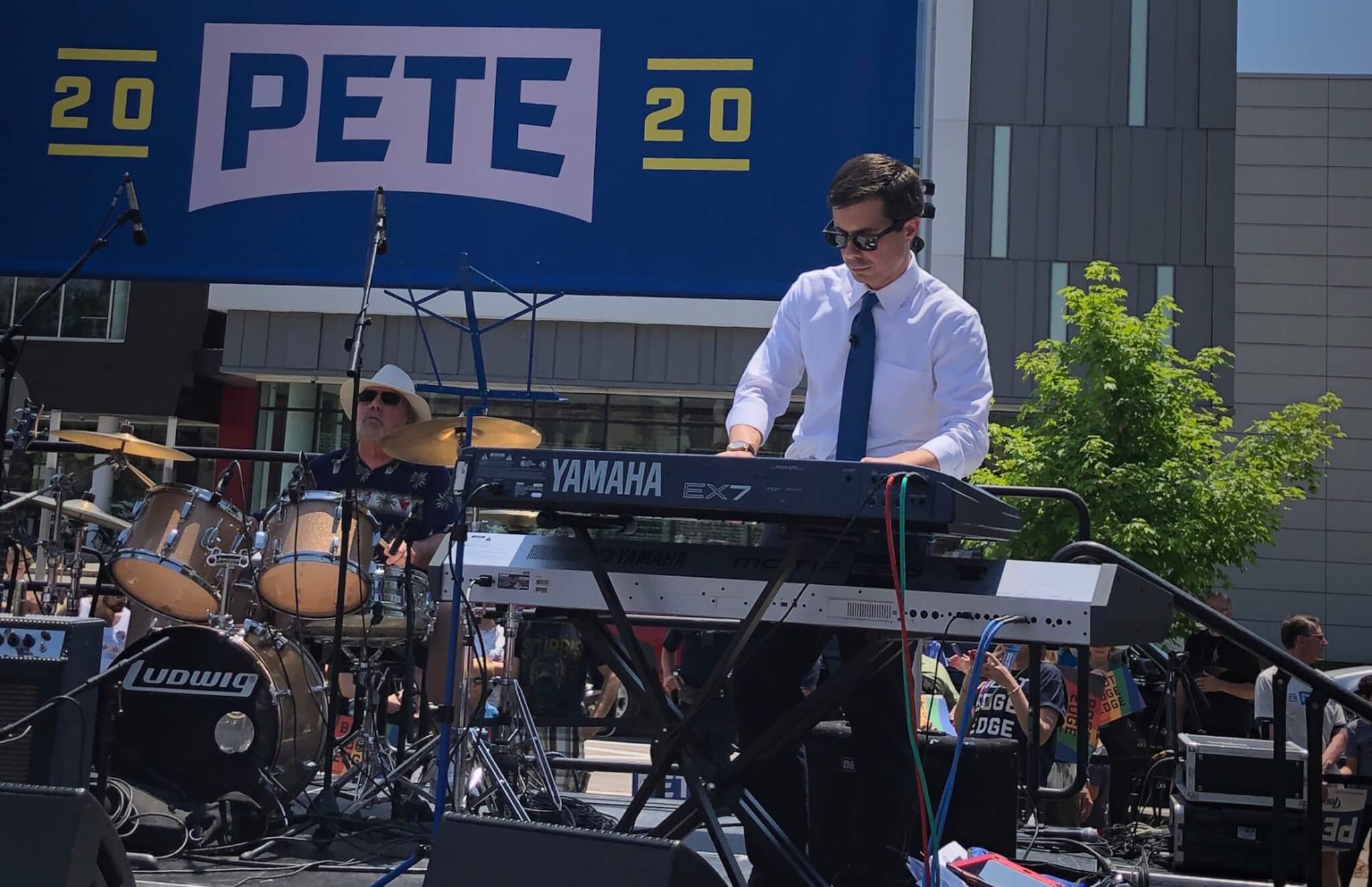 For the candidates who didn’t have events planned ahead of the Hall of Fame gala in Cedar Rapids, the morning contained different activities.

For example, Sen. Kirsten Gillibrand got in a morning workout in Marion, Iowa before she arrived and greeted her group of supporters.

It's Hall of Fame Day here in Iowa! No better way to prep than with a workout at Tire Trained Studio in Marion. pic.twitter.com/p7argFnCzL

Deeply grateful for the opportunity to join Pastor Whitfield and the congregation of Mt. Carmel Baptist Church this morning. A beautiful service and a reminder of the power and joy that we can bring forth when we come together to meet the challenges we face. pic.twitter.com/WgaXlyHc3v

The event drew a large crowd. Hickenlooper got a negative reaction at the Democratic Convention in California last weekend for denouncing socialism, but stuck to the position today at Quarter Barrel.

“Most Democrats aren’t for socialism,” Hickenlooper said in response to an attendee’s question. “Democratic candidates have to be able to draw a clear line and separate themselves from that word, otherwise it’s going to be tough [to defeat Trump].”

Hickenlooper also hopped behind the bar to serve a few beers to some guests, and one for himself. 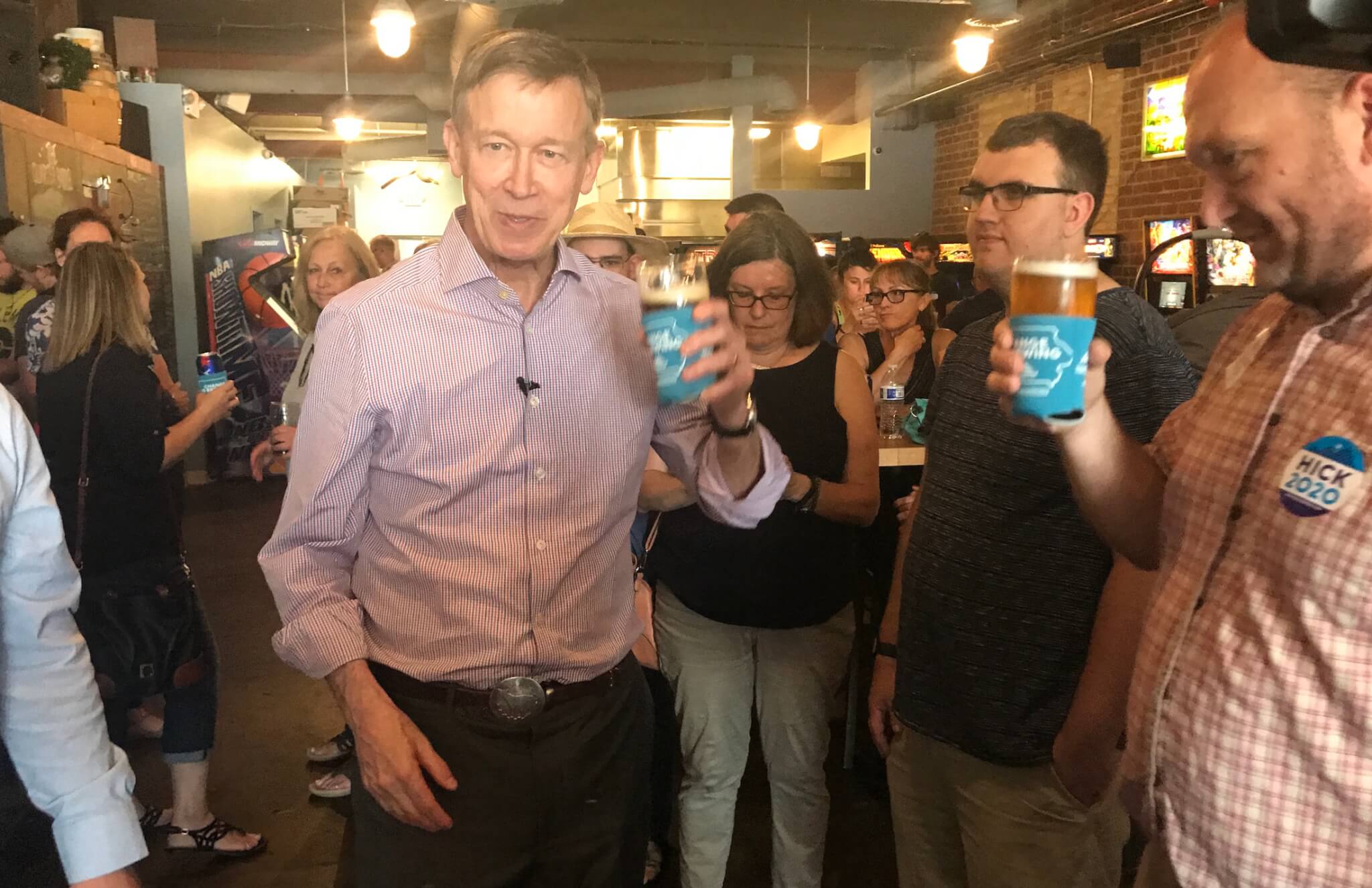 “I think what I’ve been able to do is bring people together and do the big progressive things people said couldn’t be done,” Hickenlooper told the crowd. “We have to not only defeat Donald Trump, but bring this country together and address these real challenges like climate change, like universal coverage, like the inflation in healthcare coverage.”

Yesterday, CNN and the Des Moines Register released a fresh round of Iowa Caucus polling data, which shows Hickenlooper polling at less than one percent. He was asked about his polling status after speaking.