It’s Pride Fest Weekend in Des Moines, and the 2020 presidential candidates are out in force to meet local Iowans and show their support for the LGBTQ community. A candidate forum is set for later today, and Iowa Safe Schools is holding a tailgate for visitors to meet local LGBTQ youth. Close to a dozen White House hopefuls are expected to be in the area.

Starting Line has full team coverage for all of the day’s events. Here’s everything we’ve seen so far:

Back In The Saddle: Kirsten Gillibrand Serves Up Drinks, Policy At Gay Bar

“Who wants a drink?” Senator Kirsten Gillibrand asked as she walked into The Blazing Saddle. She was at the well-known gay bar in Des Moines’ East Village on Friday night to celebrate the kick-off to Pride weekend. It was her second time there this year; the previous drop-in drew national headlines thanks to photos of her applying makeup with a drag queen.

Wearing a “Love Is Brave” t-shirt, she entered the Saddle to cheers, then set up behind the bar to take drink orders. 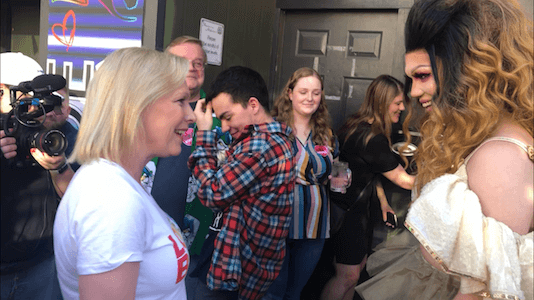 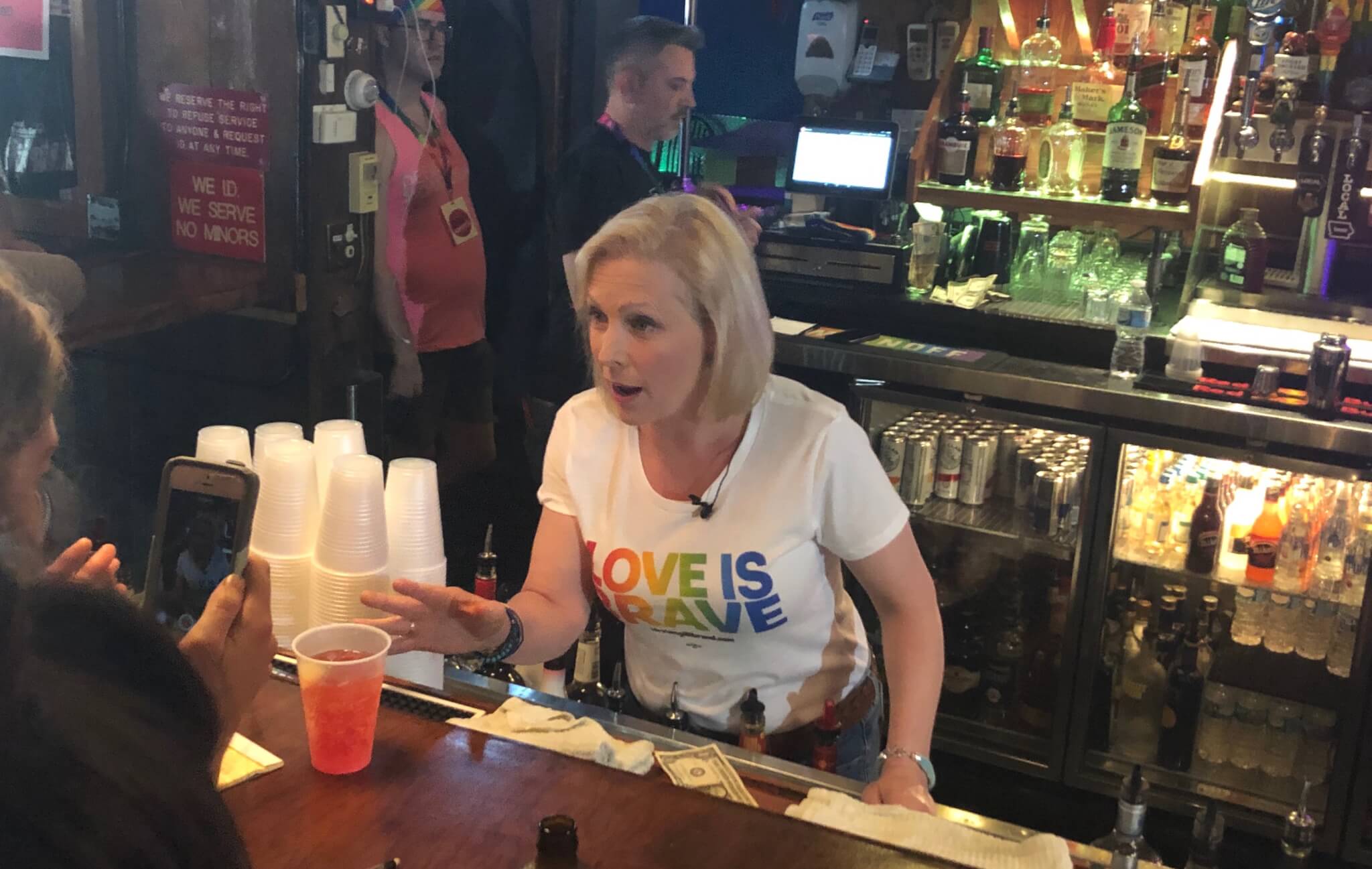 Gillibrand talked with bar patrons about her new, extensive LGBTQ policy proposal that she rolled out this week. 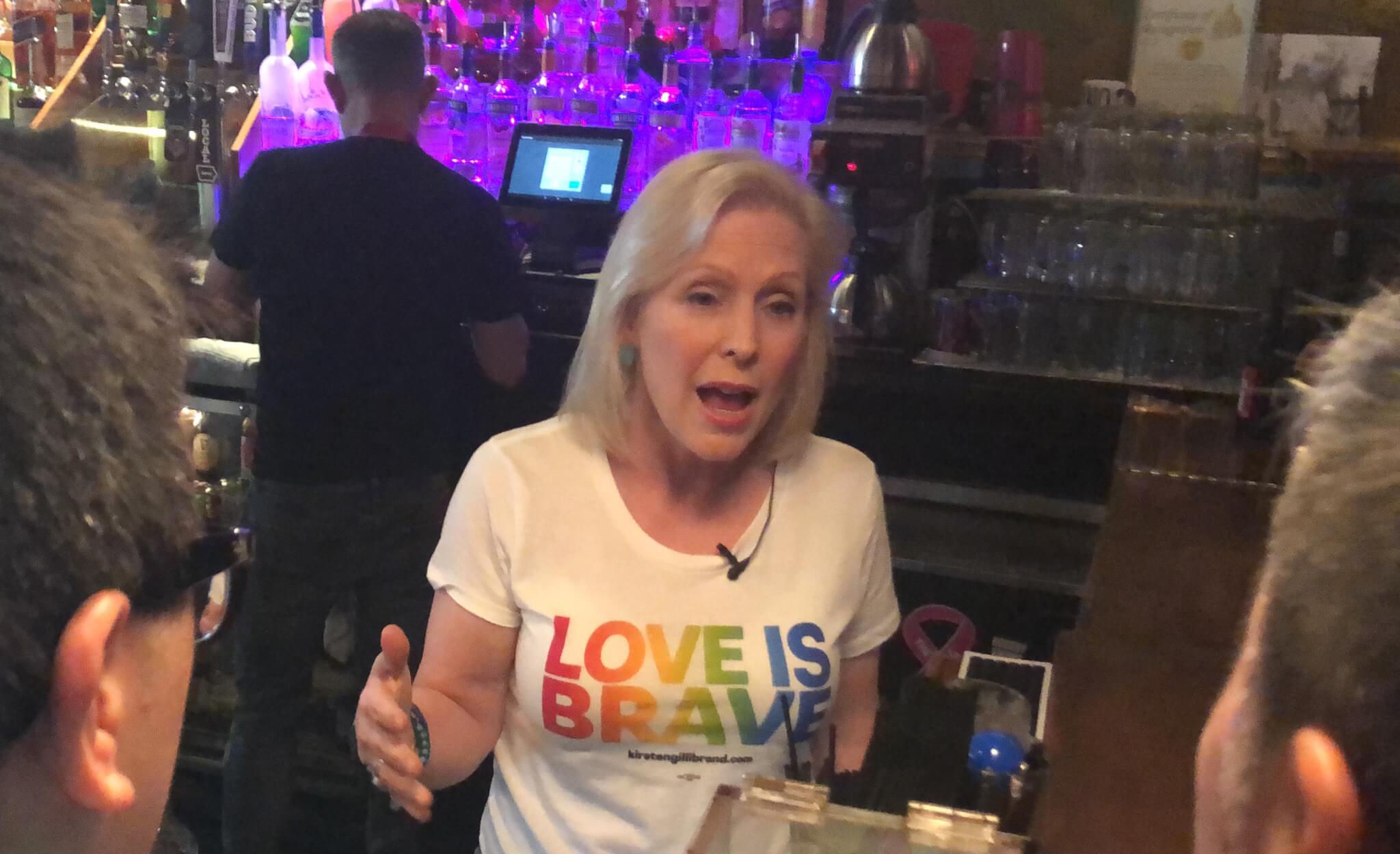 Outside the Saddle, Gillibrand mingled with Pride Fest attendees, occasionally answering questions about her policy proposals. Many young Iowans stopped with surprise when she passed by, recognizing her from the news.

The senator also took part in a little dancing with the silent disco:

Congresswoman Cindy Axne joined in the Pride Month fun on Thursday afternoon. She joined local students gathered at Iowa Safe Schools’ office to create “drag taters” by drawing a face on a potato and then dressing it up. The Safe Schools organization advocates for LGBTQ youth in Iowa – they recently named Axne “Ally of the Year.”

Chasten Buttigieg, Pete Buttigieg’s husband, also had fun at Iowa Safe Schools on Friday afternoon. They had briefly run out of potatoes, though, so he created this “drag apple” instead.

Kirsten Gillibrand came by as well to decorate her own tater:

Beto O’Rourke ran the 5K Fun Run at Capital City Pride Fest Saturday morning in about 27 minutes and 10 seconds. He ran with his wife, Amy, and Iowa politician J.D. Scholten.

After the race, O’Rourke stopped for some pictures and hugged Molly Tullis of Ankeny after she crossed the finish line. Tullis was excited because it was the first time she had finished a 5k in under 30 minutes.

Tullis said she didn’t know O’Rourke and Scholten were running when she signed up, but was excited to hear they did before the day of the race. Her mother lives in Scholten’s district, and said she was a fan.

“I love you both,” Tullis told O’Rourke and Scholten after she got a picture with them.

Chasten Buttigieg stopped at Raygun Friday afternoon, where he then addressed a group of 30 to 40 people in the Mars Cafe coffee shop, answering questions from two moderators. The questions touched on a variety of topics, but a broad theme was how his life has been changed by becoming more politically engaged – first by marrying a mayor and then by campaigning across the country.

He said the campaign has made him appreciate politics more, and his position as a symbol of hope for other LGBTQ people. He said it’s also strengthened his marriage, which is coming up on its one-year anniversary.

Buttigieg also met a fan wearing a “Chasten for first gentleman t-shirt,” and gladly took a photo with the man.

He even helped Kirsten Gillibrand buy some new clothes so she was prepared for Pride Fest before he left the East Village shop.

Former Colorado Governor John Hickenlooper bought some Maytag blue cheese while wandering around the Des Moines Farmers Market with Polk County Supervisor Angela Connolly Saturday morning. He did not, however, eat the cheese.

Hickenlooper and Connolly spent most of their walk talking about the need to reform the country’s mental health care system.

Before the two parted, Connolly told Hickenlooper she liked his ideas, saying, “What I like about you is you’ve already implemented so many things, so I know you can do that for the country.”

Hickenlooper then took a quick tour of the World Food Prize Building before heading over to the Iowa Safe Schools Tailgate.

In downtown Des Moines, John Delaney visited the Des Moines’ Farmer’s Market. He only made it a few feet down Fourth Street before he spotted the Hangry Hippos stand, where he bought a few “Raise Hell, Not Walls.” shirts.

Delaney spent his time at the Farmer’s Market walking around Court Avenue and talking to Iowans, both on the street and behind booths. He grabbed breakfast of chocolate chip cookies for himself and his team at the Vander Ploeg Bakery stand.

“Lifting up the next generation of LGBTQ leaders is a tribute to [Matthew Shepard’s] life and legacy,” Buttigieg said in a Tweet.

Matthew Shepard's death forced America to confront deadly homophobia. Lifting up the next generation of LGBTQ leaders is a tribute to his life and legacy. It was an honor to participate in last night's presentation of Iowa's Matthew Shepard Scholarships. pic.twitter.com/SUCp2iLbmj

Iowa Safe Schools held a tailgate during Pride Fest, inviting candidates to come by and visit with young Iowans.

Hickenlooper was the first candidate to stop by the Safe Schools Tailgate to play some games and chat. He spoke with organizers and teens before joining the action for a cornhole game and taking a turn at giant Jenga – which he did without knocking over the stack.

Williamson stopped by the tailgate for a bit with a couple of staffers. She made the rounds to talk to organizers and check out the merch before she spent a few minutes talking to a group of students about her background and campaign.

Delaney appeared shortly afterward. Some of his staffers grabbed walking tacos as he chatted with Iowa Senate candidate Theresa Greenfield. Delaney and his team hung out for about 15 minutes, chatting with organizers and some of the kids before he spoke to Greenfield and headed to his next stop.

Pete Buttigieg addressed several hundred people who were celebrating the tenth year of marriage equality in Iowa. He met the Varnums of the historic Varnum decision, which legalized gay marriage in the state in 2009.

“On a day like today, aren’t you full of a certain measure of hope?” Buttigieg asked the crowd.

2 Comments on "Early Scenes From Candidates At Pride Fest"