Senator Amy Klobuchar has so far seen a lower national profile in the 2020 race than some Midwestern Democrats may have hoped. But Iowa is her home field advantage.

As more than a few candidates for president have already said – mostly in defense of their own lackluster standings in polls – that this race is a marathon, not a sprint. For Klobuchar, this could actually be the case.

She’s Iowa’s neighbor, and is well prepared to tackle heartland issues on the campaign trail after 12 years in the U.S. Senate representing Minnesota.

Recently, Klobuchar released a proposal to spend more on mental health and addiction. Her campaign has also emphasized a trillion-dollar infrastructure plan – she cites her success in getting funding to get the I-35W bridge rebuilt after its collapse – and the plan to better assist farm operations and the families that own them.

Each of these are issues apply, of course, in other regions or nationally – but should resonate particularly well with voters here who have felt they’ve been overlooked by the government.

Folks from home like her, too. She’s been voted into office by strong margins: 2018 made it three six-year terms by Minnesotans. In her first bid for the Senate, she earned at least 40 percent of the vote in all but eight of the state’s 87 counties. In 2012, Klobuchar won by nearly one million votes.

Her candidacy for president has also received endorsements from several of the state’s prominent female politicians. Speaker of the Minnesota House of Representatives Melissa Hortman, Congresswoman Angie Craig, and fellow Senator Tina Smith have all endorsed Klobuchar.

Depending on what poll you look at, Klobuchar has been standing above a majority of the field (for example, a recent Monmouth University poll has her at 5 percent in early voting states – also noting that 70 percent of Democratic voters at least know of her).

And with many months to go until the first-in-the-nation Iowa Caucus, slow and steady consistency is something a lot of candidates would love to have right now.

With a field of candidates as large as this, anything above one percent this far ahead of the Iowa Caucus should be treated like a notable advantage.

Last weekend, Klobuchar’s campaign held a birthday event at Jasper Winery in Des Moines, where so many people showed up, people were looking in the windows for a peek of the 59-year-old Senator addressing the crowd. So, there’s no lack of enthusiasm, or at least curiosity, about her candidacy, either. 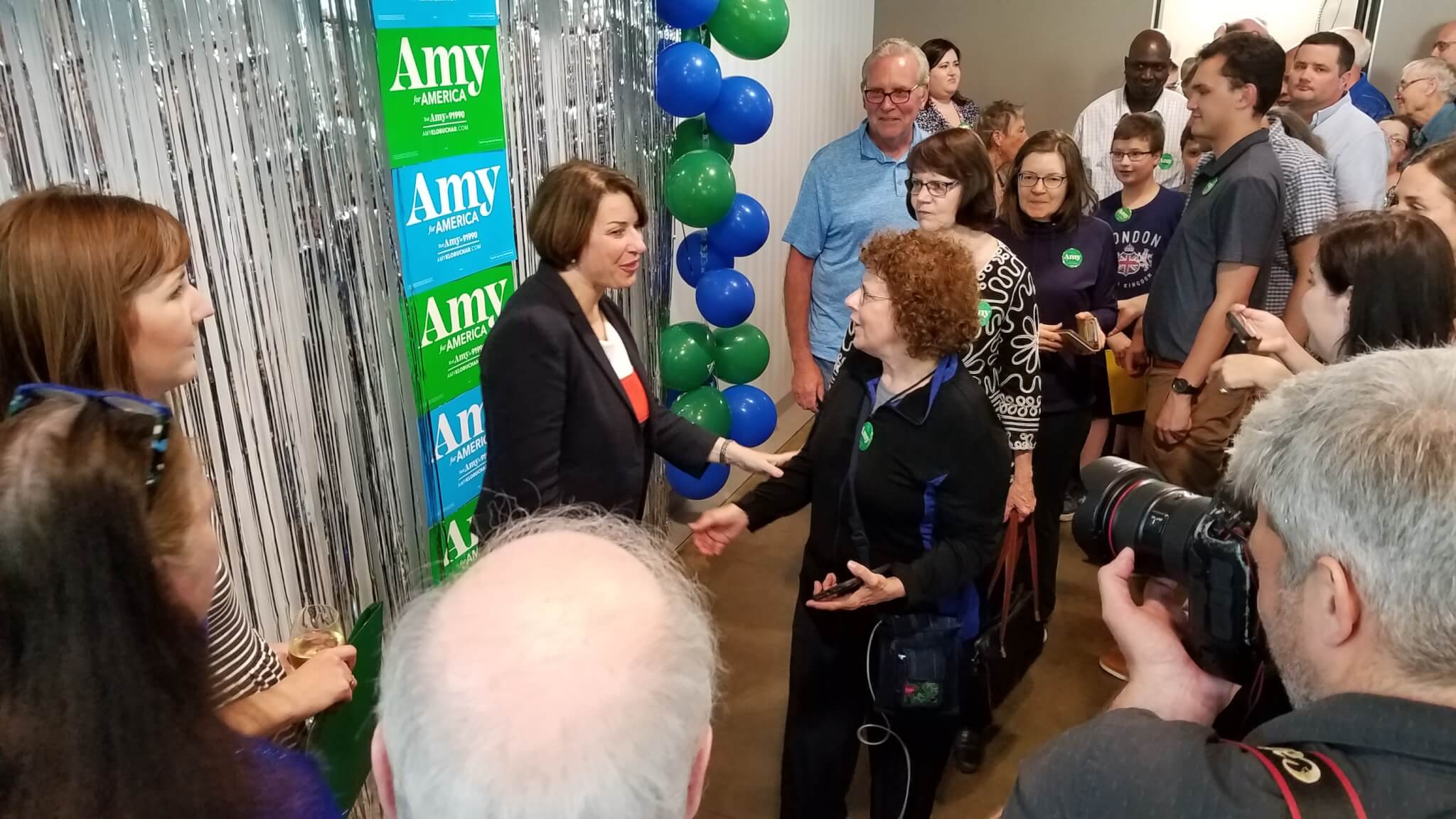 Additionally, despite less attention from national cable news, Klobuchar is polling just below or on par with Beto O’Rourke, who had an initially huge media presence during his first trip to the state.

After President Donald Trump’s victory over Hillary Clinton in 2016, some within the party worried whether a woman could win the general election against him in 2020. And right now, the Democratic primary polls are all led by men. But there’s still a desire for Democrats to get a woman on the ticket – or at least have a more diverse ticket.

Electorally, it shouldn’t be considered a disadvantage to be a woman running for president, especially after so many women made a show out of beating Republicans in the 2018 midterm election.

Brookings Institution called 2018 the “Year of the Woman,” with 52 percent of the electorate being composed of women.

The Monmouth University poll states that the six women running, including Klobuchar, now share a total of 27 percent support among the field of 2020 candidates, an increase from previous shares of support at 16 percent in April and 21 percent in March.

These indicators, coupled with the catalyst of conservative states like Alabama and Missouri harshly restricting reproductive rights (further mobilizing female voters), could weaken the conventional wisdom that President Trump’s advantage heading into 2020 is an older, moderate, white male electorate.

If at least one of these de facto abortion bans does make it to the Supreme Court, Klobuchar’s stand-out moments in the Brett Kavanaugh confirmation hearings could come full circle.

That all gives Klobuchar plenty of opportunities down the road to both break out in Iowa and beyond. Heading into her official announcement, the core theme was good, old-fashioned Midwestern grit, and there aren’t any hints of that changing.