Voters might find themselves Googling his name, or they may recognize him from a recent viral video of a blistering Senate floor speech against colleague Ted Cruz.

Colorado’s Senator Michael Bennet dropped into Iowa this past weekend to meet with and listen to Iowa voters as he considers joining a crowded Democratic field. Stopping at house parties in Waukee, Johnston and Winterset, Startling Line estimates Bennet had face time with over 200 Iowans across those three events.

The former superintendent of Denver’s public schools, Bennet got frequent questions on education at his Waukee stop. The father of three daughters, part of Bennet’s motivation for considering a run, he says, is to fight leaving behind less opportunity for their generation than what was available to his.

“We need to understand what our parents and grandparents did for us, and we need to do the same thing for our kids and their kids coming after us,” Bennet said. “That includes having a political system that is actually functional.”

Major parts of what Bennet sees as that functional political system is changing the role money plays, namely Citizens United.

Shane Nelson, a union member from Madison County, asked Bennet about his view of overturning the Supreme Court decision.

“We’re going to have to make this a voting issue on behalf of the American people, in order to change it,” Bennet said. “I used to say that reading the majority opinion of Citizens United was like reading a seventh grader’s American government paper, and then I decided that was insulting to seventh graders. It’s a mess.”

Nelson, who supported Bernie Sanders in the 2016 primary and is supporting him again in this primary, said he appreciated Bennet’s answer on money in politics, but hopes to see more emphasis from candidates on the topic.

“He had a sensible answer. His answer to the money in politics answer was definitely a good one, but can you drive that conversation,” Nelson said. “That’s what it would take to get me to vote for any candidate, congressional or senate or presidency, because it’s great for just the president to get there, but it won’t do any good.”

Bennet addressed just that when talking about another issue near to his heart: climate change.

“Climate cannot be fixed two years at a time,” Bennet said, arguing that current campaign finance laws will always find a way to undermine environmental action. “We’re going to create a durable solution and an imaginative solution. That’s going to require us to get to a place where we’re not putting in some rules one congressional term just to have them rip them out the next congressional term.” However, Bennet declined to favor or oppose the Green New Deal, a increasingly popular policy for 2020 Democratic candidates.

Lori Ryner of Winterset, who describes herself as a “left-leaning centrist,” and says she at times has some “old school Republican blood” in her, says she approved of Bennet’s beliefs.

“I think he described every problem correctly. I’m a pragmatist,” Ryner said. “So far of the existing candidates, I’d be behind Amy Klobuchar or Michael Bennet. I don’t want everything free for everyone all the time, I don’t like the belief in it and I don’t like the saying it to get votes. I think we need to be really grounded and have to have someone who is good at restoration.”

Bennet brought up a recent MSNBC on-screen graphic where the station classified him to the right of other major candidates, a premise that he rejected, describing himself proudly as a “pragmatic idealist,” something voters like Ryner might latch on to. With so many candidates already having announced they’re running, the centrist, middle-of-the-road position could make candidates like Bennet distinguished from the larger scene of more progressive policy proposals. 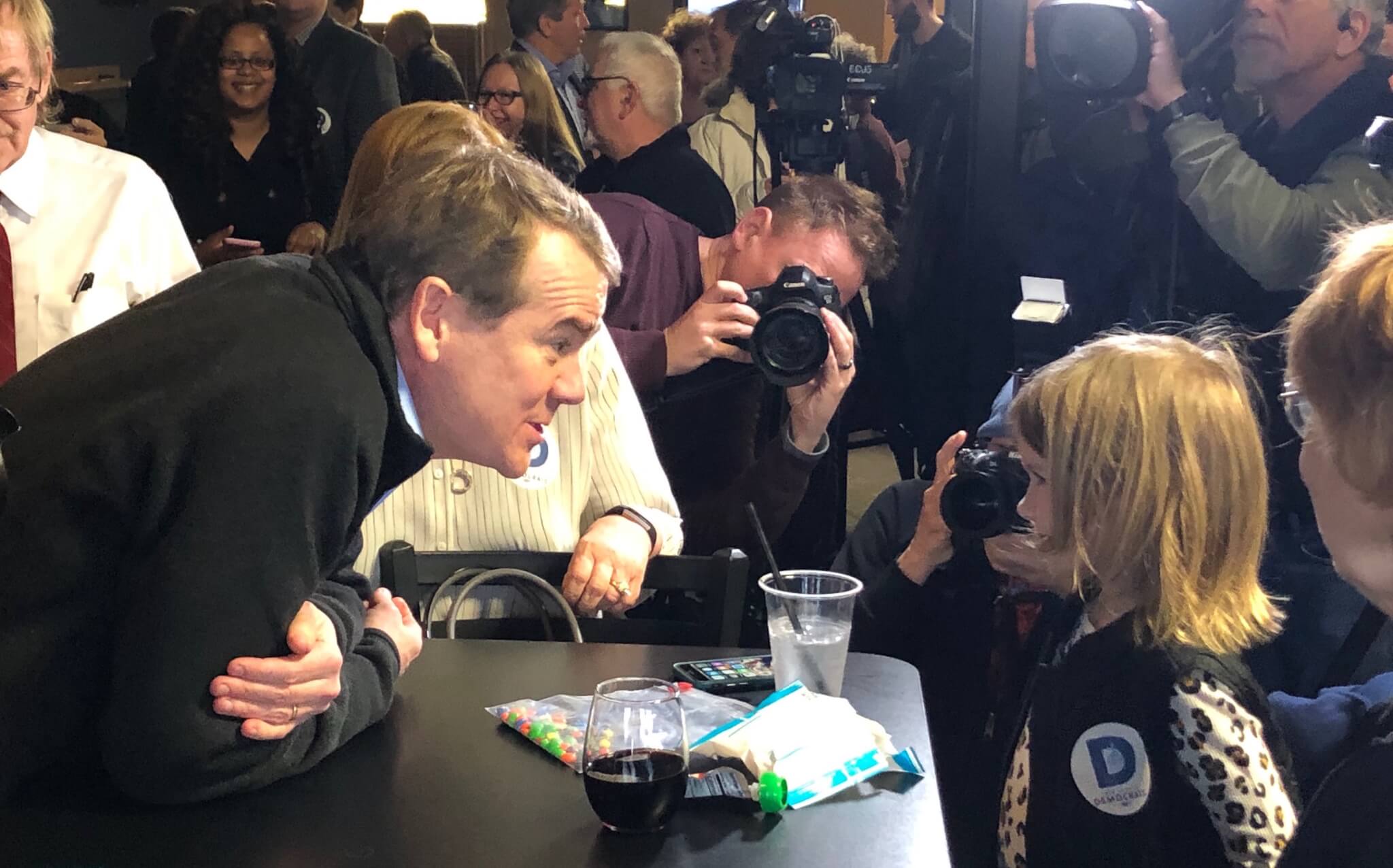 “I don’t think there’s any getting out of the fact that we’re going to have a ton of candidates,” Bennet said. “And I think that’s okay, this is more wide open than it’s ever been before and this crucible of running is going to determine who’s going to win. I think for better or worse, that’s our system, and you’re lucky in Iowa to be able to play an outsized role in all of that.”

Bennet framed this primary as a need to aim higher than just beating the current occupant of the White House, repeating a 2020 trope of saying Trump is a symptom, not the cause, of America’s problems.

“For me, this is not a campaign just about beating Donald Trump. He’s a reactionary president that we need to move beyond,” Bennet said.

At his house party in Waukee, Tom and Christie Vilsack both helped organize the event and introduced Bennet. The Colorado senator served on the Agriculture Committee while Vilsack was the USDA secretary.

If Bennet were to run, he wouldn’t be the only Coloradan in the running. Former Colorado Governor John Hickenlooper has an exploratory committee and several Iowa stops to his name.

One interesting observation: Colorado was the first state to legalize recreational weed, but neither Hickenlooper nor Bennet have mentioned marijuana legalization unless prompted by voter questions. However, Senators Kamala Harris and Amy Klobuchar have both advocated for legalizing the drug in recent weeks on the campaign trail in their bids for the nomination.