Sean Bagniewski was elected as one of the youngest chairs in the history of the Polk County Democratic Party in March of 2017. As his first term comes to a close, he authored this series of four articles for Iowa Starting Line on what has worked well in Iowa’s largest county party, home to almost one third of the state’s Democrats and a prime battleground for the Iowa Caucuses.

In this third of four installments, he discusses the need for the Democratic Party to be a bigger community for the wave of voters activated since 2016. He also examines the success of Polk County’s first foray into an absentee ballot mail program.

WHEN DID POLITICS STOP BEING FUN?

Over the last several decades, both political parties seem to be drifting further and further away from the volunteers and voters. The parties ask for your vote before an election. The parties will ask you for money. They spend a lot of money on television ads and mail pieces. They spend some money on professional staffers to ask volunteers to doorknock or phonebank, especially in the weekend before the election.

The Democratic Party used to be a community that you belonged to. You would go to your work, your union hall, perhaps your place of worship, and your Democratic Party headquarters. In the last election, I heard the address of the Coordinated Campaign office for Polk County only once. I never visited it. I was told that the address was secret because they didn’t want people just stopping by. That’s literally the point of a campaign office.

The Ankeny Democrats headquarters had a philosophy they labeled “radical hospitality.” When a volunteer walked in the door, the person leading the office would drop everything to greet them. No matter what else they had been working on, that volunteer became the most important person in the world. Their volunteer numbers soared. We worked hard to maintain that approach wherever we went.

One of the first things we did was find a volunteer to design a new Polk County logo that people could recognize and be proud of. We put it on fliers, bumper stickers, banners, buttons, shirts, aprons, lanyards, convention credentials, and everything else we got our hands on. The Polk County Democrats walked in every parade and hosted a booth at every event that would accept us. We bought a booth kit (table, tent, chairs, table cloth) with our logo for every festival we could go to.

Those stickers got people to our booth, as did the chance to take a picture with our fiberglass donkey, lovingly named Daisy. When the parades started rolling, an amazing local carpenter attached Daisy to an old jet-ski trailer so she could be a float, and she was a hit at every parade. When we were there, people knew it.

We were “there,” everywhere we could be. There is no way to quantify how important it is for Democrats to be “there”… although we do know this much:

The festivals and farmers’ markets and parades tend to be lower on the scale of importance to some of the modern campaigns. The value of these opportunities is that they often provided an opportunity to volunteer for folks who didn’t want to just knock doors or make calls. If someone is in a voting booth and they’re split on which party to vote for, the folks who cared enough to be at their farmers’ market or Grimes Governors Days could be a tiebreaker.

The logo was so popular that we had a rainbow version printed up on stickers for Pride Week. We’ve had to order three more print runs of it since then. People regularly ask if they can buy them (they’re always free of charge). The free buttons we gave out during our county convention have been featured in pictures all over social media, including as Christmas tree ornaments. When was the last time you saw 1,000 Democrats wearing the same button? Why don’t we do it anymore?

We cut back because buttons and stickers cost money and only supporters want them. This may be true, but I think we can agree that a sticker on your friend’s car, a sign in a favorite neighbor’s yard, or a shirt on a coworker at a summer picnic carries more weight than that eighth mail piece each fall. The buttons and stickers cost a tiny fraction of what it takes to design, print, and send those mail pieces.

The value of a headquarters and festivals and parades and stickers is immeasurable. And that’s a big problem in an age where everything needs to be quantified and compared or it’s not real. What I’m trying to say, though, is that we live in an age of increasing isolation. People aren’t defined by their jobs. Social media is connecting, but also isolating us. There is no central source of news or truth anymore.

People are craving a community, they’re craving a connection. Sometimes that’s eating cold pizza at headquarters and begging voters to turn their damn absentee ballots in already. Sometimes it’s wearing the same button as 999 other people in the same room. Sometimes it’s attending a rainy Steak Fry with hundreds of people who are as passionate about politics as you are.

Are we a political party that’s just here to fundraise and produce glossy mail pieces, or are we here to host the fish fries that Barack Obama fell in love with? If we aren’t going to be a community for people in a world of increasing chaos, we won’t be a viable party much longer.

The Polk County Democratic Party had an interesting problem in the summer of 2018. Our one paid position was open, so we found ourselves wondering what to do with money that had been budgeted for salary and health insurance. One idea was to divvy up the money and give it to the Polk County Democratic candidates for their campaigns. We had more than 30 candidates, though, and splitting the money 30 ways meant small contributions for everyone. We decided on one big effort.

Based on advice from Senator Tony Bisignano, Supervisor Angela Connolly, and several volunteers, we decided on a “ticket mailer” with names and photos of candidates, along with an absentee ballot request form. Public voting records told us which Democrats had absentee voted in past elections. Though many of them had received absentee ballot mailers from other campaigns, thousands of regular voters still hadn’t requested ballots. Those were the people we chose for our target universe. Our volunteer graphic designer, Kate Ross, somehow squeezed all the candidate pictures and the ballot request into one mail piece. It was colorful. You wanted to look at it. 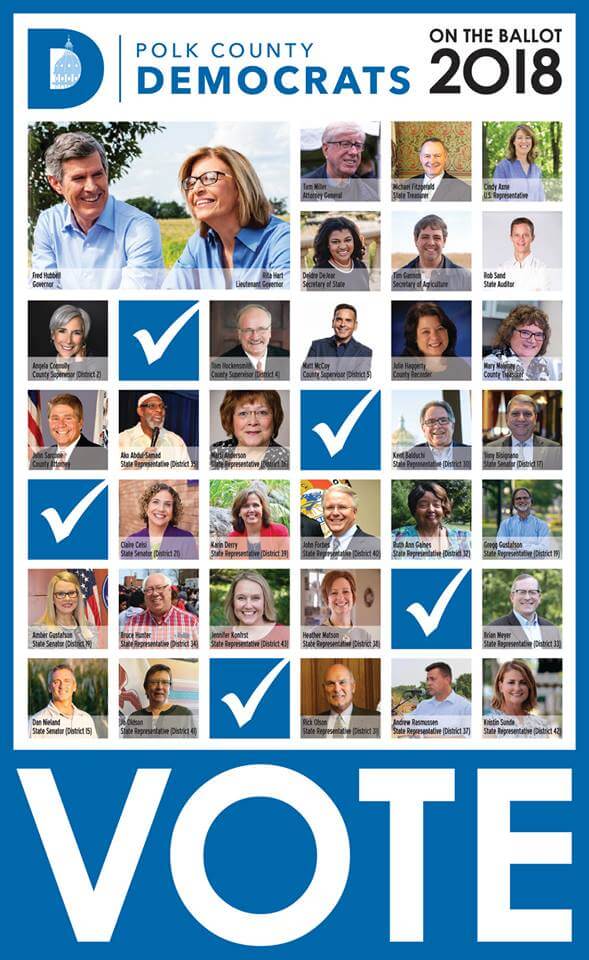 I’ll admit, I didn’t think it was a very promising idea at first. My friends who were professional staffers said it was stupid. They said we should be focusing on the “persuadable” voters with generic messaging instead. I was wrong. They were wrong. The mail piece was a hit. We tested the idea out with 7,000 voters. More than 2,400 of those absentee ballot requests were turned in to the Polk County Auditor’s office. We know that number is accurate because we paid for their return postage. A more than 30% return on any piece of political mail is amazing.

A few things made this piece stand out. For starters, it said the word Democrat on it. One of the voters who received it told our County Recorder, Julie Haggerty, that this was the only mail piece that she knew was actually from the Democratic Party. With all the horror stories we’ve heard from across the country about fake ballots and ballots not being turned in, that’s a very real concern. If we’re sending mail to a regular Democratic voter, there’s no reason for us to be embarrassed about saying the word Democrat on it.

More importantly, it was a piece that allowed us to showcase the historic nature of our 2018 ticket with more women and people of color running for office than ever before. As we’ve downplayed our candidates and the Democratic brand, we’ve instead relied on ethereal stock imagery that is often used and reused in races across the country. You know what I’m talking about. The classroom. The field. The industrial equipment. The pictures of people who don’t even live in Iowa. The pictures of crops that we know don’t even grow here. It’s bland and often thrown in the recycle bin. With a little creativity, though, we celebrated our ticket and added more than 2,000 votes with a very limited voter universe. We’ll do even more in 2020.

Up next: The Great Polk County Ballot Chase, a heretical ode to yard signs, and the road to 2020.