The 2017 blizzard continues this summer, not with blowing snow, but with political maneuvering taking place in Washington on ‘healthcare reform.’ For the record, it is really not ‘healthcare’ that is being addressed by the Republicans, but a ‘health insurance’ makeover – specifically for non-employer coverage purchased by individuals and Medicaid (for low-income Americans).

Real ‘healthcare’ reform would aggressively attack the root causes that make insurance grossly expensive. Instead, the political insanity continues by focusing on the symptoms of the core problems – the exorbitant health insurance premiums we pay. In lieu of reducing the enormous waste built into American healthcare (waste that is an unnecessary cost to many of us but an entitled revenue to entrenched players in the healthcare arena) we continue to confront the never-ending battle downstream of “who should pay and how much?” This problem will continue to persist because of the unwillingness to confront the brutal facts about waste. Einstein’s definition of insanity fits this issue remarkably well.

After Senate Republicans test-launched their trial balloon on June 22, also known as the Better Care Reconciliation Act (BCRA), we now have a better understanding of the impact it will have on each state regarding insurance premiums, the number of those who will be insured and uninsured, and, to a lesser extent, the financial tension on state budgets. Additionally, insurance companies, health providers and other stakeholders have watched with bated breath on how their business world will be impacted by political alterations to health coverage.

After scoring the BCRA, the most notable news coming from the Congressional Budget Office (CBO) report was the projection that 22 million people would lose health insurance by 2026, in addition to millions more seeing increased out-of-pocket costs. (The Urban Institute projects that Iowa will have 232,000 more uninsured by 2022.) The national increase in the number of uninsured equates to the combined populations of Kansas, New Mexico, Nebraska, West Virginia, Idaho, Hawaii, New Hampshire, Maine, Rhode Island, Montana, Delaware, South Dakota, North Dakota, Arkansas, Vermont, Wyoming and the District of Columbia. Given the recent backlash to the CBO score, Senate Republicans have delayed their vote on this legislation until sometime after the holiday break.

A new Kaiser Family Foundation map compares county-level projections of premiums and tax credits for marketplace enrollees under the Affordable Care Act (ACA) in 2020 with estimates for the BCRA. Both the ACA and BCRA include tax credits that factor in family income, local cost of insurance and age. Eligible enrollees pay a certain percentage of income towards the cost of a benchmark plan, while tax credits cover the remainder of the premium. Further assumptions of the map are explained in the Kaiser link above.

Using the Kaiser map, the following slides suggest that coverage losses would be borne disproportionately by people with low-and-moderate incomes and by older people who purchase their own coverage – prior to becoming eligible for Medicare.

As an example, under the ACA, a 60-year-old enrolled in a silver-level marketplace plan in Polk County with an income of $20,000 has an average premium of $8,600. His tax credit covers all but $950 of his costs. Under the BCRA, the premium for this same person would be almost $3,000 higher than it is under the ACA. And, even after receiving the tax credit, he would be paying $2,340 – an increase of 246 percent over the ACA plan. If he lived in Appanoose County, he would be paying $3,520 more under the BCRA plan versus the ACA plan – an increase of 371 percent. 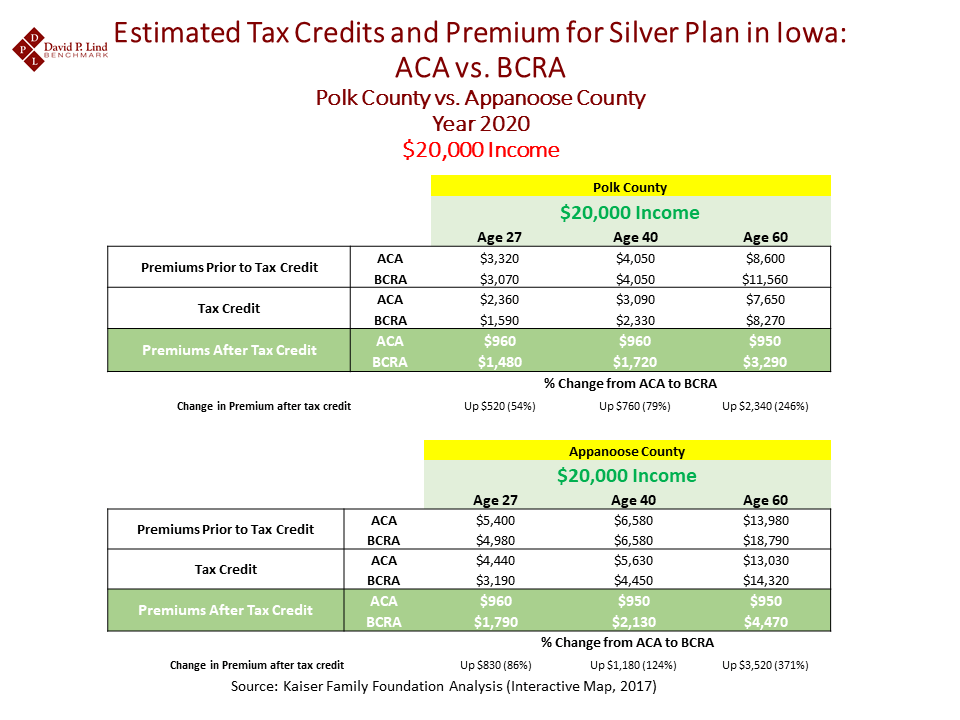 Below are two other summaries of how people compare based on age (27, 40 and 60), income ($40,000 vs $60,000) and location (Polk and Appanoose counties). Generally speaking, the comparisons suggest that as income increases, the younger people will pay less premium under the BCRA when compared to being enrolled in the ACA. Older enrollees, especially those in higher-cost counties, will pay more under the BCRA plan.

Below is the comparison for individuals earning $40,000. 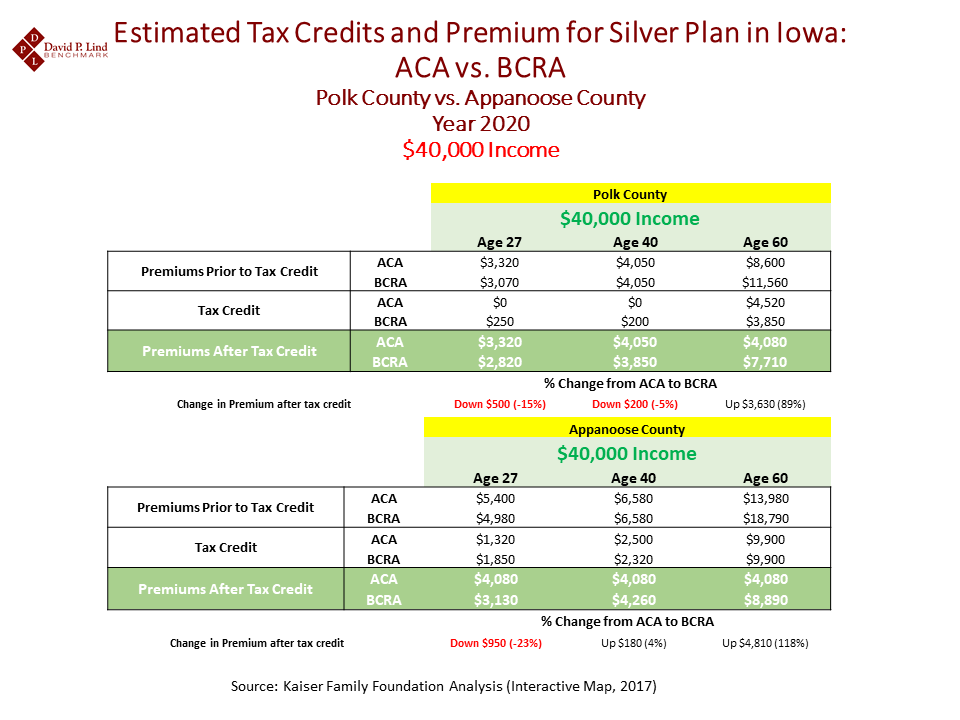 Below is the comparison for individuals earning $60,000. 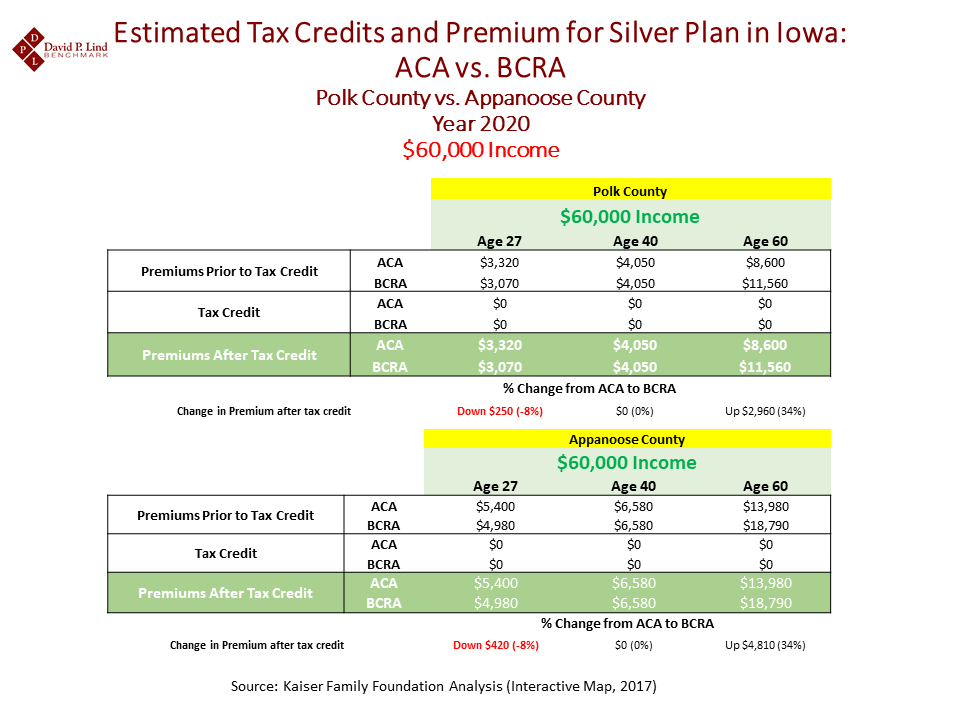 As the summer continues to heat up, so too will the blizzard of activity toward fixing the symptoms of a much bigger problem.

To learn more, we invite you to subscribe to our blog.