There was a moment about halfway through last night’s town hall in Cedar Rapids when a guy everyone seems to know, Dale Todd, approached our congressman with his teen son Adam. Into the mic, he said he was going to bring the discussion back to health care–maybe the third or fourth question on the topic in the first 40 minutes of what would be a 90 minute event. Mr. Todd specifically wanted to talk about waivers and Medicaid.

“Adam has a rare form of epilepsy,” he said. “He is on Medicaid, and will be for his entire life. His school nurse is paid by Medicaid.” So how, Mr. Todd wanted to know, could Blum vote for a health care bill that strips tens of millions of dollars from this essential program? Adam clung to his father in a posture that appeared as much about his need for physical support–one man leaning on another–as about an emotional bond–the embrace of father and son. The entire room was on its feet, waving their green cards to show support and approval for the question. My low spirits lifted. Yes. This is Iowa.

Our congressman replied in his customary flat-footed manner: platitudes about protecting our most vulnerable citizens, such as veterans, “law-abiding” seniors (huh?), and those “with special needs”. Then, raising his voice in the way speakers signify the approach of a memorable turn of phrase, he said if it were up to him, he wouldn’t cut “ONE DOLLAR” from Medicaid. A bald-faced lie, maybe the 10th of the evening.

Just like that, my spirits fell again. The crowd erupted in jeers, their red cards obstructing my view from the second deck of the bleachers. I remained seated, chin in my hands, demoralized by this persistent chicanery. You voted to gut Medicaid! yelled the woman behind me. A large, enraged man ran across the upper deck toward the stairs, and a small group of staff quietly mobilized to intercept him at the bottom. For a moment, I thought we would be witness to violence.

Representative Rod Blum (IA01) is not having a good week. I wish I felt better about it. I wish the experience of watching him face his relentless opposition filled me with schadenfreude. But instead I left his town hall feeling sad and cynical and totally, utterly without faith.

Let me back up.

In March, Blum vowed not to vote in favor of the AHCA. Last week, of course, he supported the amended bill that, while DOA in the Senate, still means something. It still signifies a rough framework for what the House GOP would like to accomplish. And it still sends a message about values, specifically what House members are willing to sacrifice in pursuit of a “win.” 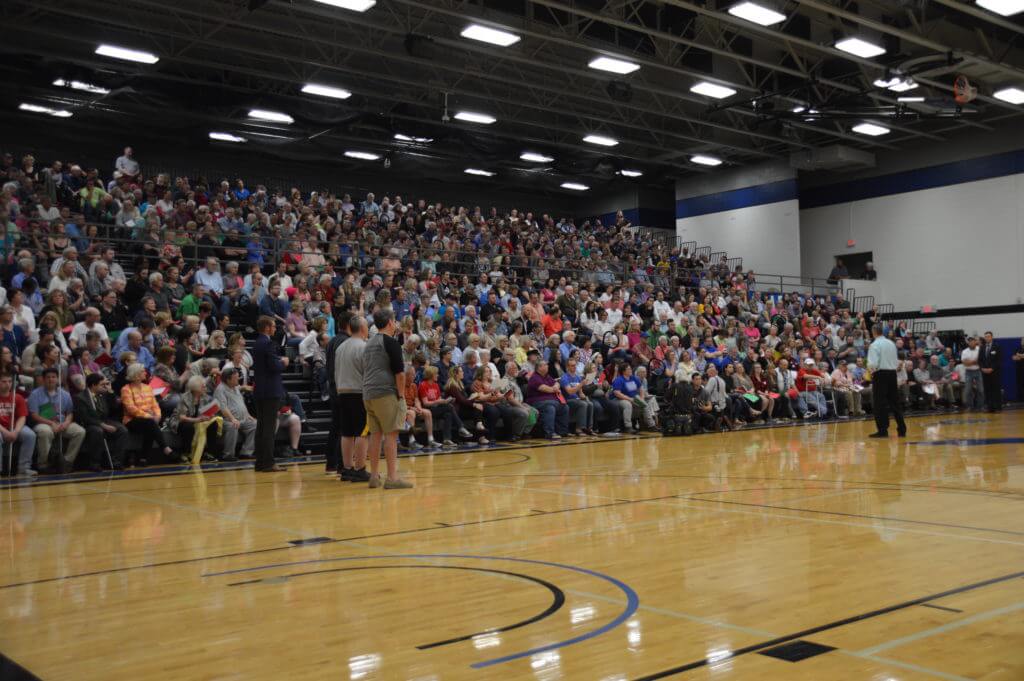 Around the same time that the health care vote took place, Blum’s office announced four town halls in Iowa this week. Three or four weeks ago, facing criticism, Blum told Iowa Public Radio that “real Americans” don’t request town halls (?), that he wasn’t keen to hold events where he would just be “yelled at” from people outside his district (“from Chicago and Minneapolis”) who he does not represent.

So, four town halls is a big deal! On the same day the events were announced, constituents learned they’d also have to register for tickets and show their IDs to prove they are bona fide members of the district. The next day, writing for the Gazette, Lynda Waddington criticized this practice, comparing Blum’s policies to those of the Stasi, and suggesting that if Blum wasn’t keen to face ire from outside his district, perhaps he shouldn’t accept campaign contributions from outside his district either.

On Monday, KCRG’s Josh Scheinblum finally managed to schedule a TV interview with Blum, and tweeted a request for questions. I replied, repeating the sentiment expressed by Waddington. (Sidebar: I know that politicians of all stripes rely on fundraisers and donors outside their own districts. At issue here is Blum’s policy of restricting access to public forums only to members of his district, claiming only to represent them, while at the same time making himself accessible to powerful donors from outside the district. It’s not the money I care about, it’s the dishonesty.)

Scheinblum opened his interview with this same question. By now, if you live in Iowa, you’ve seen how that unfolded: surrounded by children at the Dubuque Dream Center, Blum scoffed, removed his lav mic, complained of being badgered, and walked out.

Was I a little bit thrilled? Yes! The story immediately gained national attention–not a good look for Blum. An hour later, he held his first town hall in Dubuque and from where I was sitting (on the other end of the live-stream), he got crushed. Ok! Let’s do this.

I spent part of Tuesday researching the AHCA so I could ask an informed, fair, and specific question about his vote. I wanted to ask about Medicaid, about how he justifies a decision that I perceive to be morally bankrupt.

Like many of us, I’m new to this level of political engagement. But at the events I’ve attended since January–mostly legislative forums with state-level lawmakers–the mood among participants could fairly be described as skeptical but optimistic. There’s been a lot of hope at these events, a hope that motivates tough questions and criticisms of legislators who would otherwise serve as mouthpieces for far-right policy mills. There is belief here, faith that with tireless participation, we can influence the laws that impact our lives and work and future. I’ve left them feeling invigorated, engaged, grateful, connected to my community. That’s no small thing. In fact, it’s a necessary condition for functioning democracy. 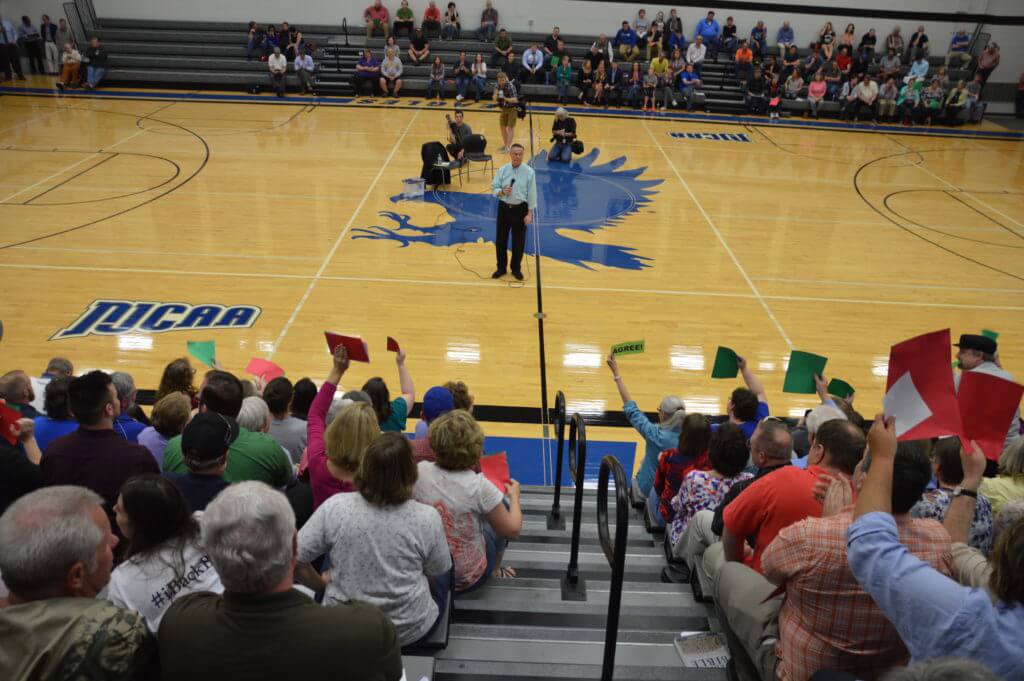 Blum’s town hall was not that. From the moment it began, the crowd wouldn’t let him speak. As he attempted to make some opening remarks, their boos, insults, and other shouted comments of contempt swelled to drown him out before he could get halfway through a sentence. It was 7:22 before the first participant could ask a question, and the pattern continued through the full 90 minutes, everyone competing to be the loudest and cleverest voice in the room. This is not going to work, I thought. We have to talk to him. We have to let him talk to us.

My first instinct was to call the mood hostile, but that doesn’t feel exactly right. It implies that attendees are hecklers, unjustifiably disrupting the political process for selfish ends. That’s not what was happening. What was really striking and different, I think, from other political forums, was the heaviness of the affect in the room. I’m not sure I’ve been in a place so palpably saturated with fear, anger, resentment as that gymnasium was. I understand it. I understand the depth of that feeling. I, too, fear for my quality of life and my financial future when the facts of my biology are coded as a “pre-existing condition,” and I fear for the health of my community when I see the reintroduction of policies that encourage selfish decision making over an ethic of care for others.

Despite this, I didn’t expect to, I guess, feel the mood of the room as deeply as I did. I expected the event would leave me feeling satisfied, maybe smug, at the very least vindicated in moral righteousness. Instead I felt like shit.

I don’t want to rely on the cliche of broken government. That’s a GOP talking point designed to demoralize voters into passive submission to an obstructive, destructive processes. We defeat ourselves when we accept this narrative. But I do think something has ruptured—call it a stress fracture widening under too much pressure; in the six weeks since I last attended a constituent forum, there’s been a cleaving between the people and their representative body.

Still, we know this is the game. Power accumulates and consolidates when opposition forces are too tired or distracted or hopeless to resist. I have to keep reminding myself of a sentiment I’ve heard expressed by a lot of smart and trusted thinkers lately—that politics is people first. Meaning, policy should follow from people. We are Democrats or Republicans or Libertarians based on some alignment of values and beliefs, but we are people with stories and fears and needs first. It’s maybe too much to expect elected representation to lead in this way, but it’s not too much to expect of us, you, me, we. We must lead. We the people. People first. We have to model that, even when–especially when–it is hard, when we are hurting and scared and desperate and looking for someone or something to blame. The pieces are all here. We have to put them back together, to mend the tears and wounds. 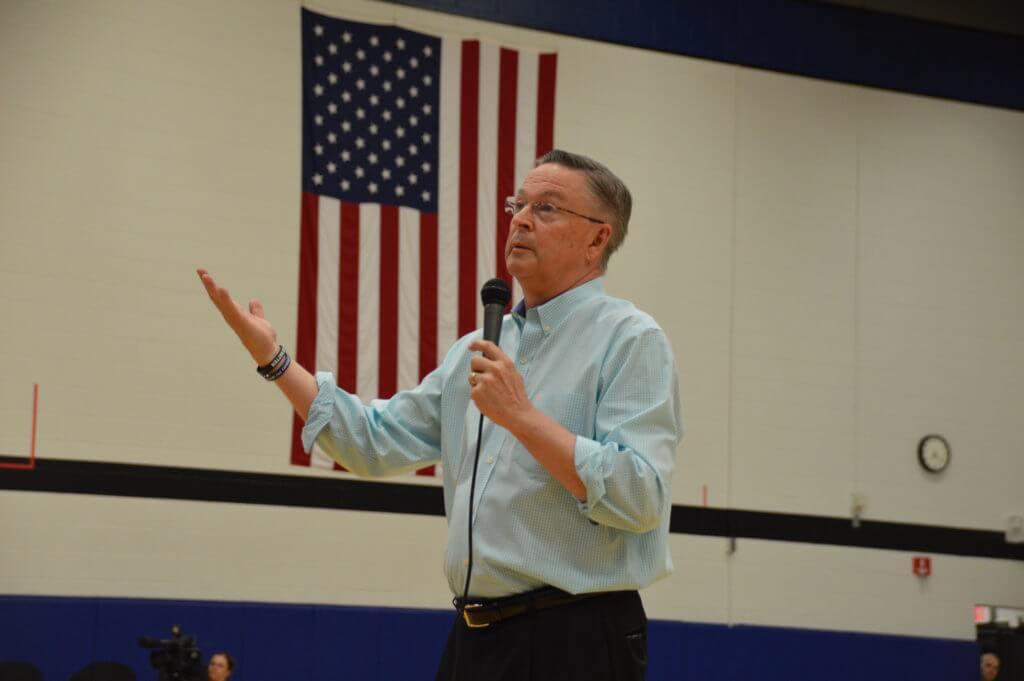 I do think his priorities are out of whack, that his positions are misinformed, that his goals are compromised by his fealty to party politics. What else can explain the ease with which he can shake Dale Todd’s hand, pat Adam on the shoulder, and express unequivocal support for the program that protects this family when four days previously he voted for a bill that will, without a doubt, lower the quality and probably the duration of Adam’s life?

It is a strange feeling to look your congressman in the eye, whether from a distance of a comfortable handshake or from the second deck of arena bleachers, and to listen to him lie to you. Not once, not twice, but countless times over the course of an hour.

I can appreciate some difference in opinion or a healthy discussion of interpretive lenses when it comes to, say, tax policy or an infrastructure plan. But on matters of health care and climate change–by far the most urgent matters of the evening, comprising the vast majority of questions and igniting the crowd’s strongest vocalizations–Blum proved himself unwilling or incapable of considering a point of view outside the one that is most politically advantageous, even when his constituents fact-checked him in the phrasing of their follow up questions.

In an earlier version of this post, I closed by calling for Blum’s resignation. He won’t. But upon further reflection, I realize that can’t be the goal. He is one man. We are his district. That is the lesson here. Politics is not Rod Blum. Politics is people. It is work and organization and research and care and service. It is speaking out and rising up and also getting out of the way, listening to others speak, following when others lead. It is reaching out, asking questions, telling stories, sharing fears, looking each other in the eye, even when we disagree, and saying “I hear you, how can I help?” It is resistance and persistence, heartbreaking and heartmaking. Us, you, me, we. Let’s go.

15 Comments on "After Rod Blum’s Forum, My Mixed Feelings On The Anger And Lies"