While you can’t read about any issues Jake Chapman supports or opposes on his campaign website—votejackchapman.com—his actions in the Iowa Senate paint a clear picture about what he cares about: Controlling women’s bodies, guns, and defunding/defaming public schools.

The Republican from Adel was first elected in 2012 and has served in the Iowa Senate since 2013, rising to the rank of Senate President.

After redistricting, Chapman and Iowa Sen. Sarah Trone-Garriott (D-Waukee) will face off to represent the new Senate District 14, which covers the southeast portion of Dallas County.

Since taking office, Chapman has supported legislation that would use public dollars for private schools, severely limit a woman’s right to choose what to do with her body, and ease gun restrictions—including on school grounds—and more.

During his first year in the legislature, Chapman co-sponsored Senate Joint Resolution 10, a proposal that would amend the Iowa Constitution to make embryos protected, which would effectively ban abortion outright.

In 2016 as legislators were debating a bill that would add gender identity as a protected class in Iowa—as a way to give transgender residents legal protections—Chapman offered an amendment to add the “unborn” to the list. This would have made an abortion a “hate crime” under Iowa law.

In 2021, Chapman wrote a bill that would require the creation of an abortion dashboard in Iowa. Under Senate File 508, any physician who performs an abortion in Iowa would be required to:

Due to the amount of details he wanted to track, there was concern at the time it could be used to publicly identify someone who had an abortion.

Chapman’s name is attached to more than a dozen bills related to abortion including different Senate resolutions from the one mentioned above that would ban the fundamental right to an abortion in the Iowa Constitution.

Other than abortion, no issue has captured Chapman’s issue quite like guns.

In 2013, during his first year in office, Chapman was one of eight co-sponsors—including future US Sen. Joni Ernst—who introduced a bill that would allow someone other than peace officers/military personnel/correctional officers to carry weapons on school grounds.

According to Senate File 251, anyone who had a valid permit to carry a weapon would be allowed to carry them on school grounds. It was considered a Class D Felony for people not in law enforcement or the military to be armed on school grounds.

That bill failed, but Chapman—with no co-sponsors—tried again four years later with Senate File 146, which did the same thing. The bill, which again would allow more people to carry guns on school grounds, failed; however, Chapman and 13 co-sponsors tried again in 2019 under the parameters of a much larger bill aimed at loosening firearm regulations in  Iowa.

In 2017, Chapman wrote a bill—Senate File 256—that would prohibit public colleges and universities from limiting people’s ability to carry “dangerous weapons” on campus. The bill’s definition of dangerous weapons included pistols, revolvers, or other firearms; razors, stilettos, switchblade knives, a knife with a blade exceeding five inches, or any type of electric stun gun.

If school authorities were found guilty of limiting a person’s rights to bring any of those weapons on campus, they could face a fine of up to $5,000 plus the court costs and legal fees of the plaintiff.

Again, that bill failed but Chapman brought it back up in 2020 where it stalled out at the subcommittee level.

Another gun-related bill he wrote in 2017 would prevent licensed healthcare professionals from asking their patients or clients if they own a firearm. The list of health professionals this law would have included is extensive and includes dentists and massage therapists, but it also includes mental health counselors and social workers. 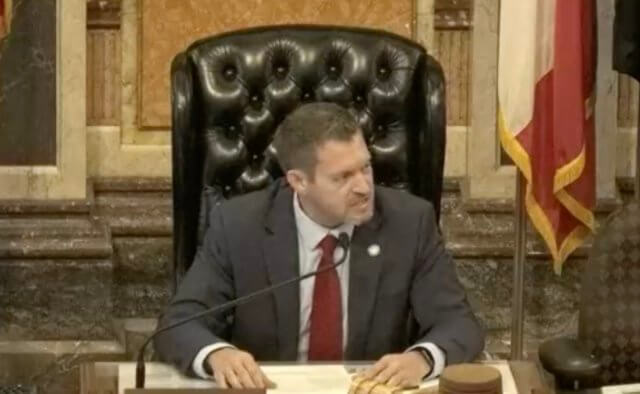 Last fall, Chapman told people at a Johnston School District Board Committee meeting he would use his power as president of the Iowa Senate to make stronger laws to hold teachers criminally liable for books he thought were obscene.

The wide-ranging bill covered everything from civil litigation to how long a teacher should be placed in jail for assigning certain books to stripping county attorneys of legal immunity for not acting on obscene material cases in a timely manner.

His bill would allow parents to take legal and civil action against teachers/administrators and schools for providing the materials. If a teacher knowingly gives a student obscene material, it would be considered a serious misdemeanor, punishable by up to a year in jail and a fine of $430-$2,560 and they would lose their teaching license.

If a parent successfully sued a school for exposing their child to materials deemed obscene, the school would be responsible for both parties’ legal fees. The school would also be assessed a civil penalty of $500 for each day a violation occurred while the case is litigated. The civil penalty amount would be turned over to the Iowa State Treasurer’s Office to be added to the state’s general fund.

Chapman’s bill was wrapped up into an overall education package that included Gov. Kim Reynolds’ voucher bill that would take $55 million from public schools to support private school scholarships.

Speaking of vouchers, Chapman has attached his name to several previous attempts at creating private school vouchers in Iowa.

In 2013, 2014, and 2015, Chapman co-sponsored bills to create an education savings grant fund, another measure that would divert public school funds toward private school education.

Chapman also hasn’t been shy on his official Facebook in championing “school choice,” which is a less politically scary way of saying taking public school dollars and using them for private school tuition.