After finding out that Pieper Lewis, a 17-year-old sexual assault survivor from Des Moines who killed her rapist, would have to pay $150,000 in restitution to his family, thousands of people across the internet raised close to $400,000 to free her of a burden they felt was unjust.

Pieper’s attorney argued during Tuesday’s sentencing that she should not have to pay restitution, but Polk County District Judge David M. Porter based his ruling on a 2017 case involving an underage girl who committed a murder, according to the Des Moines Register.

Thanks to the GoFundMe campaign, which was set up by one of Pieper’s former teachers and boosted by the Des Moines Black Liberation Movement, community activists, and local and national media, Pieper may not have to pay for the restitution herself (her attorneys are making sure there are no legal hiccups, according to the Register.) 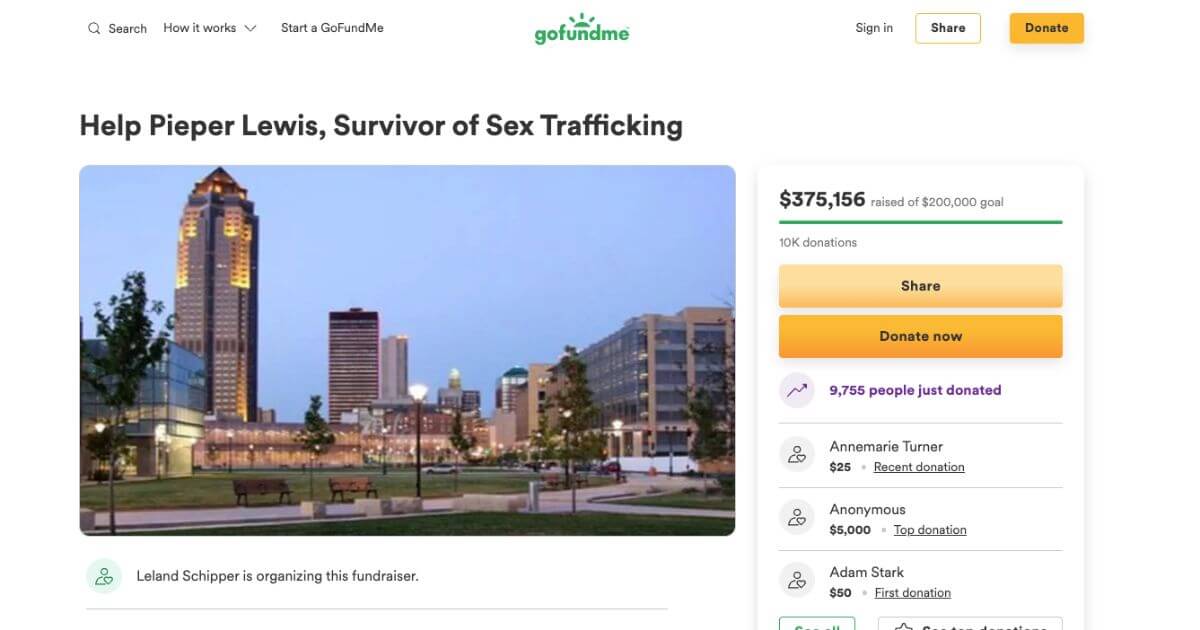 However, it still caused a lot of people to wonder: Why does Pieper, who was 15 at the time, have to pay the family of the man who she said raped her multiple times before she fatally stabbed him?

The answer can be traced to Iowa Code Chapter 910, a law that requires people convicted of a felony that caused the death of another person to pay the estate of the deceased at least $150,000 in restitution. The law was enacted in 1997.

The section that would apply to Pieper’s case is Chapter 910.3.B (Restitution for death of a victim). The law does not provide any situational or age exceptions for people convicted of causing the death of another.

Chapter 910.3.B still allows the family of a homicide victim to sue the person who committed the crime. Also, were the perpetrator to file for federal bankruptcy, they would still be responsible for paying restitution.

In the 2017 ruling that also featured a female juvenile offender involved in a murder case, the Iowa Supreme Court ruled that restitution awarded under Chapter 910.3B is considered part of the “sentence.”

The ruling also found that the $150,000 award in the chapter was not unconstitutionally “excessive.”

The state’s high court argued that juvenile offenders would still have to pay severe penalties if Chapter 910.3B didn’t exist and that they are in a better position than adult offenders to pay off such a large sum:

“In fact, juvenile offenders like Richardson could be in a better position than comparable adult offenders to repay $150,000 restitution because of their younger age and the shorter period for which they will be incarcerated,” the ruling states.

The court also noted that Chapter 910 doesn’t require offenders to pay the entire $150,000 all at once and the plan can be amended based on income and circumstance:

“It is true that a restitution payment plan requires regular periodic payments, but most Iowans carry ongoing financial obligations as part of their monthly lives, such as home loans, car loans, credit card debt, and student loans,” the ruling states.

While Iowa Republican officials have been silent on seemingly every aspect of Pieper Lewis’ case, Iowa Democratic officials said they would be willing to make changes to the law when a new legislative session starts in January to address situations similar to this one.

House Minority Leader Jennifer Konfrst (D-Windsor Heights) said she agreed with Wilburn that a change has to happen.

“This is something that we do need to look at,” she said. “Any everyday Iowan can look at this and say it doesn’t pass the smell test.”

Konfrst said Pieper was clearly a victim; the man whom she killed was not the only person she told the court she was raped by and the man who is accused of forcing her into these situations was never charged.

“While probation is better than what could have happened, the justice system isn’t treating her the way she deserves to be treated,” Konfrst said. “She shouldn’t have to rely on a GoFundMe account to pay restitution to her abuser.”

Konfrust said she doesn’t view what happened to Pieper as justice.

“I think anybody would see this situation and say this [isn’t] how the justice system is supposed to work,” Konfrst said. “So let’s work to fix it.”

1 Comment on "Explainer: The Iowa Law That Requires Pieper Lewis To Pay Her Abuser’s Family"