Well, that and someone who shares their values.

Figaro, who announced she would run for an open Iowa Senate seat in January, is an epidemiologist used to caring for people for the last 25 years, so she knows she’s got the first part down. And from the door knocking she’s done, and listening to all the people she’s spoken with, she thinks her Bettendorf-based Iowa district is turning away from the Republican Party as it exists today.

“They are against authoritarianism,” Figaro said of conservatives she’s encountered. “And then they are worried that women’s rights are being encroached upon—again, we’re a democracy. Then they worry a lot about education, and they do not feel comfortable with Republicans and the way that they discuss education.”

Iowa Senate District 47 has been held by Republicans for decades, through multiple redistrictings and number changes. After the 2020 redistricting, it now encompasses Le Claire, Eldridge and rural areas around the Quad-Cities. 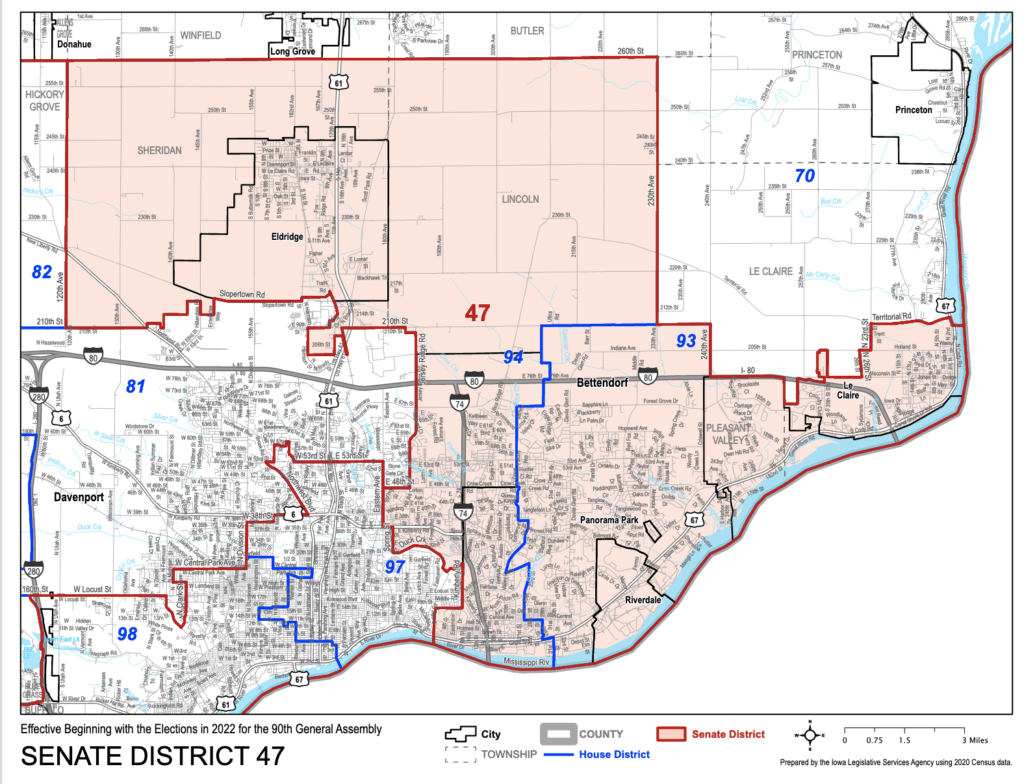 But Figaro thinks she’s got a chance to flip it this year. Her strategy rests on the theory that many Iowa voters are tired of fringe elements swallowing up the GOP, and are ready to vote blue to save democracy.

“I have character and integrity, and I believe in freedom and democracy—that’s it,” she said. “I think values matter more than issues.”

‘Lead in a credible way’

We met at Dunn Brothers, a coffee shop in an area of Davenport where several large housing and commercial buildings were going up across the street. She comes here every week on her lunch hour for Fridays with Figaro, where she opens herself up to conversations with residents.

This past Friday, she was reading the Quad-City Times, specifically the article about US Rep. Jim Leach, a Republican, who denounced his own party after 30 years.

“What he said made a lot of sense to me,” Figaro said, reading: “‘We have an obligation to pull together and vote for anyone who has the moral capacity to lead in a credible way.'”

Leach went on to endorse Democrats running for Congress, including Christina Bohannan in the House over Rep. Mariannette Miller-Meeks, and Mike Franken in the Senate over Sen. Chuck Grassley.

Figaro doesn’t think Leach is an outlier: She thinks there are enough Republicans like him willing to vote for someone like her to flip the district.

Values of her mother

Figaro’s “why,” both to the question of becoming a doctor as well as running for public office, both point to her late mother.

Rosanna Figaro of Davenport, who died in November of 2020 of COVID at the age of 81, “nearly died” birthing Figaro, ensuring Mary Kathleen would be the couple’s only child.

That, in addition to Rosanna’s poor health throughout her life, led to her daughter’s desire to become a doctor, Figaro says.

“My mom had this really good internist who she loved,” Figaro said. “I liked the relationship they had, and I liked the fact that he took good care of her.”

And it was her mother’s death from COVID—a virus Figaro tried to fight off with all available treatments at the time, when no vaccine was available—that similarly spurred her to run for the Iowa Legislature.

“First, I was just despairing—the usual daughter stuff,” Figaro said. “Then, it occurred to me, because my mom is amazing—she’s still amazing—and she would have wanted it to be, not just a pity party, but that I do something. And I really wanted to make sure nobody else’s mom died that way.”

Her expertise as an epidemiologist, as someone with an intimate knowledge of infectious diseases and the best ways to treat and prevent them, would serve her well in building policy to prevent the worst of the next outbreak, she believes. (She doesn’t believe in mask mandates, she says, but nor does she believe a ban on them is the right choice.)

But it’s more than her mother’s death: It was the way she lived her life, as a “fiercely pro-family” woman who passed along those values to her child and two grandchildren. That, for Figaro, means she would make sure parents are making enough money to raise a family, make sure “a family doesn’t have to look a certain way,” and ensure public education is funded well.

“When I say I’m pro-family, it’s truly for my mom,” Figaro said. “We have to make it possible, because (Iowa) is a family-friendly place—which is why we came here to raise our children.”

‘No way we can do vouchers’

Sen. Roby Smith, a Republican from Davenport who currently represents the district, will step down after 12 years in the position to run for state treasurer instead.

Figaro will face Republican Scott Webster, a Bettendorf alderman and developer, in November. Webster bested Republican challenger Barry Long, a council member from LeClaire, with 72% of the vote. Figaro did not have a primary challenger.

Webster told the Times he supported taxpayer-funded scholarships for private school expenses as well as restrictions on abortion, both issues Figaro said voters in her district told her they don’t want.

Figaro talks about abortion as a freedom issue, saying people shouldn’t be restricted either way. It’s part of her “pro-family” stance, which includes a higher minimum wage, better mental health care and maternal health care, and improving education in a state that used to prioritize it.

“Those are the things that I already know that I can accomplish for my constituents,” she said. “They’ll have a mean advocate.”