I’m hiking every beautiful place I can think of around my home state, to showcase the beauty Iowa has to offer. Follow along on social media using #AmieTakesAHike to pass along your suggestions and see where I’m headed next.

On a hot, humid July day, taking a sweaty hike is a bit less appealing.

There’s no better way to check out Iowa’s natural underground beauty than by going through several caves, and no better place to do that in the state than at Maquoketa Caves State Park in eastern Iowa’s Jackson County.

Evidence of ancient Native settlements has been found on archeological digs in and around the caves, particularly in Ice Cave. That includes stone and bone tools, bone fragments, and ceramics.

When European-Americans moved west in the 1830s and stumbled upon the caves, they basically turned them into a summertime Party Central.

Known then as Morehead Caves or Burt’s Cave, the place became so popular—dances were actually held in Dancehall Cave, an 800-foot behemoth—that by the turn of the 20th century it had degraded in quality and lost most of its appeal.

Thanks to a local women’s club and the efforts of federal projects such as the Civilian Conservation Corps, Maquoketa Caves became one of the state’s first state parks in the 1920s and has been built upon, expanded and preserved since. 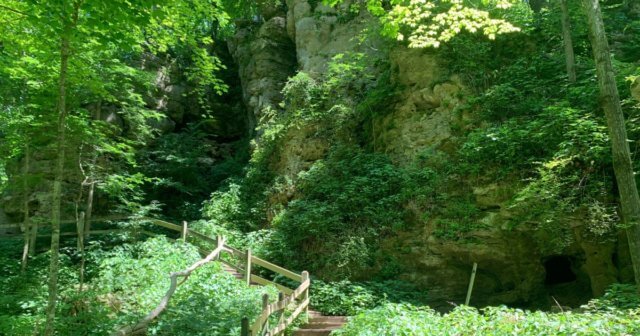 That’s not a coincidence: Caves generally form as a result of rainwater picking up tiny amounts of carbonic acid from decaying leaves or the soil, which over millennia dissolved through the bedrock—in this case, limestone—to form caves. The creek helped that process along, according to posted signage.

In the case of the Maquoketa Caves, those caves range from the squeeze tunnels of Wye Cave to the large Dancehall Cave, a lighted, paved, 1,100-foot long cave you can walk (or slightly stoop) through.

But you don’t have to go spelunking to enjoy the park, which is beautiful on its own and includes a restored prairie and an “experimental oak savannah” restoration.

I started off to the northern Ridge Trail, headed for Cave No. 1, the Wide Mouth Cave, and wound down past several more caves and underneath the road to the south.

The trails are well-trod and well-maintained—workers were actively fixing some staircases on the mid-July day I went—and there were a fair amount of people, especially families, for a Tuesday morning. But the hiking trails that don’t lead to caves aren’t as populated, and they’re still gorgeously creek-cut, with plenty of elevation.

But, of course, I had to check out some caves. Although I’ve definitely gotten slither-on-my-belly dirty in these caves before, I decided just to go as far as a mild stoop this day, instead peering in as far as I could see with my terrible flashlight and only slightly better phone flashlight.

The Dancehall Cave (Upper, Middle/Steelgate, and Lower) is a great beginner’s or claustrophobe’s cave. You don’t have to do more than stoop (and if you’re under 4 feet tall, not even that!), and the sheer size of the limestone is breathtaking.

No matter what cave you check out, the process of water-through-limestone is apparent. Look up, and you’ll see the tiny calcium-deposit stalactites; keep looking for a minute or so, and you’ll probably see it drip a drop of water. That drop went through SOLID LIMESTONE, and forms those stalactites (and their floor cousins, stalagmites) at a rate of one inch every century. Iowa geological history being made right in front of your eyes!

The sights and sounds

The eastern part of the park, where the caves are, is popular. As such, there’s not much wildlife out and about besides the birds and an occasional skittering chipmunk.

I was hoping to spot some bats, but also it was in the middle of the day and I wasn’t crawling very far in. (The park closes its caves from mid-October through mid-April to protect the bats’ hibernating season.) But the lovely water sounds, from the wandering creek to a small waterfall to the drip-drop echoing off of cave walls, provided a lovely ambiance to go with the birdsong.

The caves themselves are (generally) marked well at the entrance, but it’s far from clear how far back, down or up they go—all part of the allure for those with an adventurous streak.

This isn’t your normal Iowa state park hike. You should definitely wear water-resistant (if not waterproof) hiking shoes. A headlamp and clothes you don’t mind getting completely muddy in are necessary if you want to crawl or slide through the tighter caves.

I still remember, years ago, going as far down into Wye Cave with two of my friends as we could go. Secret passageways leading to who-knows-what, so long as we’re physically able and brave enough to squeeze through the next opening.

If you also want to test the explorer in you, Maquoketa Caves State Park provides true thrills.