The Osage School Board made two requests in a letter it wrote to the Iowa House and Senate education committees: More funding and no school vouchers.

State lawmakers agreed to a 2.5% increase to State Supplemental Aid on Monday, although some Iowa Democrats proposed a 5% rate instead.

In their letter, signed by all five school board members, the Osage officials argued 2.5% wasn’t a sufficient amount for a number of reasons.

“In our current economic environment, inflation is on the rise,” they wrote. “The costs of goods, services, and transportation are dramatically higher than in previous years. These increases have considerable repercussions as we look at our school budget.”

“Teachers are leaving their profession at an alarmingly high rate,” they wrote. “Insufficient funding precludes our district having the ability to fairly compensate our educators, threatening the future of public education within our district, as well as within the state as a whole.”

The letter said a lack of funding will jeopardize public education and inadvertently hinder Iowa’s workforce.

Republican lawmakers in Iowa want to create a “student-first scholarship” program, which is a variant of a school voucher program, under the guise of school choice. The plan would divert public school funds directly to families in an education savings account (ESA) to help with private school tuition.

Gov. Kim Reynolds’ version of the voucher program would siphon 70% of a public school’s per-pupil funding—$5,359—for the ESA and allocate the remaining 30% to a rural public school district.

Located in northern Iowa’s Mitchell County and serving a district-wide student population of about 900, Osage would qualify to receive those additional funds under Reynolds’ plan.

“Public schools are the springboard for the Iowa economy,” the Osage School Board’s letter reads. “Supporting vouchers and continued funding of SSA at suboptimal levels of less than 4% will undoubtedly have negative implications on the ability of public-school districts to continue to maintain the high standards that our great state has built a legacy of.

“We implore you to stand with us and support public schools.”

Two years ago during her Condition of the State address, Reynolds invited students and representatives from the Osage School District to recognize the district for its work in implementing computer science into additional subjects such as art, English, and math.

“What Osage is doing is amazing, and we need more of it,” Reynolds said. 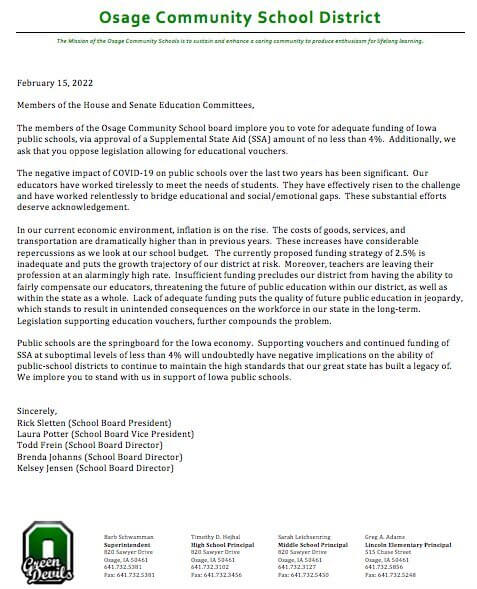