During this time of crisis and social distancing, we keep talking about the heroes without a cape that are on the front lines working, even at their own risk and that of their families.

The well-deserved list includes doctors and nurses that are working long hours to save lives, police officers that are making sure we are safe and the people working in grocery stores that are in constant contact with the public.

Now, how can we forget the farm workers that continue to work so we have food on our tables?

In preparing to stay home during this time, my husband and I went shopping with the uncertainty of what the pandemic may have in store for our family. We are also practicing eating healthy, so fruits and vegetables were a top priority on our grocery list. We wanted to make this a fast trip, yet I could not help thinking of the migrant workers in the fields. The invisible and unsung heroes we have not talked about yet.

As I thought more about it, I decided to reach out to my good friend Daniel Hoffman-Zinnel, chief executive officer of Proteus, Inc. Proteus is an Iowa-based nonprofit organization that has served migrant and seasonal farm workers, immigrants and others since 1979. He put me in touch with Martha Mendoza Mendez, who graciously accepted to share her story with me over the phone.

Martha and her family migrated from Monterrey, Mexico, to San Juan, Texas, in 1984. One year later, Martha and her large family (parents, siblings and husband) came to Williamsburg, Iowa, for the first time to work picking strawberries, apples, de-teaseling and pollinating.

After a while, and in their search for better opportunities, the family went to work in Idaho for a few years until her dad was offered to come back to Iowa, in Coon Rapids. This new job offer meant they would work from May until October and they would make more money by also skipping the contractor. They were further encouraged by the chance to participate in a new program. This program, run by Proteus, provided day care and transportation for kids to attend school. That sealed the deal for them.

Martha’s parents were the first ones to arrive in Iowa in order to find housing for the entire family (more than 20 people). It is not uncommon for a large and extended family to live together in Latin culture. They had a hard time finding a place since nobody wanted to rent to Latinos.

“When my parents finally found a house, they moved in,” she said. “After their very first day at the house they found a white cross on their yard. The cross had some writing on it telling them to leave.

“My parents called their boss because they were afraid to live in that town. They were afraid to bring the rest of the family to a place where they did not feel safe. The police were called, and they said it was the Ku Klux Klan who placed the cross on their yard. Their boss assured them that the police were going to keep an eye on the situation, and they shouldn’t be worried.”

Although they decided to stay, locals made sure the Mendoza/Mendez family felt unwelcome. Martha remembers that stores wouldn’t sell anything to them and there were even some establishments they were not allowed to enter. It reminded me of what I have read of segregation times in the Deep South. It made me angry and sad all at the same time.

Even while facing all these obstacles, her family continued to work in the fields for many years and eventually found a new place to rent in Perry.

By then, Martha and her husband, Miguel Angel, had four grown kids to support and big dreams to fulfill. Their goal was to provide the best education for their children so they wouldn’t have to work as hard as they did. Their wish was for their children to work in professional fields or succeed on their own terms. 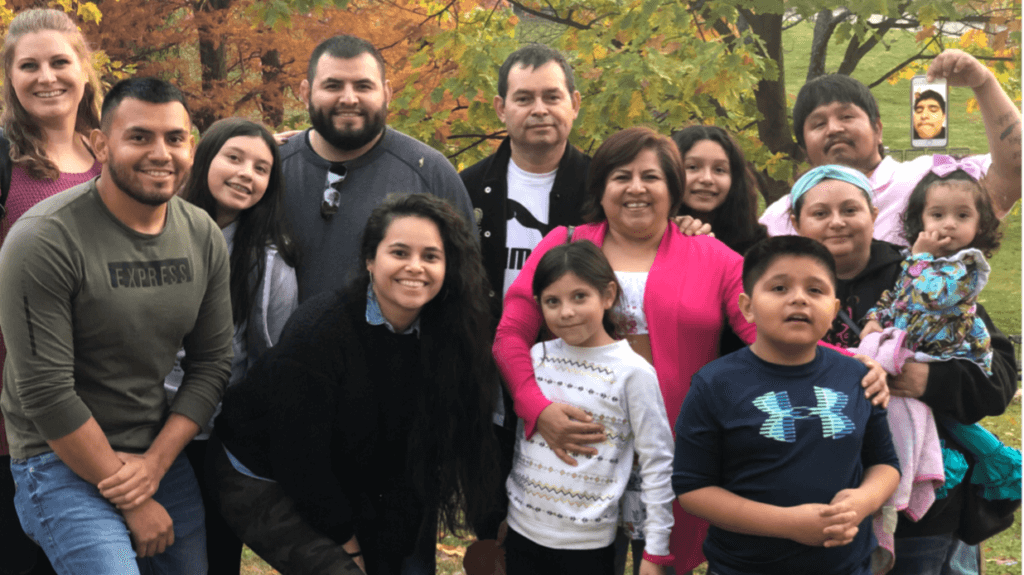 The Mendez’s had two jobs. From 7 a.m. until 3:30 p.m. they de-tasseld corn. They would head home to have something to eat, check on their kids and go to a second job picking strawberries and apples from 4:15 p.m. until 8 p.m. They knew they had to work much harder in order to send their kids to college.

With time their dream came true. Their kids found success in college, entrepreneurship and serving their country. Still they had to make many sacrifices in order to make ends meet and pay for college expenses beyond scholarships their children had earned. Money for books, transportation, and all that comes with school and supporting their childrens’ dreams. The Mendez’s did not want their kids to lack anything.

Today they are proud parents, joyful parents. They endured many difficulties, yet it was all worth it.

“My oldest daughter is married now, and she owns a small business along with her husband,” Martha humbly told me. “My second child, Carol, is a math teacher and was recognized in 2016 with the ‘William T. Kemper Excellence in Teaching Award’ and the ‘2017 Missouri Charter Public Schools Teacher of the Year award.'”

Both are a tremendous honor, and I also notice how Carol carries her parents’ legacy by helping others go to college. The Missouri award is in recognition of educators like Carol who work to ensure that inner-city students also have a path to college.

In an interview with the Central College (Pella) alumnae magazine, Carol said, “I could win 10 awards and not feel that I have lived up to the sacrifices of my parents.”

Their third child is an analyst for an insurance company and their youngest served in the Marines and is currently studying electronic engineering.

After all these years, things have changed for this hard-working couple and their four children. Their lives are easier since all kids are on their own now and they are now procuring for their parents. Martha told me they can enjoy small pleasures now, like going out to a restaurant and other outings.

Nowadays Martha and Miguel continue to work in agriculture, just not in the fields. Years of hard labor have taken a toll on her back, so she is unable to do the same work she did for so long.

I also asked about health care. She said they didn’t have insurance in the past, but thanks to Proteus, Inc., they were able to receive medical attention.

“My husband was diagnosed with diabetes 20 years ago, and there was no way we could afford his medical care and medicine,” she said. “We are so grateful with this great organization that has helped us so much.”

Through this program, patients are seen at mobile clinics, in-house clinics and on an individual basis by a Proteus licensed medical professional, including specialty providers, dentists and vision experts. Services are in their own language and patients pay a sliding fee. So, while they work, the employer provides health coverage, and the rest of the time they are covered by Proteus’ health program.

Today, Martha is a permanent resident and eligible to become a U.S. citizen. One of the reasons she has postponed her application is that she feels her English is not up to par and she fears that may prevent her from passing the oral test that is part of the process. They worked all of the time, cared for their children and had no time to attend school to improve their English.

According to the National Center for Farmworker Health, there are more than 3 million migrant and seasonal farm workers in the United States. Seventy-two percent are foreign born and 68% were born in Mexico. The average individual income ranges from $12,500 to $14,999 and the average total family income ranges from $17,500 to $19,999, making their incomes below the U.S. government’s poverty guidelines.

Latino migrant workers are joined by other immigrants as well. These are the heroes bringing food to our tables, paying taxes, contributing to the economy and raising their kids with the hope of giving them a better future.

These are the heroes that can’t and don’t stop working due to the pandemic. They can’t stop because we rely on them, on their hard work, on their tired backs, their hands full of calluses and their brown skin from working so many hours under the hot sun.

These are the heroes that we can no longer ignore. They are not invisible. They spend their entire lives in the fields so my family and your family can enjoy fresh fruits and vegetables.

Where they were once unwelcome, they have always fed us.

The fields are also watered by the beads of their sweat. We should honor them, admire their strong spirits, humble and hard work and beautiful and tender hearts.