The day has finally come, Iowa. After more than a year of campaigning here, Democratic presidential candidates and the public likely will know tonight who wins the Iowa caucuses.

But before we take you to the precincts this evening, the Starting Line team compiled a snapshot of goings-on in and around Des Moines as volunteers head off to canvass neighborhoods one last time and media outlets from around the world set up at coffee shops throughout the city.

Tom Steyer arrived to his campaign office in Des Moines around 9 a.m. this morning to rally his volunteers and give one final message to the assembled media. Cramming into a small meeting room with maybe two dozen reporters, volunteers and students visiting Iowa, Steyer impressed upon his supporters the seriousness of the day.

“What we are trying to do is to take back the government from corporations and a very corrupt president and party that have bought it, and we’re trying to save the planet,” Steyer said. “When we’re out today, there’s a total reason to be here. It isn’t about hoopla. This is about actually accomplishing something as a people, and this is the first day to do that.” 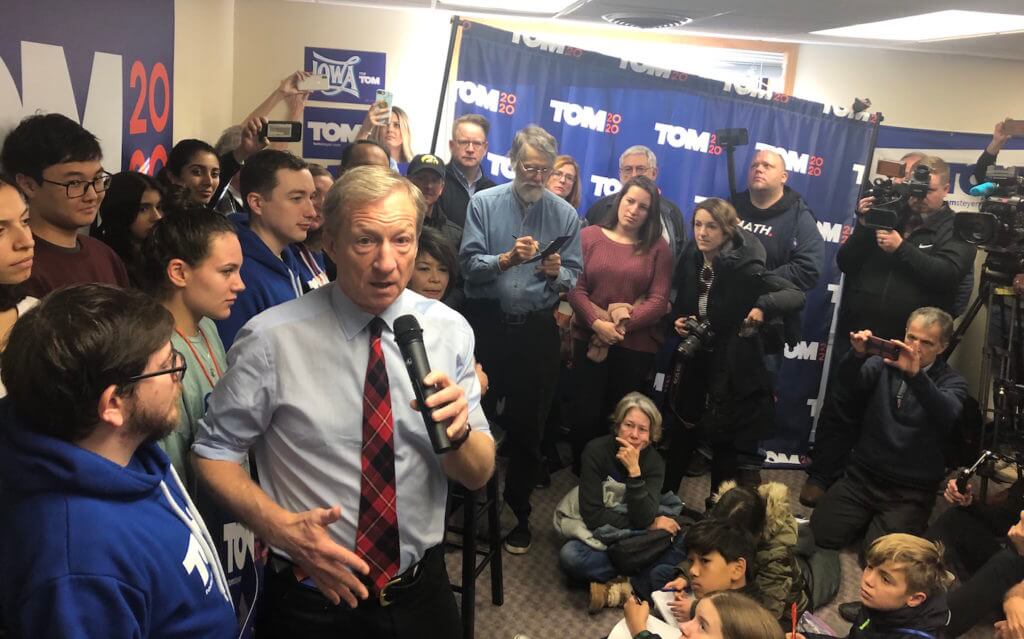 Campaign staff, meanwhile, filled the front offices to distribute walk packets and phone lists to volunteers as they came in the door. The field organizers described themselves as “all Steyered up.”

Early morning at Pete Buttigieg’s Beaverdale field office, a slate of students from across the country set out beginning at 8 a.m. to canvass one last time. 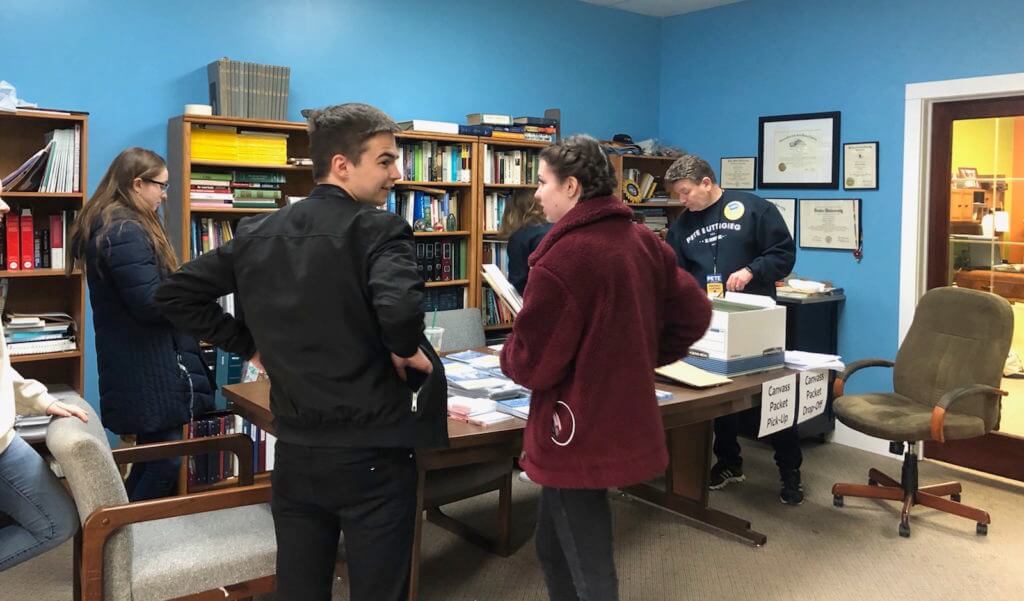 “I have to text my professor and tell him I won’t be in class,” said a student from UNC-Chapel Hill.

Caroline Fenyo, a student from George Washington University and a national campus volunteer lead for Buttigieg, said she had to email hers, too. None had school off today.

“I’m just excited to have conversations with Iowans to talk about Pete, and just kind of spread the word, and try to get people excited about caucus tonight,” Fenyo said.

She had never canvassed in the state before, but planned to knock doors all day, help people “get hyped” at the precincts and then go to Buttigieg’s watch party tonight at Drake’s Bell Center.

In West Des Moines, two or three people at a time trickled into the field office for Sen. Bernie Sanders.

From there, they were sent to staging locations including Urbandale, Waukee and Clive for some last-minute door-knocking.

They coordinated driving people to caucus locations tonight and other organizing efforts going on today. They handed out more t-shirts and buttons, though the supply for both is running low. 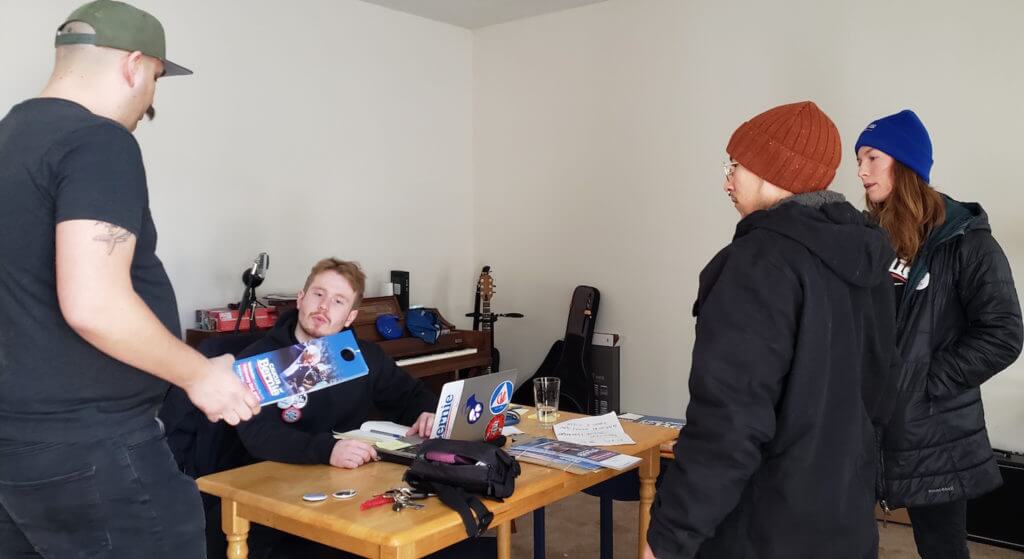 In Urbandale, at the home of Jeremiah LeBresh, packets with door-hangers and information cards covered the dining table, and volunteers in Sanders shirts under their coats waited for the organizer to send them out into the neighborhood.

This last push is to continue convincing Iowans to caucus for Sanders, but it’s also about informing caucus-goers about the logistics of tonight.

One of the biggest concerns, organizers and volunteers said, are potential location changes due to large turnout. Their priority is making sure Sanders supporters are aware of exactly where they need to be tonight. 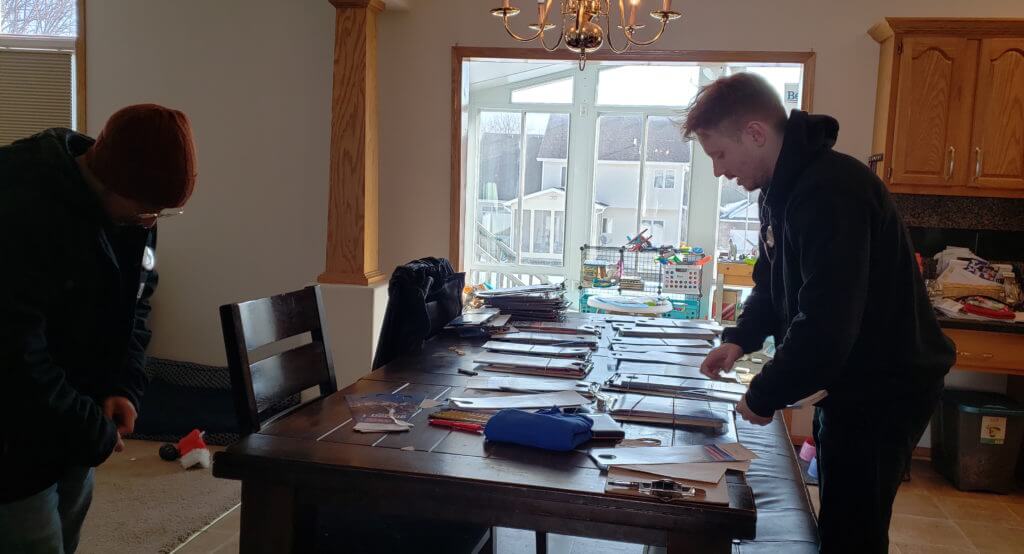 To check the locations, volunteers enter a voter’s address into iwillvote.com and double-check with the address posted on the door-hangers the volunteers have as part of their packets.

Around 10 a.m. the Urbandale staging location was pretty quiet, but a handful of volunteers from Oklahoma and Texas were still there to find out which precincts they would visit before the caucuses tonight. The organizer said more people will come through as the day goes on.

John and Abigail Bessler, Amy Klobuchar’s husband and daughter, talked with media and some Klobuchar supporters ahead of a canvass launch Monday morning in Des Moines.

Sen. Klobuchar is currently in Washington D.C. engaged in the ongoing impeachment trial, but John said he expects Amy to be back in Des Moines by the time caucusing starts at 7 p.m. His day ahead of caucus time is to push for high turnout.

“If people around the country get to know Amy, they realize she’s a good person to take on Donald Trump. And I think that’s what people are really looking for in this race, in the Democratic Primary, is someone who can beat Trump and the Iowa caucuses are just the first step in that process of shorting out who’s going to be the nominee for the Democratic party,” John Bessler said.

Abigail mingled with supporters, mentioning that soon, she’ll have to get back to work. Abigail and John have spent about as much time in the state campaigning for Klobuchar as the candidate herself.

Des Moines was riddled with media long before the sun came up when reporters started doing live shots and shows went on air from coffee shops and local restaurants.

Attendees started getting in their seats as early as 3:30 a.m. Buttigieg stopped by to join the broadcast for a while, and Sen. Amy Klobuchar appeared remotely from Washington, D.C.

CBS “This Morning” also broadcast live from the Drake Diner by Drake University’s campus. Ed O’Keefe covered a number of topics surrounding the caucuses from inside the diner, including criticisms of Iowa’s place in the primary process. 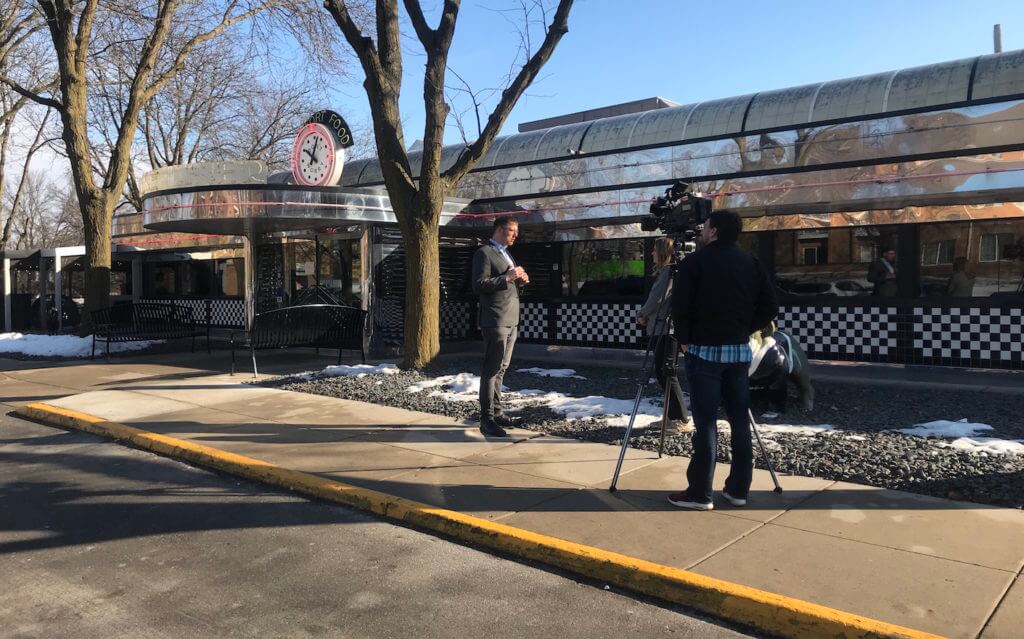 Buttigieg also stopped by Java Joe’s for an interview and Klobuchar again appeared remotely. Andrew Yang popped in for a quick chat, as did Dr. Jill Biden on behalf of her husband.

These were the bigger media events happening downtown, or near it, but there are cameras and production trucks set up everywhere around the city.

If you go out in public, or enter anywhere that sells coffee, you will end up in a b-roll shot or get asked to do interviews.

Kept out of Iowa again due to the impeachment trial of President Donald Trump, Sen. Elizabeth Warren held a tele-town hall 9 a.m. Monday morning to talk with Iowans ahead of tonight’s caucuses.

Warren told the caucus-goers she was thankful for her experiences in the state over the last year (she officially launched her campaign last February). Warren said she’s hosted about “a zillion” town halls in Iowa and answered “a triple zillion” questions.

Among those on the phone call was a Warren precinct captain named Molly, who lives in Madrid, Iowa.

“I have been out canvassing the last couple of weekends and the thing I heard over and over again from people who are undecided and even those who have made up their mind is the most important thing is nominating someone who can beat Donald Trump in November,” Emily said.

Sanders and Klobuchar also are in D.C. today, but all three are expected back in Iowa tonight for their respective caucus night parties.