With the last-minute spiking of the planned Des Moines Register poll on Saturday evening, the Iowa Caucus got what it clearly needed so much more of: drama.

Unfortunately for the political world, it also left us in the same position we were yesterday, with no one having a certain sense of who’s going to win.

But we can at least glean some information from what we saw on the campaign trail. Specifically, the turnout and vibe from each of the top four candidates’ stops in Cedar Rapids, all just hours apart on Saturday.

And if you want to go off of that, it largely confirmed what many had thought the Register poll would show: Sen. Bernie Sanders has the late momentum, turning out crowds that swamp his competition.

But all four candidates’ events took on the tone of electric rallies, and it’s clear that each of the leading contenders has a motivated base ready to turn out and organize their corners on caucus night. The question is just whose is the largest, and who can win over the most caucus-goers during realignment.

Complicating all the analysis, however, was the large amount of caucus tourists who have descended upon the state in droves and packed events. The campaigns themselves have also gotten rather creative with their crowd size numbers, reporting out totals that didn’t seem to match the eyeball test of those that were there.

Event turnouts aren’t the only thing that matter, obviously, and most of the real work this weekend was done by campaign staff and volunteers out on the doors. Still, you’d rather have the most packed events of the field than not.

With that in mind, here’s how Saturday played out.

The day in Iowa’s second-largest city started a little after noon with Sen. Elizabeth Warren’s rally at Coe College. She was joined by Massachusetts Congresswoman Ayanna Pressley, who introduced the senator to the crowd gathered on the gymnasium floor.

When Warren took the stage, she warned the crowd she would not be able to pose for pictures in her famous “selfie” line because she was “locked down in Washington” all week for the impeachment trial. Instead, her golden retriever Bailey would meet with supporters so she could run off to more events. 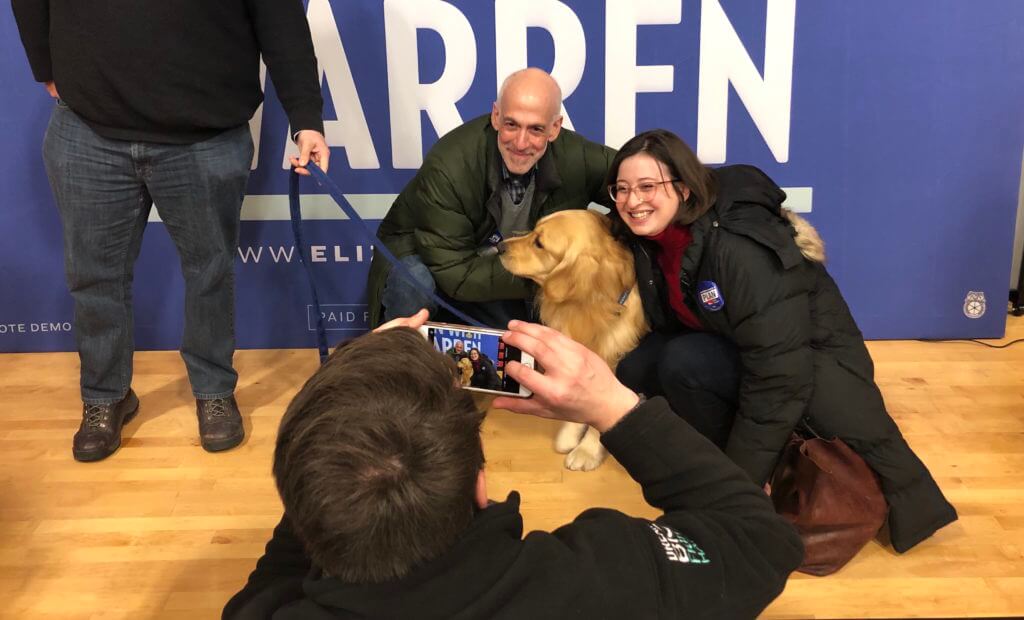 With the same fervor she applied to running from the back of the gymnasium to the podium on the other end, Warren zipped through her standard stump speech before taking nine questions from the crowd.

The campaign estimated her Cedar Rapids crowd at 700, though in person it appeared smaller.

Per the Warren campaign, more than 700 people were here at Kohawk Arena on the campus of Coe College in Cedar Rapids. pic.twitter.com/24smCNOT5V

When a woman in the audience told Warren that as a mother of young boys she was concerned about the direction of the country, from climate change to foreign wars, Warren challenged them to look at the underlying issues in America that led to Trump’s election.

“Look, things were broken long before Donald Trump came along,” Warren said. “A country that elects a man like Donald Trump has serious problems. But Donald Trump has taken these problems to new depths, and that means we now see how badly broken our government is and how much it is working for everyone else.”

Matt Miller, a security guard working while Warren spoke, stood on a small concourse above the gymnasium floor, taking a few minutes to lean against the railing and listen.

Miller, of Cedar Rapids, has never caucused before and wasn’t sure he will this year, but if he did, he’d likely support Warren or Sen. Bernie Sanders.

“It’s going to be a lot of work, but she was talking about the (2-cent) wealth tax, I agree with that,” Miller said. “The rich should still pay their taxes as well. If we have to, it should be even across the board.”

By the time Warren was wrapping up, Joe Biden’s event got going with the first of many surrogate speakers and allies.

The location was an interesting choice, held in an old, rather small school gymnasium the size of a narrow basketball court. The attendees all fit, just barely, which the campaign pegged at over 400.

Lot of people crammed in for @JoeBiden’s event in Cedar Rapids pic.twitter.com/1fiqSdQvXo

The event was one of the most energetic we’ve seen for a Biden appearance, coming off like a serious pre-election rally. Chants of “Joe, Joe, Joe!” broke out many times beforehand and attendees cheered along to the song playlist.

All of Biden’s buddies, old and new, were on hand. Firefighters president Harold Schaitberger threw their signature gold and black t-shirts into the audience, instructing attendees he wanted to see them wearing them on caucus night.

In fact, there were so many old friends of Biden there that it took him nearly 10 minutes to get started, because he kept spotting in them crowd, from old D.C. staffers to some important Massachusetts elected official. Both U.S. senators from Delaware were on hand, as well, with Sen. Tom Carper working the room one attendee at a time beforehand.

“We know Joe, we know who he is, we know his values, and we need to make sure he is on top of that ticket,” Congresswoman Abby Finkenauer said in her speech. “There is more value in bringing people together in unity than driving fear and division … Show up Monday night. Bring your friends, bring your neighbors and show up strong for Joe Biden.”

Biden seemed particularly happy and enthused, earning multiple standing ovations from the crowd as he bemoaned the poor character of President Trump and explained how he’d beat him.

“I’m told by my competitors, well, he just doesn’t understand this new Republican Party,” Biden said. “I understand it better than anybody. I’ve been the object of their affection.”

Attendees at this event were essentially treated to a candidate two-fer. Former Secretary of State John Kerry, who won the Iowa Caucus in a comeback in 2004, sounded like he was reliving those glory days with a 25-minute speech and a “No Surrender” walk-up music, the campaign song from that run 16 years ago. 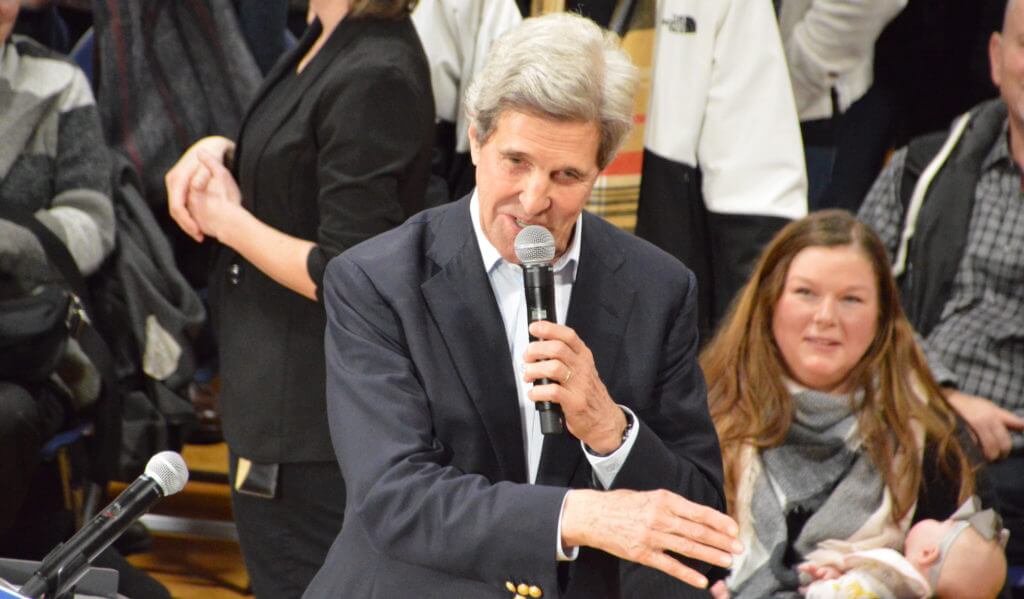 Also, Santa Claus endorsed Biden. Or at least a white-bearded man in a red outfit, someone that Biden had apparently met before and had nicknamed “Santa Claus,” stood up in the audience at the start of his speech and praised the former vice president.

At a well-lit hotel ballroom on the south end of Cedar Rapids, Pete Buttigieg addressed an important Iowa topic he had yet to comment on: Casey’s breakfast pizza.

“I relented and finally took the plunge and introduced myself to Casey’s breakfast pizza and actually I liked it,” Buttigieg said on stage.

The crowd responded in ravenous cheers and applause.

The rest of Buttigieg’s stump diverged little from his closing argument he’s been making the past month. He took only a handful of questions on mostly serious policy topics like mental health and gun violence before working the crowd on his way out.

The crowd looked to number somewhere around 600 to 700 (our estimate, not the campaign’s). 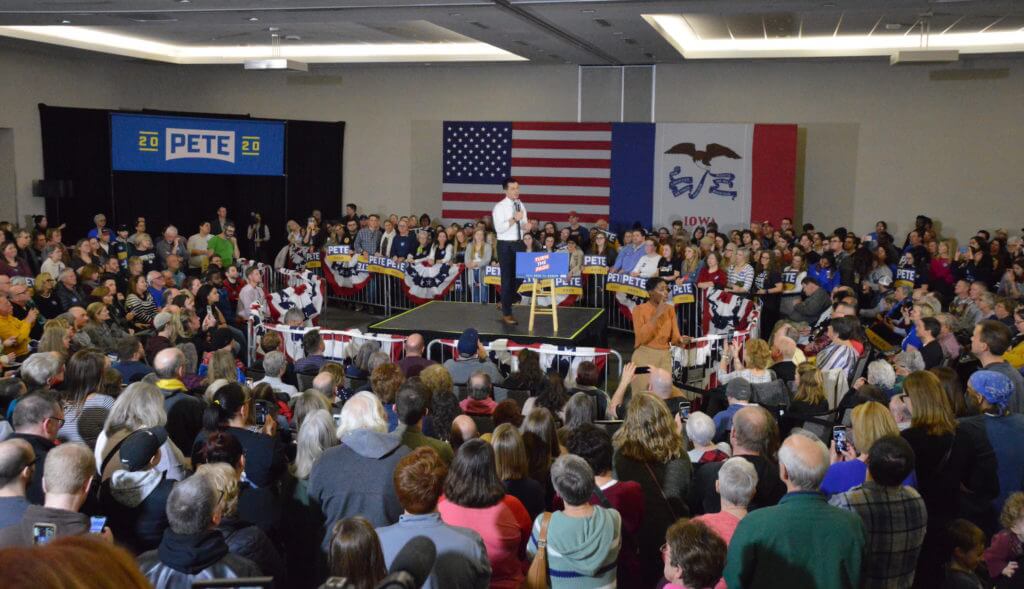 Most noteworthy from Buttigieg’s event was its vibe of a final-stretch rally with extremely motivated and excited supporters.

The final weekend’s caucus events have been much more like real closing rallies, even as many Iowans still seem open to still changing their minds. Lots of chants breaking out at @PeteButtigieg’s event in Cedar Rapids pic.twitter.com/1VgCJWxkhM

Buttigieg’s Iowa campaign has established a very strong ground game since the summer, and their caucus night precinct teams could be some of the best-trained of the field. A large section of precinct captains and volunteers cheered loudly and waved signs from the back half of Buttigieg’s Cedar Rapids event.

Other attendees there saw the same characteristics of the well-spoken and measured persona of Buttigieg that’s drawn so many to him already.

“His presence in the debates, his calm demeanor even when he’s attacked,” said Aaron Boots, 38, of Marion, of why he liked the former mayor. “He responds firmly but calmly and that’s what I think you need to beat Trump in a debate and beat him in an election.”

When Sen. Bernie Sanders took the stage on Saturday night to a crowd he said was 3,000 strong (in this case, it certainly looked like it), campaign signs waved in the air from the front of the crowd to the back, where portions of the upper bowl were filled in by people who couldn’t squeeze in closer. 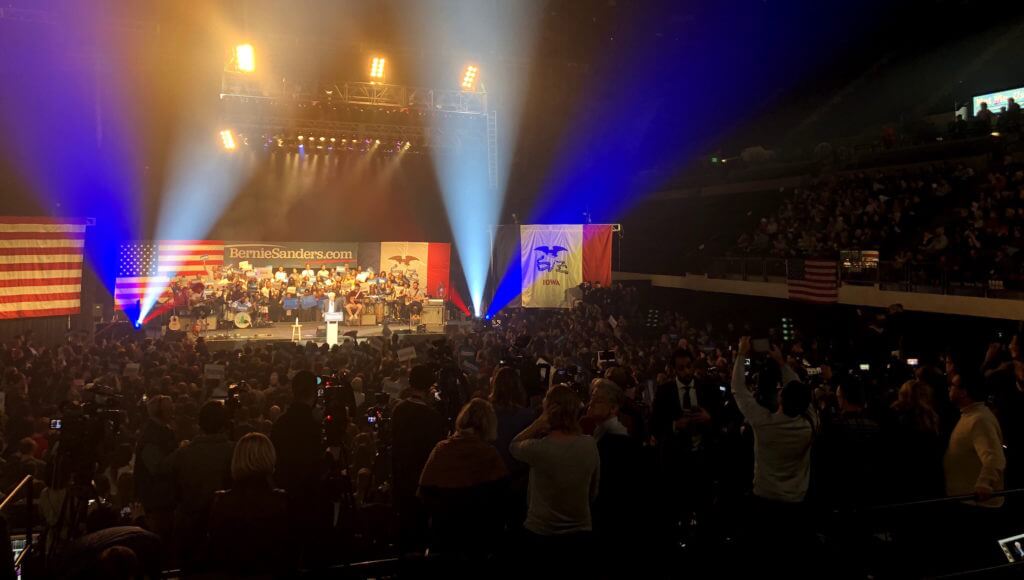 Sanders took the microphone before Vampire Weekend, the indie-rock band headlining his event, but after a long list of surrogates eager to tell the crowd why they should caucus for the senator on Monday.

Filmmaker Michael Moore led a chant of “love and compassion” with the fans, a crowd as eager to cheer their message of economic inclusion as they were to boo the Democratic National Committee.

He even brought out the “loaves and fishes” story from the Bible as an analogy of Sanders’ belief in “sharing the wealth.”

“That’s called redistribution. It’s called democracy, it’s called freedom,” Moore said, referring to “JC” and his miracle. “If you need to explain that to someone in your family, explain it that way.”

After Ohio politician Nina Turner, a national co-chair of Sanders’ campaign, and Linn County Supervisor Stacey Walker, took their turns at the mic, Walker then had the chance to pose questions to U.S. Reps. Pramila Jayapal, Ilhan Omar and Mark Polan.

Cornel West, a political activist and author, and Jane Sanders, were the last to speak before the Vermont senator bounded on stage, buoyed by a crowd of adoring fans.

Sanders’ crowd at U.S. Cellular Arena in downtown Cedar Rapids wasn’t just the largest event for presidential candidates on Saturday, it was the biggest of any candidate’s for the entire caucus cycle. With a mix of out-of-state fans, concert-goers and voting Iowans, the Sanders campaign put together an event with a true rally feel, complete with bright lights and musical numbers.

Take away the thousands of people and large stage, and Sanders could just have easily been in a grade school gymnasium or local fairgrounds, delivering his tried-and-true remarks on “Medicare for All,” the “climate crisis,” a $15/hour minimum wage, tuition-free college, legalizing marijuana and granting U.S. citizenship to Dreamers.

But he did make a direct plea to caucus-goers, calling on Iowans of all ages to make history.

“Tonight I am here to ask you, very humbly, for your support on caucus night,” Sanders said, as cheers of “Bernie, Bernie, Bernie!” erupted throughout the arena.

2 Comments on "Who Needs Polls? 4 Candidiates, 1 City – What We Learned"