Sen. Cory Booker set off on his four-day bus tour of Iowa yesterday morning, loading into his newly-wrapped ride that was adorned with the names of voters from around the country who donated to his campaign. Now off the debate stage, Booker is devoting even more time to stumping in Iowa in the hopes of building up surprise momentum at the end.

This tour is an open-press, all-on-the-record trip, where reporters are on the bus with Booker for the entire time.

Starting Line is on board for the first three days of the tour, and we’ll provide dispatches from each leg of the trip about all the little colorful moments and Booker anecdotes, along with a big-picture story at the end of it.

Anyone who has spent time around Booker knows his outsized personality, fondness for telling bad jokes and love of vegan snacks. We’ll take special note to catalogue those jokes and stories for the benefit of our readers and America. 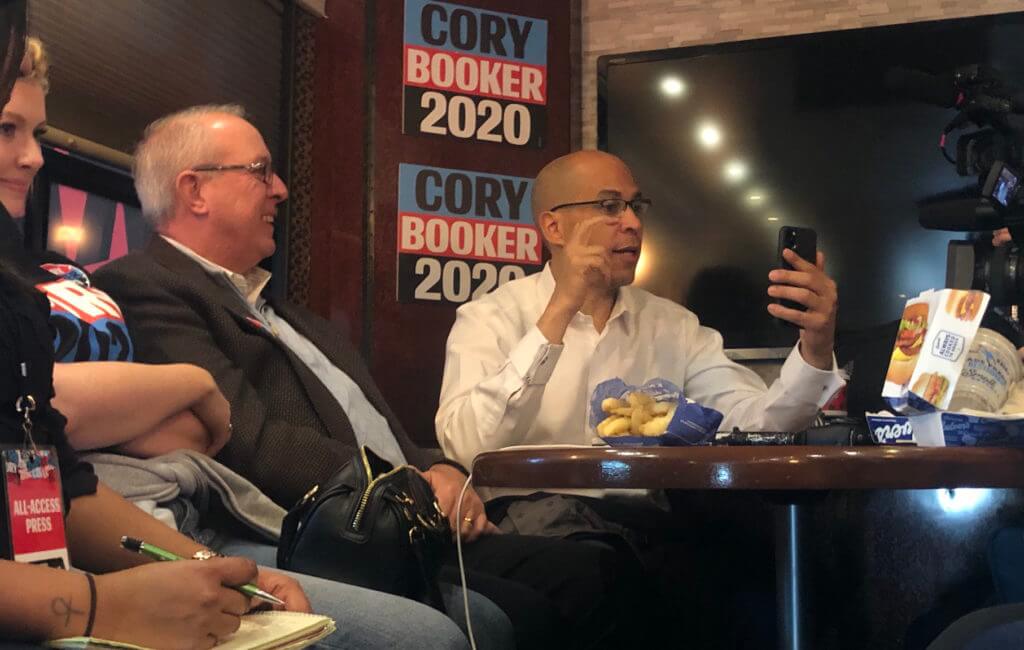 N/A. He told the bus that his vegan diet on the campaign trail swings from binges to austerity. Right now, he’s in a phase of austerity, but when he gets to Los Angeles next week to spend Christmas with his mother, as well as his girlfriend, Rosario Dawson, he’ll be in binge mode—he said there are too many good vegan restaurants there to not overeat.

The event was at the Adel Family Fun Center, which is owned by Bryce Smith, the Dallas County Democrats chair, who announced his endorsement for Booker that day. Given that the center is a bowling alley, Booker said he’d “spare his campaign from telling too many dad jokes,” before beginning to speak in front of the lanes. When he tried his hand at a frame, Booker bowled a spare.

At the end of the event, Booker was asked a question from a former Marine who happened to be wearing a tight, short-sleeved shirt. Before answering the man’s question, Booker asked him if he had “registered those guns.” 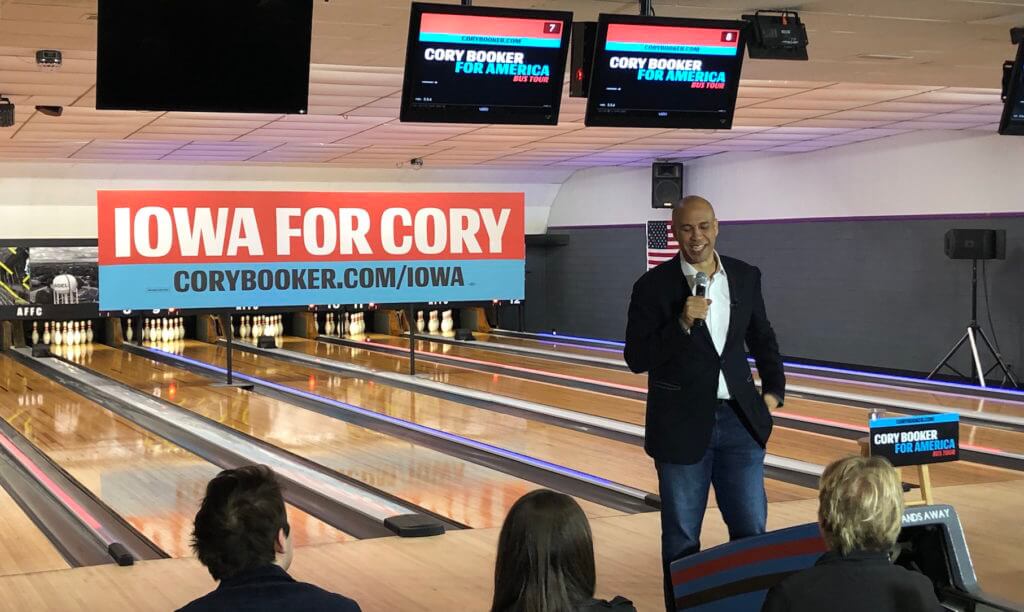 After piling on the bus and settling into its dark leather seats, Senator Booker switched on the TV, which happened to be turned to Fox News. Booker then mentioned that about a decade ago, he had shabbat dinner with Tucker Carlson.

“It’s hard to hate someone you’ve broken bread with,” he said.

Speaking of food, the ride before the Adel Family Fun Center featured a lot of vegan talk.

Booker’s favorite vegan spot in Des Moines is Dirt Burger—he said he doesn’t quite have a favorite burger, but won’t eat jalapeños or pickles on his sandwich. The candidate likes Dirt Burger because they don’t try to be meat—they’re truly vegetable patties.

He mentioned that his new year’s resolution for 2020 is to be more aware of his fashion choices—he already buys vegan shoes, but still wears leather sometimes. But this year, he’ll try not to buy from fast-fashion brands and use more sustainably-sourced clothes.

A banana and a venti Starbucks coffee, while everyone else ate Culver’s. Again, the Senator sticking to his food austerity.

While Booker vigorously encouraged the bus to sing Christmas carols, he stopped everyone and asked if the bus knew the story of Rudolph and his wife, Helga. He described a scene where Helga was at the window of the reindeer’s home and noticed it was raining outside. Helga asked Rudolph if he had seen the rain, and Rudolph replied, in a Russian accent: “Rudolph, the Red, knows rain, dear.”

After bowling, Booker was joined by State Representative Kenan Judge and his daughter Madeline, who is home for Christmas from Ireland, where she sings for a living. Naturally, the focus of this leg was on music. 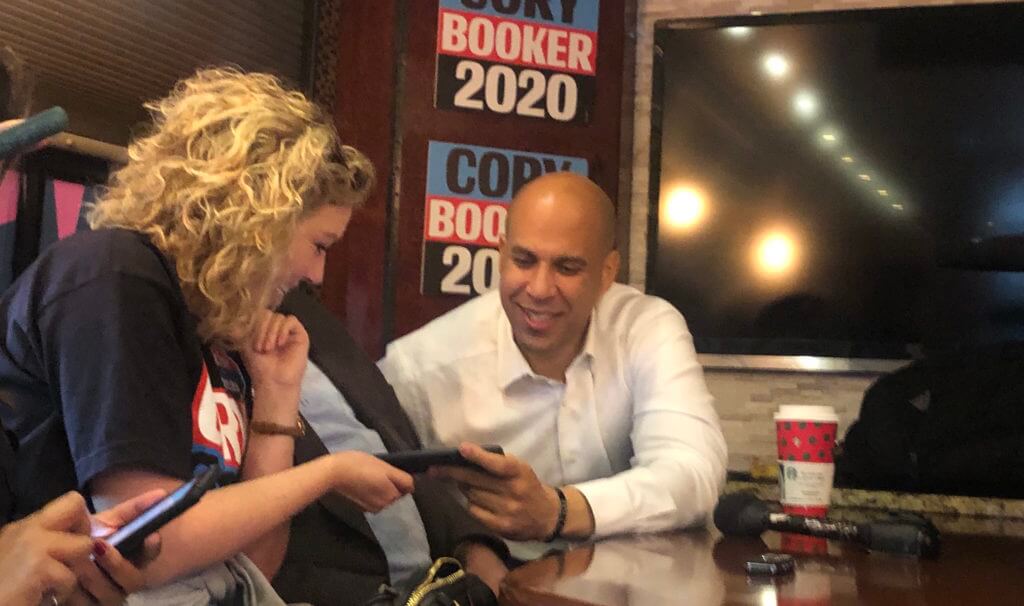 The candidate talked about his Spotify most played list. His number one music genre was Gospel, then Rock (he named dropped Jon Bon Jovi several times during the entirety of the day, at one point saying he needed to bring the singer out to Iowa). Booker said his most played artist was Chance the Rapper, but he’s also a huge fan of Showtunes. His most played musicals are Hamilton, Dear Evan Hansen and the Greatest Showman.

He then talked about how in the Senate, the best singers are New Jersey Sen. Bob Menendez, who “has an amazing baritone,” and Mississippi Sen. Roger Wicker, who “moves everyone with Christmas carols.”

“There’s all these sweet moments in the Senate, when partisanship melts.”

Another time when the candidate was moved by music with his friends was when he was in Bethlehem, Israel with New York Sen. Kirsten Gillibrand and former North Dakota Sen. Heidi Heitkamp. The group was in a sort of grotto with “great acoustics” when Heitkamp began singing “Away In The Manger.”

Booker went on Instagram live during the second leg, and also FaceTimed Rosario Dawson, beginning the call by saying, “Hun, there are a lot of people around me.”

He then told Dawson that he had gone bowling at his previous event.

“Guess how I did?” Booker asked. “We have not established who has bowling supremacy in this relationship.”

After their talk, Booker spun the questions around to the media. He asked everyone to individually say what their favorite childhood Christmas gift was, and what our first concert was—sans parental guidance.

During the process, we learned that his first concert was Lionel Richie and he doesn’t have a favorite Spice Girl—he was more of a Josie and the Pussycats fan—and not because Dawson was a member of the group. 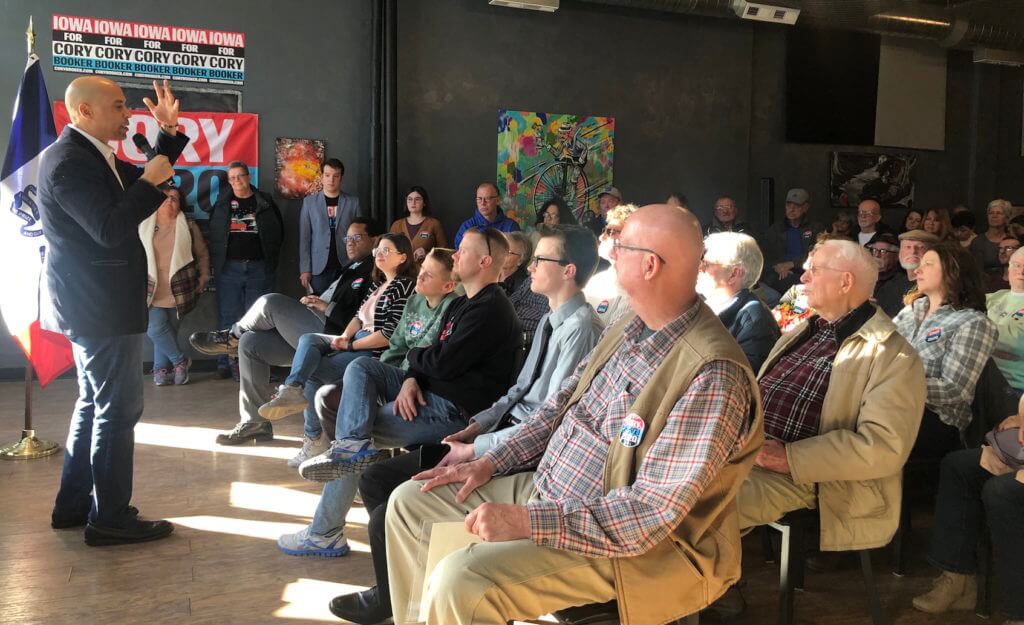 Booker had a bag of fruit. He ate a container of watermelon, an apple, two bananas, some cherry tomatoes and some baby carrots. Then, when the rest of the bus stopped for Mexican food at La Juanita in Sioux City, the Senator stayed on the bus and drank water and ate a bag of mini pistachios.

Because we had a longer drive, Booker engaged in several of his famed stories on the bus. In one of the stories, he describes driving through a New Jersey McDonald’s drive-thru for two large french fries after a long day as the Newark Mayor. The candidate then saw a homeless man, who asked for food and socks. During the story, he joked that in his Bible, there is an instance where Jesus said that if you have two orders of french fries, it’s necessary to give one away. The candidate added that Christ said this at the “Sermon on the McMount.”

We began the longest leg of the road trip talking about Booker’s hair and shaving habits. On the trail, the candidate shaves both his head and facial hair every other day. On no-shave days, like today, he gets a lot more sleep. When he isn’t campaigning, Booker will go much longer without shaving. Booker’s skincare routine was also mentioned.

We also found out that former Vice President Joe Biden was a good wingman—at one of the debates he took Rosario Dawson to the side and had a lengthy conversation with her about how great Booker was. The Senator said it helped.

We then talked a little bit about the upcoming holiday—Festivus, and tried to make the candidate air his grievances with his competitors.

“I think we need a presidential primary Festivus,” he said.

Booker kept it very respectful but did say that Rand Paul airs his grievances in the Senate every year and in the past said that Booker doesn’t mention him enough on Twitter. It was also discovered that the New York Times, “The Daily,” and NPR’s “Up First,” are his favorite podcasts.

In between entertaining anecdotes, conversation became a bit more substantive. The Senator told a number of stories, talked about getting money out of politics, what will happen to the Democratic Party after the dust settles from the primary race and an urgency for justice across the nation.

And within a lengthy story describing Booker’s potential recruitment to a number of schools to play football, it was discovered that the candidate was called up by former President Gerald Ford to play at Michigan.

Discussion with Press: Very little discussion, most bus riders were on their phones. After a long day, the candidate looked at his device and seemed pleased with the numbers.