It was an hour and a half into Joe Biden’s event in Knoxville, Iowa, and the former vice president wasn’t ready to leave.

Taking his third question after his staff called for a “last question,” Biden walked into the crowd to an older gentleman emphatically raising his hand. The man choked up as he told the candidate about his grandchild being afraid of school shootings, and Biden reached out and held his hand as the man struggled to ask about gun violence.

“We gotta be able to figure out why we’re building schools that have to have a buttress so a shooter can’t get a clean line of sight. That’s a country with a sick soul. There’s something wrong,” Biden said, before talking about beating the NRA on the assault rifle ban.

It was a moment seen often in Biden’s smaller gatherings, though the kind national audiences may not realize are key to his continuing appeal if they only follow his candidacy through Twitter and national news articles.

At Biden’s Knoxville (population: 7,300) event, tables and chairs were set up to surround Biden in a square in the middle of a high school commons, letting him roam to all parts of the crowd, getting him at most three rows of chairs from any individual attendee. He often singled out a person in the crowd as he was making a specific point, looking them in their eyes and gesturing his hands at them. 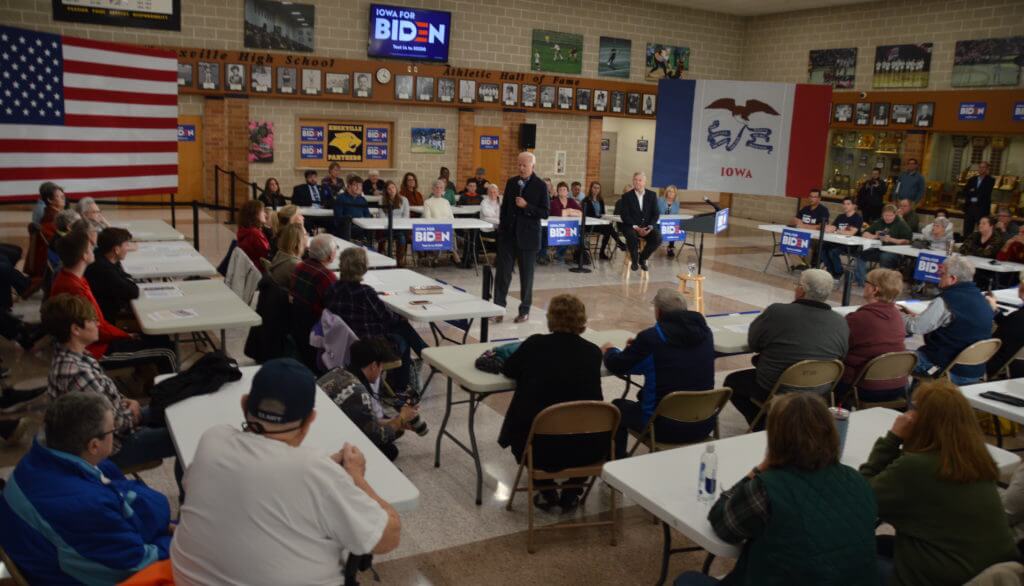 Biden noticed one man with two prosthetic legs and waded out to the back of the audience to talk to him up close about medical advances in prosthetics (something he brings up often at events when he can).

His detractors would point to Biden’s 100-person turnouts like this (not bad for a town like Knoxville, but certainly not as big as Pete Buttigieg, Elizabeth Warren and Bernie Sanders’ crowds) as an area of concern, but it’s also where his personal appeal works best. Yes, he can still ramble on a lot in his answers, but the emotional connection he makes up close with voters is real and compelling.

An added feature to this Biden Iowa trip on Saturday was the endorsement of Tom and Christie Vilsack. They opened both the Des Moines and Knoxville event for Biden, providing him with one of the most sought-after Iowa seals of approvals.

The endorsement wasn’t the biggest surprise, as, in many ways, the Vilsacks are your typical Biden voter: older, more moderate, have known the Bidens forever.

But they also represent the very deep, personal connection that Biden has formed with voters over the years and in his own personal story. As the Vilsacks reiterated several times, Biden has a special “trust” with voters that you can’t build up overnight.

Tom Vilsack told crowds of how his family went through their own personal tragedy of losing a 5-year-old granddaughter in recent years, and how Biden comforted Jess Vilsack when he saw him afterward.

“I want empathy in my president,” Tom Vilsack said.

Those characteristics are what have kept Biden in this race, more resilient than what some pundits have expected after his candidacy has taken plenty of hits this year. The polls in Iowa, however, are showing danger for the former vice president, and his national campaign has already downplayed expectations here.

Biden still needs something else to expand upon his loyal base in Iowa to finish strong on caucus night, so he’s increasingly turning to his other strength: his perceived electability.

That, also, is where the Vilsacks came in. 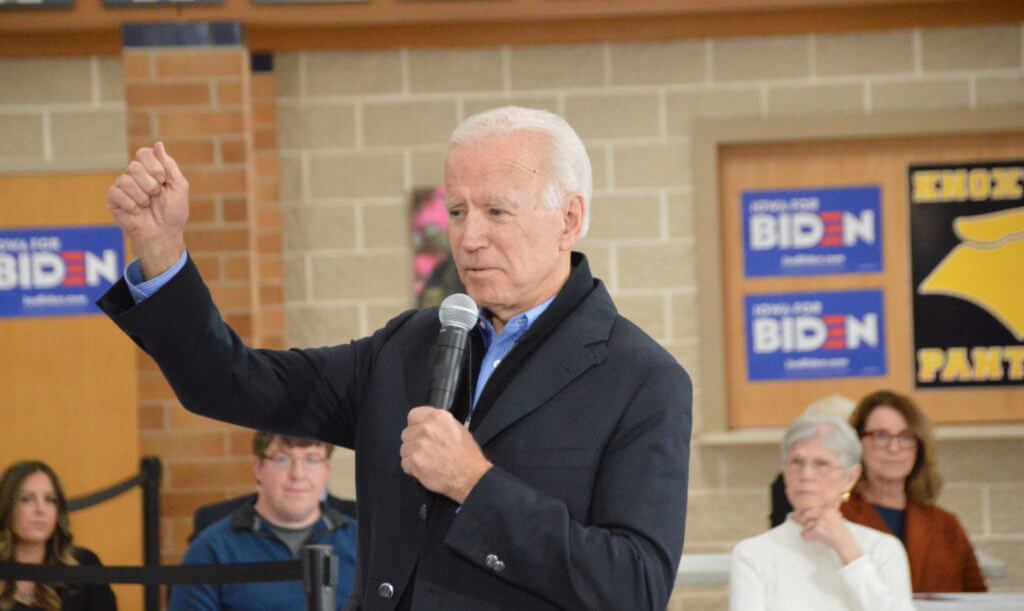 Christie Vilsack made easily the most explicit case we’ve seen in this election as to why Democrats and progressives should temper their dreams in favor of electoral reality.

That is the underlying case that Biden has been making all year as he points to polls showing him handily beating Donald Trump in states like Pennsylvania and Michigan. The idea that Biden appeals to the kind of white, blue-collar voter that abandoned Democrats for Trump has helped keep him on top of national polls, even as newer Democratic faces draw excitement. The downright desperation to defeat Trump is a very strong motivating factor this cycle.

Still, it’s quite the statement, to favor other voters’ opinions over your own, even if that is the implied calculation in electability arguments.

Some might find that refreshingly honest. Others may view it as a “Not me, them” slogan.

Beyond winning, though, the Vilsaks also made the point that Biden could actually get something done once in office.

“Joe Biden has offered a progressive and a realistic vision of how to move our country forward,” Tom Vilsack stated. “This, combined with the experience and the relationships he has … enable him to also implement that vision.”

He also pointed to Biden and Barack Obama’s past success in accomplishing those big goals, contrasting it with the rest of the field’s more left-leaning proposals.

“As vice president, he watched the impact of [the ACA] on 20 million Americans, expanding access for health care,” Tom Vilsack explained. “He knows that this is not about replacing the ACA or repealing the ACA, this is about perfecting it with the public option and expanding access to all Americans.”

To stay on track for the party’s nomination, though, Biden needs to avoid poor showings in the first two states, which could set off a cascade effect heading into later contests.

To that end, Biden this past week announced an eight-day, 18-county bus tour throughout Iowa from Nov. 30 to Dec. 7. Biden’s past trips throughout the year were mostly two or three-day affairs.

This new strategy is the sort of real barnstorming across Iowa that can actually move the needle with caucus-goers. Even if Biden’s long-winded comments on the campaign trail can sometimes cause him national grief, it’s his in-person visits that rekindle those highly-effective personal ties between voters and himself. And if the senators all get stuck in Washington, D.C., for the impeachment trial, he’ll face much less competition on the ground.

The Vilsacks will be some of the best surrogates on the Iowa campaign trail, even if their natural base of Iowa Democratic support largely overlaps with Biden’s loyal following.

Though Biden himself was quite optimistic this weekend, personally upping his expectations for the lead-off caucus state.

“I believe, particularly with the endorsement of the Vilsacks, that we’re going to win the caucus in February,” Biden said in Des Moines. “Next November, we are going to beat Donald Trump like a drum.”