During his first visit to Iowa since announcing his bid in the presidential race, Deval Patrick said his run is a little like the climate crisis: formidable but achievable.

The former Massachusetts Governor’s abrupt entrance into the crowded 2020 race has been met with some frustration from tired voters and Democratic competitors, but he remains undeterred. While touring damage from Cedar Rapids’ 2008 flooding on Monday and discussing climate solutions with state Sen. Rob Hogg, Patrick said he’s before been the underdog in a race for executive office.

“Climate change is so comprehensive and challenging … And maybe, that makes it hard for people to get their head around the nature of the challenge,” said Patrick. “But there isn’t a single problem we face that is beyond our capacity to care about and solve if we work together, if we build bridges. And that’s what my professional and public service career has been about, that’s what my life has been about, and that’s the contribution I want to bring as President of the United States.”

Before Patrick entered the race last Thursday, a Monmouth University poll released earlier this month found 74% of Democratic voters were satisfied with the current slate of candidates. The newest Democratic hopeful seemed interested in getting to know the state despite that as he talked about disaster mitigation in Czech Village’s Sykora Bakery and walked across the 16th Avenue Bridge.

“When I first ran for governor, which was the first thing I’d ever run for, I had I think one percent name recognition. I have to do the work, I have to earn it. I have to introduce myself, and I have to ask Iowans to do what I know, as a Midwesterner, we do: which is keep an open mind and an open heart,” said Patrick, who was born in Chicago, said. 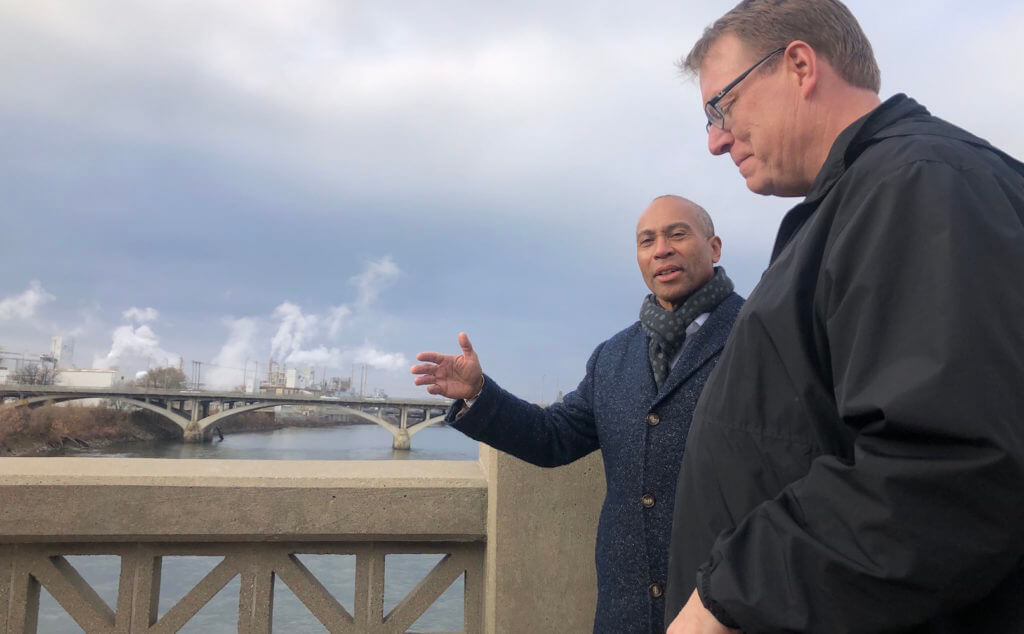 While introducing himself in the bakery, the candidate highlighted Massachusetts’ climate successes in the eight years he was governor. That included increasing clean energy in the state and pushing forward legislation like the Global Solutions Act, which set standards for reducing economy-wide greenhouse gas emissions.

“It was clear to me that he’s got some experience as a governor, that he was trying to relate our experience too. When you’ve been in an executive position like he has been, you build up a lot of experience,” Hogg said.

The event was part of Hogg’s series of “climate conversations” with the presidential candidates — where he’s before hosted 15 past and present 2020 bidders. After Monday’s tour with Patrick, the Senator said he thinks the field has a good grasp of the issue.

Later in the tour, when asked what would be the defining issue of his candidacy, Patrick said he’s fighting for solutions that last.

“We need climate solutions that last. We need a growth strategy that creates an economy that grows out to the middle and the marginalized … we need that to last. We need a whole host of reforms,” he said.

The candidate said Iowans should expect to see a comprehensive climate action plan soon, however.

“The seven feet of water that was inside this building (Cedar Rapids’ Sykora Bakery) is a graphic illustration of the challenge that is facing humankind. It’s not just here in Cedar Rapids, it’s not just back in coastal Massachusetts, it’s all over the world,” Patrick said. “I think that the United States has a leadership role and responsibility, joining other nations and making it both a policy matter, but also making it personal in responding to the threat to humankind.”