Zach Simonson, chair of the Wapello County Democrats, began his introduction Saturday afternoon of Tom Steyer by lamenting Americans’ lack of progress on fighting the effects of climate change.

“I get really excited when I think about the opportunity that we have with the climate crisis to really define our generation in a more meaningful way,” said Simonson, at the downtown Hotel Ottumwa. “Tom Steyer’s been a great partner in the fight on that issue.”

Steyer built his national political profile largely through his organizations NextGen Climate Action and Need to Impeach, launched in October 2017 with a petition of support for removing President Donald Trump from office. More than 8 million people have since signed on to the impeachment effort.

But for Steyer, a retired businessman from California, his political priorities extend far beyond the President.

Following the Iowa Democratic Party Liberty and Justice Celebration Friday night, Steyer hit the road Saturday and Sunday to meet voters in Southeast Iowa. He talked about “Need to Impeach” across stops in Knoxville, Ottumwa, Fairfield and West Burlington — often fielding questions from the audience on impeachment — but it was not the central issue of his stump speech.

“I know we have to stabilize the climate, I’ve said it’s my No. 1 priority,” said Steyer, at Peace Tree Brewing Company in Knoxville. “I would declare a state of emergency on day one. Rural America is a huge part of the solution. Rural America will be a partner in solving this crisis in a way that is profound and also profitable.”

Even as Steyer managed the investment firm that made him his fortune, he still was politically active, particularly on issues of climate. After he left his corporate job in 2012, Steyer went on to found NextGen Climate, now called NextGen America. The organization focuses on mobilizing young people to vote in order to “make progress on the issues facing our generation.”

In Ottumwa, Steyer fielded a question from state Rep. Mary Gaskill, D-Ottumwa, on how he would make farming communities part of his work as president to fight climate change.

“What I know is, we are going to have to sequester a lot of carbon in this world and we’re going to have to work specifically with farmers in rural communities to make sure that that happens in the real world,” Steyer said, noting his family raises grass-fed cattle, chicken and pigs in California. “What we’re going to do is go to those communities and not tell them what we’re going to do, but ask them the best way to do it, and make sure that the incentives are in place so that actually doing this is something that they get paid for and that they profit from.” 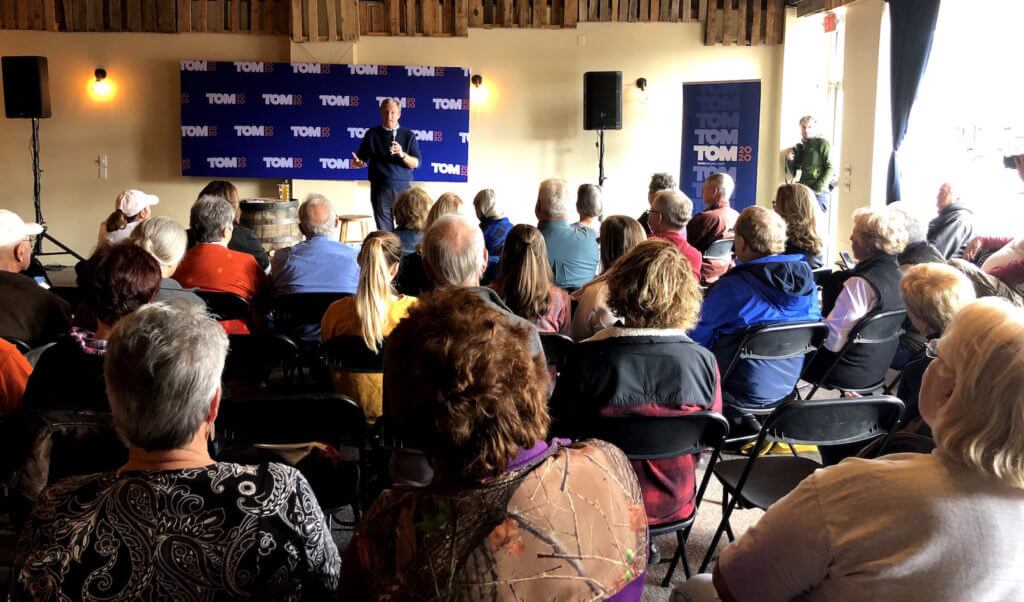 In rural Fairfield, in a barn at The Pony Farm, Leonard Milender said Steyer “hit all the buttons for me.”

But he questioned how Steyer could accomplish his priorities, such as health care for all Americans, 12-year term limits on members of Congress and rooting out corruption, without control of the House of Representatives and Senate.

In Knoxville, Linda Stelter, an undecided voter from nearby Pella, said she agreed with Steyer’s position on health care, that private insurance should remain available with the addition of a public option.

“I think he’s right about that,” said Stelter, a former photojournalist. “I worry about Elizabeth Warren and Bernie Sanders. I think everybody should have affordable care, absolutely, but I think it needs to be spelled out to show people you are not going to be paying more. If you don’t have all these premiums and deductibles and your taxes are a little bit higher, so be it. But, I think people should have a choice if they want to keep their employer-provided coverage.” 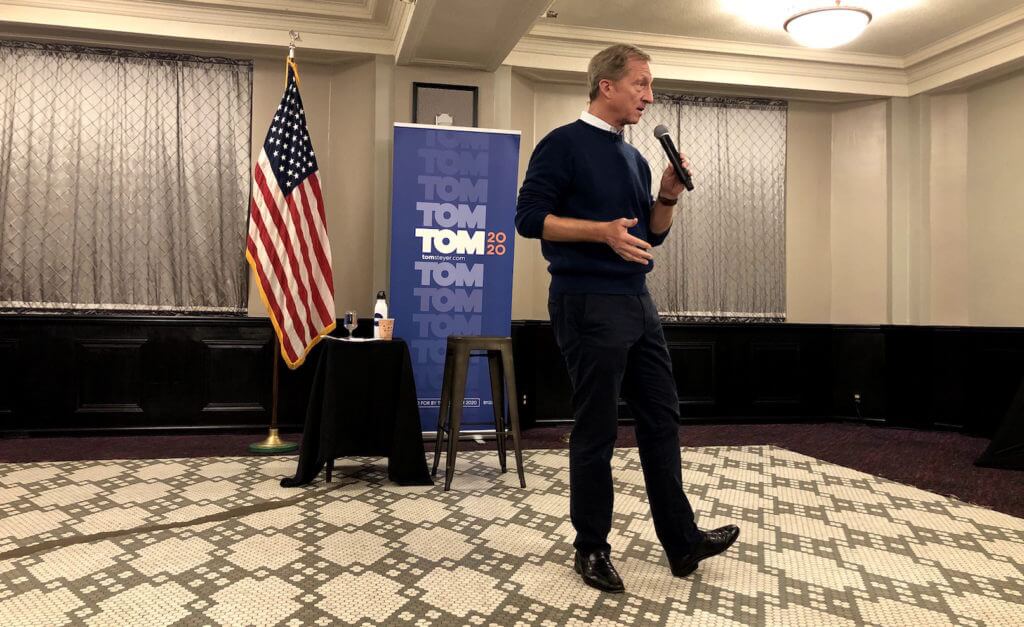 Steyer consistently drew crows of more than two dozen across his southeast Iowa stops, fielding 60-plus in Knoxville and West Burlington. His signature plaid tie was not on display, but a symbol he draws on his hand was visible from the audience. In a recent conversation with BuzzFeed News, Steyer said the cross-like image meant “to tell the truth no matter what the cost is.”

In Iowa, Steyer told voters why he decided to add his voice to an already crowded primary field. After watching the first debates, Steyer said he saw candidates arguing about policies he thought had no chance of being implemented until the “corporate stranglehold” on the federal government was broken.

“I’m running, basically, to try to restore what we all thought we had, which is government of, by and for the people.”