In half an hour, the caucus was over and the room had picked a nominee.

After pitches from representatives of three candidates, students at Grinnell College settled into their spots along the wall with only a handful to be won over. They moved from station to station before ultimately choosing a corner or a patch of wall to stand beside.

There was counting and realignment, and at the end, a winner.

The mock caucus held on Tuesday night in Grinnell wasn’t as loud, packed or time-consuming as a real caucus, but it accomplished the goal of showing first-time caucus-goers how it’s done.

In February, people across Iowa will repeat the process and gather in their precincts to stand in groups for their chosen candidate. For real. And for many young people at colleges and universities across the state, it will be their first time.

In order to familiarize them with the process, NextGen Iowa has hosted mock caucuses to give students a chance to practice before the big day in February.

The simulations started at the University of Iowa and Mt. Mercy University where Sen. Kamala Harris carried the rooms.

NextGen Iowa will host four more. One was at Grinnell on Tuesday, then Iowa State University on Wednesday. There will be two more at the University of Northern Iowa and Drake University in November.

“The best way to describe it is physically voting. With yourself. With your body,” Sarah Tylutki, the regional organizing director for NextGen, told students at Grinnell before she told them how it worked.

Student representatives or volunteers had an opportunity to pitch their chosen candidate in 15 seconds before caucusing began. Students for Sen. Elizabeth Warren, Mayor Pete Buttigieg and Sen. Cory Booker were the only ones who stepped forward.

And then the students were off, and three main groups quickly formed around Warren, Buttigieg and Sanders.

Margaret Silbaugh was with Warren from the start.

“I just think in general the ideas are pretty similar in nature and [Warren] has the best idea for how she wants to do it,” Silbaugh said. “She definitely has a planned-out method for what she wants to do.” 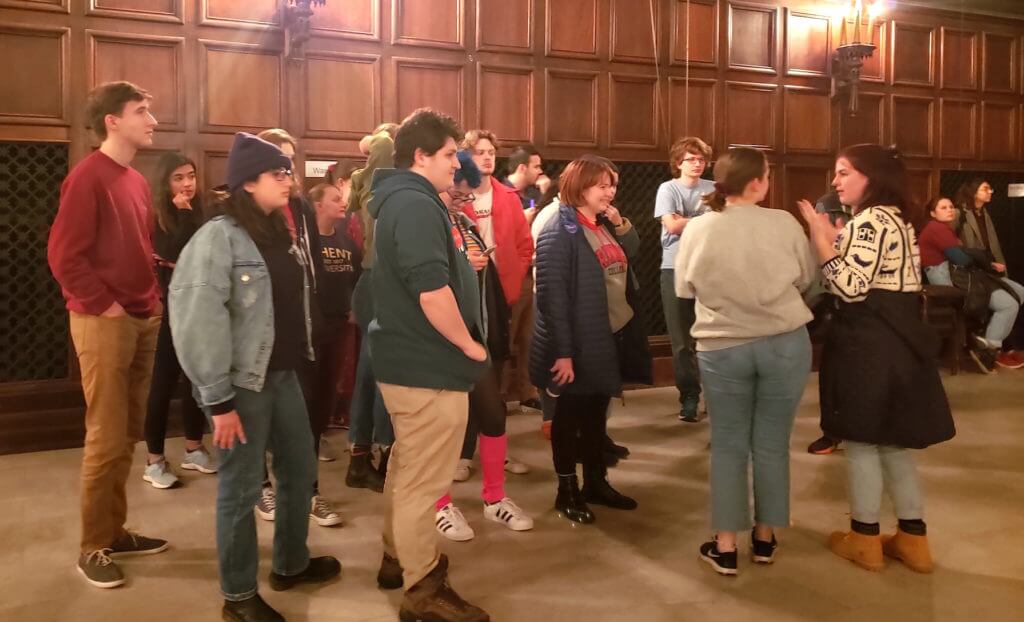 There were some undecided voters though, and just like a real caucus, people from the camps had a chance to convince them to their corner.

Madi Chandler fell into that boat. They were stuck between Warren and Buttigieg before ultimately settling in the Warren group.

Chandler said they leaned the most toward Warren and Harris as candidates based on personal research.

“I don’t foreseeably see Harris getting the nomination,” they said. “Warren, from the beginning, has always been steadfast about she wants to do. She’s firm in her beliefs and defends herself well.”

Even though they heard from Buttigieg supporters at the caucus, Chandler said they had misgivings about Buttigieg’s record on police brutality and his housing policies in South Bend.

There was one realignment when one supporter for Marianne Williamson and a few supporters for Cory Booker joined different groups. The threshold was set at 15 percent, which meant each candidate needed eight people to be viable.

“I haven’t done too much research, but I like that he’s stuck with his ideals since the beginning,” she said. “He’s been the same since he entered politics and that’s weird for politicians.”

Gonzalez said she will probably caucus in February, but she’d like to do more research before then because she likes what Warren says, too.

John Tobin, with Pete stickers and a yard sign, knew what he wanted, too.

“We like his message for generational change,” he said. “We were immediately drawn to him because of his intellect.”

Tobin said Buttigieg’s executive experience appealed to him and his plan to not eliminate private insurance seemed like it has the best chance of working.

By the end of the night, Warren carried the room with 19 people at her station. Buttigieg followed with 13 and Sanders came in third with 10.

Maia Battis-Wyatt was an undecided voter who ended up with Warren.

It wasn’t for any particular reason, they said, but they liked how inter-connected Warren’s plans are, and the organizer made good points that convinced them.

“It did seem that all the main candidates were for the same basic ideas,” Battis-Wyatt said.

On Tuesday, 60 to 65 students attended the mock caucus. From a show of hands, none of them had caucused before or knew how it worked.

By the end, the group said the process made sense to them and they’d all learned something, though they did ask questions about how precincts and stations would work in February.

When it was all over, Chandler said they would vote for whoever got the nomination, but they were sure about standing with Warren.

“I pick up on an underlying anger from [Sanders and Warren], and [Warren] harnesses her anger better,” Chandler said. “She keeps her charisma with a fire behind her.”