As an incumbent Republican running in a swing state in the same year an unpopular president is up for reelection, Iowa’s Joni Ernst already had a target on her back.

In light of controversial comments on Social Security, a struggling farm economy and an impeachment inquiry into President Donald Trump, her path to a second term has become more difficult.

Ernst’s photo was the lead image in a Morning Consult article released today, detailing the woes of “2020’s most vulnerable Senate Republicans.”

The poll “places her underwater with Iowa voters,” with 39% approving of Ernst and 43% disapproving.

Liberal groups have pounced on the state’s junior U.S. senator, blanketing social media and the television airwaves with anti-Ernst messaging.

This week, American Bridge launched a “multi-pronged campaign” against Ernst with 30- and 60-second digital ads and a text message campaign aimed at Iowa’s senior citizens.

The ads center on Ernst’s suggestion politicians should discuss reforming Social Security “behind closed doors” so as to avoid scrutiny in the public and media.

“Joni Ernst knows her plan to privatize Social Security is toxic, so she wants to do it in secret,” said Zach Hudson, an American Bridge spokesman, in a statement. “We’re going to make sure seniors know the truth about her plans to subject Iowans’ retirement to the whims of the Wall Street firms bankrolling her campaign.” 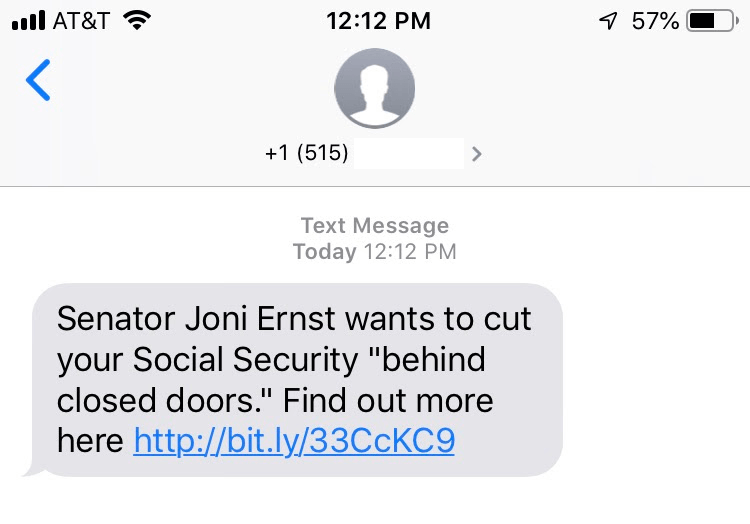 If the recipient of the text message clicks on the attached link, it directs them to a webpage featuring the 30-second ad and how to learn more about Ernst’s voting record.

“Joni Ernst wants to privatize your Social Security. Even worse, she wants to do this in secret,” the ad states.

A September ad called “Behind Closed Doors” compared her views on Social Security to Republicans’ attempts to repeal the Affordable Care Act.

“Republican health care repeal bills were crafted behind closed doors. Senator Joni Ernst voted to eliminate protections for people with pre-existing conditions, charge people over 55 times more for their health care and hike up the costs of prescription drugs,” the ad states. “Now, she’s going after our Social Security behind closed doors.”

In addition to the Social Security controversy, Ernst also is taking heat for her refusal to support the impeachment inquiry into President Donald Trump and condemn him for asking a foreign president to interfere in the 2020 election.

“How can we have a president that thinks the law doesn’t apply to him?” the ad states. “Who would bargain away the security of our nation and our elections for his own political gain?”

Ernst has called House Democrats’ inquiry an “impeachment circus,” casting it aside as an issue unimportant to Iowans. However, a recent Fox News Poll showed 51% of registered voters want Trump impeached and removed from office.