On an aptly-named “Bernie Beats Trump” tour,  Bernie Sanders stumped through Iowa counties this past week that went for Barack Obama in 2008 and 2012, but chose President Trump in 2016.

The four-day tour concluded after beginning Saturday in Des Moines and ending Tuesday in West Liberty.

During the tour, Sanders made his own electability pitch to those swing-county voters.

“I kind of understand why it happened. I saw the ads, they were pretty good,” said Sanders of Trump’s win in 2016. “Only problem is, Trump lied. And it turns out that we have a president that is a pathological liar. He lied then, he’s lying now.”

To his delight, Sanders drew boos throughout the day when he rattled off a list of countries where Trump-branded products are produced — places like China, Turkey, India and Indonesia.

“If Trump really wants to talk about bringing manufacturing jobs back to America, he should lead by example,” Sanders said.

The Sanders campaign brought out first-time caucus-goers in 2016, and they’re looking to do the same in 2020. The campaign held an event Monday at Luther College in Decorah that was loud, full of energy and packed with enthusiastic young people, most of whom weren’t eligible to vote in the last presidential election.

“Bernie was an outsider in 2016, whose ideals set him apart from the rest of the field,” said Sean McKenzie, a political science and environmental studies student at Luther College. “Now, Bernie has set the bar for the rest of the candidates, his ideas are the benchmark.” 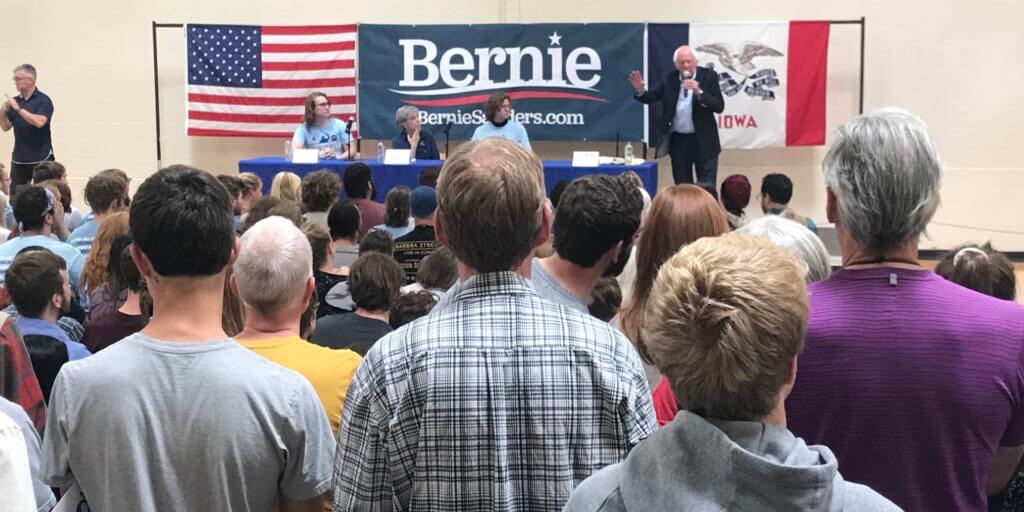 The Democratic Party’s changing policy platform was another point Sanders discussed while on the road in Iowa, specifically hitting on his idea to implement tuition-free public colleges and universities.

“People called me crazy in 2016, now the whole party seems to be running on it, and 12 states have moved toward it since then,” Sanders explained.

Sanders’ long-held beliefs contribute to his support from young people who are used to seeing candidates waver on policy stances through campaigns and careers.

“Throughout his career, Sen. Sanders has always fought for working class people of all demographics in our country, and abroad,” said Samantha Douglas, president of Luther College Pride.

“Bernie has been fighting for us for decades,” McKenzie said. “Now it’s our turn to fight for him.”

At each stop, Sanders tried to get a feel for the room with show-of-hand questions. One of the questions he asked at each stop was whether or not health care should be a human right in America.

In Decorah, Sanders gave attendees a chance to tell their horror stories dealing with the health care system. A woman named Danielle, prior to enrolling in Medicaid last year, said she paid $1,750 per month on insurance premiums for an individual health care plan.

The senator then brought her up on stage to explain more about her situation and ask questions about how she would be impacted by his Medicare for All policy.

He did note, however, the country’s wealthiest citizens would pay more for their health care under Medicare for All, compared to what they currently spend on private insurance.

In Dubuque, Sanders told Danielle’s story when he talked about health care, citing her high monthly costs as a reason why the country must address the outsized profits enjoyed by health care companies.

“We’re going to win this fight because people are done not going to the doctor when they need to, they’re tired of filling out forms, and they’re tired of arguing with health insurance companies over what is and isn’t covered,” Sanders said.