Just a few years ago, Jefferson, Iowa was like most other rural communities: aging, declining in population, struggling to attract workers. Young people were moving away to start their careers.

Even nine months ago, there were no technical training programs in the area.

Fast forward to last week, and Jefferson, with a population of just over 4,000, officially opened The Forge, a business brought in as part of a ground-breaking, bipartisan project to revitalize rural America with technology jobs. While The Forge’s opening was celebrated with an event to recognize the hard work done to get to this point, those working on the project hoped it was the start of a greater trend.

“Today is not the end, today is the beginning. We have lightning in a bottle here,” said Chris Deal, a Jefferson native, at a community kick-off event that saw several hundred locals turn out. “We’re creating a roadmap for other communities to follow.”

With the help of Silicon Valley Congressman Ro Khanna, funding from tech giants like Facebook, Microsoft and Accenture, the support of Iowa Gov. Kim Reynolds, and a partnership with community colleges in the area, Jefferson could lay the framework for rural communities to flourish.

But it’s not just an economic project — it also looks to have political and cultural benefits too — Khanna wants to ensure that Middle America isn’t being left behind in the new, tech-driven economy, which can lead to resentment and counterproductive political fallout.

The Forge is a “digital think tank.” The business itself is open-minded; they are software and product-development consultants who help build software and prototype technology. And while that alone would be exciting for any small town, forward-looking leadership in Jefferson hopes it will turn into much more than that.

“There’s 39 school districts participating — Facebook is now funding these scholarships, Corteva is, I think Microsoft will expand beyond what Kevin Scott has already done,” said Congressman Ro Khanna, who represents California’s Silicon Valley and has played a major role in the development of this mission. “So, I think you could actually see this scale into something, at least at the scholarship level, that starts getting a lot of people these digital skills.” 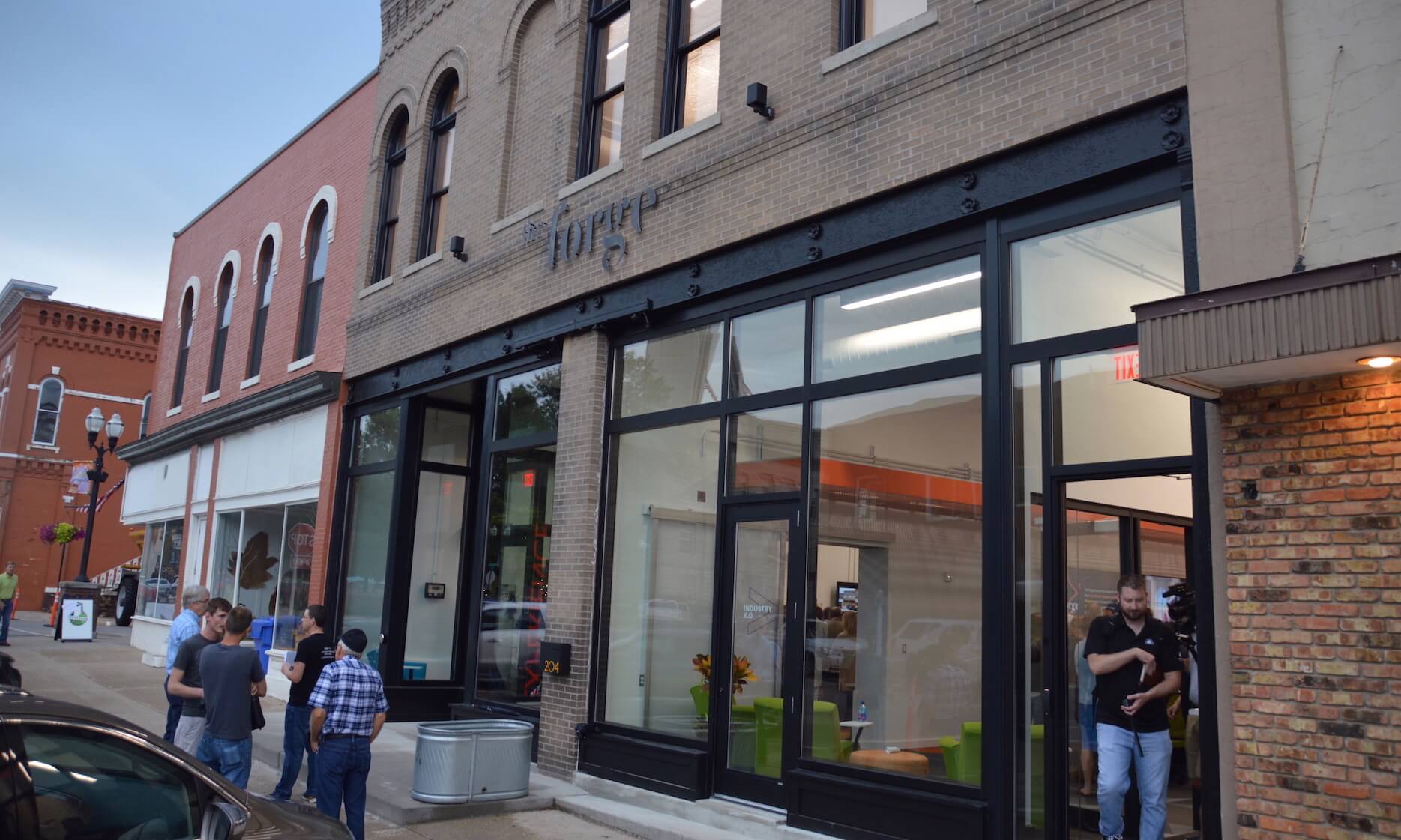 Physically, The Forge is a stunning software development studio. Recently renovated, the design of their space feels modern, and what can only be described as “Silicon Valley-y,” but they also maintained some historical features, like old, hardwood fixtures throughout.

At the open house, staff gave tours to legislators, residents, town leaders and others, driving home the point that every aspect of the design is intentional, from the layout and color scheme to specific, unique features of the design. 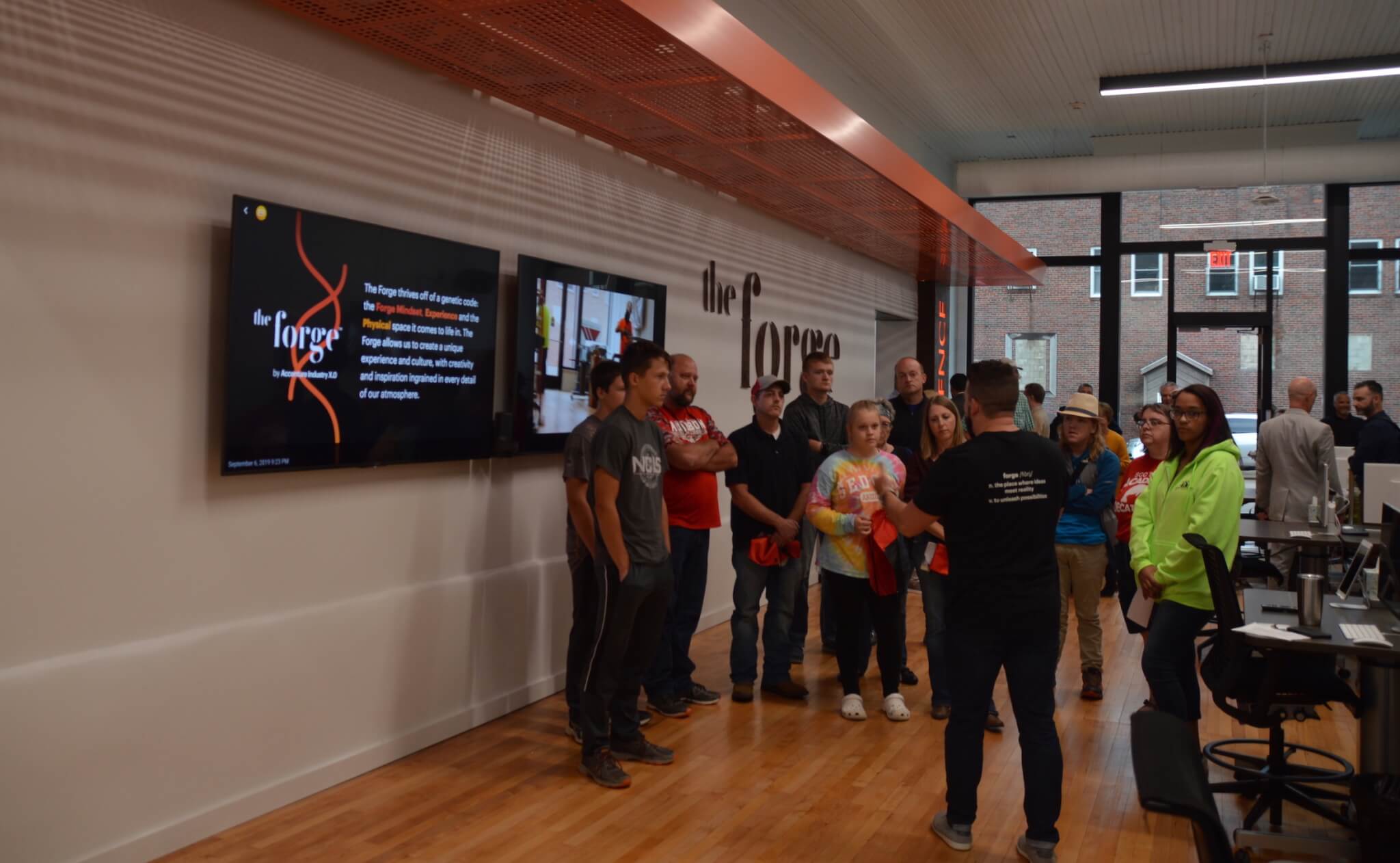 Jobs at The Forge will be held in high regard, as starting pay looks to fall around $65,000 for most workers there, far above the average salary in this county of only 9,000 people. But the hope is not only to create a dozen or so well-paying jobs for rural Iowans. Rather, with the partners they have amassed in Jefferson, The Forge wants to be a catalyst for tech talent curation and provide an incentive for young workers to move outside of cities and suburbs.

“We need these extraordinary opportunities for the jobs of the future to be in communities across America, that was supposed to be technology’s promise,” Congressman Khanna said. “That you could live the life you wanted, you could stay in your community, preserve your way of life, live in a community where everyone knows your name and still have access to jobs around the nation, around the world.”

Why a town with a population of around 4,100 people for this project? Forward-looking infrastructure.

Thanks to the Greene County and Jefferson leadership, which Reynolds and Khanna both praised during their visit, the match actually makes a lot of sense.

“The biggest thing this place has is leadership. The leaders in this county are the ones who led the charge,” said Zach Mannheimer, of McClure, a Midwest-based surveying, engineering, and planning firm.

With Mannheimer and others on board, they help small and growing towns put together a vision for the future to level-up the culture of their town to help attract young professionals. 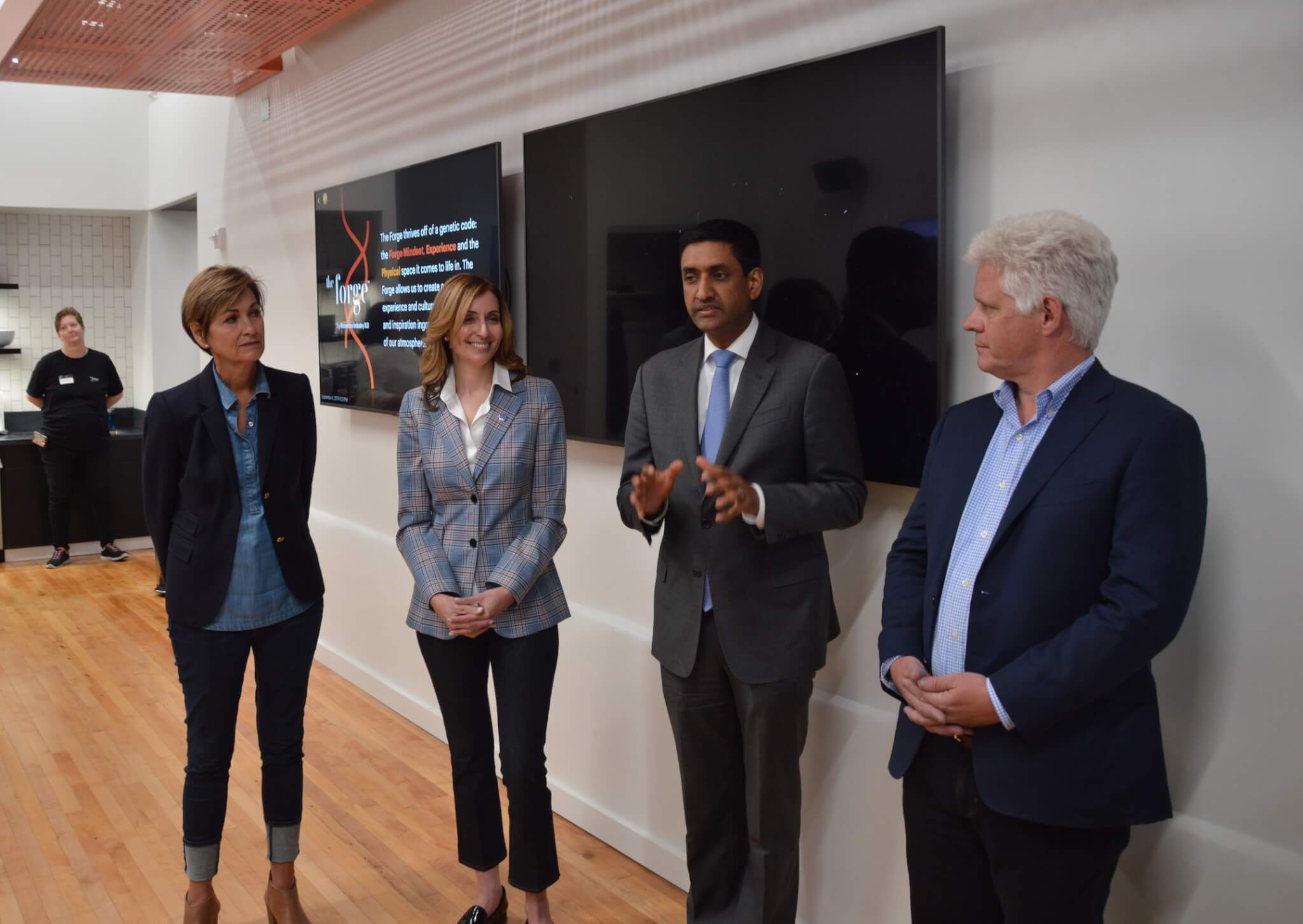 A few years ago, Jefferson Telecom, a local phone, internet and cable provider, invested millions to upgrade its connectivity infrastructure and bring fiber-optic cable to Jefferson. This type of private investment put them in a great spot to attract economic development.

“Jefferson has a lot of assets. They had a private company that did fiber, they have one of the best community colleges with DMACC and Iowa Central partnering, and they’ve got Accenture,” Congressman Khanna explained. “If we can’t make this work in Jefferson, what hope is there in Beckley, West Virginia?”

Accenture owns The Forge, and they have a Forge in several Midwestern cities including Des Moines and Chicago — and now Jefferson. Accenture provides services with consulting, digital and technology operations, each of which is its own branch of the company. They’re another tech giant that will help businesses with any type of strategy, software or product development needed.

The public-private support and investment will be instrumental in the success of this project, especially as the program works with the education system of the area.

“Technology is flattening the playing field. We have connectivity in Greene County that rivals anywhere in the world, we have a fantastic education system,” said Chris Deal, a recently-returned Jefferson resident. “And for our visitors, this is our public education system, mind you, right here, that creates all of these opportunities. The time for rural is now.”

Utilizing the education system is another big piece of this puzzle. Schools in the area are embracing technology, teaching coding classes as early as third grade and creating more specific events like a girls’ coding camp to encourage them to learn about computer careers.

“We started scratch-coding with our third and fourth graders, that’s something new we started doing this year,” said Amanda Huff, a 4th grade teacher in Jefferson. “They’re really excited because they love technology, so anything they can do on the computer is great.”

The programming starts early and includes continued partnerships through high school, leading up to opportunities with local community colleges and The Forge, where students can put their new knowledge to the test.

After completing high school and two years of collegiate coding courses, students can apply to learn at The Forge, earning credit as they observe operation and practice application. Upon completion of that program, they can then apply for a paid apprenticeship at The Forge, where they’ll spend six months on the team, if selected.

“They’re a very up-to-date software engineering company. They’re at the forefront of the industry, so it’s exciting to see that new thinking out in a small community like this,” said Kyle Hovey, a software engineer who graduated from Simpson College in Indianola. “But I think the challenge will be recruiting people out to this small town and even letting people know that it exists.”

Like Hovey said, there are hurdles to clear before the success of this project can be measured. Initial investment has been made, and the program is in place and ready to roll. However, it will be years before anyone coming up through the coding classes is ready to work.

Another hurdle is the location of Jefferson, which is just a touch over an hour northwest of Des Moines. This is an ideal spot for McClure to help, as they work with small towns within a 90-mile radius of metro areas, like Des Moines.

McClure is helping reshape downtown Jefferson, looking to bring in nice restaurants and other cultural tools to make the town more attractive to young folks, which will be necessary if the project is to be as successful as people working on it hope it will be.

“I think quick wins are gonna really need to be promoted, and the state and community need to really get behind this and help incubate it in Jefferson,” said Rob Wiley, a software project manager from Adel. “Don’t be jealous if you don’t have your own Forge in your other little town, help Jefferson be successful. It’s a pilot program, so Jefferson’s success will make it easier for other towns and areas — so, they need some success.” 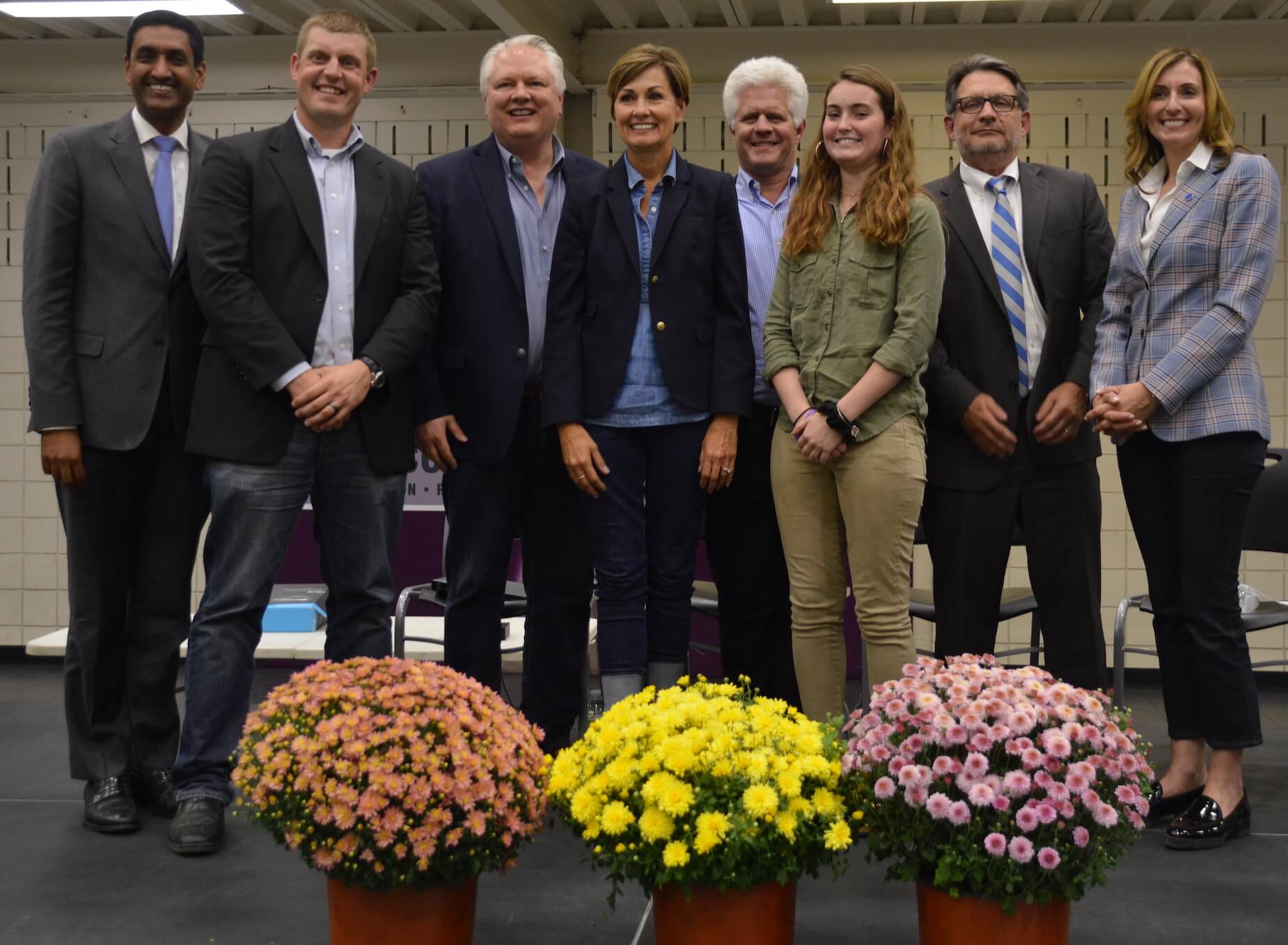 Congressman Khanna shared similar thoughts, saying they need a “proof point” to show that this model can work for revitalization in rural areas. Khanna believed that was not only important for developing rural areas economically, but thought it also could have important political ramifications if the Jefferson Forge is successful.

“[Finding success here] also puts more urgency on federal lawmakers to say ‘let’s get high-speed, affordable internet and tech scholarships everywhere; it worked in Jefferson,'” Khanna explained. “The only thing that is going to convince rural America is action. For the last 40 years, they’ve had broken political promises; they’re sick of it.”

Thanks to the influx of up-front investment from Accenture, Microsoft and Facebook, the program will be backed financially for quite some time.

“We’re committed to helping Iowans develop the tools and skills they need to flourish in an increasingly digital economy,” said Will Castleberry, the Vice President of State Policy for Facebook.

Reynolds, Congressman Khanna and executives from Facebook and Accenture frequently referenced the “vision” for the future of Iowa, the U.S. and the tech industry at-large.

Reynolds said she looked forward to the success in Jefferson, hoping to share the formula with other areas and create a new future for Iowans.

“I’m proud to be a partner with Forge as we fill our pipeline with some of the most job-ready, STEM-savvy workforce in the country,” said Reynolds, a Republican. “Most importantly, I’m excited to share your message with young people that you don’t have to leave Iowa to launch your career, lead your community and have a global impact, it’s all right here.”

The relationship between Reynolds and Congressman Khanna is somewhat unusual — a conservative Republican governor in a battleground state working with a California Democrat who is the co-chair of Bernie Sanders’ campaign to bring technology to rural Iowa.

Despite their partisan differences, Reynolds and Khanna found common ground on efforts to protect and enhance the rural way of life. 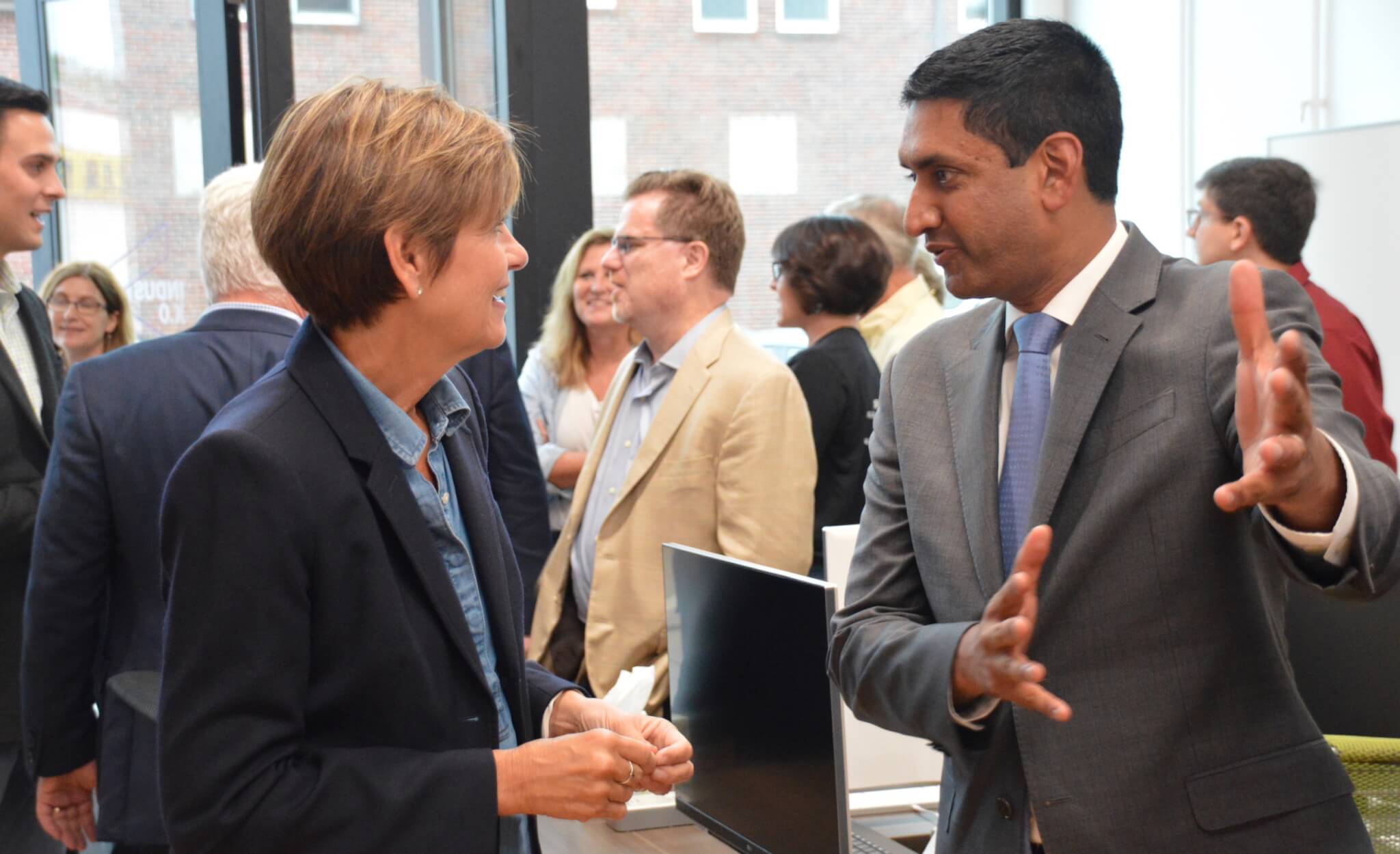 “If we don’t do that, we’re going to see this continuing division that we have in this country where jobs and wealth are concentrated in certain communities and other communities feel that their kids either lack equal opportunity or have to leave, and that’s not a fair choice,” Khanna said.

He acknowledged the unlikely pairing, but added that building bipartisan relationships is much-needed progress.

“People are desperate for working across the aisle, not cosmetically but substantively. It’s ‘let’s join hands in a common project to bring good jobs and opportunities and hope to a community,'” Khanna said. “We don’t agree on every issue, but we have a mutual desire to see technology come to people in communities left behind, and the governor gets it in terms of investing in the future. I’m committed to really partnering with her any place that we can be effective.”