Montana Gov. Steve Bullock may not have been on the debate stage yesterday night, but he was at the next-best thing: a room filled with Iowa caucus-goers.

“There’s probably only one place I’d rather be than Clive tonight,” Bullock joked to the Iowans at his event at Granite City Brewery.

Former Iowa First Lady Christie Vilsack told the crowd of 50 gathered to hear from Bullock that she thinks “having only one governor in the race is unfortunate.”

Vilsack hasn’t endorsed Bullock, and said she planned to watch Thursday night’s presidential debate at home alone, but she did offer the governor plenty of praise.

“Governors get things done,” said Vilsack. “They have to be accountable to the public every day. They have to balance budgets like we people at the grocery store. It’s a different way of going about life politically, which representatives and senators don’t really have to do. So, I’m always an advocate for governors.”

Still, she made it clear she hasn’t endorsed any candidate, nor has her husband, former Iowa Gov. Tom Vilsack. They’ve also hosted events with Senator Michael Bennet.

“You want to watch a candidate over a period of time to see how he or she reacts to the best days or the worst days — what their stamina is across the long campaign — and we’re trying to help every candidate be the very best they can be,” Vilsack said. 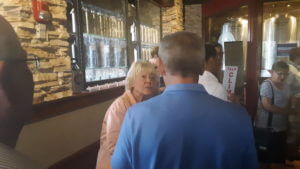 Iowa Attorney General Tom Miller, who has endorsed Bullock, also had some nice things to say about the Montana governor.

“He has integrity and character at the highest possible level,” said Miller, the nation’s longest-serving attorney general. “He always does what’s right in terms of life, in terms of his positions — no matter what the political pressures are otherwise — he does what’s right.” 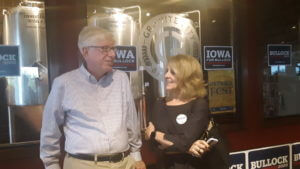 “No matter where the field is now and no matter how big it is, coming out of the early states will take a big field and make it much smaller,” Bullock said, on why he chose to come to Iowa on the night of the Sept. 12 debate.

“When we talk about rural issues, I’ve lived that. When we talk about needing to win over [Barack] Obama and [Donald] Trump voters, I’ve done that,” Bullock said. “It’s not just about national television. And it’s not about transferring a bunch of money to polling. I certainly hope that it’s not a disadvantage to be a governor longterm, because you also look at it and Barack Obama was a first-term senator. The last senator we successfully nominated was John F. Kennedy, in part because governors actually have to govern and do stuff, so I think we bring a lot different perspective to the office.” 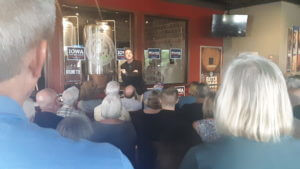