“The small refinery waivers that came out on August 9th by President Trump are like the nail in the coffin, or the last straw, with farmers,” said Pam Johnson, former President of the Corn Growers Association, at a press conference at the Iowa Capitol Tuesday afternoon.

Johnson was joined by former USDA Secretary Tom Vilsack and Senator Amy Klobuchar to discuss the latest round of 31 ethanol refinery waivers granted by the EPA.

“I believe in biofuels, and I’ve never backed away from that,” Sen. Amy Klobuchar explained. “That’s why I’ve gotten to work with Secretary Vilsack on this, and have the support of Pam [Johnson] because of that.”

After this latest round, there have now been 85 small refinery waivers granted by the EPA during the Trump administration, a huge increase from the Obama administration, which has locked billions of gallons of ethanol out of the market. While public pressure has been mounting for several months, the announcement in early August has led to call-outs from farmers, former Iowa officials, current Iowa Senators, Democratic presidential candidates, and commodity associations.

“Remember, this doesn’t just end with the Iowa caucuses,” Klobuchar said. “This is not only an Iowa issue … I’ve been able to get the support of many senators when it comes to this. We had 38 senators on a letter that I led with Senator Grassley on this waiver issue – that’s a lot of senators and a lot of states.”

One of the talking points used against biofuels in the past is their impact on the environment. But Senators Grassley and Dick Durbin called on the EPA earlier this year to update their ethanol science, which they say is outdated and more than a decade old.

“The ethanol industry is responsible for taking the equivalent of 12 million cars off the road every single year in terms of discharge and air quality,” explained Secretary Vilsack. “The folks who are concerned about ethanol sometimes fail to recognize the efficiencies that have occurred in the production of ethanol.” 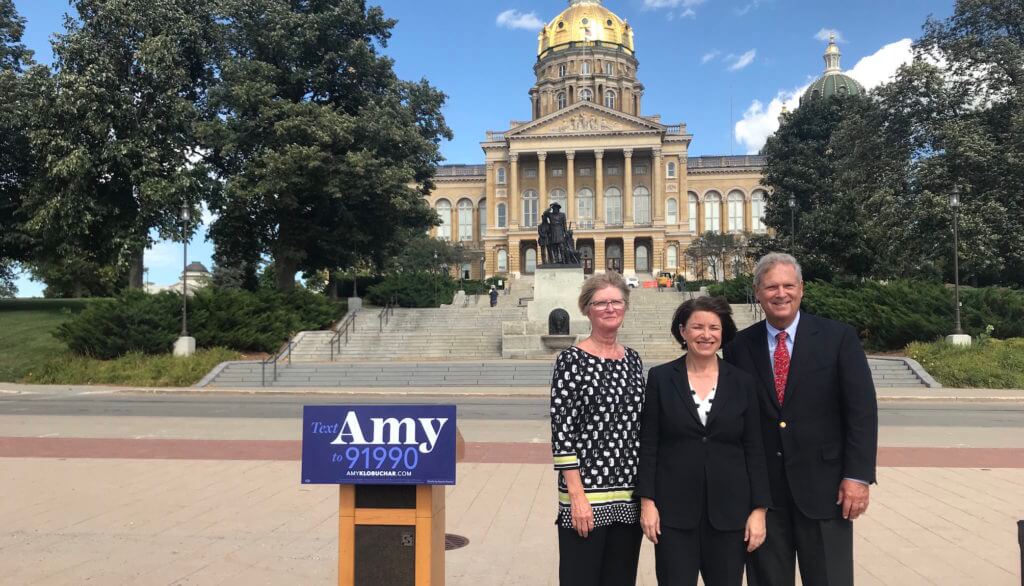 Vilsack said that the industry wasn’t as efficient as it should have been when it first got started, but that production is much more sustainable than traditional fuel and there’s a number of useful byproducts that save money elsewhere in agriculture, like feed.

“I think it’s important that when people question this, that they are basing it on current information and not something that may have been true ten years ago,” Vilsack said.

Over the past two months, Trump has been criticized repeatedly for allowing Andrew Wheeler and the EPA to grant these waivers to companies not in true hardship. President Trump was called out by farmers in Iowa during a fundraising trip, which spurred a meeting with Wheeler and Sec. of Agriculture Sonny Perdue to review the EPA’s stance on waivers.

But a month after the meeting reportedly occurred, the EPA granted 31 of 42 waivers applied for. Earlier this week, the Renewable Fuels Association got ahold of documents that showed the EPA ignored a recommendation from the Trump Administration to redistribute the biofuel volumes.

After months of ridicule over the continuity of these waivers, patience is running out in the Midwest. It’s now the end of August, and the caucuses are just over 5 months away. If no new path is set for the RFS, and no waivers are redacted, biofuels could end up being an election issue in the 2020 general election.