Studies have shown that bald men are perceived as more intelligent, mature and as more dominant leaders than their hair-laden counterparts. If that’s the case, then Cory Booker not only brought three charitable Iowans into his chrome dome club, he enhanced their social standing as well.

Such was part of wild, amusing, day-long Iowa Caucus visit made by Booker this past Friday, traveling from Council Bluffs to Des Moines, hosting four events and speaking at a leadership conference along the way.

The day started early, with the first event in Council Bluffs kicking off at 9:30 a.m. Despite it being 9:30 a.m. on a Friday, the room was packed with more than 100 potential caucus-goers.

About to get a @CoryBooker day full of events underway. First stop: Council Bluffs – more than 100 people in the room at 9:30 am on a Friday #IACaucus pic.twitter.com/K5vsdHH3ei

Booker gave a pretty general stump speech, hitting his usual points: he’s running to be a unifying force in America, overcoming Trump’s divisive language with love for fellow countrymen and women, and working to build a fifty-state Democratic party to take back control of the government.

During questions, Booker was asked about Mueller hearings, criminal justice reform, bipartisan efforts, attacks on journalism and his faith.

Council Bluffs conversations is over, @CoryBooker now taking selfies with everyone – including bunny-ears guy pic.twitter.com/i5izeaXJfs

The Corner is an adorable, little coffee shop in Greenfield. The layout of the shop was not designed with political events in mind, yet it made a nice, intimate venue for Booker’s second event of the day.

After a shorter speech, Booker took questions for over a half-hour. Attendees asked about climate change, foreign relations, prosecuting Trump and military policies, including punishment and care for sexual abuse in the service.

.@CoryBooker getting introduced at The Corner in Greenfield, Iowa #IACaucus pic.twitter.com/bUPkqJPXMg

Booker was introduced at The Corner by Kenan Judge, a State Representative from Iowa’s 44th district. Judge, from Waukee, is a freshman representative who used to be the group Vice President of Hy-Vee’s meat, seafood and deli.

During his busy day, Booker stopped in at the New Leaders Council Millennial Forum at the Marriott in downtown Des Moines. He spoke for about fifteen minutes before doing a Q & A with the host for more than thirty minutes in front of a room full of young leaders from around the country.

With potential voters from all parts of the nation in the room, Booker took questions on a wide range of topics. Aptly named the Millennial Forum, most of the attendees were … Millennials. 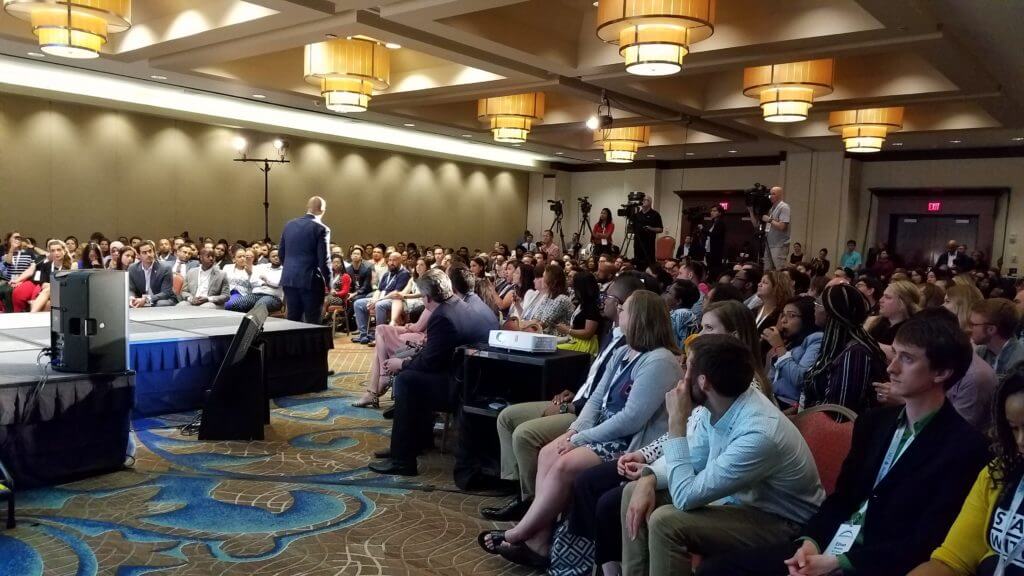 “Well, I have a Baby Boomer’s body and a Millennial’s soul,” Booker joked when asked by a woman from Atlanta, Georgia about what he would do as president to help younger generations overcome their limited upward mobility opportunities.

“Baby Boomers, 95% of them did better, economically, than their parents,” Booker said. “And now that has gone down for Millennials, it’s a coin toss. So, we have an urgency to make the promise of America real for everybody.”

Booker also took a question on police brutality from an attendee from Detroit, who asked what Booker would do to address the systematic problem facing the United States.

Booker admitted that he struggled with the issue when he was the Mayor of Newark, New Jersey, but he did say he learned a lot about the problem.

He talked about predictive analytics, which looked at certain events that occur throughout a police officer’s day that lead to a higher likelihood of them doing something unlawful.

“Remember that police officer that sat on a teenage girl at a pool party?” Booker asked. “They found that one of the predictors of police misconduct is police officers who have to do more than one suicide call in a short period of time, and that guy had two.”

Booker told a story about an officer in Newark who charged into a building after hearing shots fired, and arrived on the scene to find a person who had shot their child before taking their own life. He used this story to make a point about the heavy, dark experiences police officers go through that they are forced to just move on from, returning to work the very next day under emotional distress.

“We have to do better about creating a profession that has accountability and transparency measures, but also has things for local police departments to start supporting police officers,” Booker explained. “There are ways to create the outcomes we want.”

The day finally concluded in West Des Moines, with what ended up being a rowdy event where three heads were shaved, raising $7,500 for charity in the process.

There was a little more than 100 people who showed up to this particular event, which resulted in a very crowded, warm and energetic barbershop environment.

Walk-in shot of the Crowd at Platinum Barber shop in West Des Moines for @CoryBooker ‘s last event of the day #IACaucus pic.twitter.com/D0TmyOySJZ

Sen. Booker ran a little late to this last event, which started about fifteen minutes behind schedule. Few seemed to notice, though, as there was free barbecue catered by a renowned Kansas City chef and drinks being served. By the time the event did kick off, the entire barbershop was packed from front-to-back with folks sitting everywhere they could find a spot.

After Booker spoke, he brought forth his Iowan driver, John, who volunteered to have his head shaved for charity. Sen. Booker offered to donate $1,000 of his own dollars to the charity of John’s choice, and Disney Executive Sean Bailey, who was also in attendance, offered to match that.

Three heads are getting shaved here on behalf of charities. Quite a bit of money being thrown around @CoryBooker #IACaucus pic.twitter.com/rh9BJNMwnT

Before John’s haircut took place, Booker asked if anyone else in the room would shave their head for, what ended up being, a $2,500 donation to a charity of their choice. 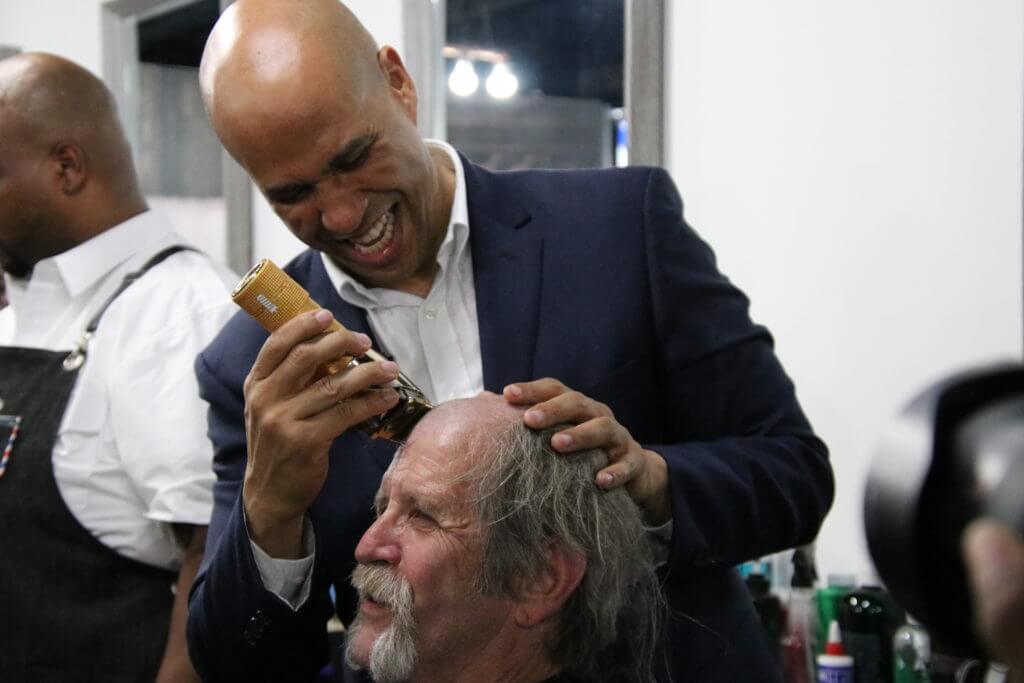 Two more men in the room volunteered, donating to two children’s hospitals and a fund dedicated to assisting refugees. 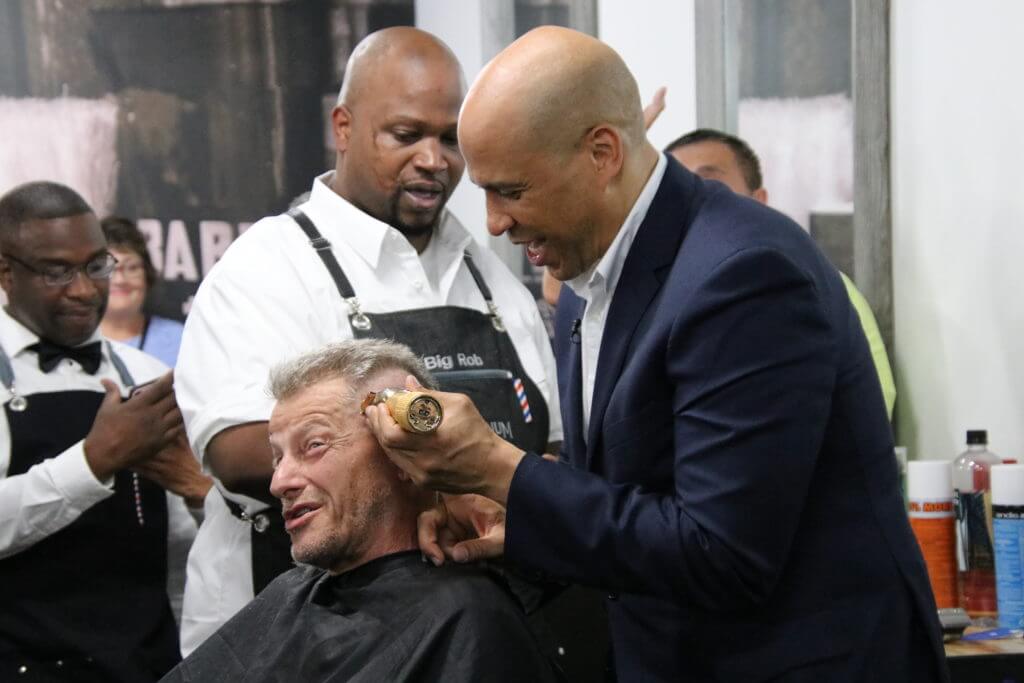 Head shaving turned into quite the spectacle, with Sen. Booker being handed a gold clipper to remove hair with. Laughing throughout the process, Booker welcomed three men to the hairless club in the name of charity.

And just like that, they’re as bald as @CoryBooker pic.twitter.com/n2rUNPh3sQ

Despite giving up his healthy head of hair for a charity donation, one of the men who took part said he is still an undecided voter.

"I have to get my head shaved at least three times by a candidate before I'm sold" https://t.co/zSTqFh1EwA

After the haircuts were complete, the event concluded with a closing remark and Booker headed to the back of the shop to take selfies and answer questions, which ended up lasting nearly another hour before voters really cleared out.

The event has been over for a half hour and theres still a sizable crowd here. Also, every time I’ve looked at the door since it concluded there’s been a new person signing the sheet committing to caucus for @CoryBooker . There was almost 200 people here tonight #IACaucus pic.twitter.com/qLIPwIdZIU

For nearly forty-five minutes following the event, Booker’s team was signing up folks who were willing to commit to caucusing for the Senator.