When Senator Kirsten Gillibrand tried to win over a Republican held congressional district in Upstate New York her opponent repeatedly ran a commercial that showed a picture of her face covered in flames.

In the background, a deep voice would say “she’s not who you think she is.”

During that 2006 race, Gillibrand said she was demeaned, dismissed and called names.

But, the quick-witted lawyer took the high road.

She managed to out pace her opponent and easily won in the two-to-one Republican district.

“The one mistake my opponent made was the same mistake that President Trump is going to make. He never took me seriously,” Gillibrand told a crowd gathered in Dubuque earlier this week.

She took a three-day swing through Iowa this week, with her trip bookended by two big events. She spoke at the Progress Iowa Corn Feed with nearly a dozen other candidates July 14. Then she participated in a candidate forum hosted by AARP and the Des Moines Register July 16.

Between the events, Gillibrand made stops in Dubuque, Maquoketa and Clinton, and toured an ethanol plant in Dyersville.

Throughout the whirlwind trip across Eastern Iowa, Gillibrand discussed her thoughts on dozens of subjects with potential caucus goers.

The national media isn’t so convinced she can win. The Washington Post, Politico and The Atlantic singled her out of the 23-candidate field saying she can’t gain traction. The same hasn’t been said of Cory Booker, who’s typically been in the same position in the polls.

Reuters questioned whether Gillibrand didn’t disclose her latest fundraising totals ahead of the second-quarter filing deadline. It turns out Gillibrand has more than $8 million cash on hand, putting her in sixth place on that metric in the field (though her total raised this past quarter did still lag most others).

The Senator was asked about her low polling numbers at least three times in Iowa during this week, but it didn’t seem to shake her.

She’s done this before, she assured reporters in Cedar Rapids. She knows what she’s doing.

A Family Of Tough Women

Gillibrand has been politically active since she was a child, and comes from a long line of powerful women.

Her grandmother, Dorthea “Polly” Noonan is a bit of a feminist legend in New York. Gillibrand mentions her in every stump speech she gives.

She says her grandmother was born of modest means and worked every day of her life. She never went to college. She was a secretary of the New York state legislature and Gillibrand said she recognized 75 years ago that women didn’t have much of a voice.

So, the women organized.

“You couldn’t get elected in Albany without the blessing of my grandmother and her lady friends,” Gillibrand said. “And I knew as a little girl that women’s voices matter because of her, and that grassroots activism matters, and that what you do with your time matters.”

Gillibrand’s mother, Polly Rutnik, did have a chance to go to school. She was a lawyer and one of three women who graduated from her class. Gillibrand followed in her mother’s footsteps and graduated with a law degree from UCLA.

After Gillibrand gave her speech in Dubuque and answered questions from the audience and took selfies with everyone who wanted one, she sat down for a few more questions.

It was after 8 p.m. on a Sunday night and she’d spent the previous week working long days in the Rust Belt on her ‘Trump’s Broken Promises’ tour, traveling through Pennsylvania, Ohio and Michigan.

She was still happy to keep talking about the influence of the strong women in her life.

Asked to describe her grandmother using one word, Gillibrand said “feisty.” She called her mom “smart.”

And she took the time to explain why she liked the nuns at her Catholic school, something she talks about in her book. She said she was drawn to the nuns because they were “kind and centered.”

The Role Of Faith In Gillibrand’s Work

But there were some aspects of the church she disagreed with.

The Catholic Senator has a history of standing up for LGBTQ rights. She fought to repeal Don’t Ask Don’t Tell and has a 100 percent lifetime rating from the Planned Parenthood Action Fund, and she defends those achievements.

It’s apparent that her faith translates to kindness. She says in her stump speech Donald Trump punches down at people. He divides people.

Gillibrand’s belief in God guides her in a different direction. She wants to lift people up. She has a desire to help. And it shows.

She’s the 2020 candidate who has done the most to bolster the Democratic Party, according to an analysis from the New York Times. She helped get Tulsi Gabbard elected to the House of Representatives.

And she becomes visibly emotional when talking about the children she’s seen locked in cages at detention centers on the U.S./Mexico border, and she’s made headlines for tearing up while talking about the meaning of white privilege.

Gillibrand nearly cried on stage at a Netroots Nation conference in Philadelphia when she told the crowd she travels with a staff member who is black.

“I see how she is being treated differently when we walk into a hotel. I’ve seen it and it infuriates me,” Gillibrand said. “So if I don’t understand that it is my responsibility to lift up her voice, to lift up the voices of black and brown Americans every day, then I’m not doing my job as a Senator and I’m not doing my job as a presidential candidate and that is my responsibility.”

Her benevolence has been noticed before.

Senator Tom Harkin, who Gillibrand describes as a role model, left her with some shoes to fill when he retired.

She took over his hallmark work fighting for issues that affect people with disabilities. And she led efforts on Habitat for Humanity and YouthBuild.

The bulk of what Gillibrand talked about during her time in Iowa happened outside that little bar nestled next to the Mississippi River, though.

The next day Gillibrand toured the Big River ethanol plant in Dyersville, Iowa.

Curiosity On The Campaign Trail

Gillibrand was inquisitive about the science behind ethanol, and discussed how to get the country’s transportation industry operating on 100 percent renewable fuels. She pitched her idea to the CEO of Big River United Energy CEO Ray Defenbaugh.

Defenbaugh told the Senator he doesn’t think it’s anyone’s goal to get all forms of transportation running on biofuels.

“Why not?” Gillibrand asked.

“I heard there is new technology that needs a lot of work,” Gillibrand said. 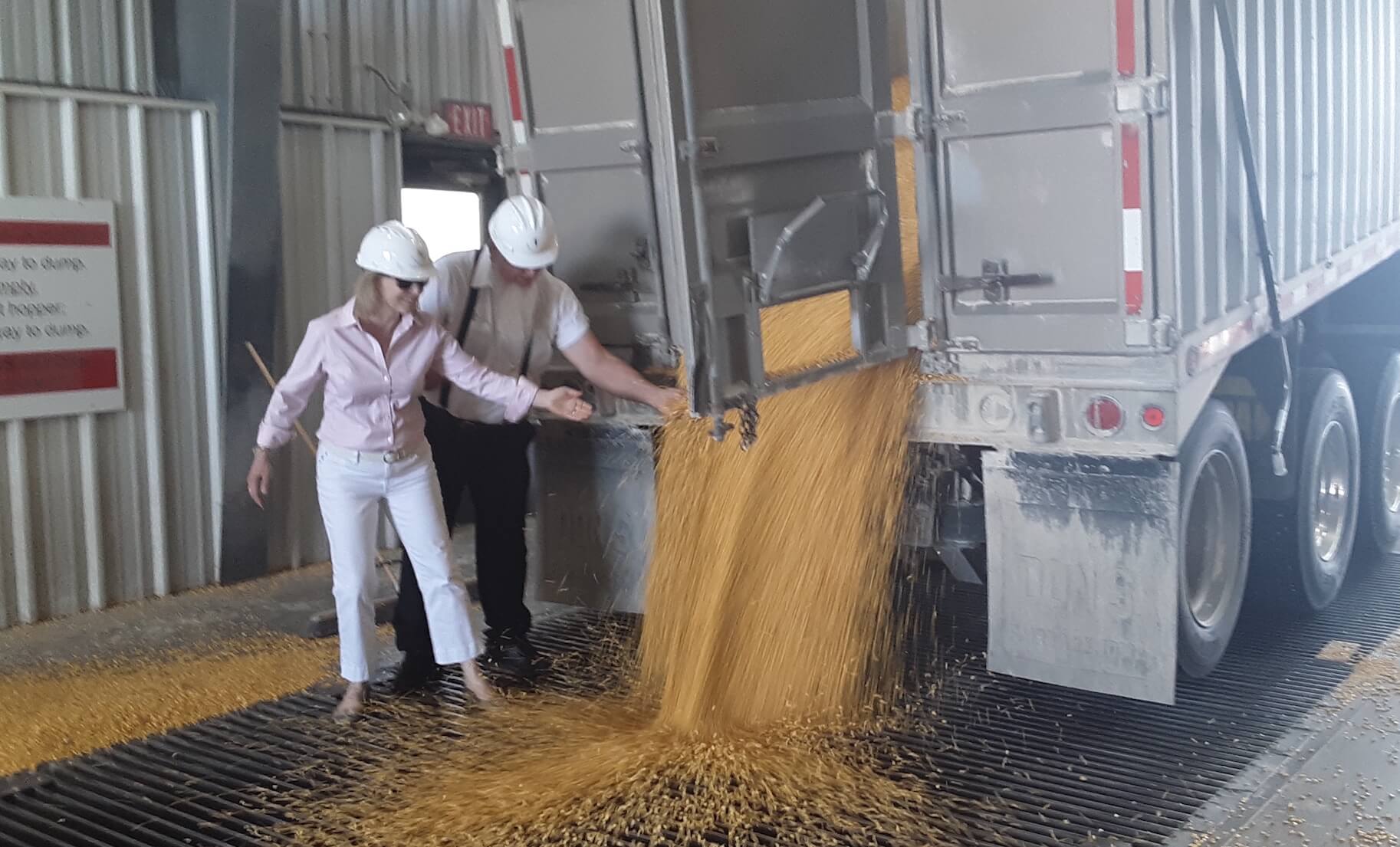 She asked about a new technology that would allow ethanol producers to “use switchgrass or be able to use willow or to be able to use bio waste or corn husks; different components, but the technology never really came to fruition over the last decade.”

“But if we put – let’s just say we put a lot of money in and we really researched alternative biofuels for the next 50 years with the goal and ambition to move entirely off of fossil fuels based gasoline into biofuels gasoline, how would we create that?” Gillibrand asked.

Well, Defenbaugh said, the rules that are already in place to encourage ethanol production and usage would need to be enforced.

“It never has been,” Defenbaugh said.

“For me it is,” Gillibrand said. “I don’t want to be dependent on gasoline at all.”

She also inquired about the supply chain. Defenbaugh said they buy from the general market, but they also buy 50 to 60 percent of their corn directly from the farmers.

The conversation then quickly moved on to how ethanol producers can use more than just the starch from the corn.

Gillibrand, sensing where the conversation was headed, asked if they gave proteins to farmers for feed.

Defenbaugh confirmed that they do, and said they use the Co2 the corn produces for freezing meets at one of their factories.

“I don’t even know about that technology,” Gillibrand said. “How does that work?”

Speaking of Gillibrand’s biofuels plan, the easiest way to get to know the Senator might be through her position on the Green New Deal.

Climate change is the biggest threat to America, she said, and tornadoes and floods have already killed people.

That’s why she will make sure the Green New Deal bill becomes law.

“What Congressman Delaney doesn’t understand is every aspect of the Green New Deal is already bipartisan, and I’ve been passing laws that are relevant to the Green New Deal for the last ten years,” Gillibrand said while standing outside that ethanol plant.

“The aspiration of net zero carbon emissions in ten years is an organizing principle,” she said. “It’s an aspiration that we work toward and that we create a world-wide competition over.”

When John F. Kennedy created the space race, Gillibrand said, he didn’t know if he could get to the moon within ten years. He did know that by challenging Russia, he would galvanize the whole country and get to the moon quicker than the Russians would.

“So, why not challenge China to a competition on biofuels and on renewables and see which country has the best engineers and entrepreneurs to get it done?” Gillibrand questioned. “I’ll put America up against anybody. We will win. It’s why you need national leadership. It’s why presidential vision actually matters.”

Senator Gillibrand will look you in the eye when she says, “If you want to get anything done, you just have to tell me it’s impossible and I will get it done.” And you will believe her.

It’s that kind of earnestness mixed with her passion for public service, her compassion for others and her ability to both speak what she thinks and to think before she speaks that make her noteworthy.

For example, Gillibrand defended that Washington Post article about her inability to gain traction in the presidential race during that Sunday evening conversation at the bar in Dubuque.

“I think that I like that story because it tried to give a vignette about sort of who I am and why I’m running and how I’m quite different than the other candidates,” Gillibrand said.

Gillibrand describes herself as “determined.”

In the same way Elizabeth Warren has been called the “candidate with a plan for that” and Bernie Sanders has been recognized as a “revolutionary,” Gillibrand said she wants to be known as the candidate “who takes on the fights that other people won’t.”

And she won’t stop fighting for votes in Iowa anytime soon.

She’s launching an RV tour in August. She said she’s bringing her husband and two sons and they’ll travel to as many towns in the state as they can.

Gillibrand will have plenty of time to gain some ground in Iowa then, so don’t write her off yet.