A bill sponsored by Republican Senator Roby Smith is proposing a wide range of new voting restrictions in Iowa, including ones that would specifically make it harder for students, rural voters, and veterans to vote.

Smith’s Senate Study Bill 1241 seems to take extra effort to make it harder for college students at the state regents universities to cast a ballot. The bill would ban satellite voting at any state-owned building:

That would mean no more early satellite voting options at the University of Iowa, Iowa State University, or the University of Northern Iowa. Those locations are used each year to give students, who often have packed schedules, many extra options to vote that are closer to their dorms or are on campus. Some polling locations that include student populations are off-campus.

It would also mean different rules for different types of colleges. Private schools like Luther College or Drake University could still hold a satellite voting site on their campus. Students who decided to go to state schools, however, could not utilize that option.

However, this provision would also have some unintended consequences. Most notably: places like the Iowa Veterans Home wouldn’t be able to hold an early voting site there if they wanted to.

And it would impact satellite voting locations at places like the University of Iowa Hospitals and Clinics, where many medical professionals and patients take advantage of an early vote option at their work. John Deeth noted that 2,016 people voted at the UIHC site in the last presidential election.

Smith, a senator from Betterndorf, seems particularly eager to target college students in his bill. It also includes a measure that would require universities to provide a form to graduating students that essentially tries to knock them off the voter rolls. It would question whether they plan to move outside of the state after the election, and, if so, it will remove them from the voter registration system. 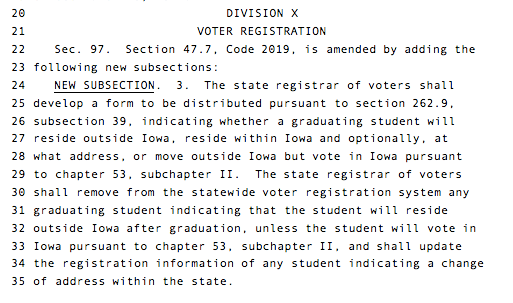 Of course, a student could just as easily move back to Iowa before the November election, or their plans could change, and this would make it a little more difficult to get registered to vote again. No other registered voters in Iowa are targeted in this manner to remove them from the registration list.

Among many other changes, Smith also puts a new restriction on which absentee ballots can be counted. This seems to be in response to the House District 55 election, where a few dozen votes didn’t get counted despite there being bar code evidence they had been mailed on time. Smith takes the punitive approach here, requiring all ballots to be in the county auditor’s office by election day, instead of taking House Republicans’ approach of requiring auditors to use the barcode system, which would likely allow thousands more legally-cast ballots to count.

This change would have a disproportionate impact on rural voters. It often takes more days for the mail service to get from rural areas of the state in to their county seat and the county auditor’s office. Many voters in the Decorah race did not realize their mail gets routed through Waterloo, which is partly why so many absentees sent on time arrived after the election.

It could also easily impact veterans’ ballots who may be sending in their vote from overseas.