Stretching the truth in political ads is pretty run of the mill in today’s campaigns, but State Representative Louie Zumbach of Coggon takes the tactic to an utterly absurd level in his latest mailer.

In a direct mail piece that voters in House District 95 (rural Linn County) received recently, the one-term Republican incumbent pitches his policies as “Moving Iowa Forward.” He also warns that his Democratic opponent, Christian Andrews, would do quite the opposite and “would move Iowa backwards.” Zumbach lists three scary-sounding things next to Andrews’ photo: 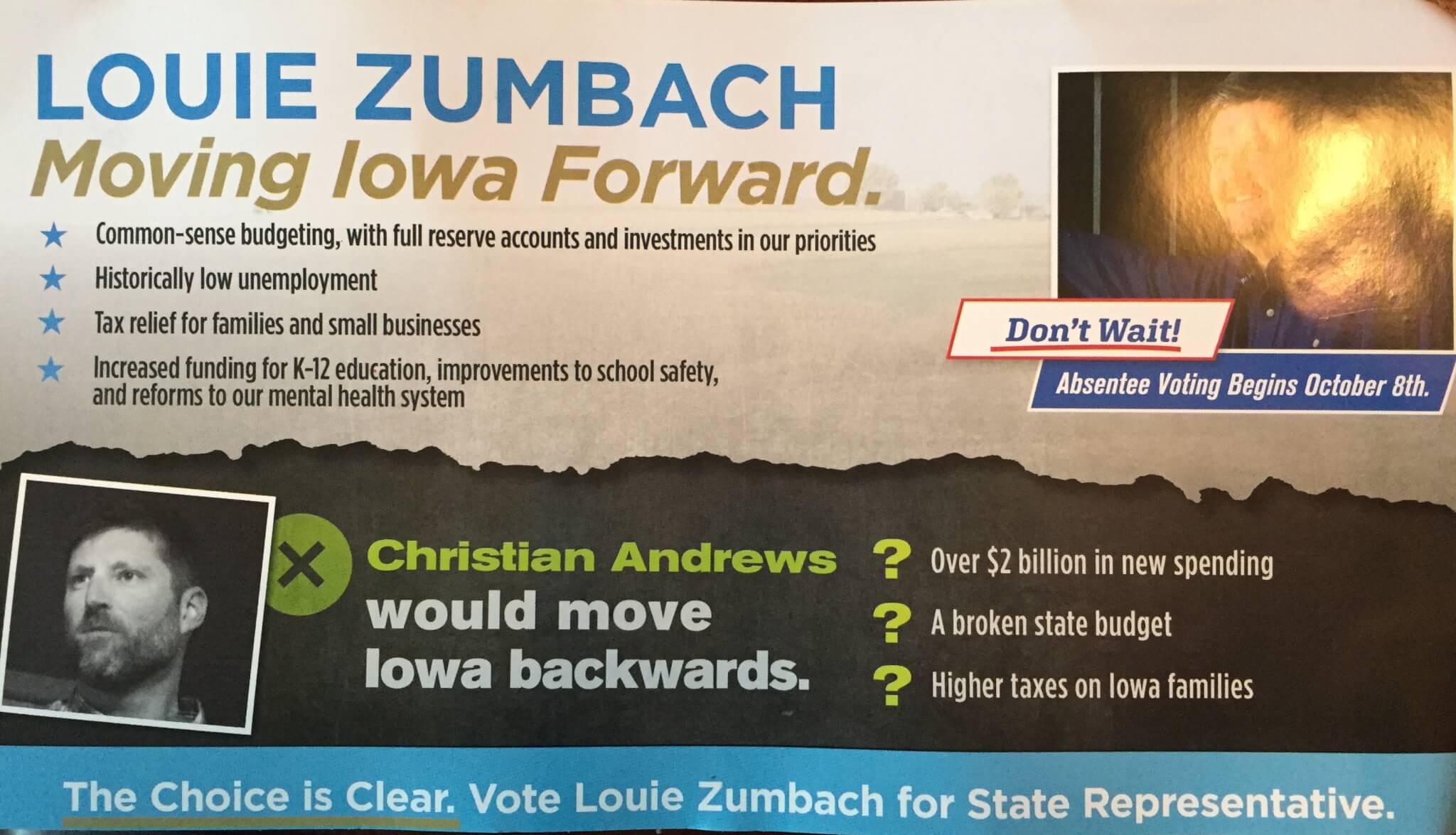 But there’s something very important missing in this particular mail piece: any kind of citations.

Typically, on mailers like this or in TV ads, you’ll see little [1] and [2] footnotes/citations attached to the end of each claim about the candidate’s opponent. Those usually reference specific votes, a news article from a certain date where the candidate was quoted, or a social media post. Even those citations can twist the truth, of course, but it at least gives the voter something they could go look up for confirmation if they so chose.

There’s nothing like that in this Zumbach piece. Which is perhaps why he uses question marks in front of each claim. Maybe Christian Andrews will raise taxes? We’re not sure, but it sure sounds scary if we put it in a mailer! Perhaps Zumbach is a fan of Anchor Man and wishes us to read it as, “Christian Andrews will break the state budget?”

Frankly, this is ridiculous. I worked on a lot of campaigns, including state legislative ones where we had precious little research on our opponents (including Zumbach’s cousin, now a state senator). That makes things difficult. What do you say to voters to dissuade them from voting someone when that person hasn’t taken any votes or given any interviews where they weigh in on where they stand?

The solution many campaigns turn to (both Democrats and Republicans) is to simply cite their opponent’s party platform. There’s lots of weird stuff in both. It’s a weak and rather misleading attack because most candidates haven’t even read the platform, nor is there anything forcing any candidate of a party to adhere to them. But it keeps a campaign from getting sued, so they use it and hope voters will believe the worst.

In Zumbach’s case, tossing in a couple question marks seems to be his way to avoid legal scrutiny. He’s not actually accusing Andrews of holding those beliefs, just wondering if he might.

And where he gets those questions is anyone’s guess. Andrews, a Mount Vernon public works employee who operates bulldozers and digs graves, has never served in the Iowa Legislature. And yet Zumbach is linking Andrews to a “broken state budget.” How?

Zumbach also raises the question of Andrews implementing “$2 billion in new spending.” The state budget is about $7.4 billion. Does Andrews have some sort of plan to increase the budget by 27%? Or does Zumbach look at him and think, “Yeah, Christian Andrews looks a $2 billion kind of man.”

As we enter the final month of campaigning in Iowa, voters can expect to see a lot of questionable ads from candidates of both parties. Voters in House District 95 might want to be particularly suspicious of what Louie Zumbach has to say given his already-shady approach to the truth in his first reelection run.