Some Republican candidates and conservative organizations may continue their efforts to politicize Mollie Tibbetts’ death to advance their immigration views, but not without significant pushback. Some of it is even coming from fellow conservatives.

The local University of Iowa chapter of Turning Point USA announced this morning that they had rejected an idea from the conservative organization’s field director to hold an immigration event on the campus in response to Tibbetts’ death. The executive board also said they were stepping down from their leadership positions in the local chapter and ending their association with Turning Point USA. [Update: several hours later, the group tweeted out that there was a misunderstanding with who suggested the event and apologized to the national group’s leaders.]

“We find it in poor taste to exploit the death of a Hawkeye to suit a political agenda,” the students wrote in a statement. “Should this event go on, it does so without the support of this executive board. Members of this chapter would like time to grieve and mourn the death of their classmate. We are all shocked, hurting, and in need of more respect than what was given to us by Turning Point USA.”

The national conservative organization has come under fire this week for arguments their communication director, Candace Owens, got in with Tibbetts family members on Twitter. Owens had been particularly outspoken online in attacking Democrats over their immigration policies, blaming it for Tibbetts’ death. One of Tibbetts’ cousins responded, and Owens fired back, suggesting who the grieving family member should be mad at. (Update: Owens claims she never reached out to the local chapter about an event, though the group said it was from a field director) 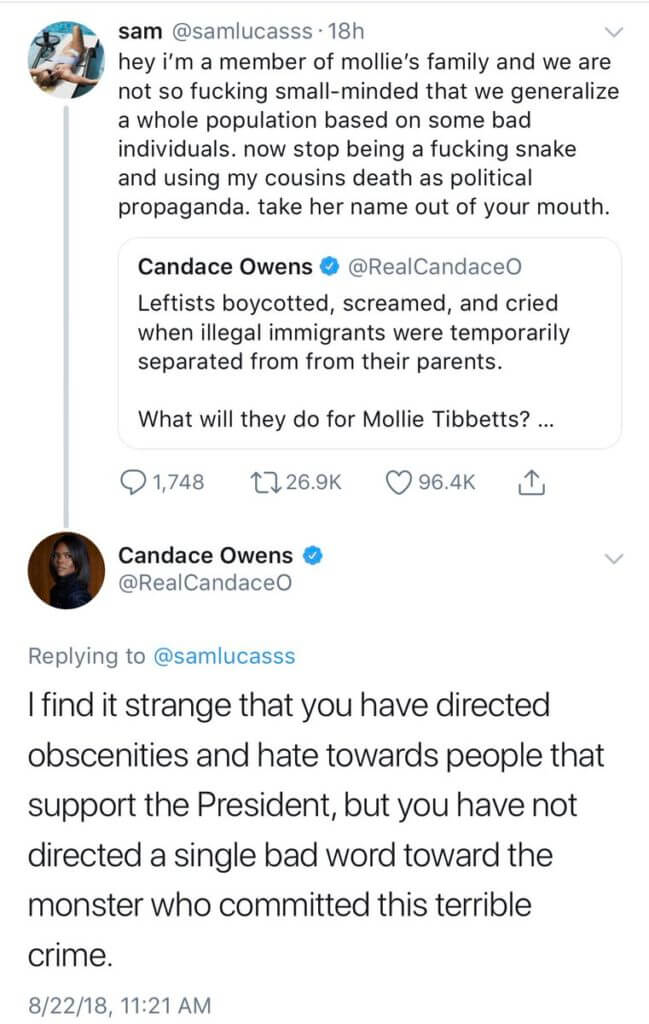 The former student leaders addressed the exchanges in their statement.

“This board also extends sympathy to the member of Mollie’s family that dealt with public harassment from Turning Point USA Communications Director, Candace Owens,” they wrote. “We ask that your exchange with Owens represent only herself and not conservatives as a whole.”

Turning Point USA is a conservative organization formed back in 2012 and funded by a billionaire Republican donor. It has several hundred college chapters across the country and holds national training events to support young conservatives. They have faced accusations of racial bias on some campuses and were initially rejected when they tried to form a group at Drake University.

The University of Iowa students said that they understood the organization “would focus solely on fiscal issues” when it was formed, and many of their past events on campus revolved around government spending.

“Our chapter does not take responsibility for statements made by Turning Point USA regarding immigration or other social issues,” the statement read. “With that being said, executive board members have stepped down from their positions and association with Turning Point USA.”

It’s not yet clear if the national leadership of Turning Point USA will try to hold an immigration event on campus in response to Tibbetts death, but causing the dissolution of their local chapter likely wouldn’t help the event’s success.

Meanwhile, other signs of the right looking to turn Tibbetts’ death into a immigration battle are starting to surface. A poll was in the field the day after news of Tibbetts’ murder was announced, testing false lines of attack about Democratic 3rd Congressional District candidate Cindy Axne and positions on ICE.